When my editor suggested a Father’s Day story written by a dad about his son, I was sold immediately. I’ll be glad to brag, but my son Tyler’s accomplishments as a chef speak for themselves. Of course, I’m a bit biased and overly impressed with my son’s young resumé of work, but so are some of the top culinary names in the industry. Chef Tyler Upton’s hands are heavily tattooed – something that has become a bit of an industry standard – and grip his knife with precision, function and form. Typeface spread across his fingers reads “until the very end,” his homage to Harry Potter. I don’t have any tattoos myself, but I’m OK with his – there’s a fox on the top of his left hand, and I still don’t know what that is all about. His right hand balances his blade while he skillfully slices through a root vegetable as we prep a meal in my kitchen.

“You hold it like that,” Tyler says, noticing my rigid grip on the handle of my knife, “and you’re gonna wind up with carpal tunnel.”

The apprentice has become the master. “Tyler has the drive to get after it, rather than letting it come to him,” says Chef Michael Lee Rafidi, Executive Chef at Arroz at the Marriott Marquis in Washington, D.C. “He will prove himself and earn it, [because he] shows respect for the craft. I hired Tyler based on his attitude, offered him a cook position with intention to be a sous chef. I knew he was ready for a sous chef position, but we didn’t have it available.”

It took only a few months for him to reach the sous chef position at Arroz, one of the newest bright spots in the capitol area’s burgeoning food scene. Washington D.C. is the most recent U.S. city to achieve Michelin Star rating, following Chicago, New York and San Francisco. Arroz was nominated for a New Restaurant of the Year RAMMY Award (Restaurant Association of Metropolitan Washington), often called the “Oscars of food,” and Chef Rafidi was nominated for the RAMMY Rising Star Chef of the Year. The restaurant focuses on contemporary flavors of southern Spain and Morocco. The gig is kind of a big deal – but one just taken in stride – for Tyler, a 2009 Garden Spot High School graduate who grew up loving cooking shows, Pokemon and movies.

“I think Food Network inspired me to take an interest in food,” says Tyler, who watched Iron Chef America and Molto Mario religiously. “My interest in food began as I became introduced to what food could be. I grew up in a time of convenience foods. It was heat, add, eat. As I grew older and met more of my family, I was introduced to what food could be. From that moment, I knew I wanted to cook.”

Setting his sights on that goal, Tyler enlisted in the U.S. Navy (following in his father’s footsteps) as a Gunner’s Mate to earn money for college. After four years of active, honorable service, he headed to Hyde Park, New York, where he was accepted into the prestigious The Culinary Institute of America. After graduating in 2016, Tyler moved to the Big Apple, where he could gather experience with notable chefs and at legendary eateries. “I worked with Mario Batali a little bit in New York City. I helped open up La Sirena before I decided to move on to other projects,” says Tyler. Located in the Chelsea Maritime Hotel, La Sirena is a joint venture between celebrity chef Batali and restaurateur Joe Bastianich (MasterChef). Tyler, like many budding chefs, has rendered his services to several different restaurants in a short period of time. He went on to work at the hip Maison Premiere in Brooklyn, and while in New York staged – a sort of culinary apprenticeship/display of skills – at Le Bernardin, The Dining Room at The Metropolitan Museum of Art, and Atera.

Closer to home, Tyler staged at Fork in Philadelphia before moving back to Lancaster County. During his short return, Tyler could be found experimenting with the menu at St. Boniface Craft Brewing Company in Ephrata and creating plates at The Inn at Leola Village, which is home to TE, the only Forbes 5 Star restaurant in the county. Before accepting his current position at Arroz, Tyler staged at two D.C. restaurants owned by José Andrés, Pineapple and Pearls and Oyamel.

“In the hospitality industry, D.C. is one of the fastest growing areas. It seemed like a great place to further my career. D.C. is going through a gastronomic renaissance,” says Tyler, something Lancaster City can relate to.

“I like to find projects that can be any cuisine or ethnicity and attack it and perfect it. I don’t have a specific cuisine I am focused on currently. If a dish seems interesting to me, I investigate it.” – Tyler Upton Sous Chef, Arroz, Washington D.C.
In a way, he is just following his roots. He sees big city restaurants and chefs using a lot of products from Lancaster County. Eggs, chicken and vegetables top the list of Amish country items in demand in major metropolitan areas. It’s a trend he first noticed in New York City, noting that vegetables are the one thing he would like to use more often. “The consumer is becoming more conscious of where their food comes from, as well as how it’s treated,” says Tyler, who is not a vegetarian but sees veggie-centric food as an upcoming and welcome trend. “We should expect our proteins to become a backdrop to a more vegetable-centered meal. We need to focus more on vegetables as a country, as a world.”

The kid – I call him a kid … he’s 27 – loves beets. In his words, they are “versatile, earthy and the perfect representation of something delicious that can come from out of the ground.” He loves beets so much that his newest tattoo is a life-like portrait of the taproot and leaves running the length of his arm. I’m definitely OK with this.

“I like to find projects that can be any cuisine or ethnicity and attack it and perfect it. I don’t have a specific cuisine I am focused on currently. If a dish seems interesting to me, I investigate it.” – Tyler Upton, Sous Chef, Arroz, Washington D.C. 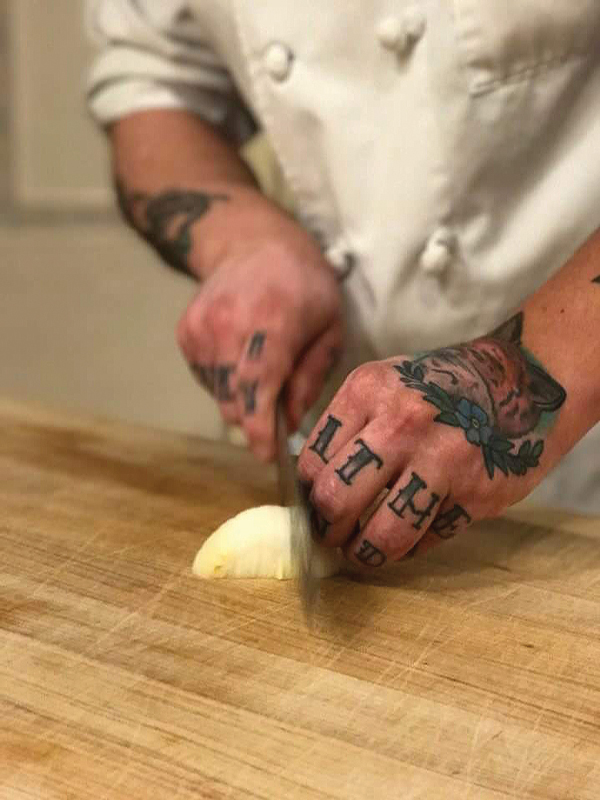