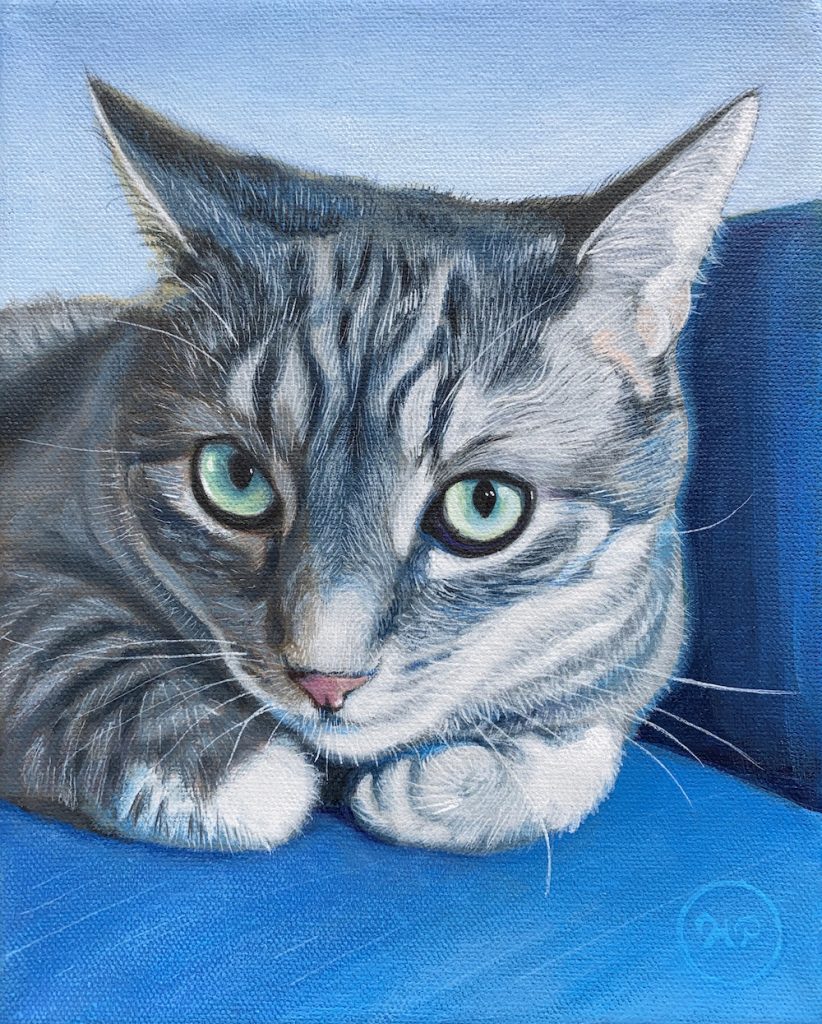 3rd Annual We Love Our Pets

3rd Annual We Love Our Pets: An abbreviated version of our annual art exhibition to honor Charles E. Gaul II & Milo, and to benefit The Sebastian Foundation
Planning a large scale group exhibition during an unpredictable pandemic didn’t seem ideal, but skipping a year felt equally impossible, so Mulberry Art Studios compromised by curating a small and sweet collection of pet related art by three artists who have participated in both of the previous Pets exhibits: Scott Hggins, Jill Brinser, and Marion Weachter.
The idea for We Love Our Pets grew from the love of one dog, Milo. Milo was rescued when he was a few years old, and belonged to the nephew of Mulberry Art Studios’ owner, April Koppenhaver. After he developed arthritis and needed assistance with stairs, April offered to care for him. He became a bit of a mascot for Mulberry Art Studios, as he spent each day there by April’s side. “Milo was an absolute gem!” recalls April, fondly. “He greeted all of our guests with his friendly warm tail wag or thump of the tail on the floor and his big brown eyes shining brightly. He would then proceed to go to our office and begin snoring,” she laughed. “Milo explored every direction on his walks in the city of Lancaster. He never lost his sense of curiosity and was ALWAYS acknowledged by pedestrians as such a beautiful, friendly dog.” April’s husband, Charlie, always said Milo looked like he was smiling. Charlie happily welcomed Milo into their home, saying, “Milo is such a good dog. He really is no bother.” At age 92, Charlie really enjoyed Milo’s company. “I often thought Milo was as much of a blessing to Charlie as Charlie was to Milo,” says April.
Sadly, in November 2018, Milo died at age 16. Less than two months later, 93 year old Charlie passed away. As a tribute to these two wonderful beings, both so central to her life, April decided to honor their love with a show inspired by their memory. “Our pets and our partners make a profound difference in our lives and we wanted to raise money for an organization dedicated to bringing pets and people together,” explains April.
Donations will be accepted on First Friday, and throughout the month of May, to support local nonprofit organization, The Sebastian Foundation. Founded in 2004 by Amy Garrety, The Sebastian Foundation works tirelessly to facilitate the adoption of unwanted animals, offering a second chance to pets who have been surrendered due to circumstances outside of their control or who have ended up in high kill shelters. As they state in their mission statement, the Sebastian Foundation believes that, “Through education and awareness of the welfare of animals and a commitment to compassion toward other living beings, our world becomes a better place for everyone.”