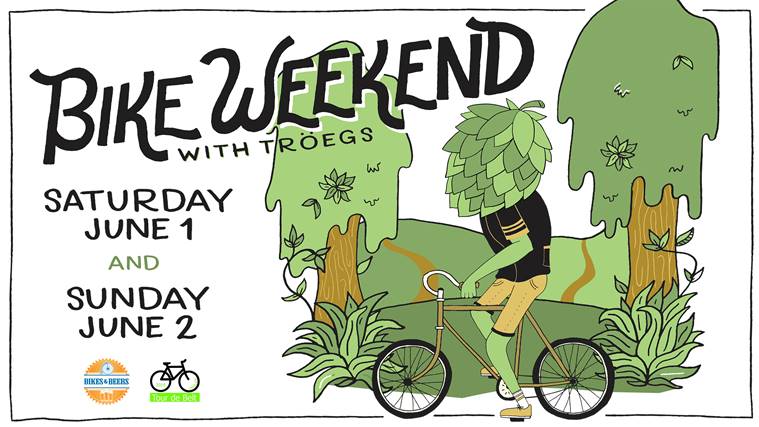 Tröegs Independent Brewing announces “Bike Weekend,” a series of two back-to-back community bike rides taking place over the weekend of June 1. More than 1,800 cyclists are set to participate in the two rides, each of which benefits the Hershey/Harrisburg region.

Bikes & Beers returns to Tröegs Brewery for its second consecutive year to benefit the development of the Jonathan Eshenour Memorial Trail, which currently spans 13.5 miles through Derry Township and provides access to parks, neighborhoods and commercial establishments. Riders of all skill levels will participate in a 15-, 30-, or 45-mile route, all beginning and ending at Tröegs Brewery. Each course will traverse the greater Hershey area and include pit-stops along the way offering snacks for participants. A portion of registration proceeds will benefit the Jonathan Eshenour Memorial Trail, which eventually plans to connect with Tröegs Brewery.

After the ride, participants will enjoy a variety of Tröegs beer, food and fun at the official after-party at Tröegs Brewery. The event will feature live music and food trucks, plus a raffle for a chance to win a brand-new bike, restaurant gift certificates and a variety of cycling gear.

Bike Weekend continues on June 2 when the 19th Annual Capital Area Greenbelt Association (CAGA) Tour de Belt returns to Harrisburg. The ride, which begins and ends at HACC’s Harrisburg Campus, helps raise funds to preserve the Greenbelt. Cyclists will follow the 20-mile Greenbelt, a century-old system of parks and open spaces regarded as “Harrisburg’s natural treasure.” Participants will experience many improvements to the Greenbelt, including safer trail crossings at busy intersections and many newly paved portions. The ride kicks off at 10 a.m.

Following Tour de Belt, all participants, volunteers and friends are invited to Boro Riverview for Tröegs drafts and complimentary appetizers. For every Tröegs draft sold, $2 will benefit CAGA.