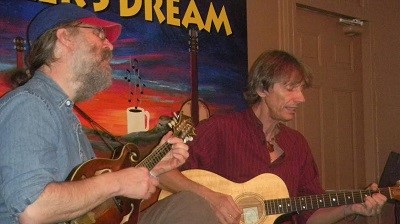 London-Irishman Jamie O’Brien performs songs from his eclectic repertoire, featuring many from Ireland and from Hawaii. Before moving to Arizona in 2006, he lived in Pennsylvania for almost 20 years and currently performs regularly throughout the Mid-Atlantic States, the South West and Hawaii, and also tours frequently in Canada and Europe.

He includes songs he learned at hooleys (family gatherings) from parents, grandparents and other relatives, along with others he picked up from fellow Irish musicians on his journey through Europe and across the Atlantic to the US. He has also traveled across the Pacific to Hawaii where he collaborates frequently with Island musicians – the songs he learned from them have now become part of his musical life.

Jamie sings and plays guitar and ukulele and is joined by long-time collaborator Henry Koretzky on vocals, mandolin and mandocello.

Henry Koretzky, from Harrisburg, PA performs an eclectic mix including bluegrass, swing, country and more. An in-demand musician, he sings and plays mandolin, mandocello and guitar as a solo performer, accompanist and band member (the Launies, Sink or Swing, the Harrisburg Mandolin Orchestra and more).

Together, the musicians present a wide-ranging selection of songs and tunes from styles found on both sides of the Atlantic, accompanied by informative and humorous descriptions of the material.