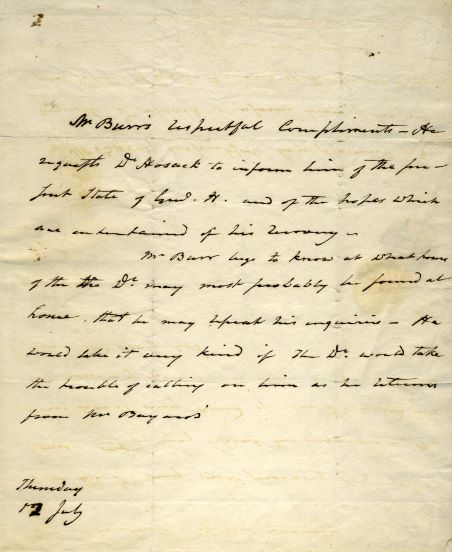 Hamilton and Burr: Who Wrote Their Stories?

The hit Broadway musical Hamilton sparked renewed interest in the Founding Father and his relationship with Aaron Burr, whom he infamously dueled with on July 11, 1804. Opening on the 215th anniversary of the duel, our exhibit picks up where Lin-Manuel Miranda’s musical left off and examines how Alexander Hamilton’s and Burr’s legacies were shaped by other Founding Fathers, a wife, a daughter, historical documents, and yes, even an enormously successful, modern-day musical.

The continuously interwoven fates and legacies of these two seemingly divisive figures provide an exciting opportunity to explore what stories get written, which get remembered and why.

Our story begins in the immediate aftermath of the shots in Weehawken, New Jersey, with original correspondence between Burr and Dr. David Hosack regarding Hamilton’s condition. An up-close look at Dr. Hosack, Rev. Benjamin Moore, and the events following the duel will begin to complicate our perceptions of Burr.

The exhibit then dives into the printed material and imagery surrounding these two figures to consider the ways in which Burr’s daughter, Theodosia Burr Alston, and Hamilton’s widow, Elizabeth Schuyler Hamilton, helped shape the print culture to craft legacies of both men.

Setting the scene is an 18th-century velvet coat, similar to the one that inspired Miranda’s vision for the musical—which serves as a reminder that historical narratives can always be re-explored, reconsidered and rewritten.