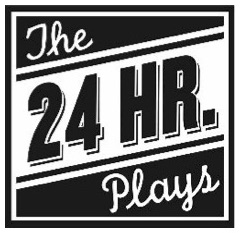 Creative Works of Lancaster announces a special night of theater. This is the ninth year for The 24 Hour Plays: Lancaster, a project that has inspired 62 new works and has brought hundreds of local and regional theater artists together.

Six writers, six directors, 25 actors and one production team will write, rehearse and perform six short plays in a 24-hour period. The process begins Friday evening, October 4, with writers choosing actors from a pool of talent. The six writers work through the night and hand their work to directors early Saturday morning, October 5, the day of the performance. After negotiating for their choice of play, directors, along with their play’s actors and a crew of stage technicians, prepare for the 7 p.m. performance.

Since its inception in New York City in 1995, The 24 Hour Plays (www.24hourplays.com) have been performed for audiences throughout the United States and the world – attracting both professional and amateur theater artists. The upcoming Lancaster production will feature veteran members of the Central Pennsylvania theater scene working alongside artists who may be new to the audience.

Creative Works is thrilled to announce that this year’s The 24 Hour Plays: Lancaster will debut the organization’s brand new ticket pricing structure: Pay What You Decide (PWYD). Originated by ARC, Stockton Arts Centre in the United Kingdom and first brought to America by Azuka Theatre in Philadelphia, PWYD is an exciting frontier for the Lancaster theater community. While Pay What You Can pricing asks patrons to pay for a show before they see a performance, and is traditionally used as a limited-time promotional offer, PWYD allows patrons to reserve their tickets ahead of time and pay after the performance. Creative Works intends to continue using this pricing model for all of its future events. PWYD allows all patrons to assess what the value of a performance is for them individually and removes the risk of spending money up front on a new performance they might not traditionally attend with a traditional ticket pricing structure.

With the introduction of PWYD Creative Works will never turn away a potential audience member due to financial limitations. All tickets are free to reserve, and there is no obligation, or suggested minimum, to pay. Tickets can be reserved through the Creative Works website: creativelancaster.org. Reservations are highly encouraged as The 24 Hour Plays: Lancaster  has sold out multiple years. Availability may be limited at the box office on the night of the performance. There will be only one performance of the plays.

Pay What You Decide