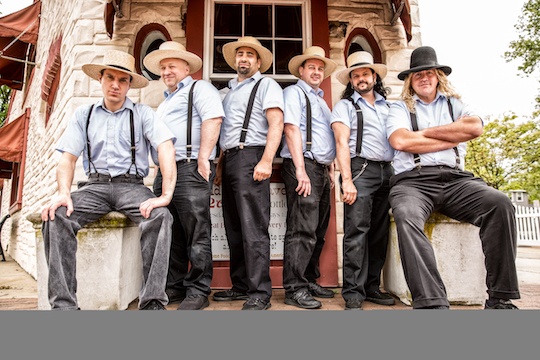 The Amish Outlaws at the Chameleon Club

The massively-successful party band The Amish Outlaws will be proving that home is where the heart is when they perform their all-ages homecoming show at The Chameleon Club. With half their members born and raised under a strict Amish upbringing in Lancaster, this much-anticipated performance marks the first time that the six-piece band will take the stage at the famed music venue.
The Amish Outlaws, who were featured as a “Top Entertainment Pick” by New York Magazine, pay homage to its three members’ Amish roots while modernizing each set with songs that continually evolve to reflect the times. While there is no “typical” Amish Outlaws show, one can expect to see six men in full Amish garb releasing all of their pent-up energy with an infectious joy. In essence, The Amish Outlaw gigs are less performances than they are initiations into the life of an Amish Outlaw and his celebration of the English world.