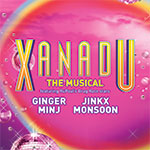 XANADU, the hilarious roller-skating musical adventure hailed as “the most fun you’ll have on Broadway” (The New Yorker), returns in a national tour with some fierce new twists! XANADU follows the beautiful Greek muse Kira as she journeys from the heavens of Mount Olympus to Venice Beach, circa 1980, on a quest to inspire scrappy artist-on-the-rise Sonny to achieve the greatest artistic creation of all time – the first ROLLER DISCO! But when Kira stumbles into forbidden love with Sonny, a mere mortal, her salty sisters (RuPaul’s Drag Race stars Ginger Minj and Jinkx Monsoon) take matters into their own hands.

Based on the 1980 cult film starring Olivia Newton-John, the Tony Award-nominated musical features all new skate choreography by Olympic sweetheart Adam Rippon and an original hit score by pop-rock legends Jeff Lynne (Electric Light Orchestra) and John Farrar. XANADU is a crowd-pleasing, feel-good bop of a technicolor musical that has audiences jumping out of their seats in tongue-popping bliss! “If you can’t beat ’em, slap on some roller skates and join ’em” (The New York Times).