When Dwight Graybill was given the assignment of razing the buildings on the farm where he grew up, he asked that payment for his services be made with the building materials he would salvage. Now, those materials are being used in projects all across Lancaster County.

The story begins in 1732 when Peter Bruegger (Bricker) and Margaretha Roesti emigrated from Bern, Switzerland, to the Cocalico Valley of Lancaster County. The Brickers welcomed five children to the family, including their youngest son, David Bricker (1755-1833), who came to own approximately 70 acres of land on the outskirts of what is now Denver. In 1801, he built a bank barn on his property and a farmhouse a year later.

In the late 1800s, the farm came to be owned by Isaac K. Overholser, who rebuilt the barn in 1901, plus added other outbuildings to the property. It was later owned by George Rutt.

Across the road was the Graybill Farm, where Dwight’s father, Donald H. Graybill, grew up. When he married Dwight’s mother, Mary Jane, in the ‘60s, they bought the original Bricker farm at auction. A third Graybill-owned farm joined the mix, and a business enterprise called Triple G Farms was born. Together, the farms raised corn, alfalfa and steers.

Milk and other dairy products were also produced. The Graybills were ahead of their time, as they operated a store that employed a “buy fresh, buy local” philosophy decades before it became a movement.

The farms were playgrounds for Dwight, his siblings and their cousins. “We were all over those barns as kids,” Dwight recalls. One barn was even outfitted with a basketball court, which may have played a role in Cocalico High School winning the state title in boy’s basketball in 1977. A massive snowstorm canceled school for a week, meaning the team couldn’t practice. The Graybills plowed a path to the barn, enabling the team to get in their needed practice time leading up to the play-offs. “We like to think we helped them win the state title,” Dwight remarks.

The Graybills were avid golfers. “I bet you can still find golf balls in the fields around here,” Dwight says. Their love of golf inspired Dwight’s uncles, Art and Irv Graybill, with the idea of building a golf course. Foxchase Golf Club was built on land that was once the “home farm.” Today, Dwight’s cousins, Steve and Doug, operate the business.

The farm on which Dwight grew up was ultimately sold after the untimely death of his father at age 46. Three years ago, the farm’s current owner asked Dwight, who has owned Cocalico Builders for the last 20 years after buying it from founder Gerald Phillips, if he would be interested in razing the buildings – a barn, six outbuildings and the farmhouse – as he wanted to develop the tract of land. Dwight jumped at the opportunity to “reclaim” the buildings. As recycling plays a major role in the building and remodeling projects he undertakes, he saw gold in the materials he could salvage and reuse. 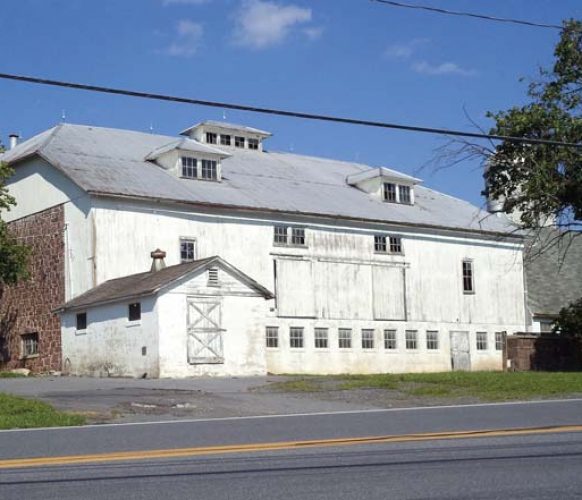 The original Bricker farm was purchased by Dwight’s parents at auction soon after they were married in the ‘60s. The property, which is located on the outskirts of Denver, was home to a large barn, numerous outbuildings and a farmhouse. The barn was rebuilt in 1901 by then-owner Isaac K. Overholser. Sandstone comprised a portion of its walls. Sandstone also formed the foundations of many of the buildings on the property. 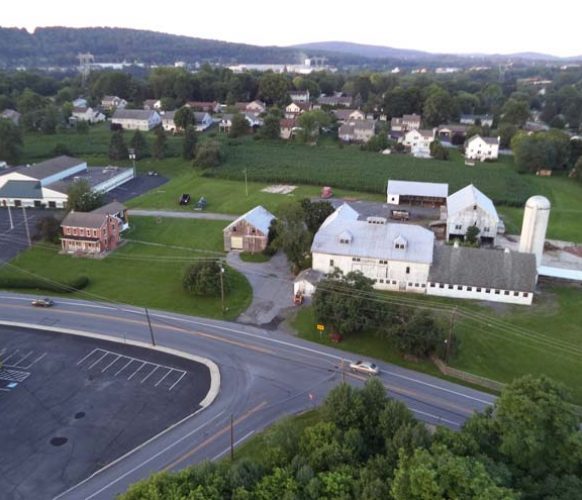 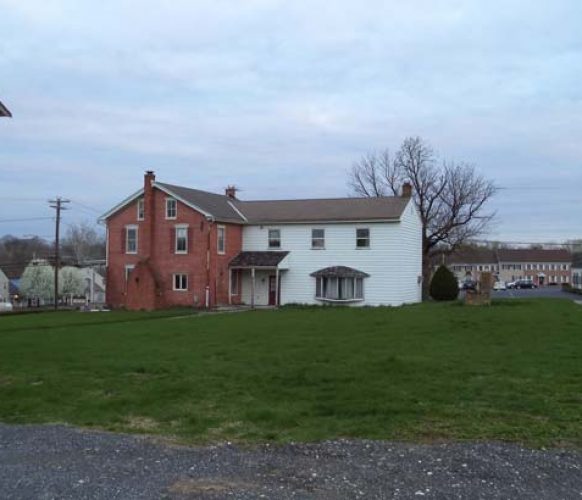 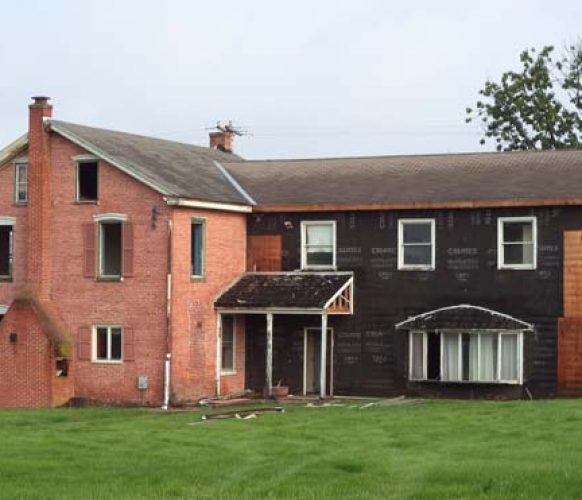 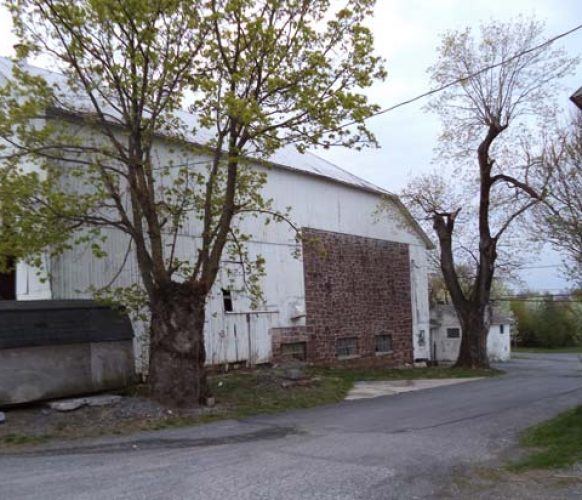 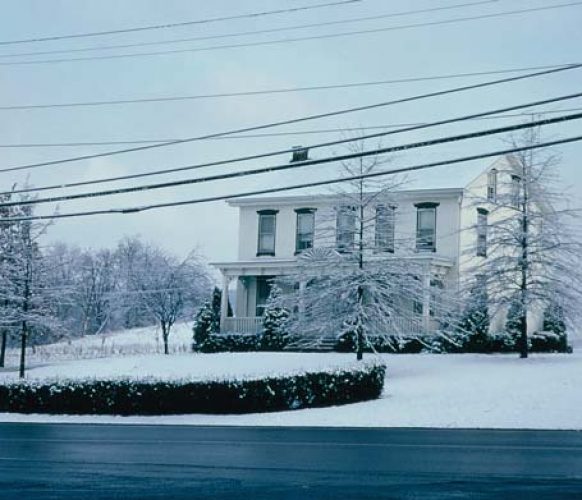 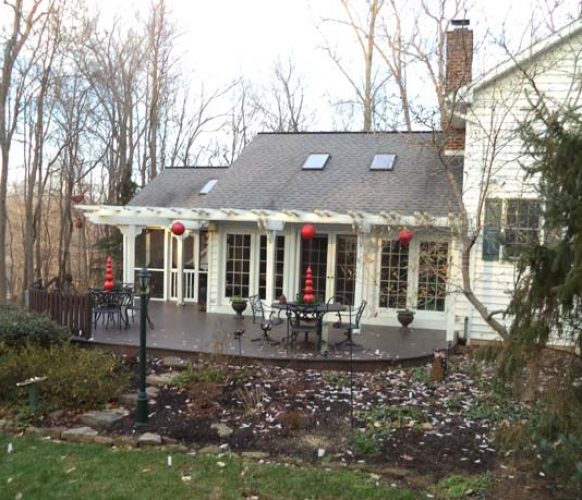 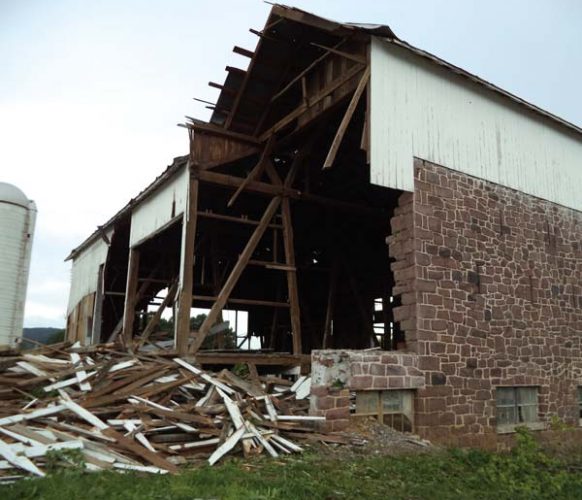 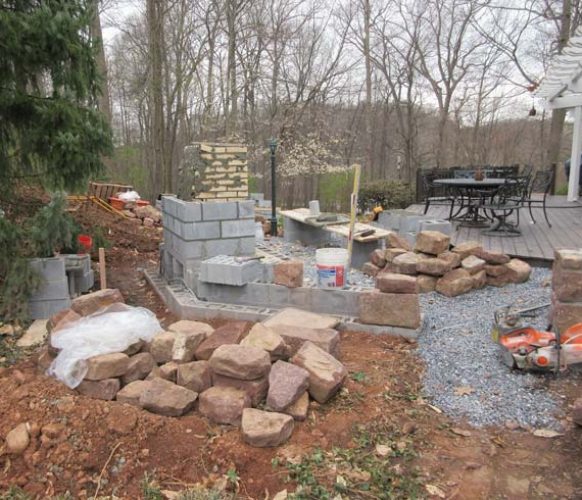 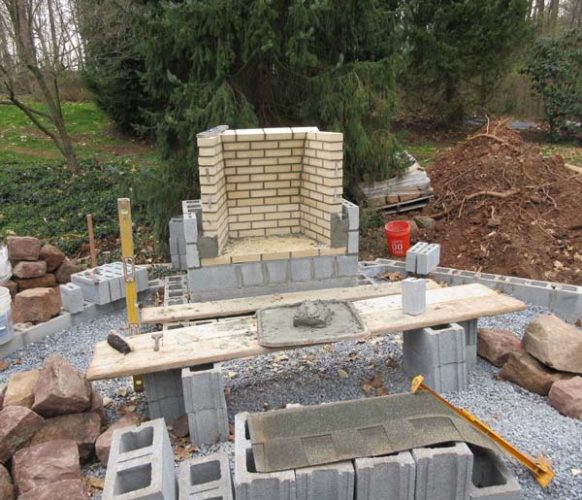 “We salvaged all the lumber and the tin, plus I kept all the hardware,” he explains. Mortise-and-tenon posts (one of which bore the initials I.K.O.) were also salvaged. He sold the brick from the farmhouse to Drohan Brick in Mount Joy. “They don’t make brick like that anymore,” he remarks.

However, what interested him most was the sandstone that served as the foundation for the various buildings, plus formed several walls of the barn. “Sandstone is natural to this end of the county,” he says of its significance. Everything was hauled to his salvage yard in Reinholds to await new uses.

“It’s neat to know that part of me will always be around,” Dwight says of his efforts to recycle the farm where he grew up. “I like that it didn’t go far.”

Two years ago, Dwight received a call from former clients Ash and Trinell Fichthorn. “I used to hit golf balls into what is now their yard,” he says of the subdivision in which they live. Ten years earlier, the Fichthorns had Dwight build an addition for their home and install a small patio. Now, they were interested in expanding that patio. “Ash wanted a deck with a fence around it,” Dwight recalls. “But, Trinell and I had other ideas.” Dwight thought of his stash of recycled building materials and began designing an outdoor-living area that would more than triple the size of what they presently had. 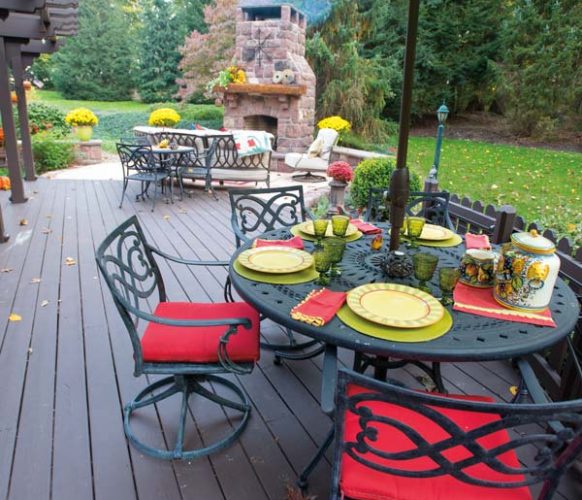 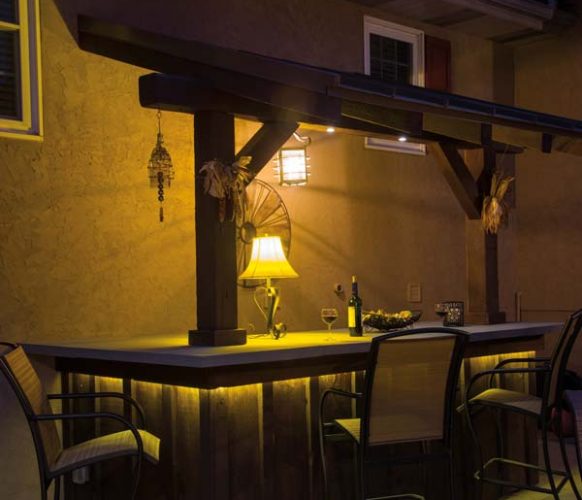 A bar was created from barn boards and battons. 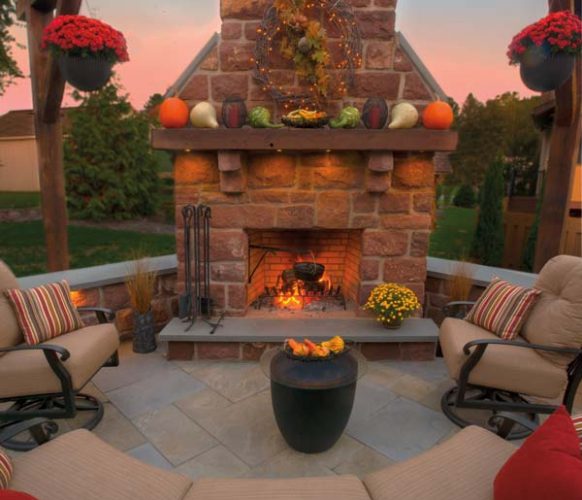 Sandstone was used in the design for the fireplace and sitting walls. 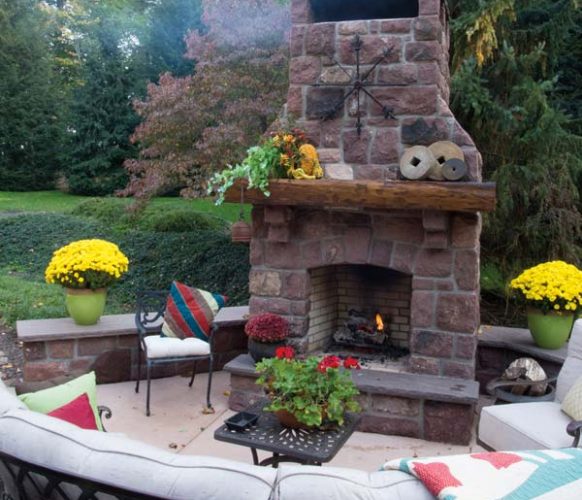 A concrete pad expanded the deck and provides a sitting area whose focal point is the fireplace that Dwight designed using sandstone from razed farm buildings. 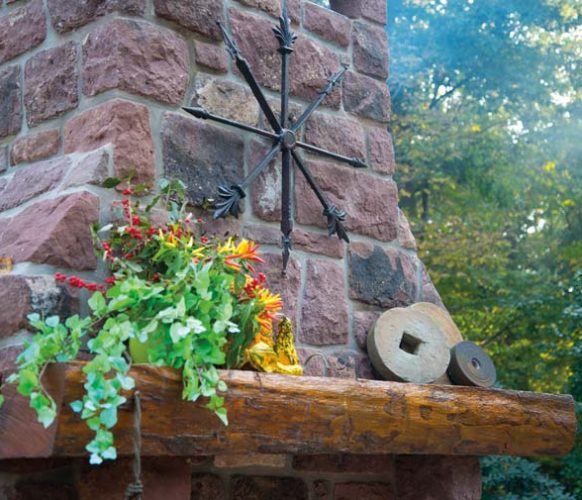 The mantel (also taken from the farm) is decorated with millstones and a metal sculpture that was created from pieces of an old iron fence. 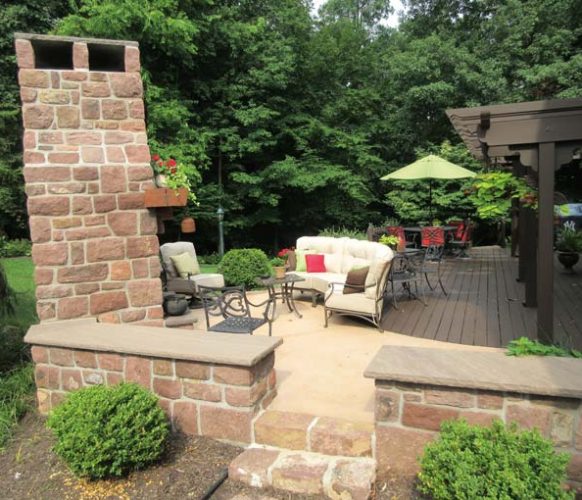 The sandstone became an integral part of the design, as it was used to build the fireplace and sitting walls. Barn boards and battons comprise the bar. Pennsylvania blue slate covers the floor, tops the sitting walls and accents the fireplace. Mortise-and-tenon posts provide what Dwight calls the “architectural flair,”  as they were modernized with the addition of puck lights. “Lighting is key to outdoor-living areas,” he says. The family has so enjoyed the space that “now, they’re talking about covering the sitting area,” Dwight reports. 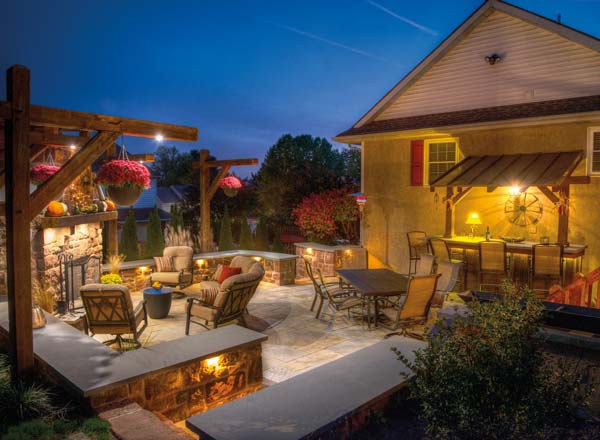 Sandstone and mortise-and-tenon posts from razed farm buildings, as well as other recycled elements, were used to create an outdoor-living area for clients who live just a golf-ball-drive away from the farm where Dwight Graybill grew up.