Owners Jim Rutolo and Mariella “Gracie” Volker describe their Leola restaurant as an “upscale diner.” According to Jim, “We don’t fit into a traditional restaurant category; we’re a hybrid of all things we love about the restaurant business. We serve breakfast all day and have some traditional breakfast items like a diner does, but there’s way more than that on the menu. Plus, we use as many local ingredients as possible while trying to maintain a reasonable price.” Both Gracie and Jim have backgrounds in the restaurant industry. A Lancaster native, Gracie’s childhood home was above the ice cream parlor and sandwich shop her parents operated. After graduating from Westminster College with a degree in history, she found her way back to Lancaster County, managing a small café and bakery in Strasburg before opening the restaurant with Jim in 2013. She’s also no stranger to the Leola area, having spent time over summer vacations on a family farm outside of Leola. Growing up outside of Reading, Jim set his sights on becoming a chef at the age of 5. He entered the culinary program in high school and at 16 was running the kitchen at a local restaurant. His experience spans from casual bistro to fine-dining restaurants. He owned several pizza shops, but longed to get back into the kitchen. By then, he and Gracie were married, and they decided to open a restaurant together. The dream came to fruition in 2013 when they opened Gracie’s. The Leola building’s sense of history and character captivated the couple. “We’re both history nuts, and this is a very interesting building,” Gracie says, explaining that its front has the look of a home, but the rear is divided into several rooms. “One of the neat things about this building is that there are a number of smaller rooms that we can renovate and open as we grow,” Jim says. At one time, the building housed a bakery business operated by the Cooper family, and over the years it was home to two kitchen firms and a number of restaurants.
Gracie’s seats 120 in three dining areas. One of the hallmarks of its décor is the chalk-paint walls, which Gracie has filled with artwork and quotes she’s collected over the years. While most of the art is Gracie’s work, there is a small area in one of the dining rooms where kids can draw. “I want people to feel fed, not just in their bellies, but also in their soul,” she says with a smile.
One of the dining areas also doubles as event space. It has a bit of an industrial feel with a soaring ceiling that ends in a skylight; strings of lights crisscross the room lending a festive feel. The room also boasts several of the seven repurposed (and padded) church pews that serve as seating throughout the restaurant. While it’s a great space for a private party, Jim notes that it isn’t large enough for a wedding reception. Instead, it’s better suited for bridal showers or rehearsal dinners. The menu features a wide range of items. If you’re a fan of bacon, Gracie’s is your kind of place. There’s an entire bacon menu, and Jim says there are seven different varieties of bacon available, including Irish bacon, caramelized brown-sugar bacon and a local hardwood double-smoked bacon. Guests can even indulge in a bacon sampler. Bacon also accounts for one of the restaurant’s top-sellers – triple bacon BLT, which features three varieties of bacon. Bacon jam is made in-house.
Gracie’s also offers an entire grilled-cheese menu. This is comfort food with a twist that includes bacon jam grilled cheese, extra cheesy grilled cheese (made with three types of cheese and house-made cheese sauce) and pulled-pork grilled cheese (pork is smoked in-house as is ham, chicken and crab cakes). There’s even tomato soup to accompany the grilled cheese sandwiches – here it’s tomato basil bisque. Soups are made fresh daily.
The menu also features salads, cold sandwiches and a variety of locally made chips such as Hawaiian BBQ, sweet potato and cracked pepper. Entrées such as Gracie’s meatloaf, chicken & waffles and shells & cheese (meat toppings are available) are offered on the dinner menu. Jim says spicy hash is the top seller. That’s not all – there’s also a weekend brunch menu.
Gracie’s has an in-house baker, who creates taste-tempting desserts such as maple bacon walnut pie and six degrees of chocolate cake. Custom-ordered cookie trays, pies, cakes and cheesecakes are also available. (Wedding cakes are not on the bakery’s menu.)

Gracie’s is also a place to celebrate special occasions; a themed seven-course tasting menu is offered on Valentine’s Day, while a special Sunday brunch is held on Mother’s Day (reservations are required for both events). Although Gracie’s does not have a liquor license, it welcomes BYOB, plus a BYOB cocktail menu is available.
On-site catering for private parties is available; the minimum is 10 people, and a 24-hour notice is required. Again, the menu offers a twist – how about a chili bar!

Gracie’s on West Main is located at 264 West Main Street in Leola. Hours are Tuesday through Saturday, 7 a.m.-9 p.m., and Sunday, 8 a.m.-3 p.m. Reservations are suggested for weekend dining. Call 717-556-0004 or visit gracieslancaster.com and Facebook. 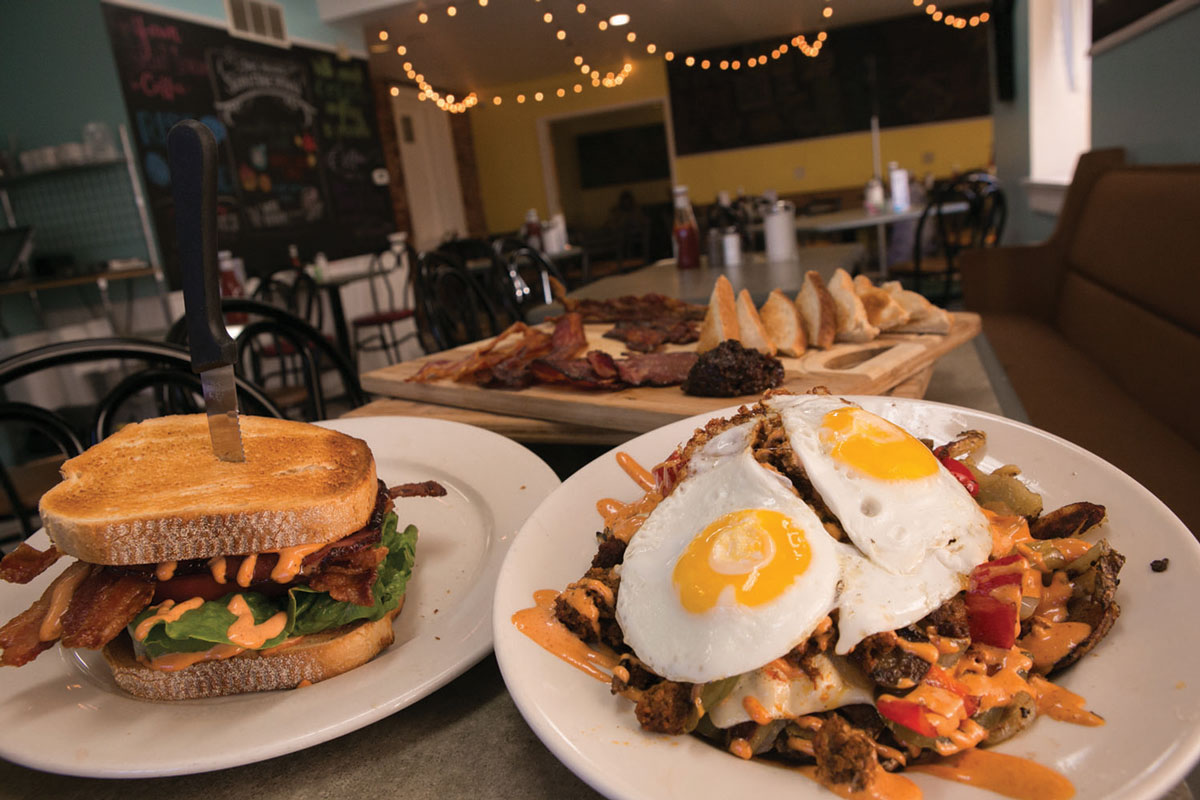