Just because summer is over doesn’t mean the party has to move indoors. At Tobias S. Frogg, the patio stays packed well into the waning days of autumn. The restaurant’s celebrated Halloween party has become the highlight of the fall season. 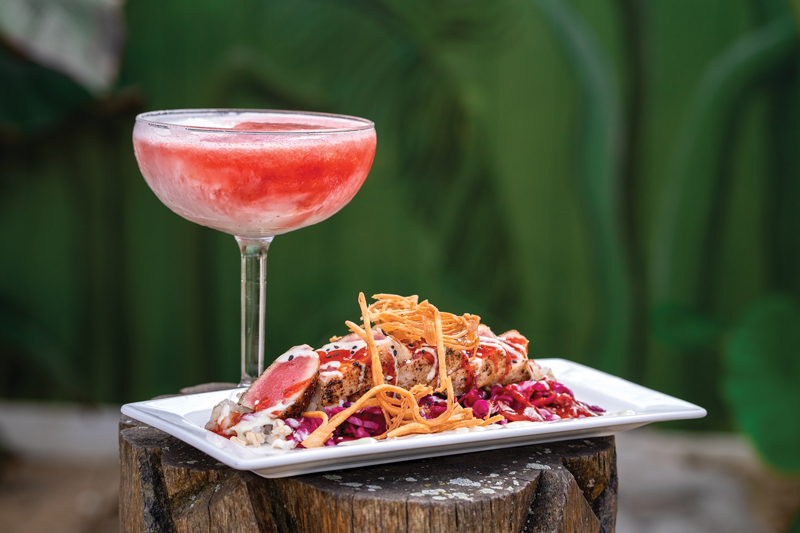 The area is festively decorated with pumpkins, ghouls, goblins and even a “cemetery.” The firepits provide an eerie glow, and the waterfall adds to the festive atmosphere. Party-goers are encouraged to come in costume, and they do. “The costumes are pretty amazing – some are really elaborate and look like they could be in a movie; others are really creative. Halloween used to be an event for the kids, now it’s become an adult event, too,” Jeff notes. 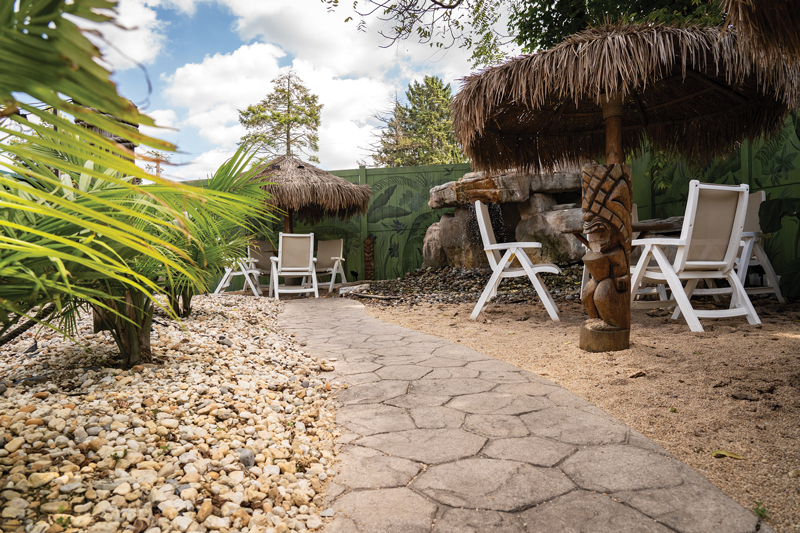 The DJ, who is on-hand to provide music, also serves as the emcee for the costume parade. The costume contest features several categories and is judged by Jeff and two “regular” customers. Prizes this year will include tickets to an Eagles game and a Justin Timberlake concert, as well as season passes to Hersheypark.

“We wanted to do something special and came up with the idea of a Halloween party,” Jeff recalls. “The first year it was held on Halloween, and that’s the year we had the Halloween snowstorm. It wasn’t just flurries, it was several inches of snow. I thought the event would be a bust, but amazingly we had about 50 people show up, and most were in costume. The party has grown every year since then.”

This year’s Halloween party will have a special follow-up: the restaurant’s 25th anniversary celebration. November 1 is the official anniversary date, and the menu will feature a number of specials throughout the week. “We’ve proudly served Lancaster County for 25 years. It’s an exciting milestone,” Jeff says.

Frogg’s will keep the celebration going through December with its own take on the holidays: 24 Days of Christmas will feature dining specials on each of the days leading up to Christmas. “We’re supersizing the 12 Days of Christmas,” Jeff explains. 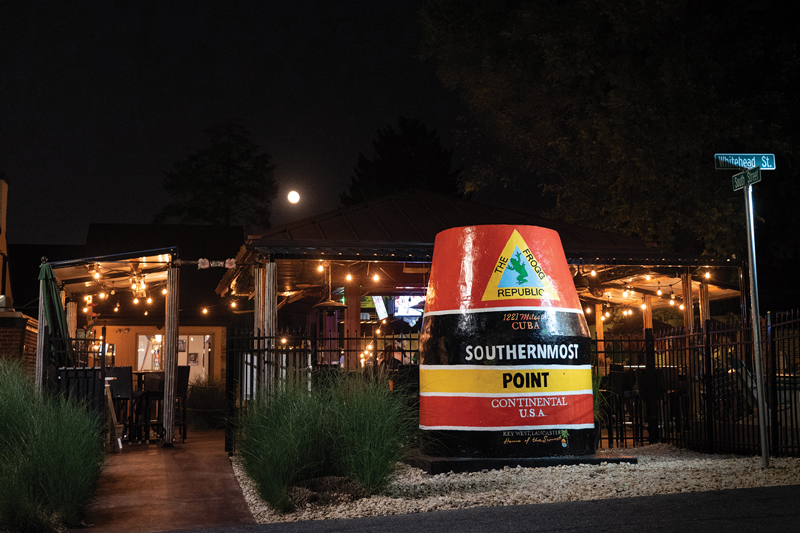 Jeff and co-owner Beth Conklin opened the restaurant in 1993 with restaurant financiers and entrepreneurs Dennis and Sandy Herr. The name Tobias S. Frogg was chosen not only because it’s a bit unusual, but it also has significance to the Herrs – one of Dennis’ forefathers was named Tobias, and Frogg is Sandy’s nickname. Both Jeff and Beth have a restaurant background – Jeff as a bartender and restaurant and hotel manager, and Beth as an accountant and waitress. Jeff explains they bought out the Herrs several years ago, and although Beth remains his partner, she’s not as involved with the day-to-day operations as she had been.

In search of the unique factor, the restaurant’s owners set their sights on the great outdoors. “Tobias S. Frogg had been doing well, but we needed something to make us different; that’s when we built the outdoor patio,” Jeff explains. Over the years, it’s been remodeled and expanded. Today, the outdoor patio and bar seats 65 and features five large-screen TVs and both a mister to help keep guests cool in the summer and heaters for warmth on the cooler days/nights of early spring and late fall. (The outdoor-dining area opens in April and, weather permitting, remains open through Thanksgiving. Last year’s mild weather enabled guests to enjoy outdoor dining through the first week of December.)

Adjoining the bar are several multi-level outdoor-dining areas. A firepit with a casual-seating area features a beach mural backdrop and plantings. “You really do feel like you’re sitting at the beach, but without the drive,” Jeff says.

A wooden footbridge leads to the palapa area. Jeff designed this area to have a tropical feel that encompasses the palapas, tikis, a waterfall and a firepit. There’s also a lower-level dining area that features large sun shades rather than individual table umbrellas. “Even if you’re seated at the lower-level patio, there’s a great view. Wherever you’re seated on the patio, you have the feeling that you’re escaping from your everyday life – we call it ‘changes in latitude’,” he stresses, adding that the area and the buoy by the entrance from the parking lot have become favorite photo/selfie spots for guests. 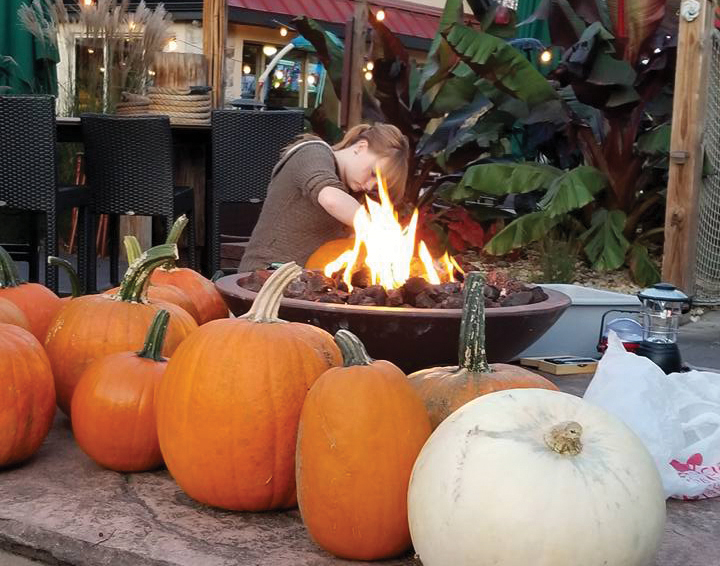 The indoor bar area boasts a bar that wraps around an existing fireplace, booths, high-top tables and 12 TVs. (Large patio doors can be rolled back to make it an indoor/outdoor room.) “The bar was designed to make everyone feel comfortable; it’s a place where ladies can come by themselves or in a group and feel welcome,” he says.

Tobias S. Frogg’s indoor-dining area, which seats 135, boasts three dining rooms and an enclosed front porch, all of which were recently renovated and now feature what he describes as a “beachy feel” to complement the outdoor areas. 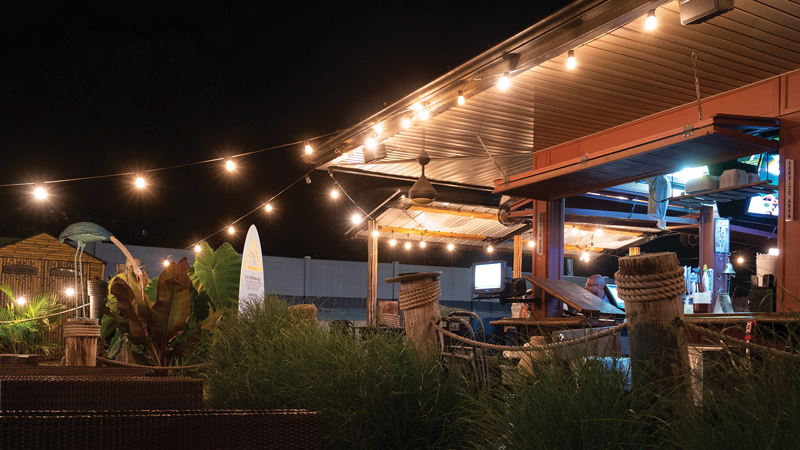 The menu, of course, is another key to the restaurant’s longevity. After a major revamp a year or two ago, Jeff describes menu items as “fresher and lighter; and physically, the menu is more visual.” Popular items include wings (the variety of flavors include this year’s flavor winner – Maggi May’s Angry Fireball), Frogg’s ultimate (shrimp) tacos, aloha tuna salad and coconut shrimp salad. There’s also a variety of burgers as well as entrées (chicken, beef and seafood dishes) and small plates such as lobster mac & cheese. There is also a tapas menu. A children’s menu includes chicken fingers and grilled cheese. Menu items are augmented by specials, and during the NFL season, there’s a 50-cent wing special.

Drinks include seasonal craft brews, wine, cocktails (including martinis), ice cream drinks (including a mudslide), and specialty drinks such as Tammy’s Coconut Bay Breeze.
Jeff also points to the restaurant’s long-time staff as being one of the restaurant’s most-valued assets. “Our staff makes every effort to ensure that guests have a great experience. We have a number of ‘regulars,’ and they’re greeted by name, but even if you’re a first-time guest, you feel welcome,” he stresses.