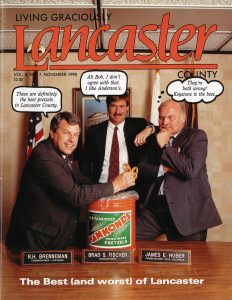 Thirty years. Time certainly flies. I started Lancaster County Magazine’s Best of Lancaster readers’ survey on a whim. I always enjoyed the Best of issues published by city pubs such as Philadelphia, Washingtonian, Baltimore and Richmond Surroundings magazines and thought, “Why not Lancaster?”

So, in 1990, I devised a ballot and had it inserted into the June issue. To my relief, completed ballots began arriving in the mail. I spent the summer tabulating the results the old-fashioned way – recording votes with hash marks on legal pads.

Of course, now it’s mostly done online, which makes tabulating the votes much easier and faster. We also still receive a fair share of hand-written ballots that are delivered via snail mail.

Choosing a cover for November has always been challenging yet fun. In 1990, we asked the county commissioners – Jim Huber, Robert Brenneman and Brad Fischer — to pose with some products provided by winners of the survey. It sounded good on paper, but when we looked at the pictures, they looked like three guys posing with a conglomeration of stuff. Fortunately, photographer Allan Holm thought to take some photos with just one product – a can of Hammond’s Pretzels. However, the picture was still missing something.

For those of you who weren’t around in 1990 or had forgotten the trio, the commissioners were notorious for not agreeing … on anything. I looked at the picture we chose and thought “bubbles” – as in comic captions. The bubbles satisfied the missing element.

The commissioners had no idea what the cover looked like until magazines were delivered to their office. I heard through the grapevine that at first they were upset, but then saw the humor in it. It’s still one of my favorite covers. 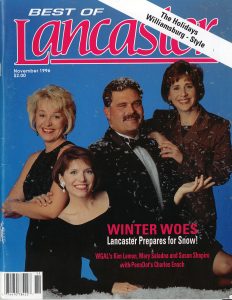 In 1996, we asked WGAL’s Kim Lemon, Susan Shapiro and Mary Saladna to pose with PennDOT’s Charles Enoch for the November cover. The premise was Lancastrians were living in fear of what the winter of 1996-‘97 would hold. The previous winter could best be described as every bad word you can think of rolled into one. Enoch and the crew from WGAL were the bearers of bad news day in and day out throughout the winter of ’95-’96.

As for the cover, the idea was for the “Fab Four” to dress to the nines and have snow drift down from above. Allan Holm ordered the faux snow from a supply house in New York. On the day before the shoot, it still had not arrived. What were we going to do? Dump detergent powder on them?

Fortunately, Allan tracked down our snow at FedEx on the morning of the shoot. Then, staff member Julie Cramer climbed a very tall ladder and proceeded to dump the entire bag on Kim Lemon, who had spent the morning at the salon. Fortunately, she was a good sport about it. We carefully picked the mound of flakes out of Kim’s hair, returned them to the bag and tried again, this time successfully. Julie kept her job. 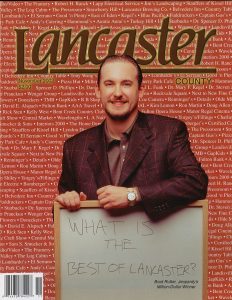 Another November cover (2002) featured Brad Rutter, who started his mastery of trivia as a member of Manheim Township’s Quiz Bowl team and went on to become one of the most successful contestants to appear on Jeopardy!. When we photographed him, he had just won the game show’s Million Dollar Tournament.

For the cover, we asked Brad to print “What is the Best of Lancaster?” on a board. Joanne Thomas (the art director at the time) filled in the background of the picture with the answers to the question, i.e., the names of winners.

Seventeen years later, I still have the board in my garage. I’ve often thought of donating it to a charity auction, but because I didn’t think to have Brad sign it, its value is probably nil. For now, it will stay in my garage. 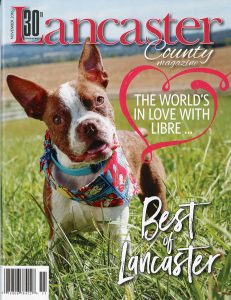 For the magazine’s 30th anniversary in 2016, we asked the wonder dog, Libre, to pose for our cover. We were thrilled to have Darren Modricker of Willow Street Pictures agree to photograph the Boston terrier who had been adopted by Janine Guido, the founder of Speranza Animal Rescue in Mechanicsburg, and the woman who literally willed the dog to live (with a lot of help from Dr. Ivan Pryor of Dillsburg Veterinary Center) following his rescue (by Dextin Orme and Jennifer Nields) from a backyard breeder in Southern Lancaster County.

The reaction to that cover was mind-boggling. Dog lovers who had followed Libre’s story – from across the country and as far away as Italy – called to order a copy of the magazine. Libre, of course, went on to become a canine Superman. Because of him, Pennsylvania’s dog laws have vastly improved.

As for this year’s cover, it was so much fun to catch up with the Myers family (see page 44). But, it didn’t come without its hiccups. The only time the eight siblings and cousins would be together was Labor Day weekend. Oh, no! I would be in North Carolina (and couldn’t change my plans), while Nick Gould had planned to go camping with his kids. But, being the trouper he is, Nick said that if Saturday morning would suit the family, he would postpone his departure time. Briana Webster Hess cleared her schedule to sub for me. We went to the farm a week ahead of time and chose a location, as well as one to use in case of rain.

I worried about the photo shoot all during my 12-hour trip back to Lancaster that Saturday. I was assured via texts and emails that all went well. I love my people! They’re the best! 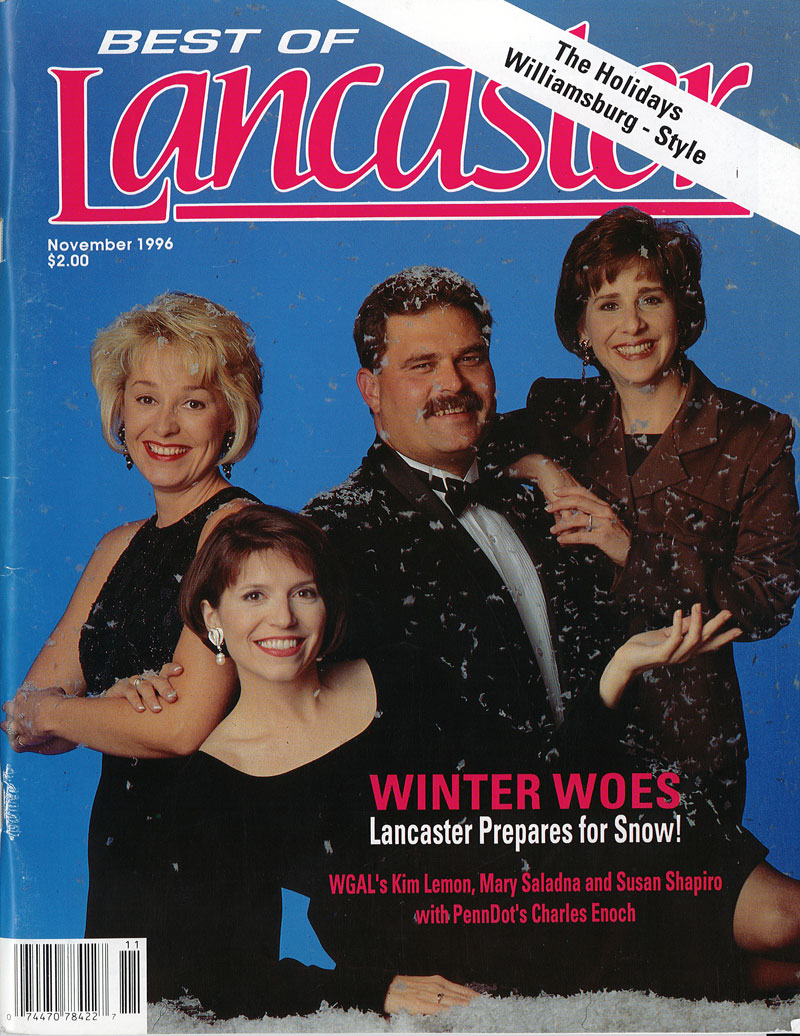