When a beloved only daughter reached the once-in-a-lifetime milestone in the Jewish faith – her bat mitzvah – her parents declared it time for an over-the-top, out-of-the-park celebration. Sloane Kidan will always remember her bat mitzvah – held in Lancaster County but filled with the cosmopolitan sophistication of a New York bash.

Having grown up in the suburbs of New York City, Sloane and her mother, Tracy, knew that every event is a “wow” in the metro area. “It’s a fast-moving, trendy place,” says Tracy, who has attended her share of impressive bar and bat mitzvahs over the years, including her own. When the family moved to Lititz in 2013, Tracy was already thinking of how she could create a special celebration for  Sloane that would be “on-trend,” but also “different.”

Enticing guests to travel from New Jersey, Long Island and beyond took some creativity. Tracy borrowed the appeal of “the sweetest place on Earth,” Hershey, to tease her guest list with a save-the-date mailing of a Hershey’s Milk Chocolate Bar. “We hyped it,” says Tracy, “and added a bit of mystery. Would the party be in Hershey Park?” The buzz grew among Sloane’s friends, from February through the summer.

When the invitations arrived, mystery solved: the celebration would be held at Bent Creek Country Club in Lititz.

While many outside the Jewish faith may think of a bar or bat mitzvah celebration as “a wedding reception, except for one person,” it’s not that easily translated. The significant passage into adulthood is marked with a religious ceremony, which Sloane and her family experienced in Israel. The subsequent celebration with friends and family is the joyous occasion we often think of as the “bat mitzvah,” which is crafted to be a reflection of the young lady’s personality and interests.

More of a Katherine Hepburn than a Katy Perry type of girl, Sloane’s tastes are elegant and understated – think pearls, not bling. With that in mind, two years of planning began among parents and daughter. Tracy tapped her metropolitan connections to bring the city sophistication to the party, sourcing the event planner, invitations, flowers, staging, tents and décor from New Jersey and Maryland, with the mission of transforming much of Bent Creek’s clubhouse into a posh party palace.

A bat mitzvah celebration brings three or more generations together, so the event must be appropriate and appealing for all ages. Sloane’s friends gathered in their own alfresco party room on the club’s terrace. Three makeup stations, powered by a professional makeup artist, offered hot-pink eyelashes and other glam beauty accessories, plus temporary henna tattoos. Guys and girls shot hoops with gold and silver mini-basketballs. A step-and-repeat photo backdrop made the perfect selfie station. Every young guest had a storage cubby set up to stash their gear, and it was filled with a surprise gift of shorts or sweatshirts and socks to let them get comfy later in the evening as the dance floor heated up and it was time to lose the shoes.

As the young crowd was munching on sliders and tacos at their own buffet of party fare, the adults were savoring sushi and seafood over cocktails in an adjoining dining room. Local Asian restaurant Mojo was selected to provide a sushi extravaganza.

Outdoors, a stage was coming to life with sound and lighting checks. Jordin Sparks, the 2007 American Idol winner, was warming up for her high-energy concert, perfectly timed to start with a gorgeous September sunset. “My best friend and I have been talking about our bat mitzvahs since we were 6,” says Sloane, “and I always dreamed of having someone famous. My dad gave me a list of his choices, and I chose Jordin Sparks!” The singer’s last spectacular notes were punctuated by a display of fireworks, color-coordinated to the bat mitzvah’s party colors.

Oohs and aahs were audible as the 180 guests moved to dinner through a white-draped hallway, softly lit in pink and icy blue, to the unveiling of Bent Creek’s transformed ballroom. The walls were swathed in blush-pink fabric, the ballroom’s chandeliers removed and replaced with soft uplighting washing the walls, and gobo patterns lighting the ceiling. Shell-pink tufted couches surrounded a white and gold dance floor, creating lounge areas in addition to elegant dining tables, each embellished with oversized, towering floral arrangements of tightly packed pink roses and lush hydrangea.

A radiant Sloane in a blush gown made her entrance into the ballroom carried high on the shoulders of Jordin’s dancers. Throughout the evening, many Jewish traditions were observed: Sloane addressing her guests as a young adult, thanking her parents and welcoming her guests; the candlelighting to honor people who have played significant roles in her life; the challah-cutting and father-daughter dance; Sloane being lifted on a chair on the dance floor and guests dancing the Hora, a joyful dance of hands joined in a circle with the party’s hosts.

The DJ kept the dance floor crowded through midnight, when coffee and one more sweet treat from Lancaster Cupcake ended the party, only to be followed by a sleepover at the Kidan home for Sloane’s girlfriends and a Sunday Brunch for guests the next morning.

Overnight hotel guests were greeted in their rooms with “Made in Lancaster”-themed baskets of goodies, including kettle corn popcorn, Hammond’s pretzels and whoopie pies, to give guests a taste of the Kidans’ new home of Lancaster County. Oh, and a Hershey Bar or two – just for fun. 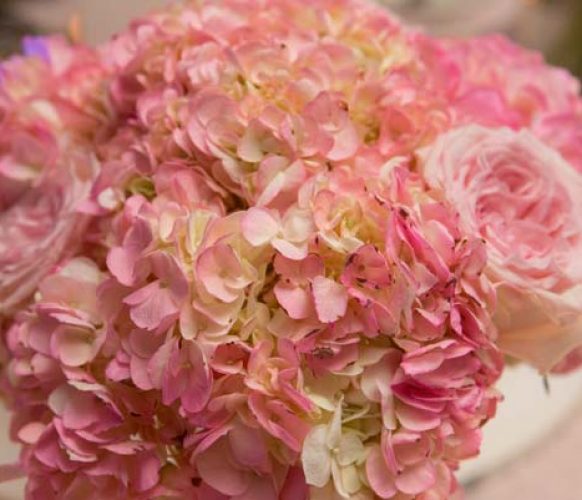 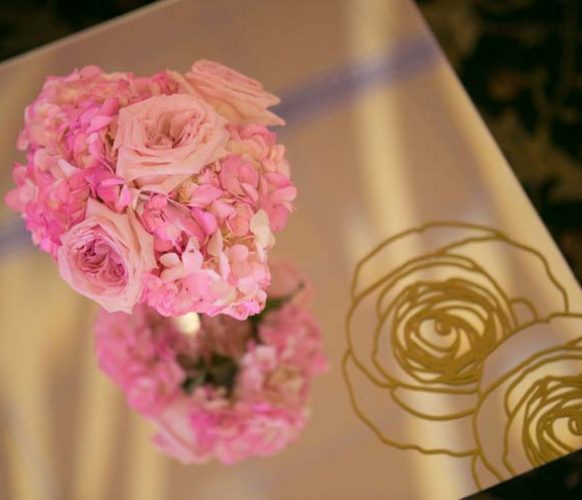 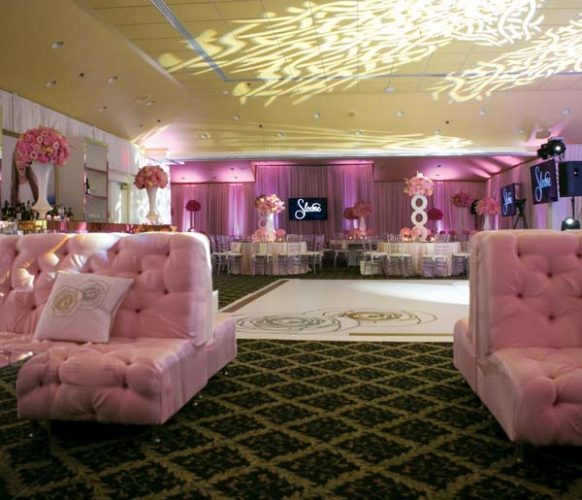 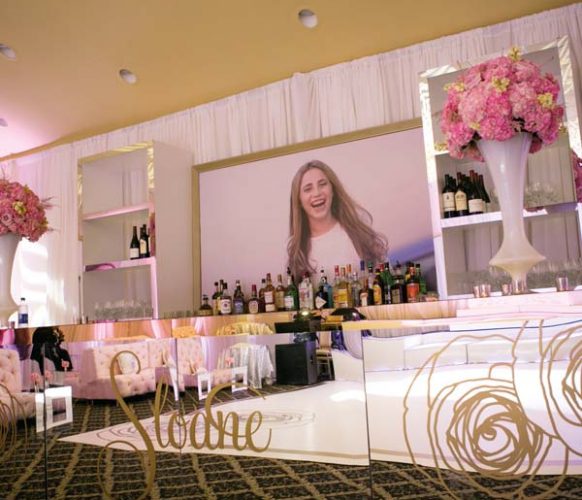 The adults enjoyed the bar area, which added big-city atmosphere to this very special evening. 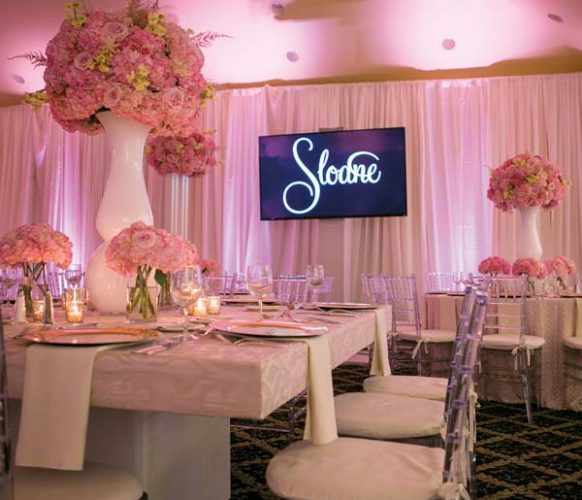 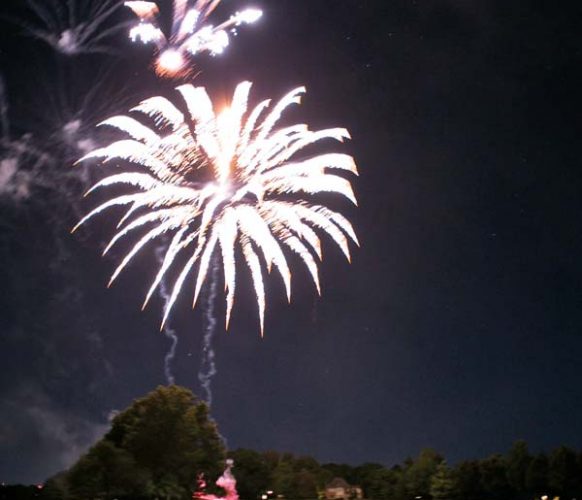 Her show culminated in a fireworks display color keyed to the party. 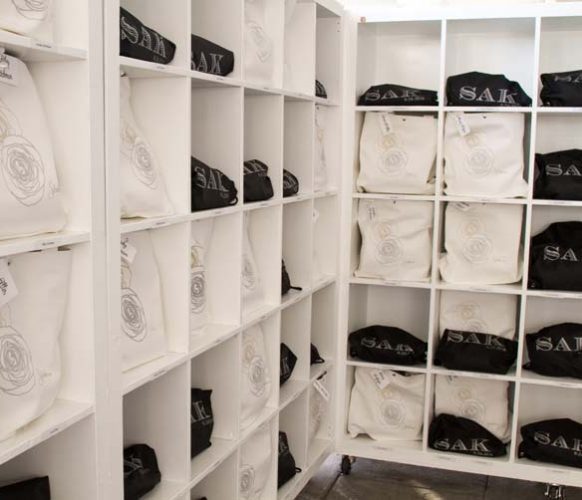 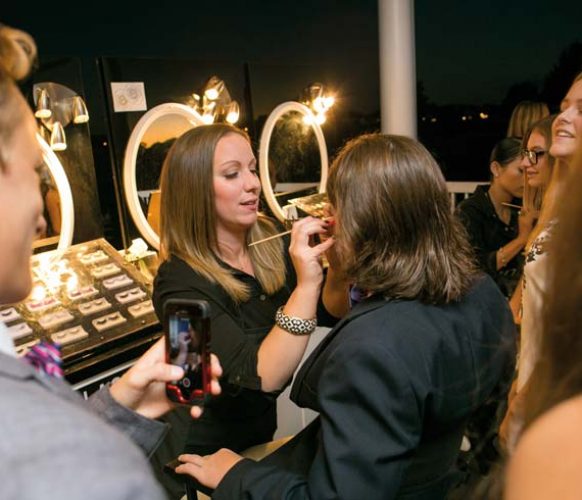 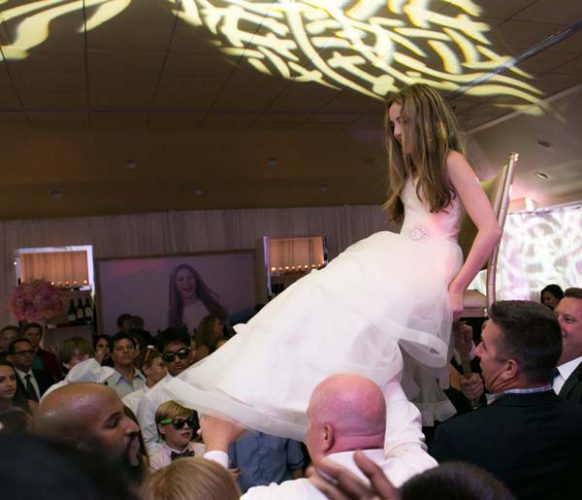 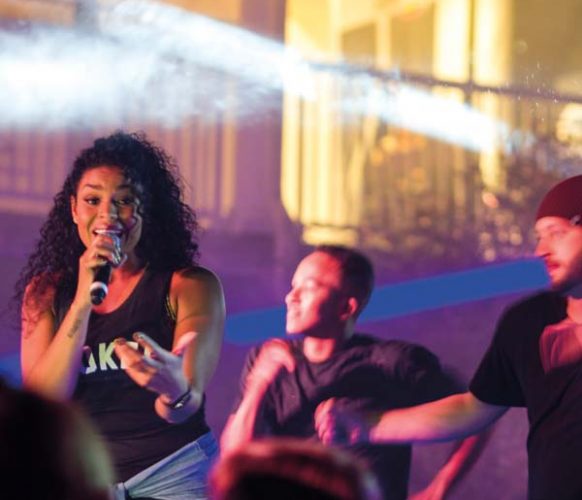 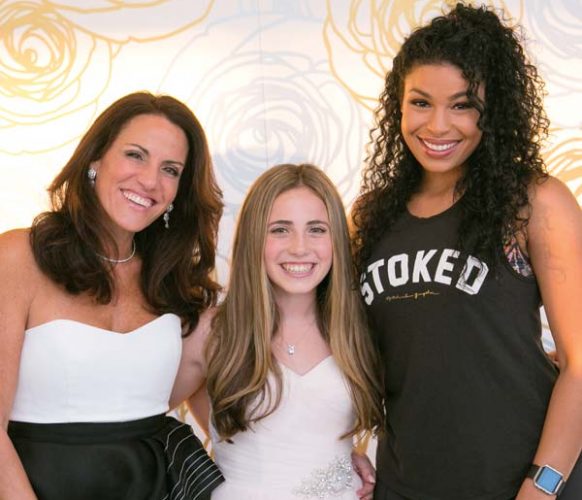 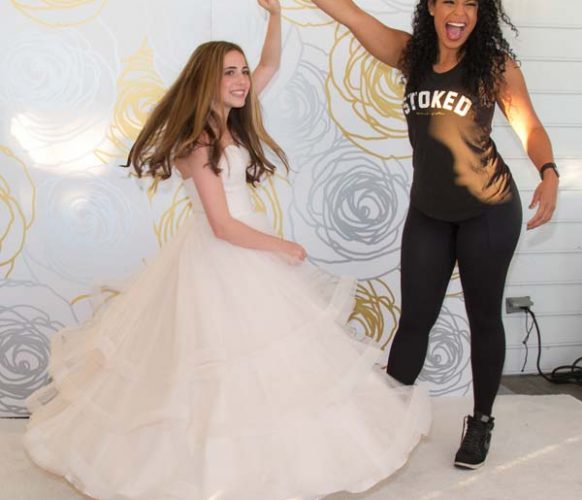 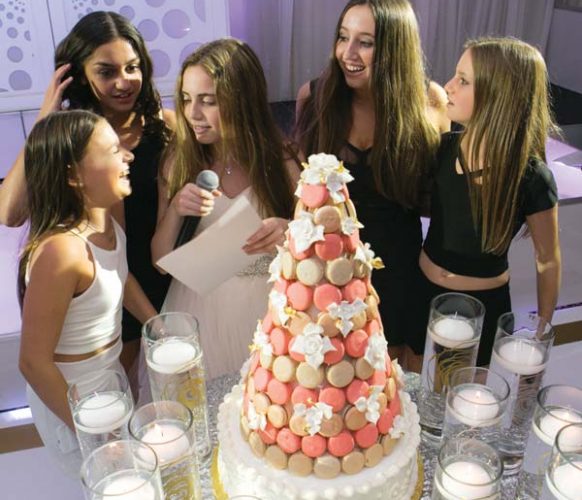 The celebration cake fit perfectly into the party’s theme: pink and visually stunning. 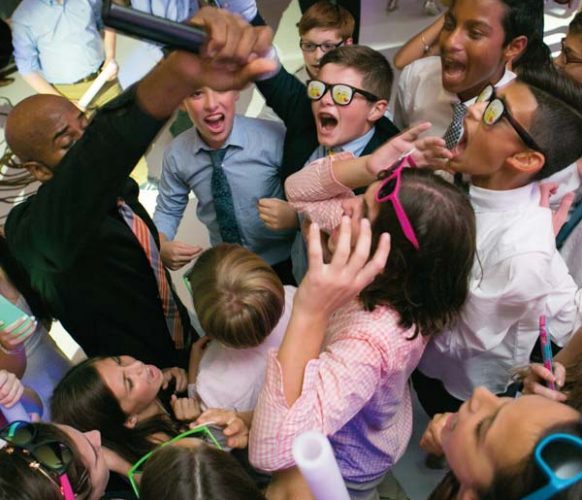 Activities for guests of all ages kept the party moving with boundless energy. 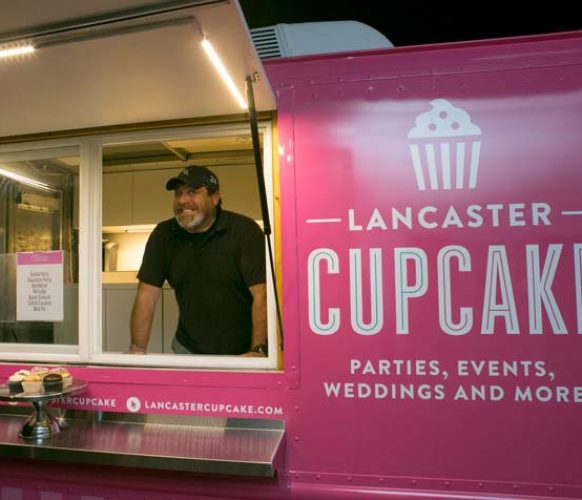 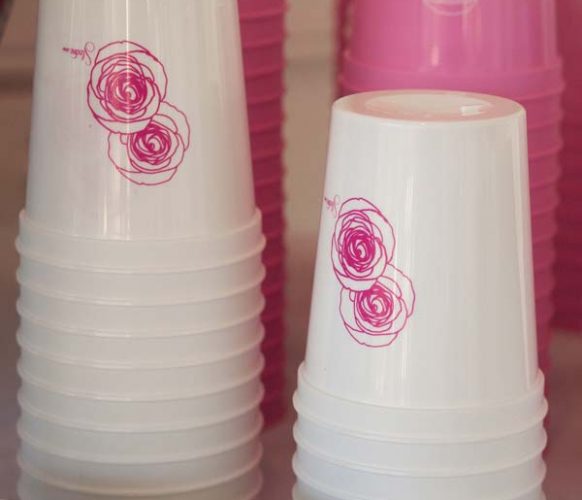 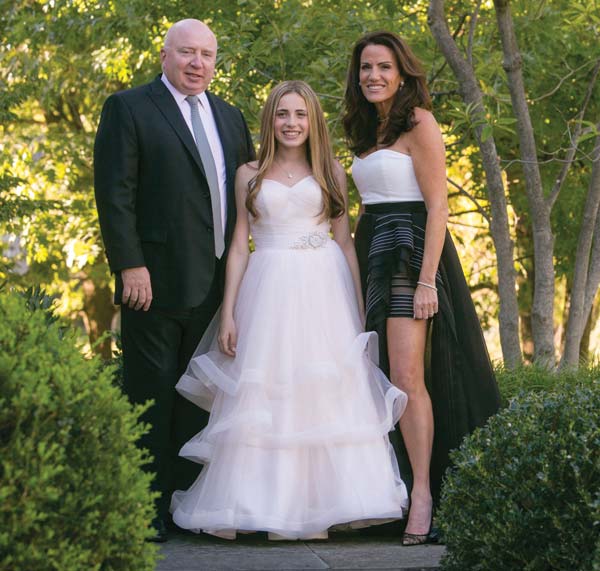 Adam, Sloane and Tracy Kidan shared some private moments and posed for formal portraits before the party got underway.