He wanted a log home. She wanted an old farmhouse. They spent nearly three years weighing their options. Then, at the “11th hour,” the two found a solution that would give them what they both wanted – milled cedar that could be stained barn red. 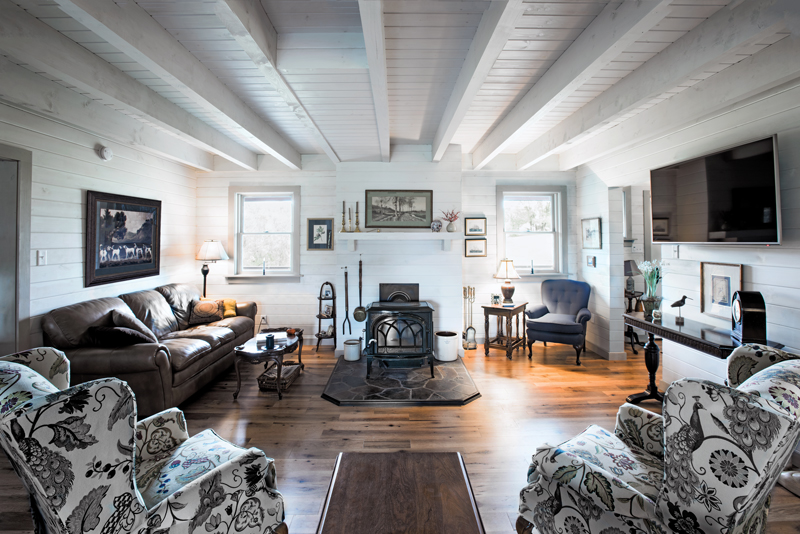 He is Chris Burt, a computer programmer who hails from Berks County. Twenty-three years ago, he put down roots on a 10-acre plot of land north of Reading, where he built an A-frame that was meant to serve as a temporary residence. Chris’ intention was to eventually build a spacious log home and use the A-frame as an office and woodshop. She is Lynne Burt, who grew up in South Jersey and became a sales rep in the Philadelphia area.

They met through mutual friends, and following their wedding 10 years ago, the Burts settled in a Montgomery County neighborhood. Loving the slower-paced lifestyle that Chris’s country retreat offered, they spent nearly every weekend in Berks County. “It was just so peaceful and serene here,” Lynne says, referring to both the location and the mindset it provided. 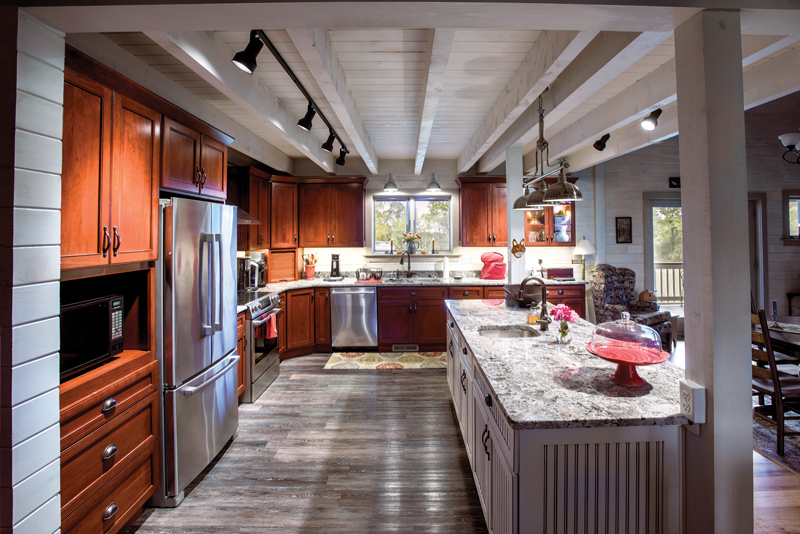 Realizing their jobs would allow them to live wherever they desired, the Burts began discussing Chris’ long-held dream of building a log home on the property and permanently moving there. “All I could envision were those shiny, golden-colored, rounded logs,” Lynne says of her lack of enthusiasm for the style. “I would have loved an old farmhouse.”

Chris, however, wasn’t keen on the idea of spending weekends “working on projects.” 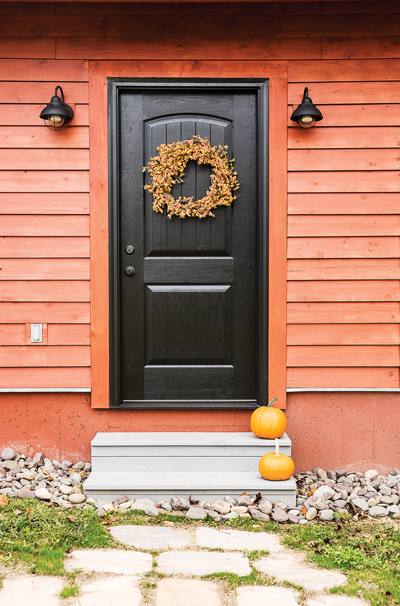 In an effort to educate themselves, they began attending home shows, including the Log & Timber Home Show, which offers an in-depth educational seminar called Log & Timber University. At one of the shows, they met representatives from Maine’s Katahdin Cedar Log Homes, whose products were featured on an episode of ABC’s Extreme Home Makeover.
With their interest piqued, they scheduled a vacation in Maine, where they toured a mill and visited the mill owner’s Katahdin-built home. They learned log homes originally dotted the state’s rugged coastline due to their ability to withstand hurricane-force winds and offer air-tight comfort in winter temperatures.

Despite all their homework – including driving to New York for an open house – they couldn’t get past the rounded-log concept. “I was really nervous about it interior-wise,” Lynne explains. “I loved my things and wanted to use them in the new house, but I didn’t know if they would look good,” she says of mixing her traditional furnishings with rustic log construction. “I didn’t want to have to buy a houseful of new furniture.”

Then, at one of their meetings with a Katahdin representative during a return trip to Maine, they learned of a product that was being developed by a new division of the company, Arborwall Solid Cedar Homes. The new product entailed cedar logs that are planed to create the look of clapboard. Lynne and Chris liked the fact that the cedar could be stained with color. 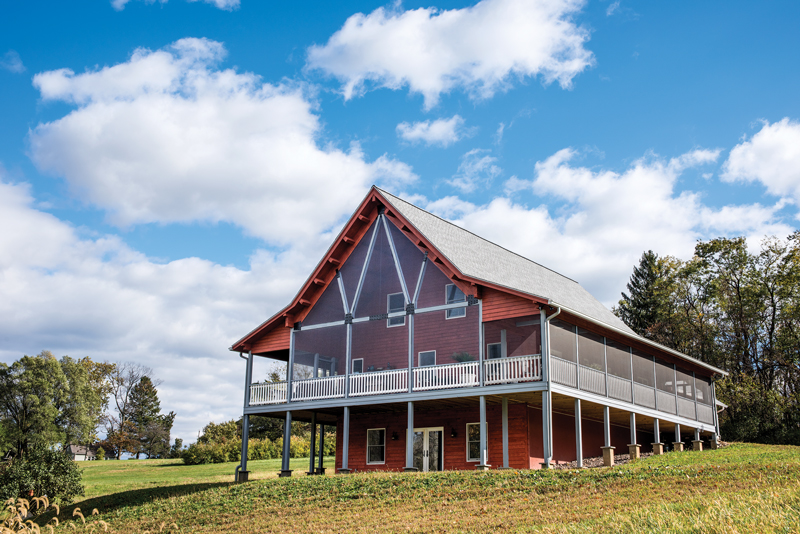 Indoors, the Burts would have the option of finishing the walls to meet their style and taste. They were instantly drawn to the company’s tongue-and-groove treatment that mimics shiplap styling that is rooted in history – before plywood was developed, home builders used flat planks as sheathing for the interior of walls – and is the signature look of designer Joanna Gaines of the HGTV show Fixer Upper. Like the exterior, the interior walls could be left natural, whitewashed or even stained with color. They also were impressed with the company’s purlin and truss roof system that delivers the open look they desired for their home.

The Burts were also happy to learn that an Arborwall home is environmentally friendly. It begins with the cedar trees themselves; from a sustainable perspective, they grow quickly and are easily replenished. Because the trees deliver a natural resistance to rot and insects, they are pesticide-free. And, northern white cedar not only provides natural insulation, but its R rating (insulation effectiveness) – 1.4 per inch – is also the highest among any wood species that is used for construction purposes. “Plus, you can put in as much insulation as you want,” Chris points out. Ultimately, they went a step further and elected to install Anderson’s 400 Series windows, as well as heat and cool their home via a groundwater geothermal system.

The Burts were sold on the concept – Chris could have his log home, while Lynne could have her farmhouse. Together, they would have their forever home. 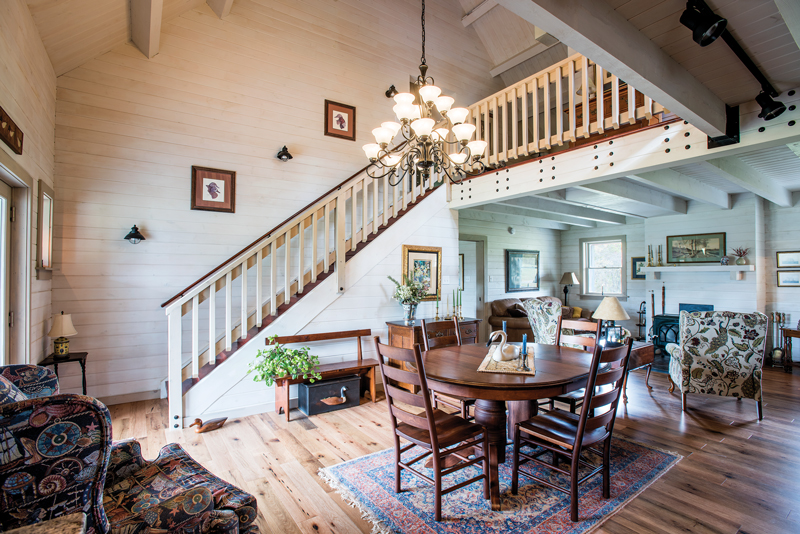 They chose one of Arborwall’s models as their starting point to create a custom home that includes an open-concept living area, a first-floor master suite; an expansive mudroom/laundry; a daylight basement; and, on the second floor, guest rooms and his-and-her offices. Outdoors, a soaring screened porch skirts the rear and side of the house. A farm-style porch frames the front of the house. “It looks nothing like the model,” Chris reports.

The couple worked with Christiana-based Highline Construction, whose employees oversaw all aspects of carpentry, to build their home. The company, which has expertise in timber framing, has worked on previous Katahdin projects. 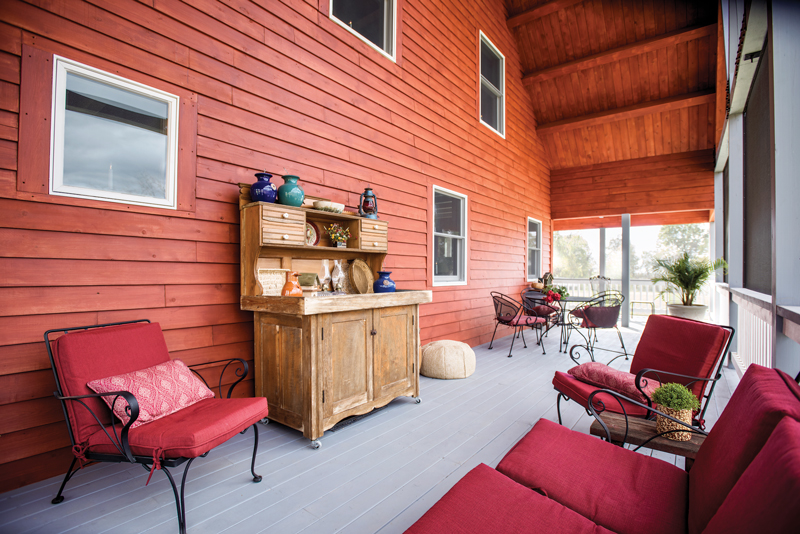 Lynne and Chris also acted as the interior designers for the project, as they selected all the finishes, flooring, lighting fixtures, counter surfaces and other elements for the house. Weekends were admittedly spent visiting design centers or perusing the Internet. “Our goal was to design a house that reflects the way we live,” Chris notes. Lynne, who calls their style “relaxed traditional,” furnished their home with the pieces she feared would not fit in a log home. “I think we bought one new chair,” she says. “Otherwise, everything fit in perfectly.” They even incorporated the Dutch door from their previous home into the mudroom. The décor also extends to mementos from their travels, with art and other items from Nantucket and the Outer Banks being among their favorites.

The kitchen, which was designed by Heffleger Kitchens in Reading, echoes the traditional styling that defines the house. The semi-custom cherry-finish cabinets are accented with oil-rubbed bronze pulls, while the counters are topped with granite. An island multitasks as a breakfast bar and prep/staging area. “We eat out of our garden,” Lynne says of the 25×25-foot plot that is located behind the house. 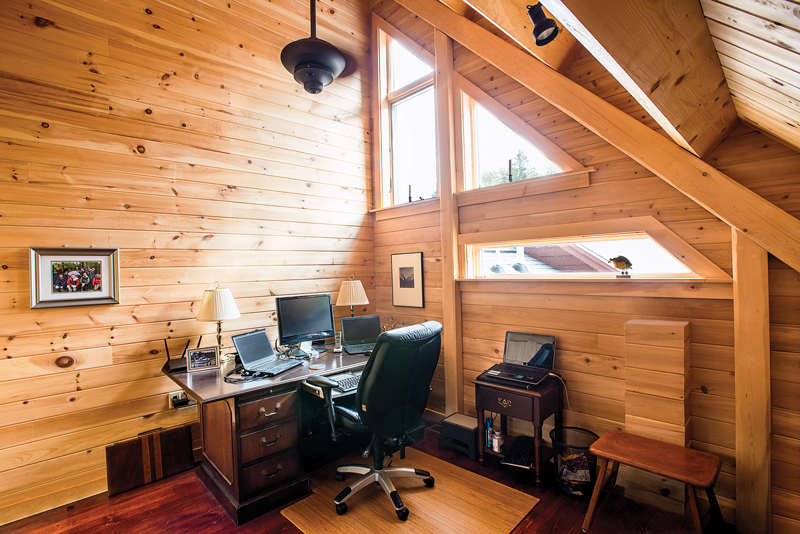 The floors throughout are covered with a commercial-grade luxury vinyl tile (LVT) that perfectly mimics aged hardwood. Bob, the Burts’ yellow Lab, has put them to the test, but they’ve remained pristine. “I just don’t want to worry about those sorts of things,” Lynne says. “We want everyone who visits to relax and enjoy themselves.”

And, speaking of relaxing, the screened porch has become the Burts’ favorite getaway. It’s their go-to place to enjoy a meal or simply sit and watch the wildlife meander across their property or study the storms that roll across the adjacent valley. “Sometimes, I can’t believe this is our life,” Lynne comments. 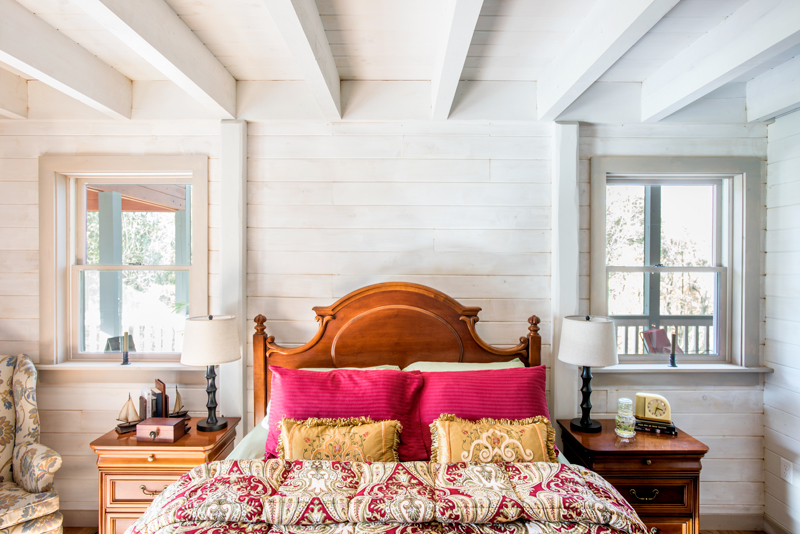 The Burts love their lifestyle so much – and are equally impressed with Katahdin products – that they’ve become Independent Authorized Dealers for the 40-year-old company, calling their enterprise Naturally Home Consulting. “These homes can be built anywhere,” Chris says of Arborwall designs. “They’d fit into just about any subdivision, they’d look good as a mountain retreat, and they’d be perfect as a beach house. In fact, an entire Arborwall subdivision is being built in a lake community in Ohio.” They share their enthusiasm for Arborwall by attending home and lifestyle shows – now as vendors – that are held from Philadelphia to New York. “We really believe in this product,” Chris says. They will be vendors at the Suburban Pennsylvania Spring Home Show, being held February 1-3 at the Lancaster County Convention Center.

For more information, visit the Burts’ website at naturallyhomeconsulting.com.