As a news reporter and anchor for WGAL, Matt Barcaro’s job can be intense at times. From being on deadline to covering breaking stories, television news is a fast-paced, high-pressure industry. Matt’s backyard garden provides a respite from work. It’s a place where he can recharge and enjoy some peace and quiet … and delicious, home-grown food, of course. “That’s a bonus,” he laughs. 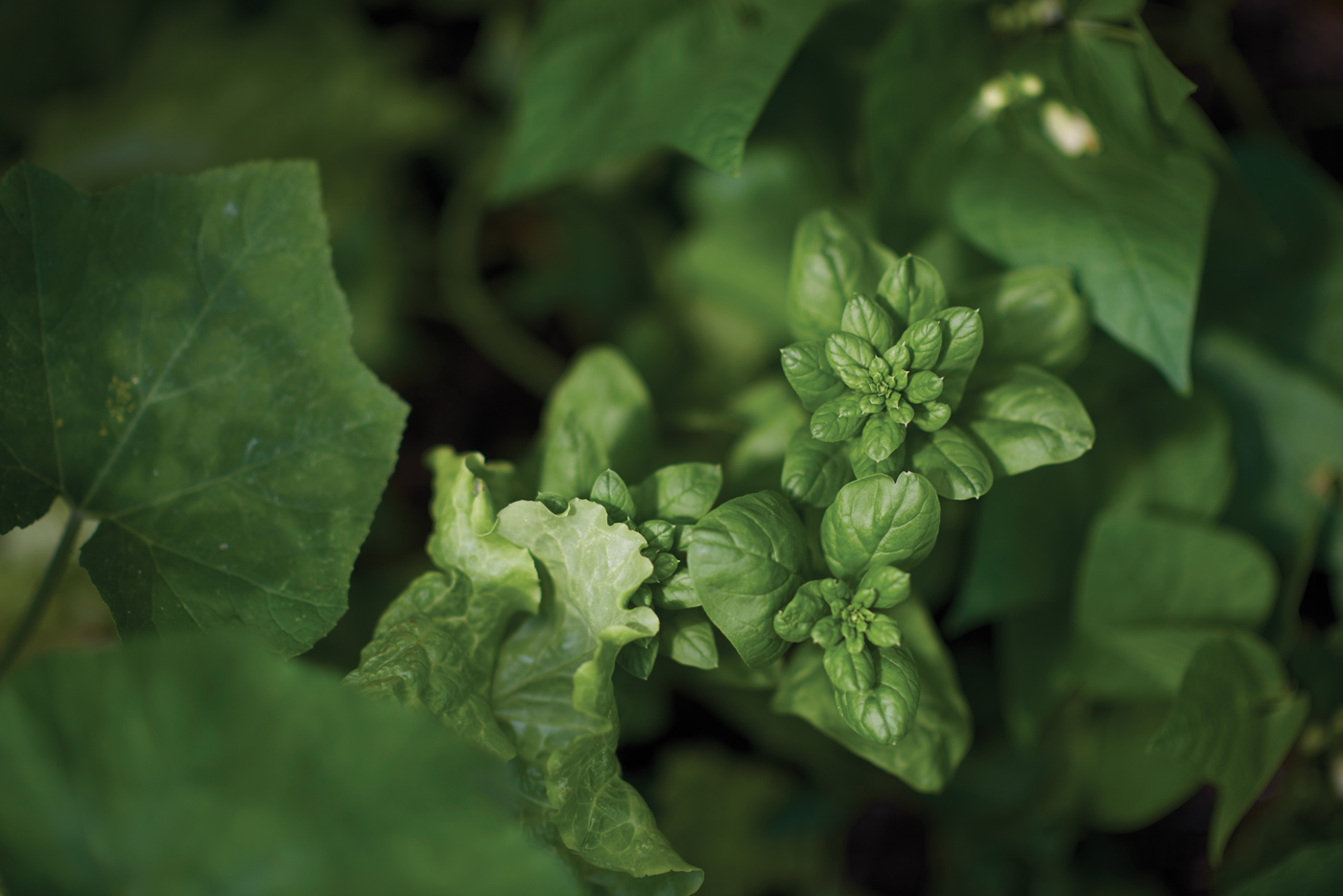 Even though it can be a “pressure-cooker,” Matt loves his job. “I could never do a desk job. [As a reporter,] every day is different,” he reflects. “You leave each day doing something you never expected to do.” Matt currently works the morning shift, meaning his workday starts at 3:30 a.m. He then reports live during WGAL’s 2.5-hour-long morning show, running from 4:30 to 7 a.m. On weekends, he anchors the morning newscasts. “Getting to see the sunrise is a big benefit,” he remarks.

When he’s off the clock, tending to his garden is one of his favorite ways to unwind. Matt has enjoyed gardening for as long as he can remember. Growing up in Montgomery County, his mother always had a garden each year. “There was always something to pick and eat,” he recalls. Even after he went out on his own, Matt would grow basil or other herbs on the windowsills of his apartments.

When he moved to suburban Lancaster County with his wife, Jess, he started his own organic garden in the backyard. He installed his first raised bed two years ago and a second last winter. He also utilizes pots to grow herbs and container-variety vegetables on their deck. Vegetable gardening is Matt’s domain while Jess enjoys beautifying the yard with flowers. “She has a good eye for color, size and shape,” he says of the lovely planters and flower beds in their backyard. 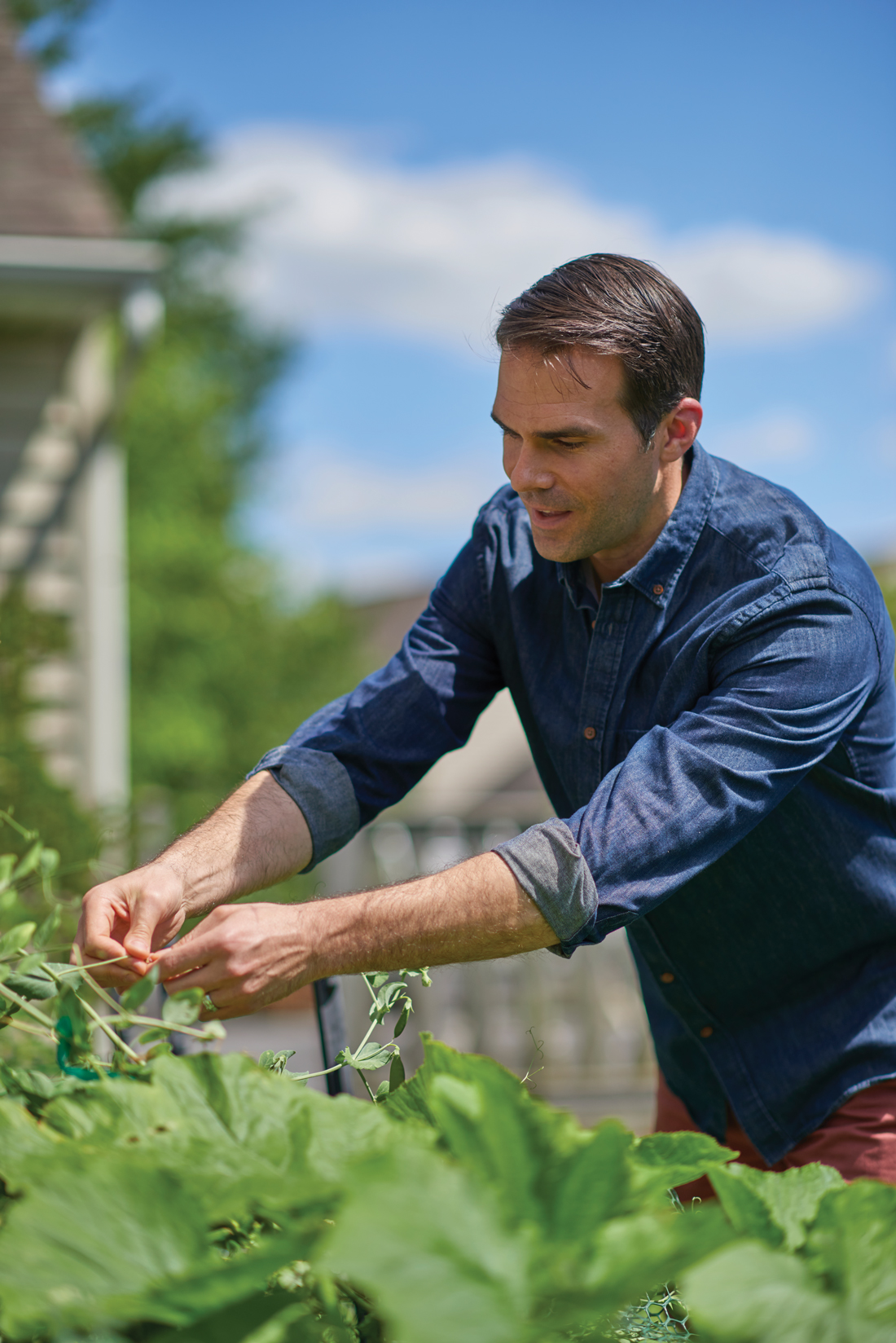 Tending to his garden is one of Matt’s favorite ways to unwind and recharge.

Each year, Matt likes to try something new in his garden. “It’s a science experiment every year,” he says. He is conducting a few experiments this growing season. It’s the first time he’s started all his plants from seed – some of which were planted unintentionally. During the winter, Matt threw some cherry tomatoes into his compost. As spring arrived, the seeds began to germinate, so he transplanted them into a container to see how they would fare.

Last season, he noticed the number of pollinators in his yard was lacking and his plants took longer to produce fruit. Matt planted a patch of wildflowers this year to attract bees and butterflies to the garden. 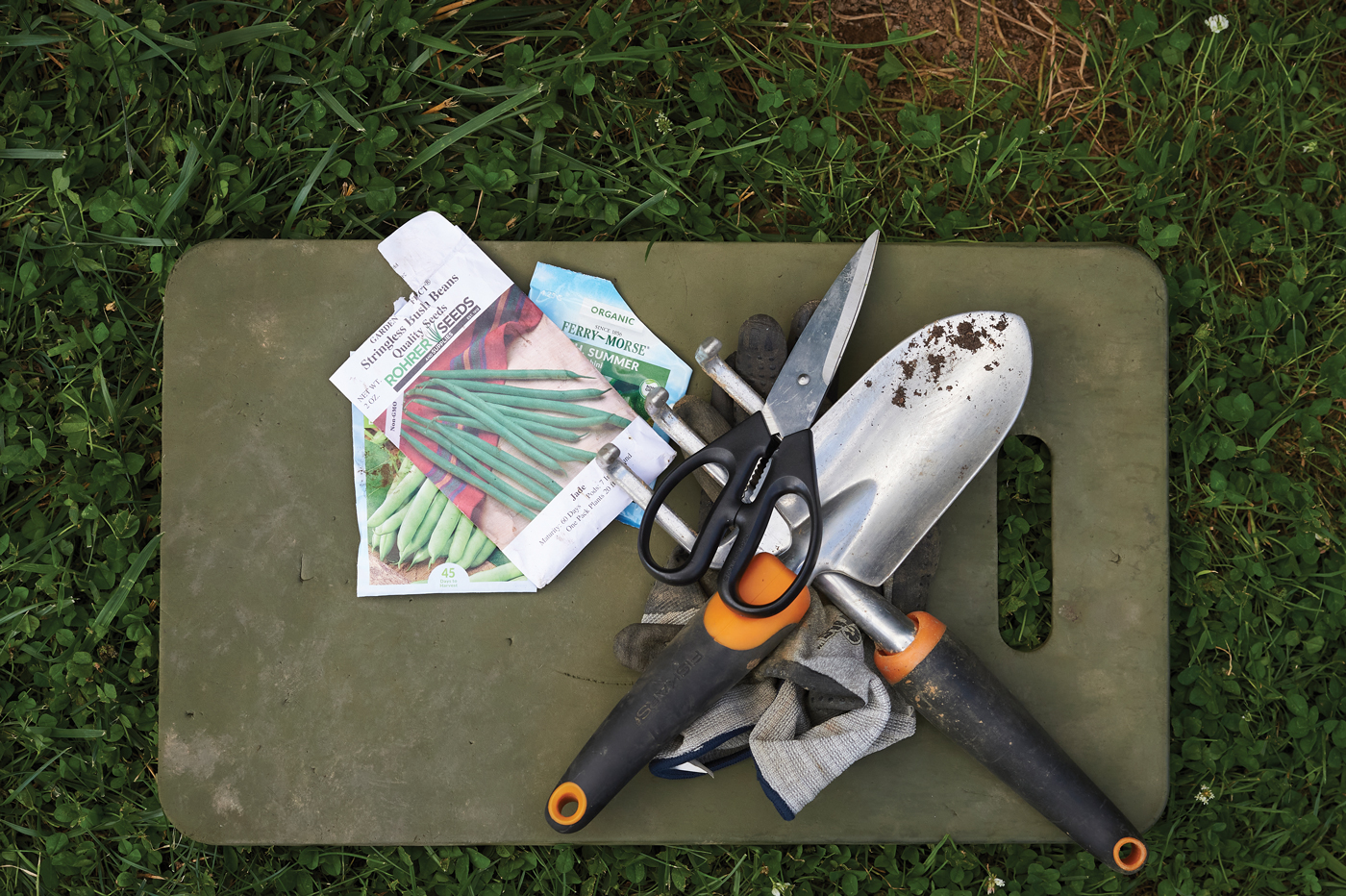 This year, Matt grew all his plants from seed for the first time.

Garlic and a container-variety zucchini are also new this growing season. In November 2020, he separated a head of garlic and planted each clove in his raised bed. He was shocked to see green popping up out of the snow a few months later. Matt is hoping to harvest the garlic in late summer but is worried that his latest “nemesis” might get to them first.

As all seasoned gardeners know, each growing season comes with its own challenges. For Matt, this year the challenge is voles. He noticed tunnels forming in the garden, so he reached out to Penn State Extension to find the best way to prevent the critters from ravaging his garden. The organization recommended trapping them; Matt has caught one so far.

Matt emphasizes the amount of patience that gardening requires. He explains that gardeners must have the “willingness to get things wrong.” Each gardening season is different and there are a lot of factors at play that determine the success of your garden. It can rain too much or too little. Critters and insects can wreak havoc on your prized plants. Maybe you planted too early, or you didn’t weed enough. Whatever the case may be, Matt believes if you are able to learn from your mistakes and the circumstances outside of your control, you can be a successful gardener. 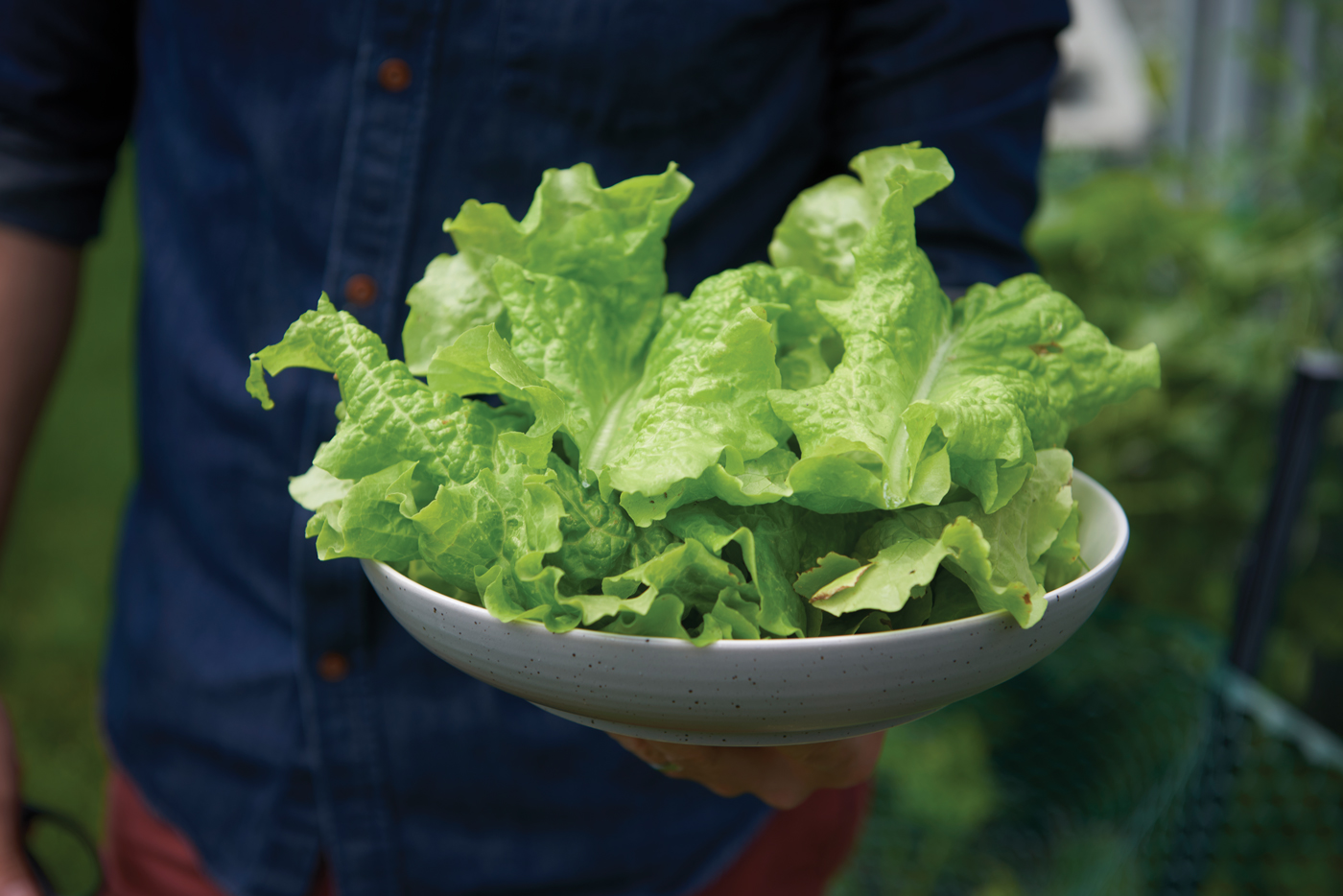 Matt’s gardening goal is to grow enough ingredients to make a full salad. This year, he is growing lettuce, spinach, kale, cherry tomatoes and several herbs.

Following his own advice, Matt often googles his various gardening queries to learn how to make his harvest more successful. He also receives helpful tips from his faithful Facebook followers. Matt enjoys sharing pictures of his garden, the meals he cooks and most of all, the sunrises he often sees during his morning shift with his over 16,000 Facebook followers. “I try to make my page a positive space where we can share our hobbies and passions – and sunrises/sunsets, of course,” he wrote in a Facebook post this year. When Matt has a question about gardening, he often asks his followers for advice. 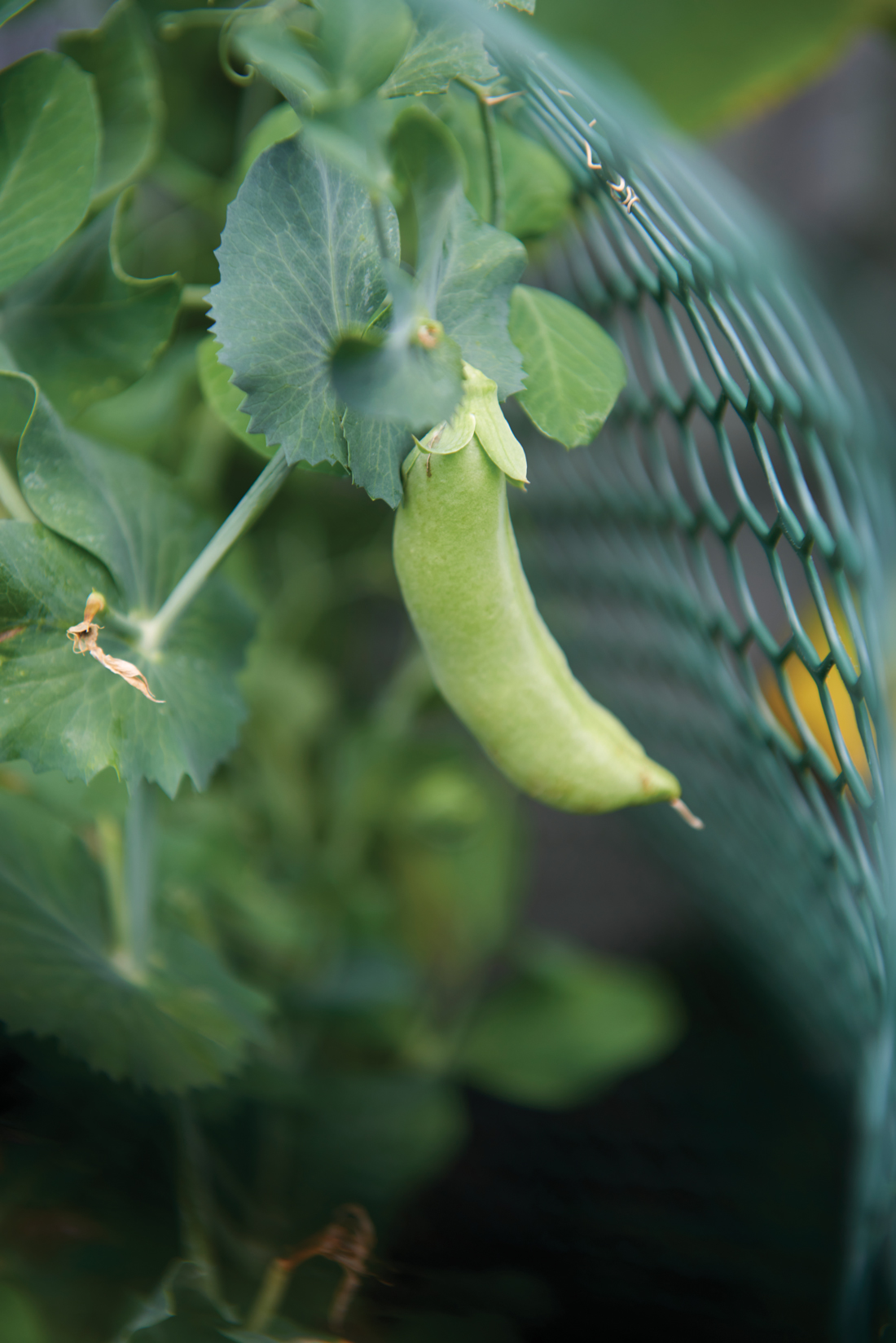 Matt loves to snack on peas while he gardens.

In May 2020, when he discovered rabbits snacking on his pea sprouts, Matt installed a chicken-wire fence. Unfortunately, the rabbits were still finding their way into his garden. So, Matt took to Facebook to find a solution. His dedicated followers chimed in with tips and tricks to keep the critters out. They recommended planting marigolds and installing a fence with smaller holes. So far, it’s worked!

After stocking up at Rohrer Seeds for this growing season,  Matt couldn’t wait to start planting. He planted his peas just after St. Patrick’s Day. “I had to cover the beds with blankets twice when it got close to frost,” Matt recalls of the frequent-frost advisories this past spring. After starting his other seedlings indoors, he was eager to plant them in the raised beds. “Getting the timing right is tricky,” Matt says. In late April, he posted to his Facebook, asking his followers if it was too early to transplant the seedlings to the raised beds. His followers told him to wait. “Waiting is the hardest part,” he laments. He listened to their advice and planted the rest of his seedlings in mid-May. 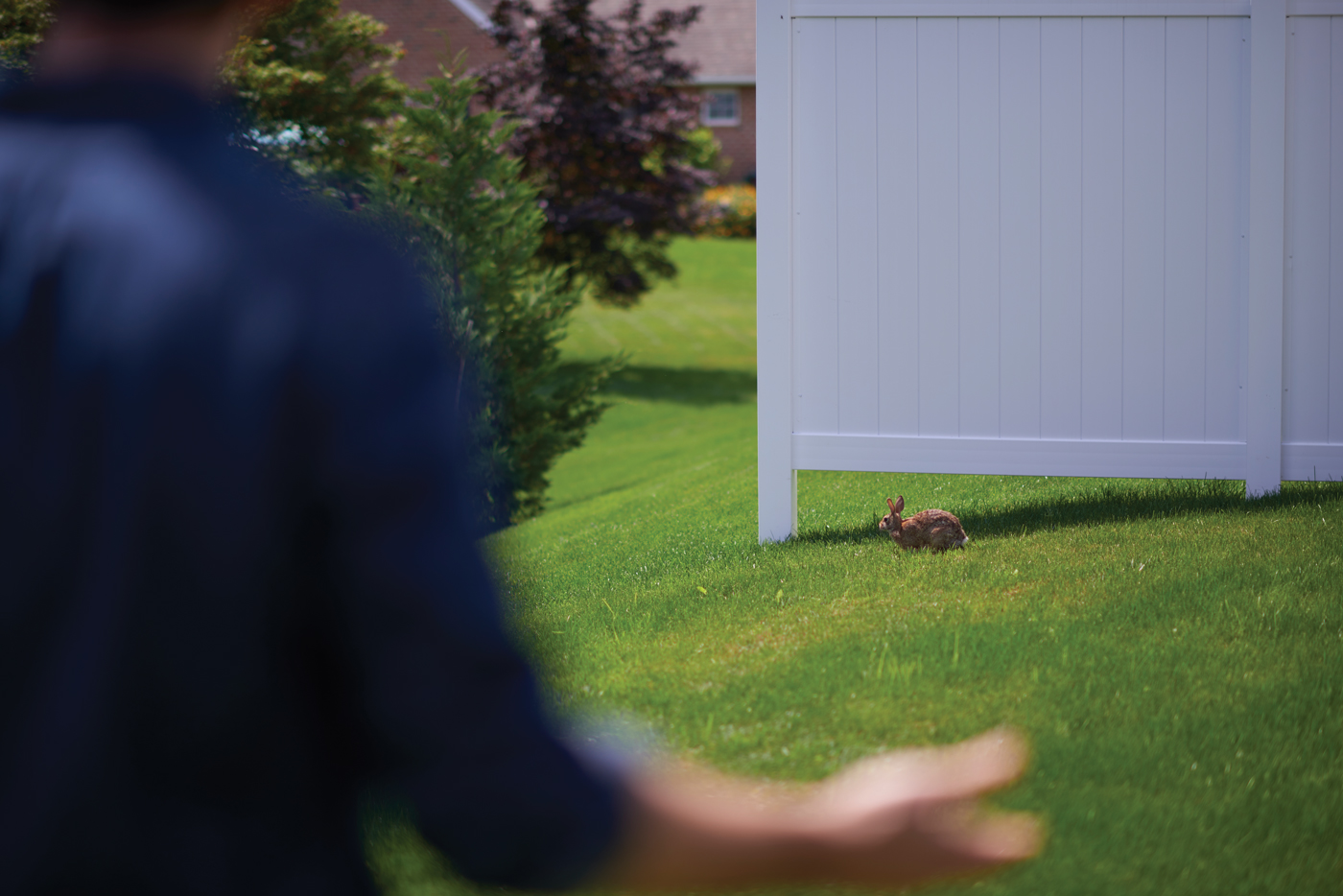 Last year, rabbits wreaked havoc on Matt’s garden. Thanks to his Facebook followers’ tips and tricks, he’s been able to keep the rabbits at bay.

As a lifelong foodie – “Other kids watched Saturday morning cartoons; I watched cooking shows on PBS,” he recalls – Matt often posts pictures of the dishes he cooks, and his followers love to learn his recipes. At the start of the pandemic, Matt was looking for a way to develop personal connections while being socially isolated. He decided to try his hand at his own cooking show and started Quarantine Cooking with Matt. Each week, he would go live on Facebook and welcome his followers into his kitchen. “God bless my wife for agreeing to hold a phone and record me for an hour each week,” Matt laughs. His followers loved the videos and even though he stopped making them last summer, they still ask when the series will return.

“There’s nothing better than sitting out on the deck surrounded by your garden, eating what you’ve grown,” Matt emphasizes. His mother’s gardening goal each year was to grow enough ingredients to make a full salad. Matt also adopted this goal in his own garden and plants lettuce, spinach, kale and cherry tomatoes each year. Herbs, including basil and oregano, are grown in containers on their back porch. With the basil he grows, Matt likes to make pesto or basil butter, which he freezes in ice cube trays so he can easily enjoy the flavor of fresh basil throughout the winter. He also planted extra tomatoes this year in the hopes of making sauce.

Whatever produce he doesn’t grow himself, Matt buys from local farmers through farm stands or his weekly visit to Lancaster Central Market. “For a foodie, [Lancaster] is the best place to be,” Matt emphasizes.

Work brought Matt to Lancaster County in 2008 when he started at WGAL. This year, he celebrates his 15th year with Hearst Television, the broadcasting company that owns WGAL. Prior to his arrival at News 8, he worked at a sister station in northwest Arkansas for two years. 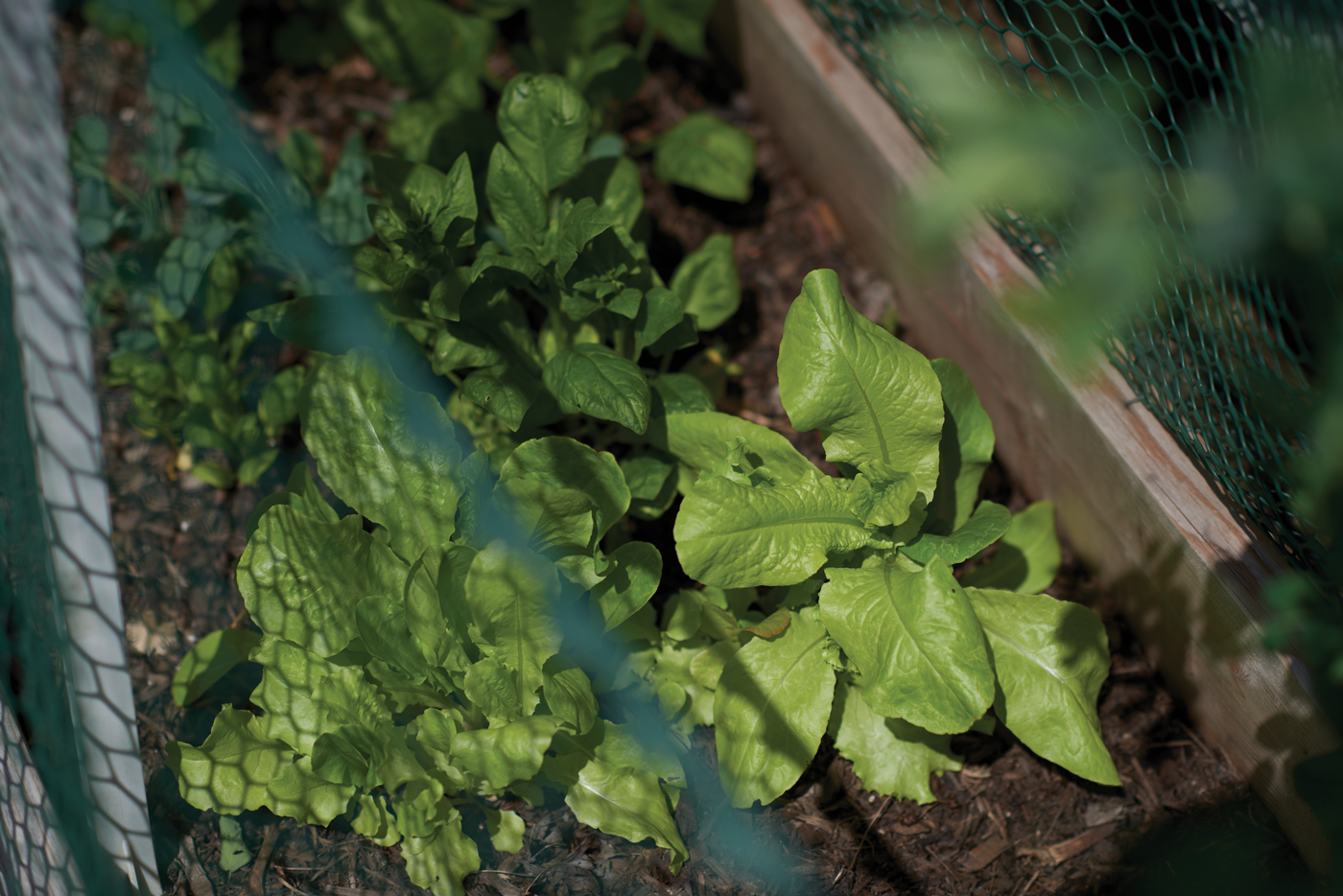 Matt’s suburban garden consists of two raised beds and a number of containers.

The food culture isn’t the only thing Matt loves about the Susquehanna Valley. As an outdoor enthusiast, Matt is amazed at the variety of experiences available in our area’s natural world. This spring, he started an Explore Outdoors segment at WGAL in which he highlights local trails and outdoor activities. He was amazed to discover the diverse ways people can enjoy the outdoors in Central PA, from disc golf and geocaching to creek snorkeling and beekeeping.

Like many couples who married in 2020, Matt and Jess had a very different vision for their wedding. Instead of the traditional wedding they originally planned, the couple decided to host an intimate ceremony at Lancaster County Central Park in July 2020. They were wed in the same spot where Matt proposed. 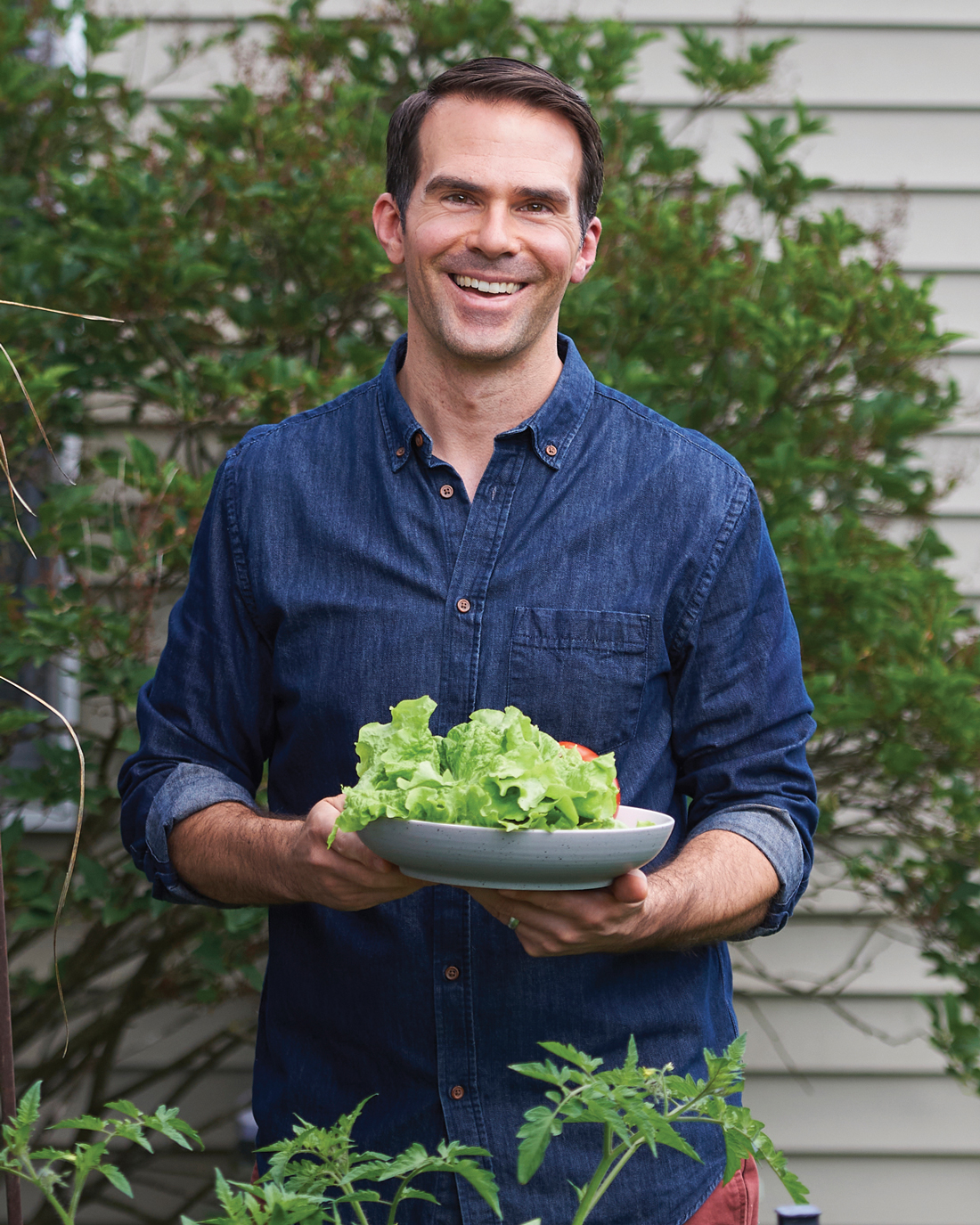 In May 2021, the Barcaro family became a party of three when Matt and Jess welcomed their first son, Grant Matthew Barcaro. Matt emphasizes how great fatherhood has been. “I didn’t realize until he was born how quickly and completely you can fall in love,” he wrote in a Facebook post announcing Grant’s arrival.

“I do wish I could get more sleep though,” he laughs. Between his work schedule and caring for a newborn, creating a consistent sleeping schedule is no doubt a challenge.

Matt can’t wait to have Grant out in the garden by his side. “I’m excited to share these experiences with him when he gets a little older,” Matt smiles. 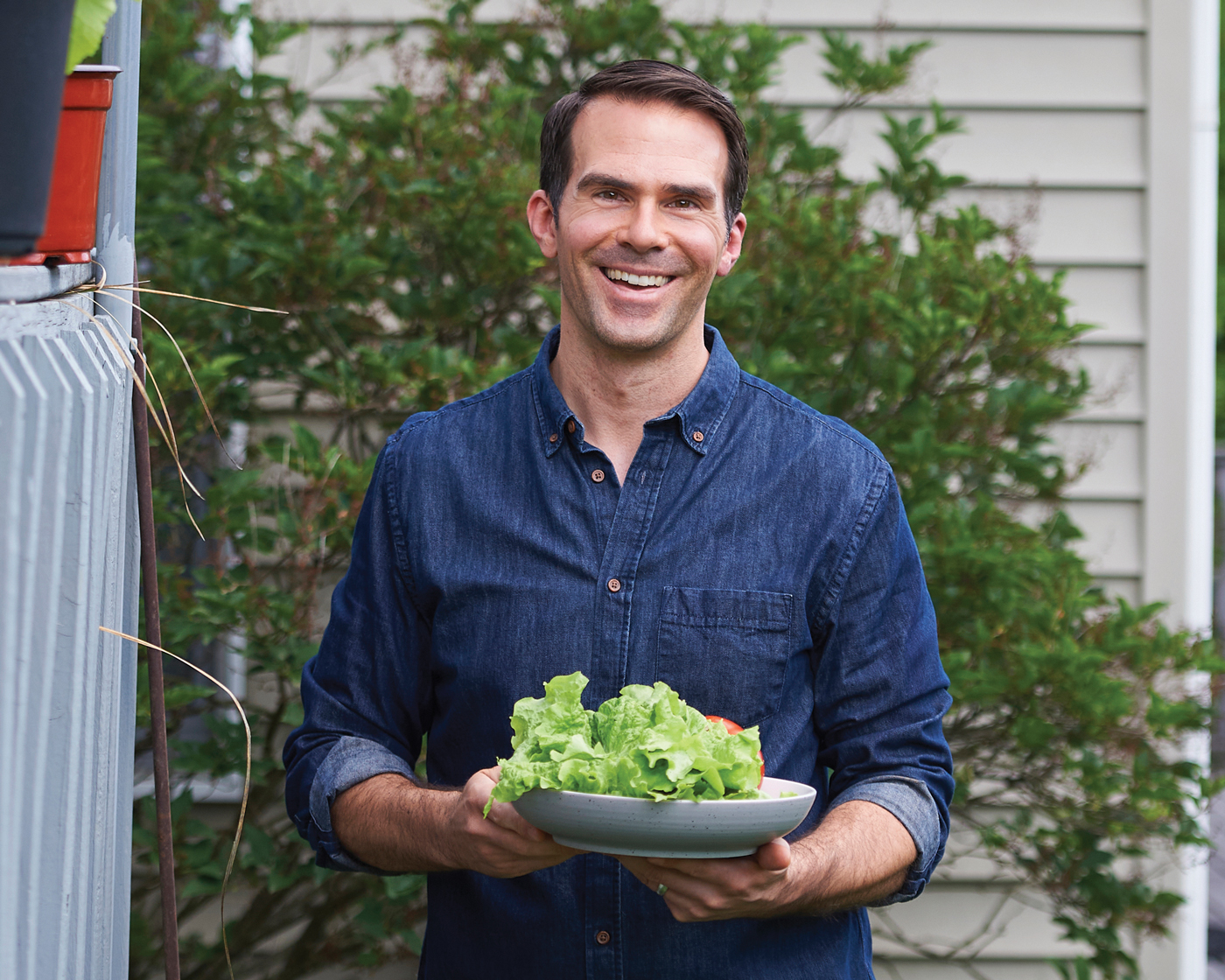