One in three people have a criminal record in the U.S., and the American criminal justice system holds nearly 2.3 million people in state and federal prisons, juvenile correction facilities, local jails and other detention facilities (Brennancenter.org; Prisonpolicy.org). This means that more than likely you or someone close to you has had to navigate the criminal justice system at some level, at one point or another. 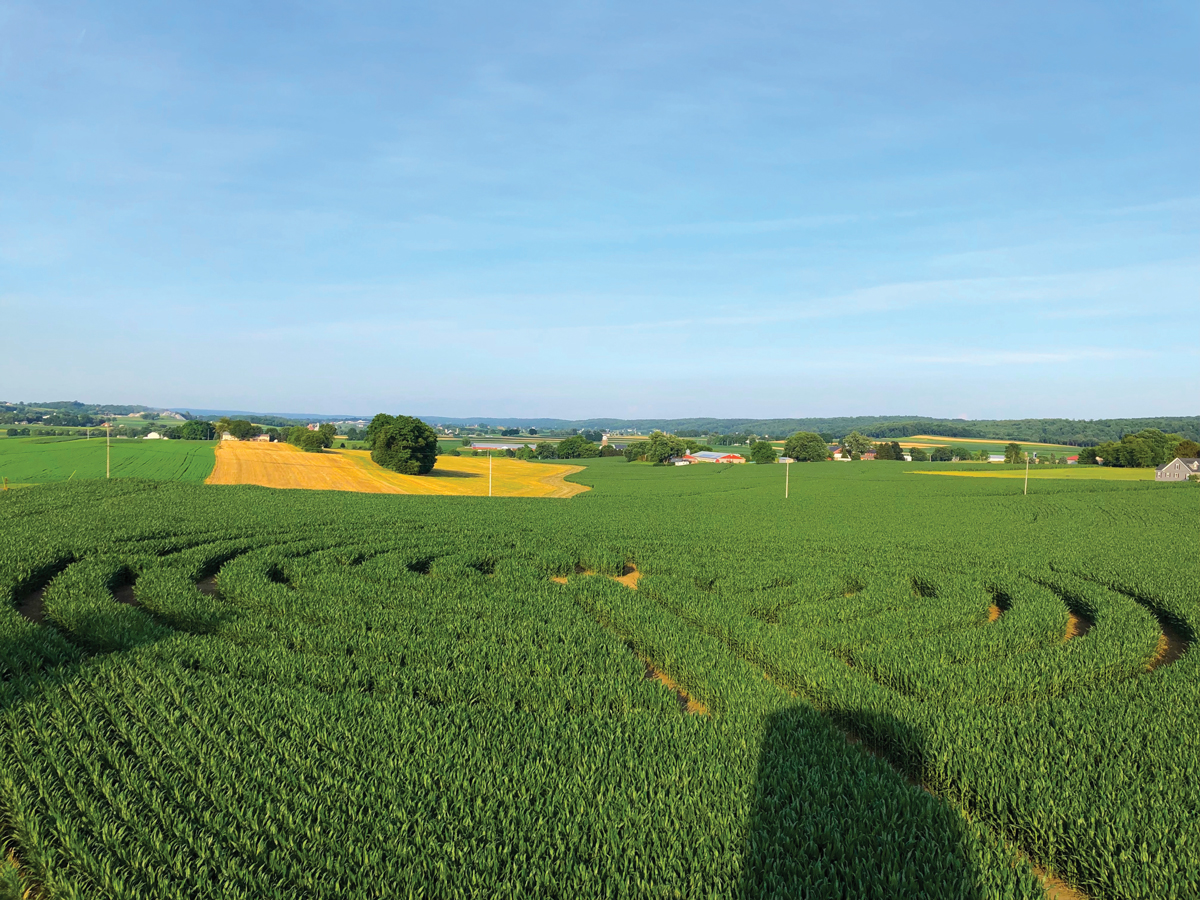 Corn maze during the growth process

Incarceration rates in Lancaster are on the decline since their peak in 2007, making strides toward progress. However, those rates are still up nearly 80% since 1985. African Americans are nearly 10 times more likely to be sentenced to prison from Lancaster than are Caucasians (Vera Institute of Justice). Despite this closeness to the topic and its wide reach, its impact is rarely discussed in smaller or more rural communities like Lancaster.

Nationally renowned and Lancaster-born artist Jesse Krimes will be bringing attention to the topic, as he is curating and co-creating a local project called Voices from the Heartland: Safety, Justice and Community in Small & Rural America. The project will bring the conversation about mass incarceration right to the table (and the farm).

60-foot image, comprised of nine quilts depicting sites from Lancaster, functions as a map of Lancaster’s incarceration data as it compares to state and national rates.

Voices is supported by the Robert Rauschenberg Foundation, Cherry Crest Adventure Farm, and the Art for Justice Fund, a project of Rockefeller Philanthropy Advisors, in partnership with the Ford Foundation. It includes an immersive cornfield maze and barn-meets-gallery exhibition. The project is aimed at exploring mass incarceration’s impact on our communities and challenging our perceptions of safety and justice.

Located at Coleman Temple Farms (next to Cherry Crest Adventure Farm) in Ronks, the Voices’ corn maze component is described by Jesse as a “physical metaphor for ‘the maze’ of the American justice system, from which it can be nearly impossible to extricate oneself.” While navigating the corn maze, visitors will encounter data and personal stories about the impact of incarceration and then arrive at the barn that serves as an exhibition space. 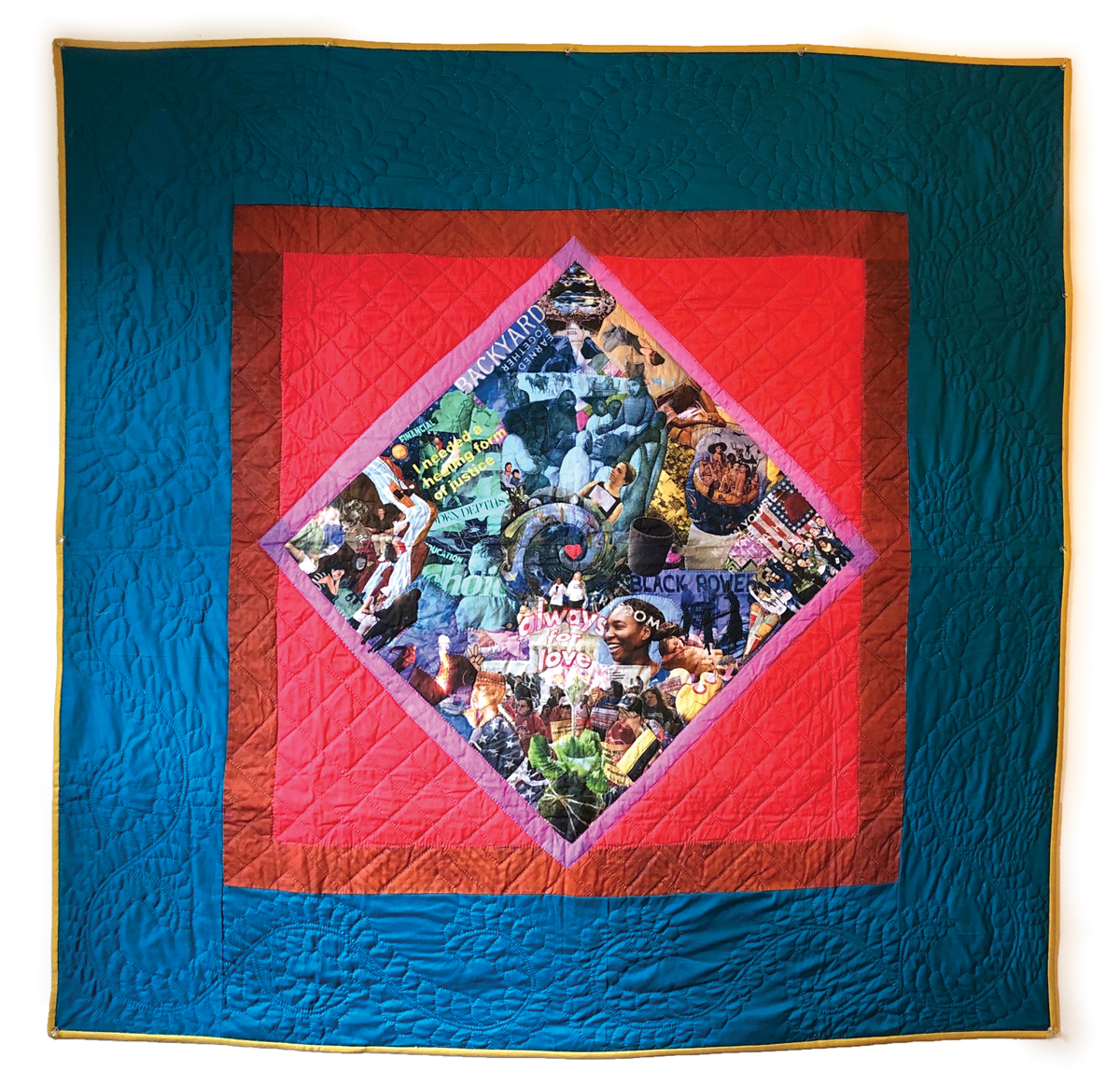 A hand-sewn quilt that incorporates imagery created through a series of community outreach workshops held by Jesse. Workshop participants were asked to collect images from newspapers and magazines relating to safety, justice, equality and freedom. Then they were instructed in image-collage techniques, image transfers and painting.

A series of hand-sewn “community quilts” featuring collaged images will be displayed in the barn gallery space on the farm property. These pieces were created in collaboration with local Amish quilters and other community members, including incarcerated and formerly incarcerated people, through a series of workshops led by Jesse. They reflect on themes of safety, justice, equality, freedom and re-entry. 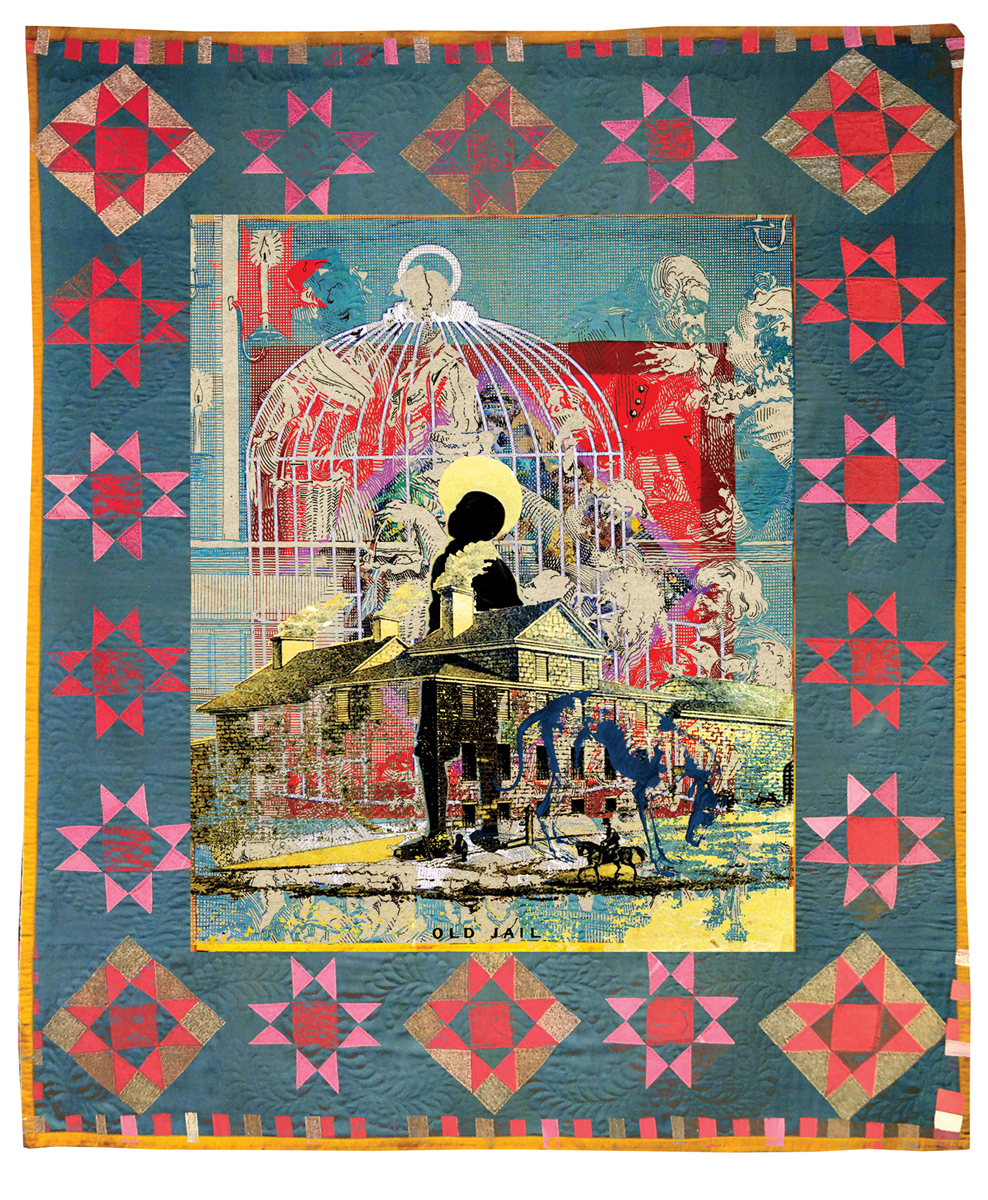 A quilt using the North Star quilt pattern (believed to be used during the Underground Railroad to signify safe passage, also used in the Amish quilting tradition) and images sourced from workshops Jesse conducted with incarcerated and formerly incarcerated men in the Pennsylvania state prison system.

The final piece in the series consists of nine quilts, together creating a 60-foot-long image that functions as a visual data map displaying Lancaster’s prison incarceration data (Vera Institute of Justice). 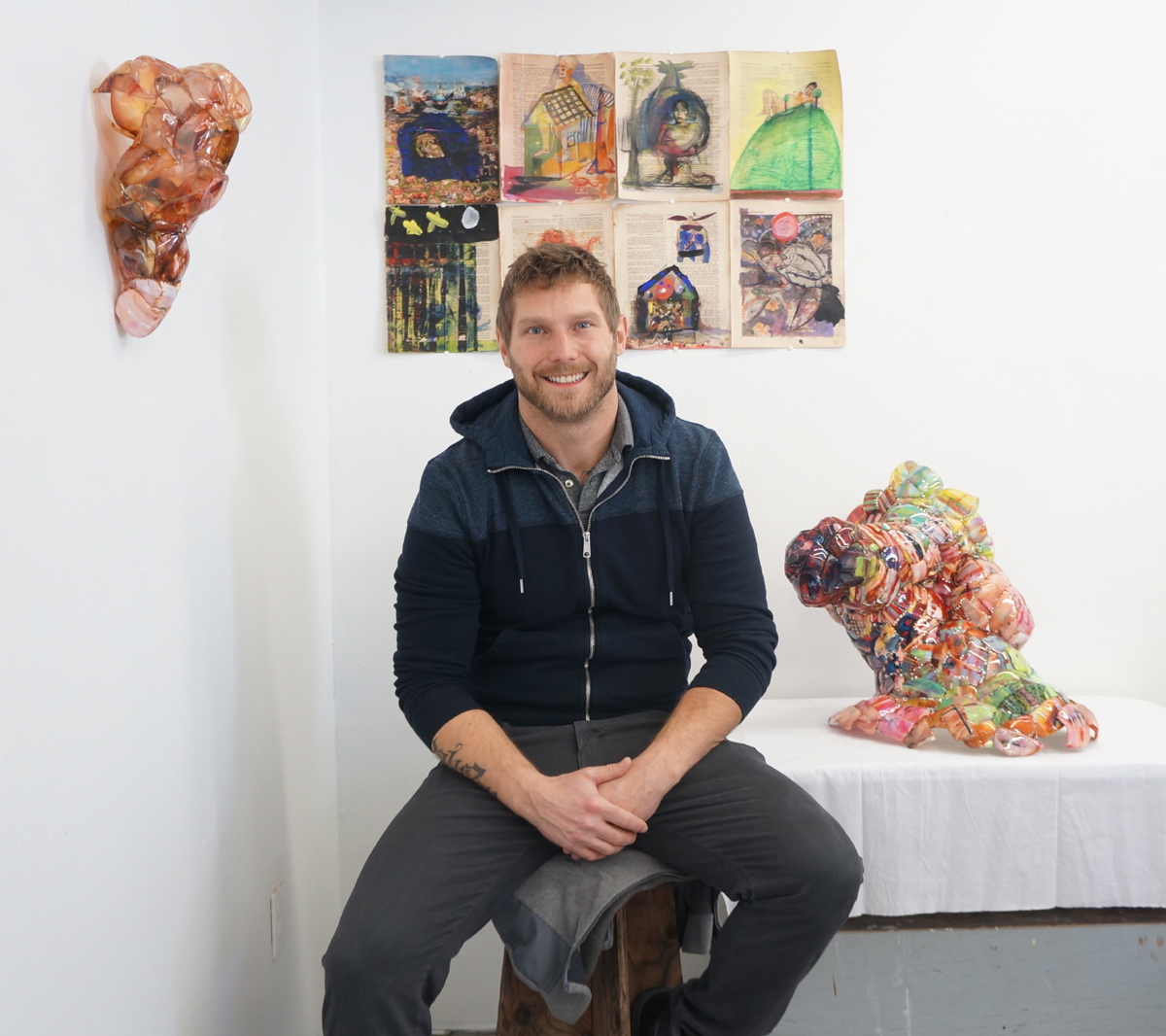 Jesse, now working in Philadelphia, was born and raised in Lancaster County, making it a poignant location for this project. He pursued an education in art, graduating from Millersville University in 2008, citing MU as the place he felt most supported and connected in Lancaster.

Shortly after graduating, he served a six-year term in federal prison. 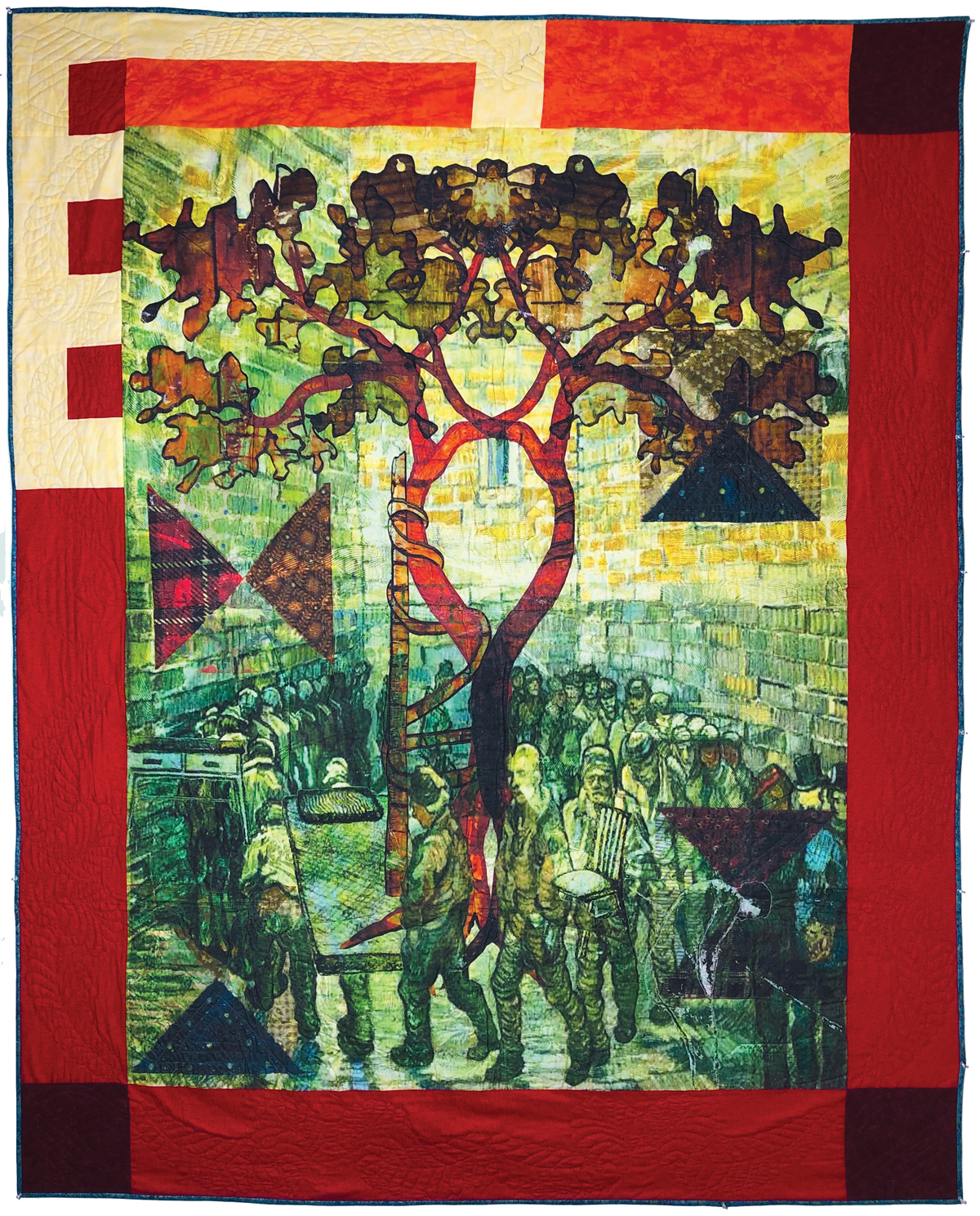 A difficult childhood and traumatic experiences “catalyzed my involvement with the criminal legal system. Since the age of 13, I’ve cycled through nearly every aspect of our criminal legal system, from juvenile probation and jail to state and federal prison,” Jesse recalls. Isolation from the community played a big part in Jesse’s previous, and many others’, uneasy relationship with law enforcement. “I decided to create this project in a more rural part of Lancaster County precisely because I believe that we need to create spaces for communities like ours to come together.”

Artistically inclined since early childhood, Jesse focused on sculpture as an art student at MU. While in federal prison, he started to work with collage elements, using what was readily available to him. This technique, developed by necessity during his confinement, has evolved into an intricate and striking series of quilt pieces. 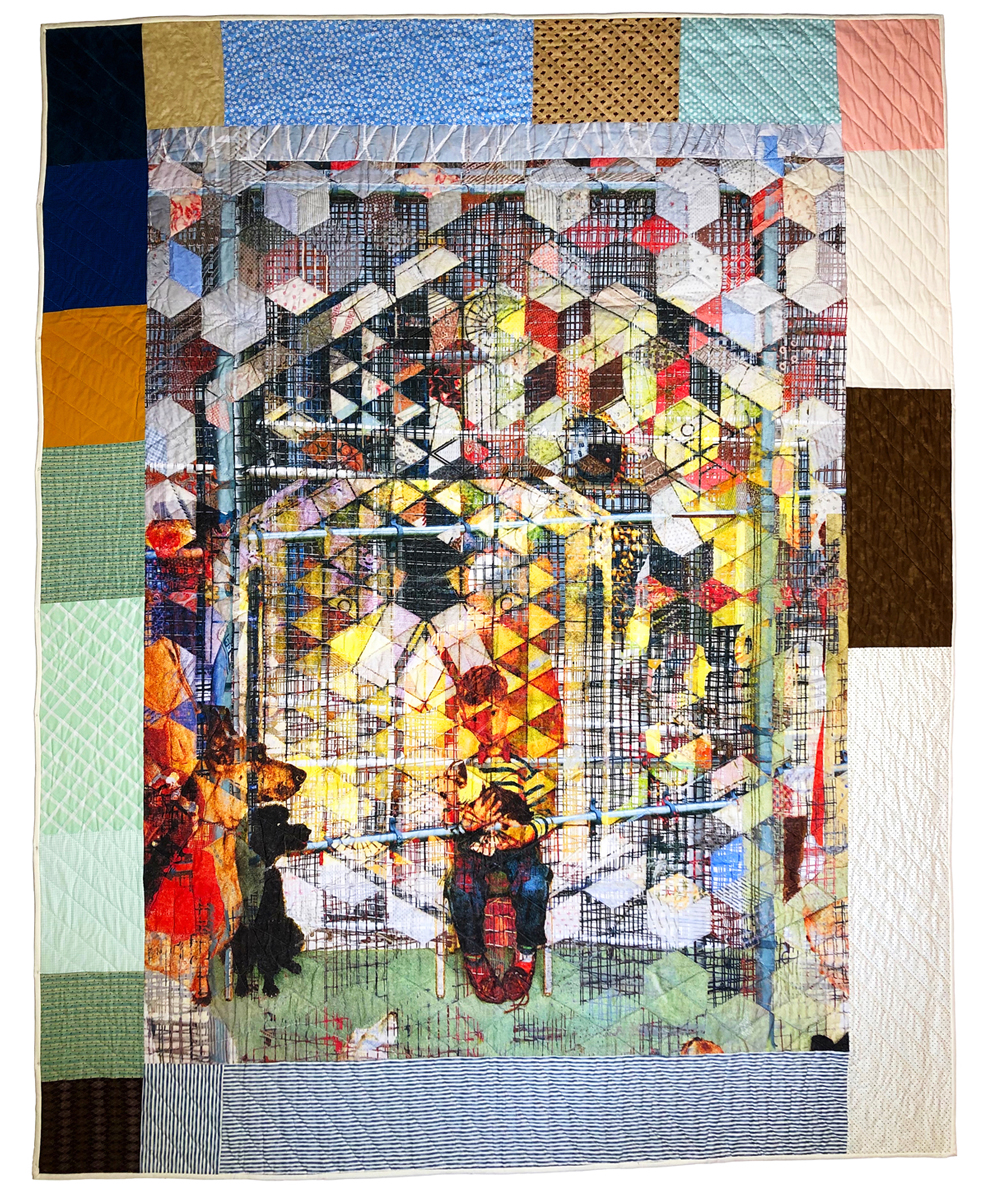 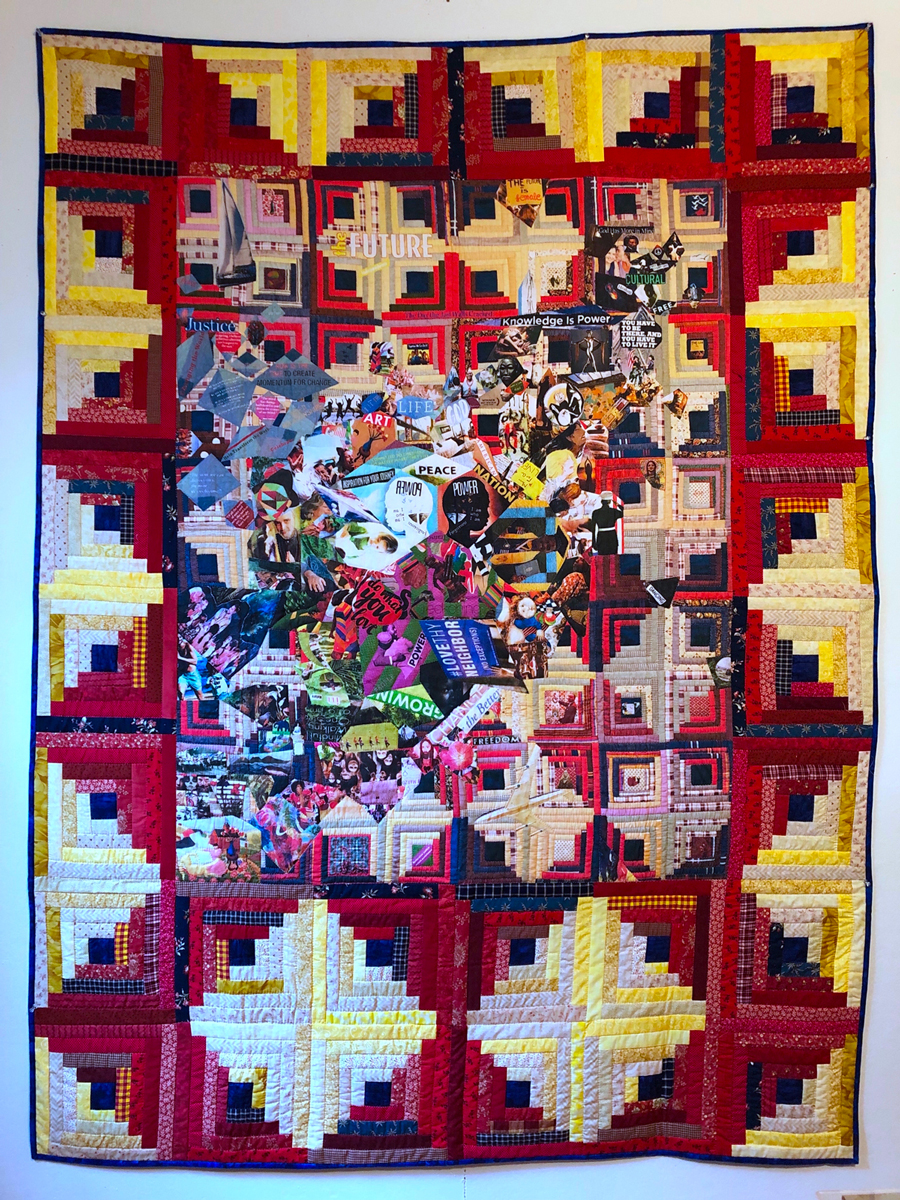 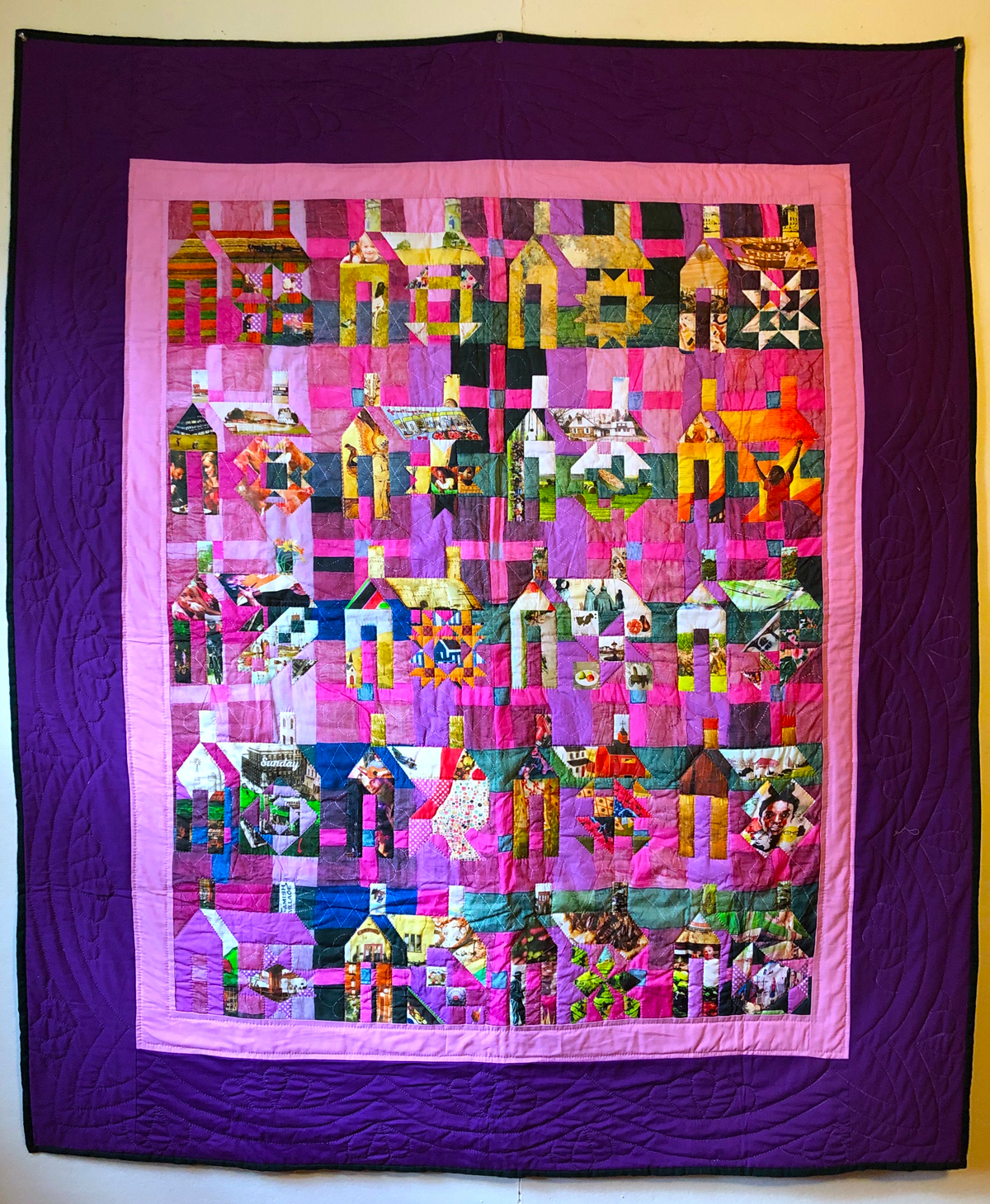 Jesse has been busy since his release in 2013, exhibiting work nationally and internationally, working on public art pieces and attending exhibitions. His experience in the already socially and justice-reform conscious, larger city art scene is bringing Jesse back to Lancaster. “Ultimately, I thought it was important to try to create an art project that engages audiences who might not typically attend an exhibition or event around criminal justice reform. Lancaster is the community I grew up in, and it seemed like the place where I should begin to repair any harm I caused and create a space for these broader conversations,” he explains.

On the role of art in the community, Jesse believes “art work challenges us to see things from new perspectives, helps reframe oversimplified and harmful narratives, and ignites opportunities for real change.”

“Voices from the Heartland” will take place at the farm of Steven and Shelly (Coleman) Temple, 180 Cherry Hill Road, Ronks (next to Cherry Crest Adventure Farm, owned by Jack and Donna Coleman). Saturdays in September, 10 a.m.-5 p.m., featuring special guests and musical performances. For event updates, visit cherrycrestfarm.com. For more information about the artist, visit jessekrimes.com.

A quilt using the North Star quilt pattern (believed to be used during the Underground Railroad to signify safe passage, also used in the Amish quilting tradition) and images sourced from workshops Jesse conducted with incarcerated and formerly incarcerated men in the Pennsylvania state prison system.