Storing wine is serious business. A cool, constant temperature, plus darkness and humidity, equals happy bottles of wine. But, as Fred Young knows, creating a wine cellar doesn’t have to be all serious – it can be a lot of fun, too.

When Fred built his West Hempfield Township home 10 years ago with local builder R.W. Zimmerman, he left the basement unfinished. But six months after moving in, he decided to try his hand at creating a fun space for entertaining.

Several years before, he had walked through a house featured on the Parade of Homes tour that showcased a walk-in wine cellar. Even though he wasn’t much of a wine drinker at the time, he kept it in the back of his mind and always dreamed of designing something similar.

His brother-in-law encouraged him to make it unique. As Fred was furnishing his new home, the designers he worked with identified his style – marked by a love of castles and the medieval time period – as “Old World.”

An engineer by trade, Fred drew up plans for a round, fortress-like room, built with the same stone that accents the front of his house. As you enter the basement, stone lines the stairway, and a suit of armor greets you at the basement’s landing. It’s fun and fanciful without being stuffy or too serious.

Fred did most of the work himself, only getting hung up on how to install a flat door on a round room (his home’s builder ended up helping him fabricate it). The door to his wine fortress is heavy, solid wood with a small barred window in the middle that he can open and close. He purchased two such doors online – the other serves as his home’s front door.

He bought two wooden bottle racks, took them apart to see how they were fabricated, and made the rest himself. In total, his cellar holds 240-plus bottles of wine. Two different types of insulation and a built-in humidifier help keep the wine in tip-top shape.

When the cellar was complete, he went to the state store to fill it up. But he quickly realized how much money he’d have to spend to keep his inventory stocked. So he picked up a new hobby – winemaking. He says he would make two batches at a time, with each batch equaling about 30 bottles of wine that only cost $3 per bottle. But as quickly as he filled the cellar, the supply would deplete just as fast, since he generously gave bottles as gifts to friends and family, who very much appreciated his winemaking hobby.

He also jokingly blames his fiancé, Theresa Chilletti. “The cellar was full until I met her,” he quips. When they first started dating, Theresa, a wine enthusiast, was delighted to discover that Fred had a wine cellar, and winemaking quickly became something they enjoyed doing together.

Although they have since taken a hiatus from winemaking, they read off a laundry list of different wines produced at Chateau Young: Amarone, nebbiolo, gewürztraminer, white merlot, shiraz, sangiovese, cabernet and more. Much of the juice was purchased from Rothsville-based Cooper’s Hill Farm.

They gave me a bottle of their homemade gewürztraminer, and I really enjoyed it. It was light, bright and easy to drink. Can’t ask for much more than that!

What I liked most about Fred and Theresa is that they aren’t stuffy, snooty wine-folk. While they have a beautiful, hand-crafted wine cellar reminiscent of a medieval castle in their home, they are as down-to-earth as wine drinkers get. “We’re not connoisseurs or anything like that, and there’s nothing high-end in there,” says Fred. “It’s just average, run-of-the-mill wine.”

There’s almost an entire column (maybe 20 bottles or so) of Apothic red – a California table wine they describe as one of their favorites – some Australian Yellow Tail, and several bottles from Washington State’s Chateau Ste. Michelle. They also like visiting local wineries and aren’t ashamed to reveal that they like some boxed wines, too.

Fred says he’ll never forget a piece of advice from a former neighbor who made his own wine: “He said never to waste money on expensive wines from France,” Fred recalls. “He said some of the best wines come from California.”

Fred and Theresa say they use their wine cellar every day and don’t save wine for special occasions. “People who know us know we rarely leave the house without wine,” Theresa says. “We’ll go kayaking, four-wheeling, on day trips, and we always bring a bottle with us.” (Being not at all outdoorsy, I had never thought about fitting a bottle of wine into a kayak. Turns out, it’s difficult. So, the pair found wine bags online that are malleable and hold an entire bottle of wine.)

And the craftsmanship doesn’t stop at the cellar and the wine. They also love creating wine-themed crafts, including bottle stoppers, painted wine glasses and cork art. Their 2015 Halloween costumes perfectly exhibited their love of wine and the fun they have with it. Theresa dressed up as a bottle of Apothic red that included a beautiful and perfectly detailed bottle label that was hand-embroidered by her mom. Fred dressed as a corkscrew that he created by wrapping a pool noodle in tin foil and spiraling it around his body. He topped it off with a long orthopedic back pillow.

The 17 members of the Mason-Dixon Wine Trail – Adams, York and Lancaster counties, plus northern Maryland – will once again usher in spring with a tank/barrel-tasting event. Participants will have the opportunity to sample wine, tour the wineries, visit with the winemakers/owners and enjoy lite fare during this educational – and tasty – experience. Commemorative glasses will also be distributed and a 10% discount on wines/spirits at participating locations will be offered. Tickets are $25 (good all three weekends) and can be purchased through yorkpa.org. 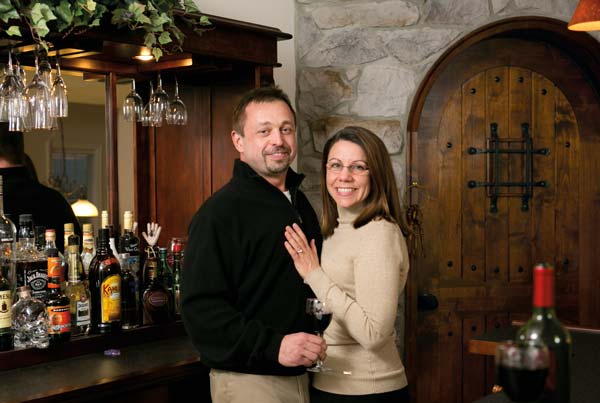 Fred Young not only built his own wine cellar, but he and his fiancé, Theresa Chilletti, also became winemakers in order to fill it.