The success of Hong Kong Garden can be attributed to two key elements: consistency and family. The restaurant, which will celebrate its 36th anniversary in April, has established a solid reputation for mixing great food and service with a family atmosphere.

Owners Steve and Susan Quan have come to view their customers as extended family. “We’re a family restaurant, and we’ve been blessed with a lot of very loyal customers. We’re now seeing several generations of families, including one or two five-generation families, and that’s really neat,” says Steve.

According to Susan, “In the past year or two, we’ve been getting a younger crowd. They’re discovering that they don’t have to do Asian fusion; the ‘basics’ are great.”

Susan’s parents, Wing Kai and Ping Wan “Jennie” Mak, started the business in 1980. The Quans have owned it since 1991. Like her parents, they are hands-on owners – you’ll always find one of them at the 120-seat restaurant. During school breaks, you may also find their son and daughter, Ryan and Emily (who both grew up in the restaurant), on the premises as well. Steve says that while both children have been exposed to all aspects of the business, he and Susan agree they would like them to graduate from college and become involved in careers of their choosing and then come back into the restaurant if they so desire. “It’s what we did. We both have degrees and were working outside of the restaurant when we married in 1990,” Susan explains. “A year later my dad became ill, and we were asked if we wanted to run the restaurant.”

At the time Steve was employed full time as a chemical engineer. After some consideration, the couple agreed to take over the family business. Ownership entailed defining their roles – Susan at the “front” of the house with Steve focusing on the “back of the house” or kitchen. “As a chemical engineer, he was used to following formulas; here he was using food ingredients instead of chemicals,” Susan says with a smile.

Steve recalls that time period as being a hectic one. He not only continued to commute to his full-time job, but he also was learning the workings of the restaurant from his father-in-law. He also learned from some of the restaurant’s chefs along the way, including head chef Cham Mak, who started at Hong Kong Garden six months after it opened and is still in the kitchen today.

Steve says that having long-term key kitchen personnel onboard is a factor in maintaining the consistency of the food, plus it allows him the opportunity to spend time with customers in the dining room. Hong Kong Garden’s philosophy centers on providing generous portions of good-tasting food at reasonable prices. Fresh, high-quality ingredients are also an important part of the equation. More of those ingredients are being sourced locally, including in-season vegetables such as asparagus.

Consistency also extends to the menu, which is extensive and features what both Steve and Susan call “the basics” of Chinese food, including fried rice and chow mein. Top sellers include hot and sour soup, General Tso’s chicken, and egg rolls that are hand-rolled and filled with vegetables that are sliced on-site.

The menu itself is tweaked every year or two, but there are some things that don’t change such as the hot sauce that’s made using a family recipe. Steve says that new items, such as the Steve Special and Imperial Shrimp, employ elements of Chinese cuisine.

Every meal is prepared fresh to order, which also allows for custom requests to meet special dietary needs or to tweak the spiciness of a dish. Brown rice is also available, and steamed entrées may be ordered without sauce. “We’re getting more and more special dietary requests,” Steve notes, adding that vegetarian dishes – including those with tofu – are becoming more popular. “We have a number of guests who prefer vegan dishes,” Susan confirms.

The Quans always look forward to welcoming guests to the restaurant in February. February 8 marks the start of Chinese New Year (the Year of the Monkey), while Valentine’s will no doubt be a weekend-long celebration since it falls on a Sunday this year.

Like many couples, Susan and Steve will celebrate both occasions together. They’ll also be working to ensure that their guests enjoy their special nights out. Even after 25 years, Susan says that following the guidelines they established when they took over the business continues to be their ultimate goal. And, although they may have differing opinions now and then on issues relating to the restaurant, they’ve agreed to let the partner in charge of that particular aspect of the business have the final say. They also continue to agree that business issues must stay at the restaurant and not follow them home. “Most couples don’t have a lot of quality time together, but we’re the opposite – we spend a lot of time together. So, when we go home, we give each other a bit of space. We enjoy our kids and their activities and each other. We don’t bring the business home,” Susan explains. “Likewise, we don’t bring any differences of opinion that we have at home into the business,” Steve adds.  “People often comment how well we work together,” Susan notes. “We’ve made it work, but we’re still learning.” 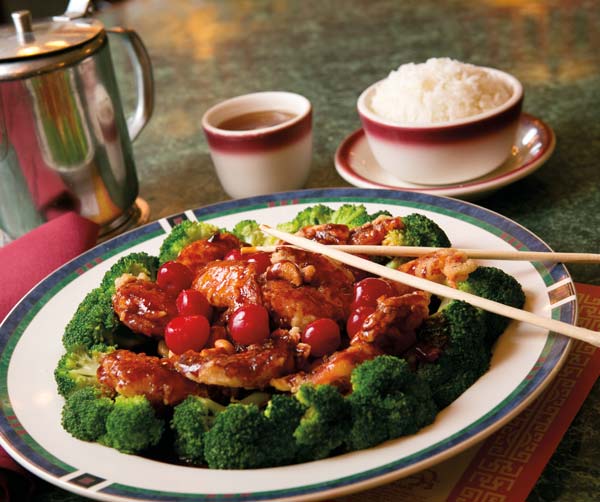