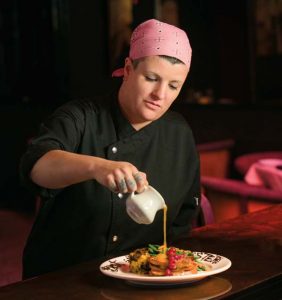 Despite offering inventive dishes for Thanksgiving dinner, the Belvedere’s owner, Dean Oberholtzer, and executive chef, Corinna Killian (pictured), agree that guests prefer to take the traditional route. “We’ve tried to do different things over the years, but guests want a traditional Thanksgiving dinner,” Dean says. “About 70% of our guests order our turkey entrée,” Corinna agrees.

The Belvedere, which will be celebrating its 20th anniversary next year, began opening for Thanksgiving 15 years ago. “Our regulars asked us to open, so we tried it,” Dean says. “It’s become a huge day for us. Some guests make reservations for the next Thanksgiving as they head out the door.”

Christmas Eve is also one of the Belvedere’s most-requested nights for reservations. “People will designate the table they want that night,” Dean says, noting the attraction is the holiday décor and the creative menu that Corinna designs. “We do a lot of lobster dishes that night.” Corinna adds, “A lot of steaks are ordered that evening.”

As for Thanksgiving, Corinna, who has been at the Belvedere for nine years (the last four as executive chef), and her staff will roast 15 turkeys and prepare all the trimmings using fresh produce from local farms. The dish she prepared for the cover includes turkey, stuffing, green beans, cranberry sauce and potato/root vegetable au gratin. And, we can’t forget the gravy! 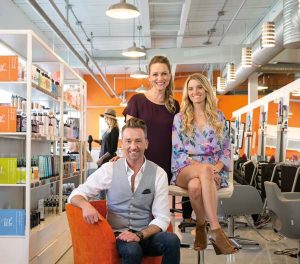 Nine years ago, Ana Kitova (center) opened a salon that was a bit different, as it is located in an old manufacturing building on the west side of Lancaster. Frilly it was not. Instead, it was defined by bold colors, industrial elements and minimalism. It turns out Luxe was at the forefront of a trend – Urban Chic has become all the rage.

Since then, Ana has gained two partners – Nate Fox (left) and Lindsey Kress (right) – a second location at the Shops at Brighton in Lititz and a “dynamic team” that is comprised of 80 employees. “We’re always receiving inquiries,” Nate says of expansion opportunities. “We’re waiting for the right project and location before we make our next move.”

For now, however, the two current locations are their top priority. “We completely remodeled the Lititz location before opening in 2016,” Nate explains.

In preparing to celebrate Luxe’s 10th anniversary next year, the trio deemed it was time for the Lancaster location to undergo a makeover of its own. In July it was freshened with new paint, new flooring, new furnishings and new chairs at each of the hair-styling stations.

It had long been Ana’s dream to add med-spa services to the spa menu. She has achieved her goal – Dr. Maxwell Adams serves as its medical director, while Adrienne Hughes is the clinical director and medical esthetician. Under their direction, the spa now offers Botox, fillers such as Juvederm, laser treatments, micro-blading and more in addition to the regular spa treatments. 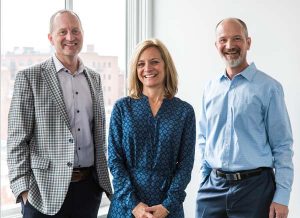 In 1968, Elam G. Stoltzfus, Jr. launched his own home-building company. He loved to build houses, but even more, he derived pleasure from working with his customers. His goal was to always exceed their expectations. His Parade of Homes entries were considered must-sees.

Over the past nearly 50 years, the company has diversified by adding commercial construction (churches, medical, educational and corporate projects), adaptive reuse (the Keppel Building on the 300 block of N. Queen Street), historic preservation (Steeple View Lofts on N. Water Street), remodeling and residential communities throughout South Central Pennsylvania to its resumé. The newest community in Lancaster County, Landis Farm (East Hempfield Township), is nearing completion of Phase One and is in pre-sale mode for Phase Two. The models feature 21st century amenities such as the “lifestyle triangle” (kitchen, dining, entertainment configuration) and the “Costco room” (a pantry that accommodates bulk items).

Most recently, the company was again recognized as one of the region’s Top 50 Fastest Growing Companies by the Central Penn Business Journal.

Today the company is being led by a second generation of Stoltzfuses – EG’s children, Chad, Colleen and Brent (pictured above) – along with a seasoned management team. In addition to overseeing the business, they are carrying on EG’s belief that it is a responsibility to help those in need. As a result, the company has supported nonprofit organizations such as Tabor Community Services, Homes for Hope, Habitat for Humanity, Mennonite Central Committee, North Star Initiative, Family Legacy Missions International and Water Street Mission.

Note: EGStoltzfus will be participating in the Holiday Homes on Parade tour being held December 1 & 2. For details, visit holidayhomesonparade.com 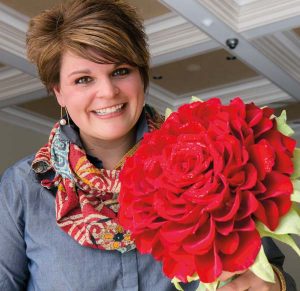 Fifteen years ago, Jill took over a small convenience store in Mount Joy and opened her floral-design business in time for Valentine’s Day. Success was instantaneous – to the extent that she had to rent facilities around town in order to store her seasonal decor and other supplies. “It was exhausting!” she says. At the shop, employees worked elbow-to-elbow to prepare for weddings and other events.

On November 1, that will all change. Floral Designs of Mount Joy is moving west on Main Street and taking up residence in a state-of-the-art building that Jill and her husband, Shawn Erb, designed. Shawn, who operates his own construction company, has devoted the past two years to the project. The results are breathtaking. “It’s his design and my take on ergonomics,” she says of their collaborative efforts. The public can see the results for themselves during an Open House that is planned for November 7-9. “It will be decorated for Christmas,” Jill assures.

Jill hopes her customers are wowed. “They’re the best part of the job,” she says. “As designers, we take pleasure in meeting their needs, whether it’s for a joyous occasion or a sad one.” And, she can’t wait to introduce her employees to their new digs. “They’re the best,” she says. “They’ve been along with me for the journey and have been so supportive.” 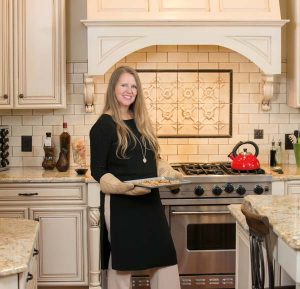 With the exception of two years spent selling real estate in Florida during the late 80s, Anne’s turf has always been Lancaster County.
Anne earned her Pennsylvania real estate license in 1995 and went on to work for a number of local firms. In becoming affiliated with Sotheby’s International Realty, which is typically found in more exclusive locations like Beverly Hills, Manhattan and London, Anne turned the tables and used the talents she reserves for clients – personal attention, hard work, local knowledge and sheer willpower – to convince the company that Lancaster is worthy of its presence. It probably also helped that in 2012 she was the top agent in Pennsylvania for closed sales volume.

While HGTV and other home-related shows tout tactics such as baking cookies or a pie in order to make a house smell more inviting to prospective buyers, Anne, who was photographed in a Bent Creek home she has listed, has a different theory. “Allergies have become such a big issue,” she remarks, noting that some people are very sensitive to the smell of vanilla, while others can’t tolerate scented candles. “It defeats the purpose,” she says. “People with allergies just want to get out of there!” Besides, Anne is too busy to bake cookies. “It’s probably been 15 years since I baked cookies – for anyone! It’s easier to go to La Dolce Vita.” 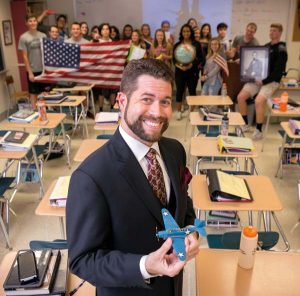 A junior-level government and economics class. I’m envisioning an older gentleman pontificating about Adam Smith. Disinterested students would be catching some precious post-lunch zzz’s. This might be a tough photo shoot.

Instead, photographer Nick Gould and I walked into a classroom that pulsed with energy. The adoration the students have for teacher Ben Mitchell is palpable. When asked what makes Ben Mitchell the best teacher in the county, hands wave in the air. “He’s so good at explaining things,” says one. “He’s very relatable,” says another. “He connects things we are learning about to our own lives,” another interjects. “He makes government and economics fun,” another remarks. “He relates to our lives,” one student points out. “He cares about us,” says another, which prompts her classmates to nod their heads in agreement.

The students so enjoy the class that they came up with the premise of the photo seen here – each wanted to hold something that relates to what he or she feels represents government and economics. The props ranged from the American flag and a portrait of Abraham Lincoln to a stapler and a model plane. Ben went with the flow and supported their idea (as did Nick).

Ben, it turns out, is a Hempfield grad (by way of Charleston, South Carolina). He’s been teaching in the district for nine years. What does he love about the teaching process? “The best part of my job is when I can make a difference in a student’s life – whether it’s once in the course of the school year or every day.” 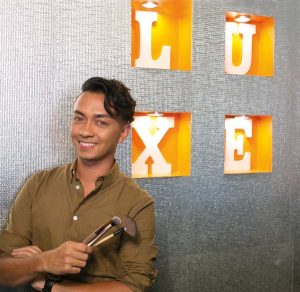 Whether it’s special occasions or special effects, Lionel can provide the perfect makeup. Born in Hawaii, Lionel was working in a salon – “I was between majors,” he says of college – when a customer, who worked for a cosmetics company, suggested he should become a makeup artist. Following her advice, he went on to become a certified M.A.C. makeup artist and settled in California, where clients included stars such as Alicia Keys and Queen Latifah. Five years ago, he joined the team at Luxe. “My grandfather lives here,” he explains of his path to Lancaster 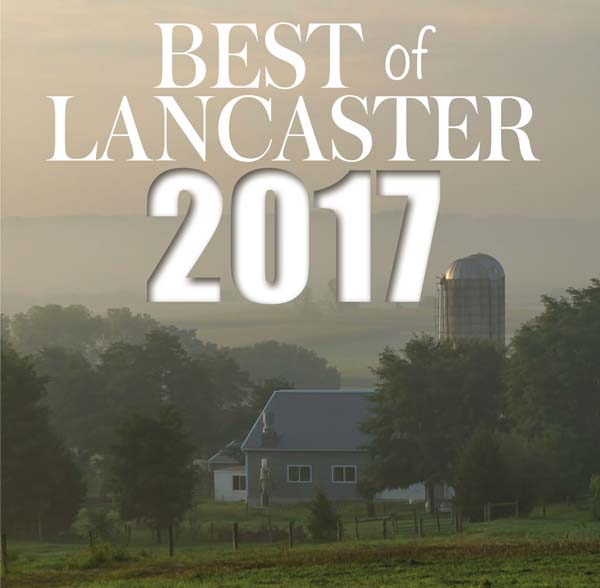