Last summer’s pop-up wildflower field in Manheim Township captivated visitors who stopped to admire the display. Birds, bees, butterflies and flower lovers will once again benefit from Jay Garber’s generosity, as season two is primed to burst into bloom in the next few weeks.

Jay Garber, who owns the farmland that surrounds his business, Garber Metrology, wanted to do “something fun” with the cornfield that sits at the corner of East Oregon and Kissel Hill roads. “I really wasn’t getting a good return on the corn,” he explains. “It wasn’t very profitable, and it sure wasn’t any fun.” After all, from a sightseeing perspective, cornfields are as common a sight in Lancaster County as are cows.

Jay thought flowers would be fun and eye-catching.

However, the “fun” aspect of his plan was accompanied by a more serious ulterior motive. Jay is aware of the plight of the honeybee: Their numbers are decreasing at an alarming rate due to Colony Collapse Disorder. 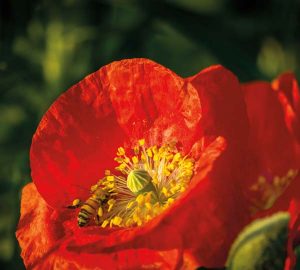 Bees, of course, play a vital role in food production by acting as pollinators. It is estimated that 1/3 of the food we eat is dependent upon pollinating insects. If Lancaster County’s reign as the “Garden Spot of America” is to continue, bees will be an essential part of the equation. In Jay’s estimation, a field of wildflowers would do wonders for the local bee population. He went a step further and contacted the Lancaster County Beekeepers Society and invited them to place hives on the property. A member of the organization took him up on his invitation and tends to the hives that were installed.

Jay admits he is wild about wildflowers. “I’ve always grown them at home,” he says. “They got a little out of control at one point, so my wife said, ‘Enough!’” Jay also loves butterflies and birds. “I like to feed the birds at home,” he adds. And, he loves bees for the honey they produce.
Jay turned to Larry Eidemiller of Castlerock Landscape & Lighting in Willow Street for help in converting the field from corn to wildflowers.

The two found Vermont Wildflower Farm, seed specialists since 1981, whose products are (according to its website) “100% pure, non-gmo, open-pollinated and chemical-free.” Jay placed an order for mixes that would do well in the Northeast and would encourage pollinators to visit. “We received something like 150 pounds of seeds,” he reports. 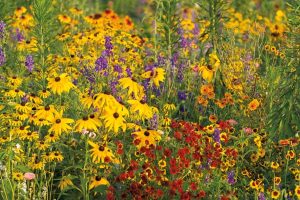 By June, the wildflowers had burst into bloom and were literally stopping traffic. “Kim Lemon might have had something to do with that,” Jay says of the WGAL news anchor. “She put it on her Facebook page.” Jay says he purposely left space for three or four cars to pull off the road and park. “But, at any given time there seemed to be 30 to 40 cars there!” he recalls. “I didn’t expect that kind of reaction.”

Indeed, word spread like, well, wildflowers. Residents from nearby senior-living communities were regular visitors. Families posed for portraits in the colorful field. Wedding parties utilized the gorgeous backdrop. Children discovered magic in the birds and butterflies that fluttered about the field. Jay tells of his stepfather watching a father carry his handicapped child into the field. “All he could talk about was the smile he saw on that child’s face,” he says. Visitors were respectful of the sign that greeted them with the legend, “Pictures – Yes. Picking – No. Enjoy.”

Jay was touched by people’s reactions. “People would send us notes, cards and emails,” he recalls. “They’d call to thank us. They’d even stop by the office.” A frequent visitor left a guest book in the field for visitors to sign. It’s now in the reception area at Garber Metrology.
Jay adds that the only complaint he received had to do with bees. There were too many! It appeared his plan was working. 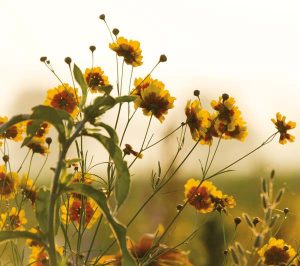 Visitors will also be aware of grapevines growing adjacent to the field. Jay contracted with Jan and Kim Waltz of Waltz Vineyards in Manheim to plant chardonnay grapevines. He plans to release a private label wine in 2018. He also would like to expand the vineyard with cabernet franc grapes.

Additionally, he’s planted the field across from his office with buckwheat. “Those plants will produce white flowers,” he remarks. “The road has a sharp corner there; I didn’t want a lot of color that would distract drivers.”

He is eyeing the barn that sits on the acreage and is mulling over ideas on how to put that to use. “Maybe some sort of venue,” he muses. He’s also toying with the idea of adding a gazebo to the wildflower field.

“I’m excited to see what happens this year,” he says. 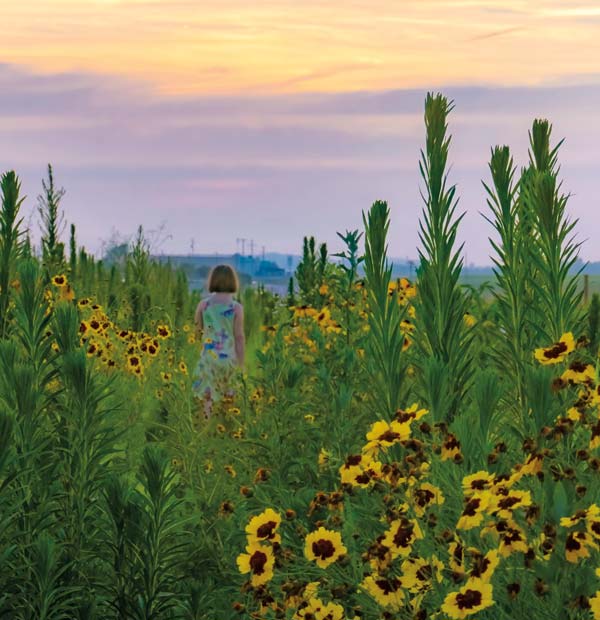