For Maytown’s Pat Vogel, gardening provides an on-going connection to her childhood as well as her late husband, Bill Vogel. In her estimation, “gardening is therapy.”

Pat grew up on a small farm on the outskirts of Maytown. “We had cows, which I milked, and we raised a lot of tobacco,” she recalls. “In fact, my backyard was once a tobacco field.”

When one of Pat’s uncles died suddenly, her father, James F. Johnstin, carved out a lot on the farm where his sister-in-law could build a house. That gesture launched a family tradition of sorts. Building lots were gifted to both Pat and her brother, Tom Johnstin, on the occasion of their weddings. “I’ve lived here for 43 years,” she says of her 1-acre wedding gift. Since then, other family members have moved into the neighborhood. In addition to her brother, Pat’s daughter as well as a nephew are neighbors. Her niece lives in the family farmhouse that is visible from Pat’s backyard.

Pat and Bill met through working at Armstrong World Industries’ ceiling plant in Marietta. “We both graduated from Donegal, but because he was older, we didn’t know each other,” she explains. Bill, who grew up in Florin, was an athlete – at one time, he was a minor-league pitcher for the Detroit Tigers (and got a tryout with the Yankees) and later played semi-pro football. He was also an outdoorsman and avid hunter.

He also had a creative streak and designed their home himself. Bill was ahead of his time in that he designed the Cape Cod with the future in mind, as it provides for one-floor living. Over the years, a family room and a sunroom were added.

Bill’s love of the outdoors was reflected in the backyard, where he planted trees, installed a large vegetable garden and built a tree hut for the couple’s grandchildren. “The trees all started out as little sticks that he got through Arbor Day promotions,” Pat notes.

After leaving Armstrong, Bill became a bus driver for the Donegal School District. As Bill was driving to work one foggy morning in the fall of 2008, he was involved in an accident that left him a quadriplegic. Ironically, the Penn State fan (and long-time season-ticket holder) was at Magee Rehabilitation Center in Philadelphia at the same time Adam Taliaferro (a player who was recovering from a spinal cord injury) was a patient. “Joe Paterno visited a lot, which thrilled Bill to no end,” Pat remarks.
After being released from Magee, Bill returned home to Maytown. Pat became his caregiver. She knew he missed being out in the yard. Maytown resident Tom Jones, who was in the process of expanding his lawncare and landscaping company with hardscaping services, offered a solution. He asked Pat if she would be interested in having him build a pergola on her property. He would gain expertise, and Bill would be able to enjoy the outdoors.

Pat loved the idea and gave Tom the go-ahead. Tom designed a beautiful outdoor-living feature that is handicap-accessible. “It was wonderful,” Pat says. “It allowed Bill to be outdoors.” The pergola became a gathering place for family and friends. “Every summer I have a get-together for the girls I worked with at Armstrong,” Pat says. 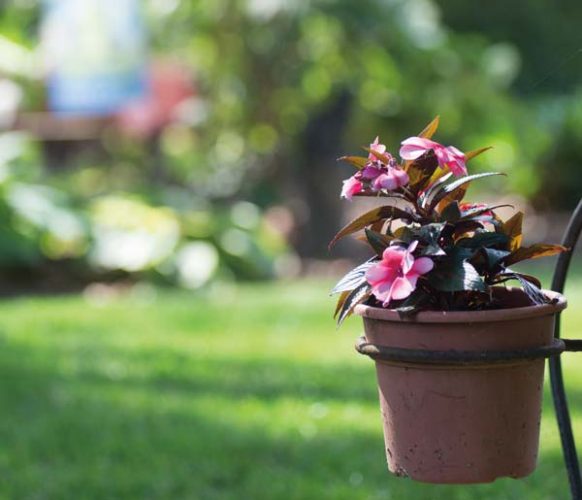 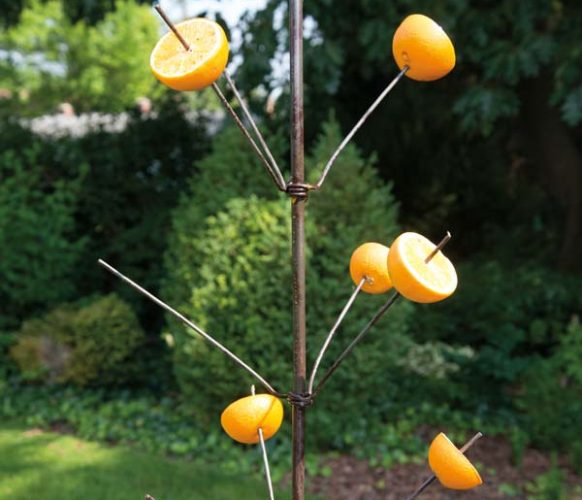 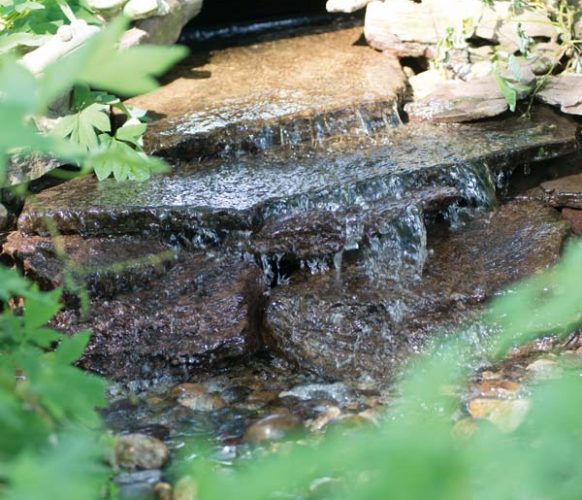 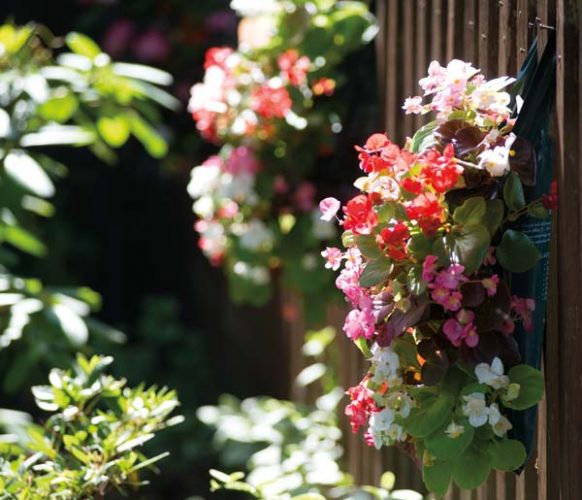 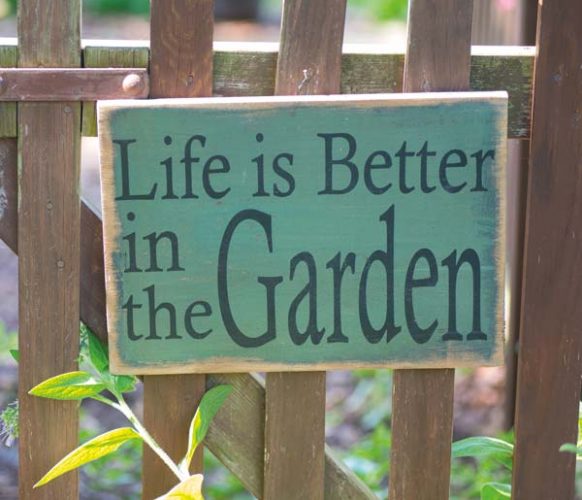 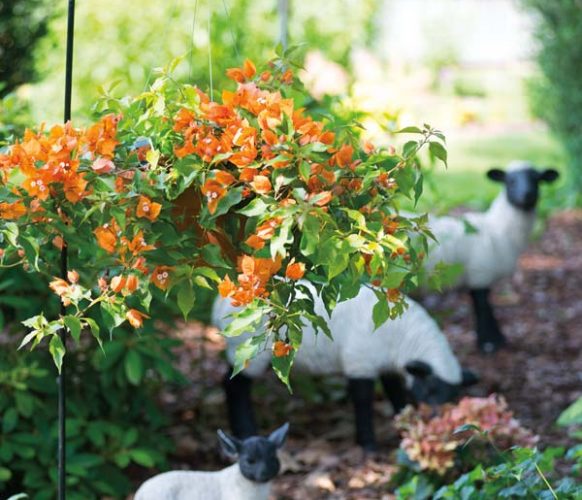 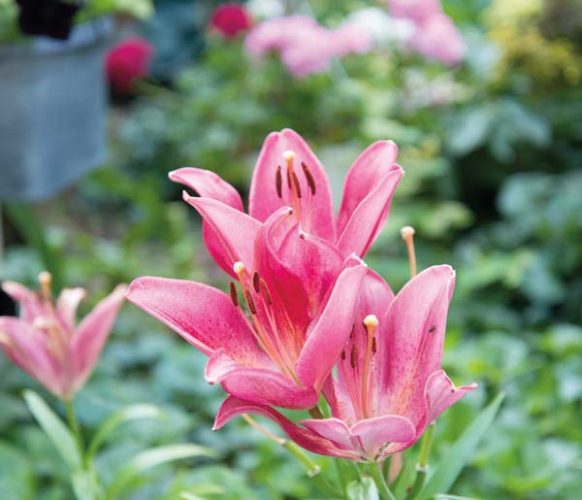 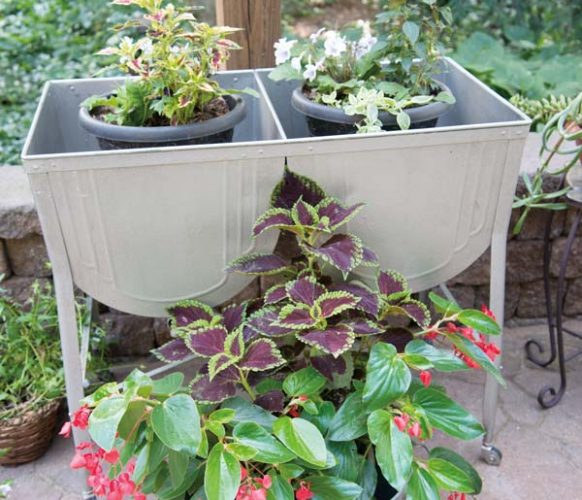 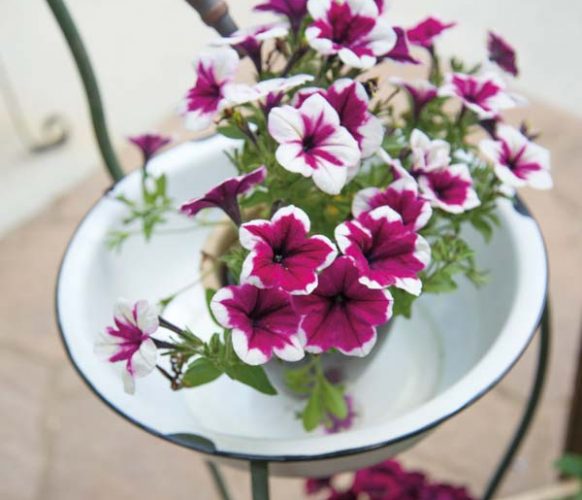 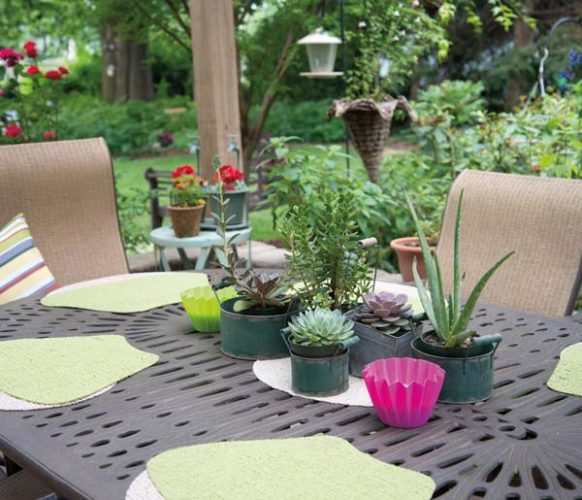 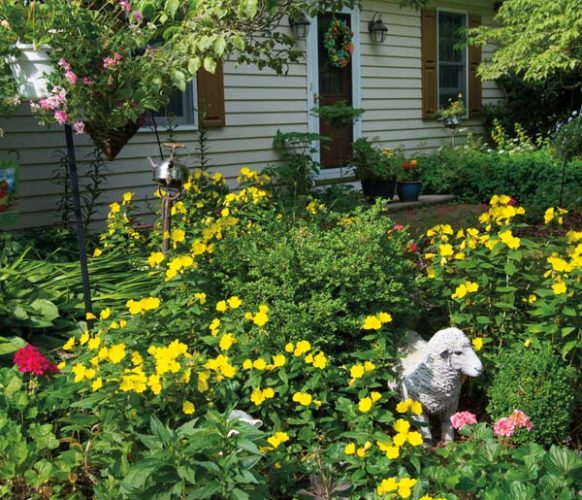 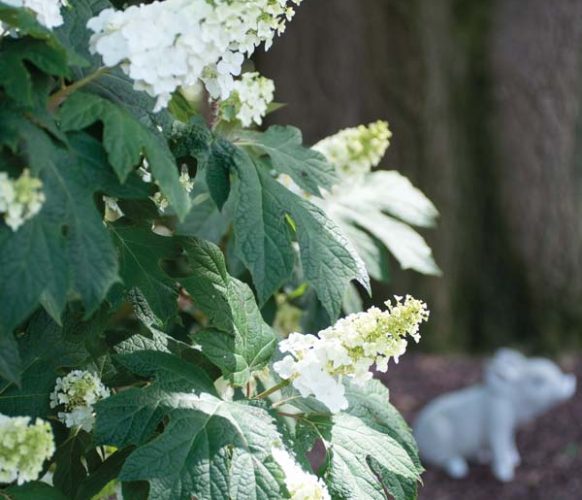 Since Bill’s death in 2009, Pat has “remodeled” the backyard somewhat. The large vegetable garden has been downsized. “I cut it in half,” she says of the resulting plot that is used to grow onions, leeks, spinach, lettuce, beets, tomatoes, potatoes and zucchini. She supplements what she grows with beans, soybeans and corn that she purchases for preserving and freezing purposes.

The rest of the garden was subdivided and is now home to perennial beds and a water garden that Tom Jones designed and installed. “I just love the sound of water,” Pat says.

Pat was tempted to disassemble the tree hut, but Tom persuaded her to let it stand as a tribute to Bill. Since the grandchildren are grown and no longer use it, Pat has repurposed it and now utilizes it as a storage shed.

Animals also figure into the scenery. Years ago, Bill presented Pat with a goat for  Christmas. “I always said that a goat was the only animal that we didn’t have on the farm and that I always wanted one,” she relates. “So, thanks to Bill, I got my goat!” Dogs and cats have come and gone. Sheep and pigs – of the faux variety – serve as garden art. 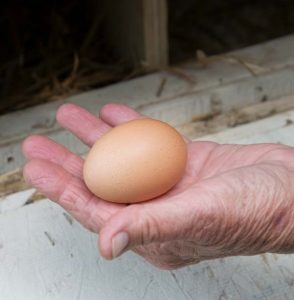 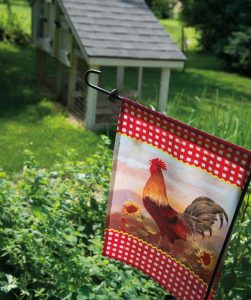 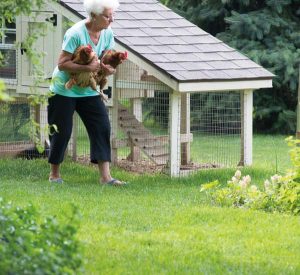 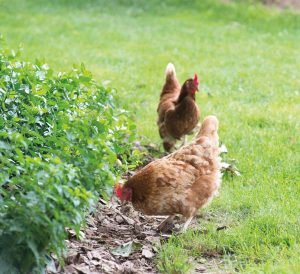 Pat always wanted some chickens, and a friend helped her to obtain Henny and Penny, who have free range of the backyard during the day and spend nights in their custom-built chicken coop. Pat is rewarded with eggs that she uses and gives away.
Two years ago, Henny and Penny joined the menagerie. “I’ve always wanted some chickens,” Pat explains. A friend helped her obtain her two Rhode Island reds. “They know their names,” she says. “And, they know the sound of my voice.” When they don’t have free range of the backyard, Henny and Penny spend their time in a custom-built chicken coop. Pat provides the duo with a daily dose of TLC. “I give them hot oatmeal every morning,” she explains. “I got the recipe from an Amish friend.” She also treats them to fruit and salad.

They in turn have provided Pat with plenty of eggs. “I eat a lot of eggs, and I give a lot away,” she reports. Last fall, when production all but ceased, one of her grandchildren suggested that perhaps it was time to enjoy them for Sunday dinner. “I said, ‘Absolutely not!’ There’s no way that’s going to happen.” Fortunately, egg production has resumed.

The side yard is dedicated to birds of another feather. A pathway winds past the sunroom and through the tree-filled area. The birds – cardinals, blue jays and sparrows among others – provide non-stop entertainment. “I feed the birds year-round,” Pat explains, adding that in the aftermath of the March snowstorm, she was refilling feeding stations several times a day. “I feed the squirrels, too,” she admits, noting that 16 regularly visit. “I know them all,” she says, referring to the nuances that distinguish one from another.

As for the feathered visitors, she excitedly shares that bluebirds have made an appearance for the first time since she has lived there. Now, she is angling to catch the attention of Baltimore orioles with a special feeder that can hold two of their favorite treats: oranges and jam. “I’m determined!” she says.

Pat is also doing her part to provide nectar for the birds and bees. Colorful plants abound. As soon as spring arrives, she journeys to Ken’s Gardens for pansies. As the weather warms, she fills her beds and pots with flowering plants from nearby Amish-owned greenhouses and River Road Produce & Garden Center. “I go all over the place for different things,” she says of her plenty-buying strategy. Succulents are a new fascination.

While Pat mows her own lawn, she has come to rely on Tom Jones to do other chores such as prepping her beds and doing general cleanup. That allows Pat to concentrate on her other passion: volunteering. She dedicates her time to Meals on Wheels, the Salvation Army (she’s the representative for East Donegal and Conoy townships), the East Donegal/Conoy Area Christian Food Bank (she’s the president), Maytown Historical Society (a former president, she is now a member of the Archives Committee), and St. John’s Lutheran Church (she’s a member of Church Council and teaches Sunday School).

Pat surmises that her interests in growing things and taking care of people and animals can be attributed to “the farmer in me.” 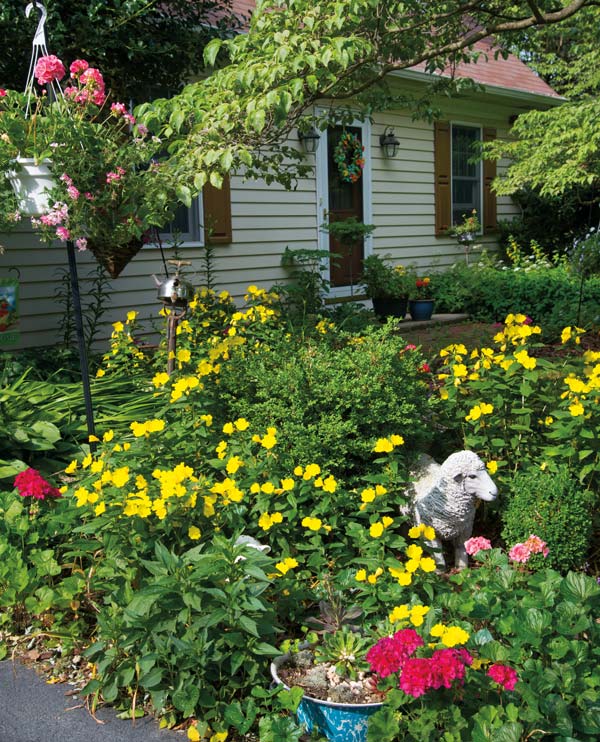 Bill designed the house that sits on a 1-acre lot that was once a tobacco field on the farm where Pat grew up.