A holiday that is fast becoming the domain of adults, DIY ingenuity and a band that included the father of the bride, helped to make this wedding one that guests are still talking about. 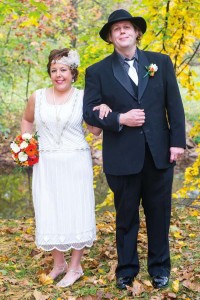 Heidi and Matt both grew up in the Mountville area. “We lived a mile apart,” she notes. But, their two-and-a-half year age difference prompted them to move in different social circles. Sometimes, however, their social circles would intersect or Matt would come to the Derstlers’ house with mutual friends. “I guess you could call us passing acquaintances,” she says. After graduating from high school, the two went their separate ways. Then, late in 2011, they reconnected through Facebook. A lunch date followed. They became inseparable. He proposed in April 2014.

As they were in the process of buying a house that would require a great deal of restoration work, they wanted a simple wedding. “If it was up to Matt, we would have had a pig roast in a park,” Heidi says. Wanting to take it up a notch, Heidi, who agreed with him on the outdoor aspect of a wedding, began exploring her options. Through The Knot, she discovered the Eicher Arts Center in Ephrata. Its rustic interiors and outdoor spaces were perfect. She also liked the fact that proceeds from weddings and other events help to support the Native American Museum Shop that adjoins the center. 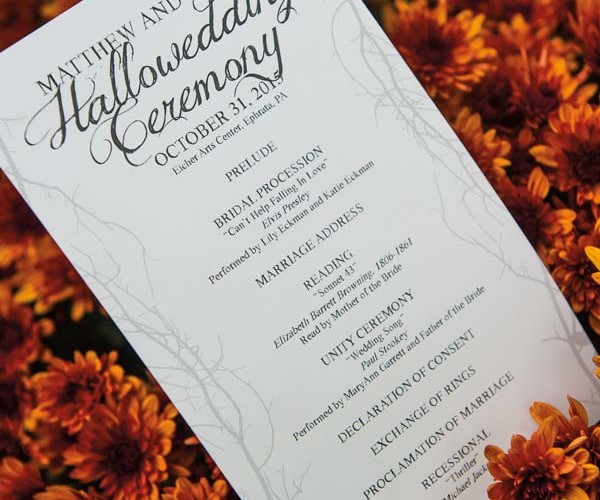 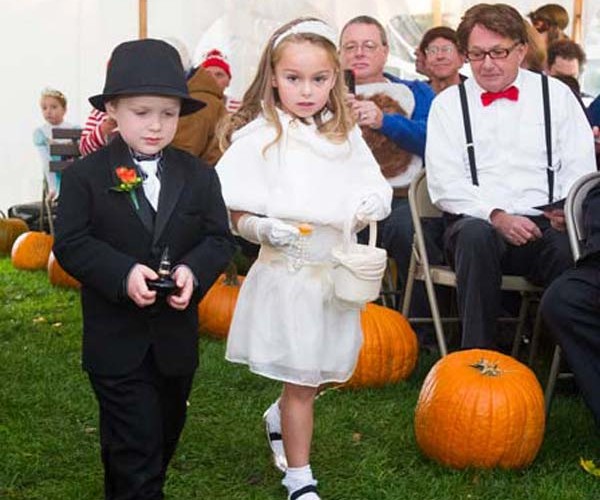 Matt created the glass ringer holder that Jackson carried down the aisle. 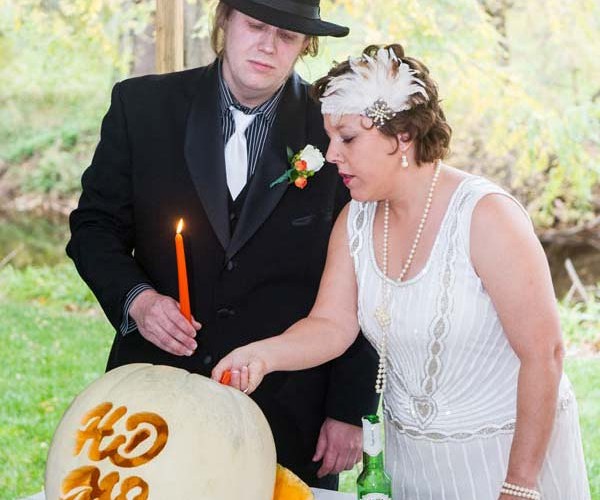 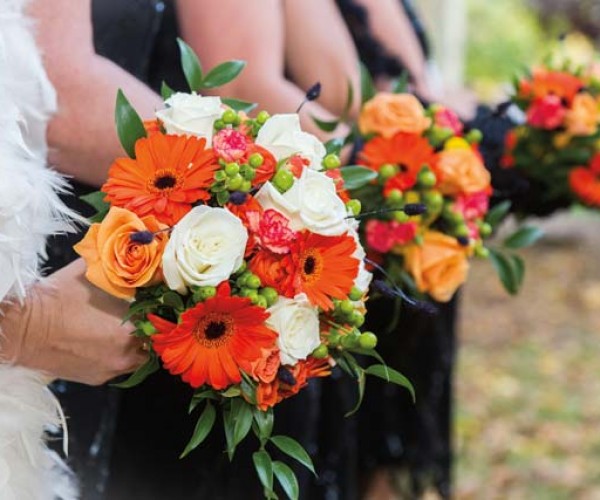 The bouquets, designed by Heather Meaney, echoed the color scheme. 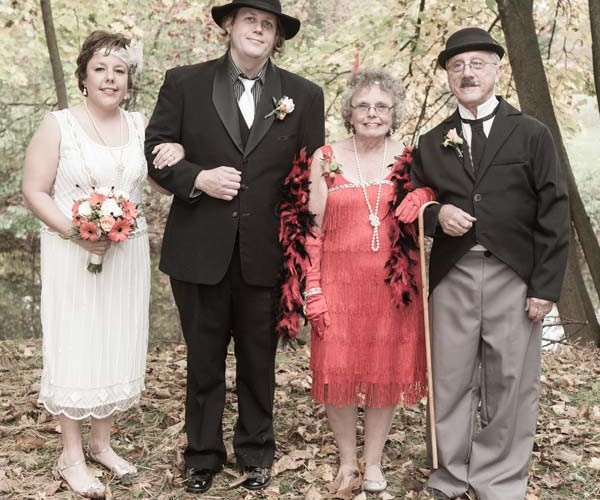 Heidi and Matt with her parents, Pat and Leo Derstler. 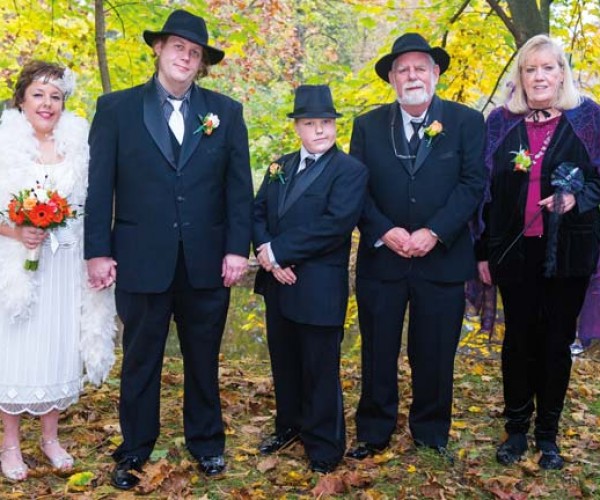 Heidi and Matt with his son, Jackson, and his parents, Bill and Cheryl Eckman. 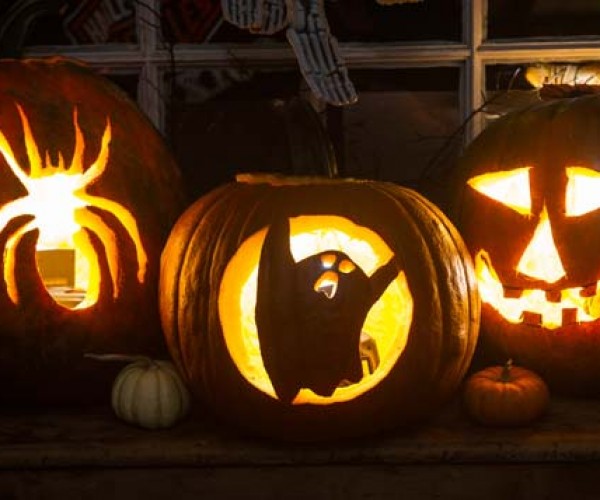 Reception decorations were created at pre-wedding pumpkin-carving parties. Guests were invited to take the décor – pumpkins, gourds, potted mums – home with them. 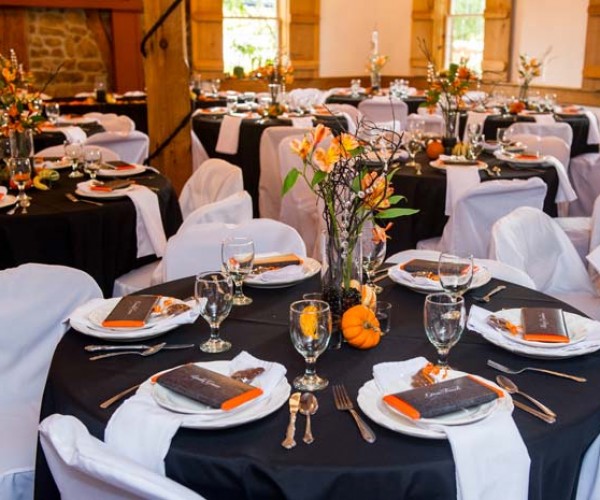 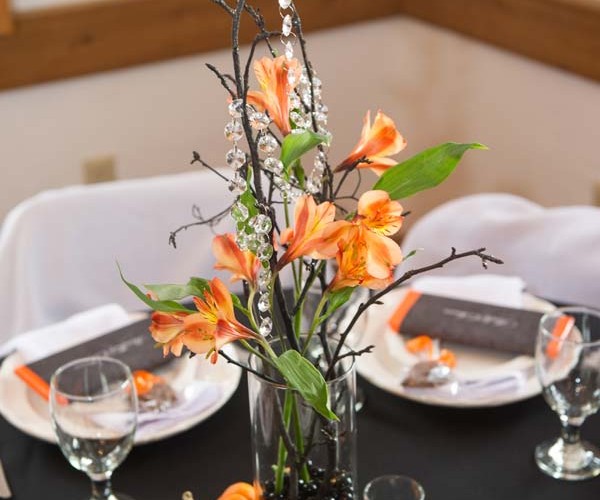 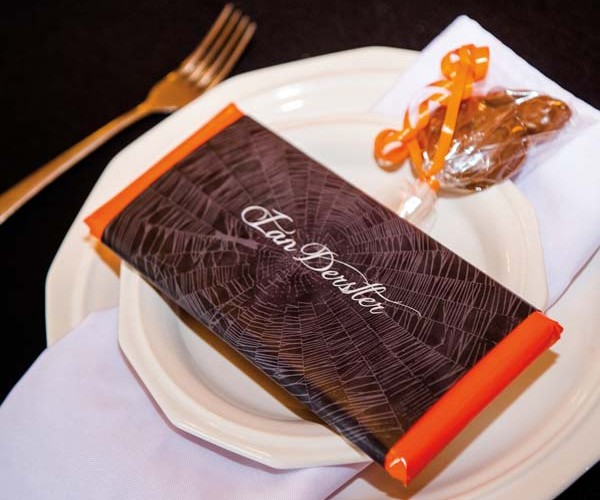 Heidi designed the wrapper for the candy bars. 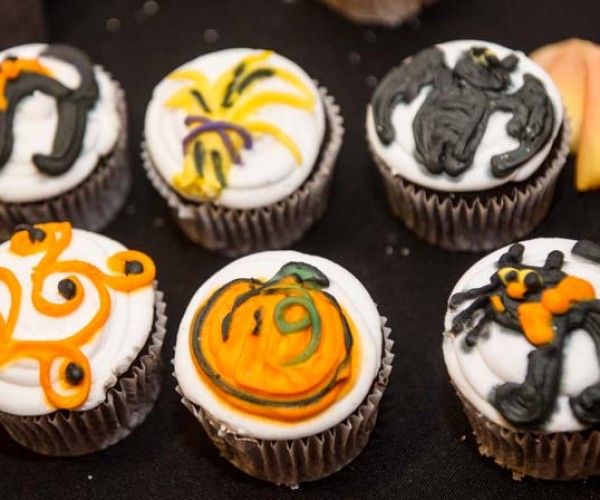 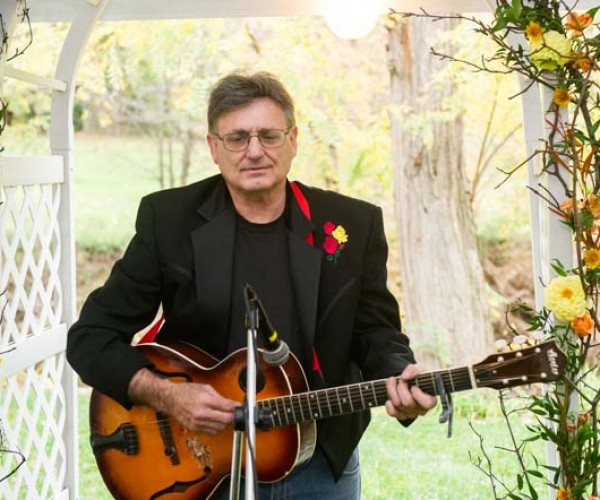 Stu Huggens stepped in to provide the pre-ceremony music when the CD player failed to operate. 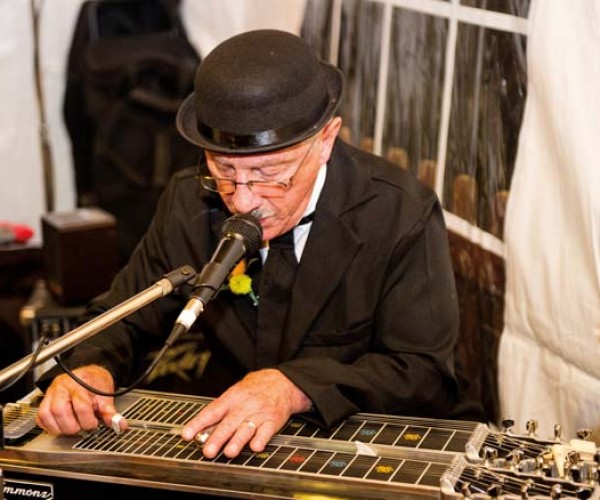 It’s not often that the father of the bride is a member of the band that provides entertainment. Leo Derstler has been a member of Stu Huggens’ various bands for years. 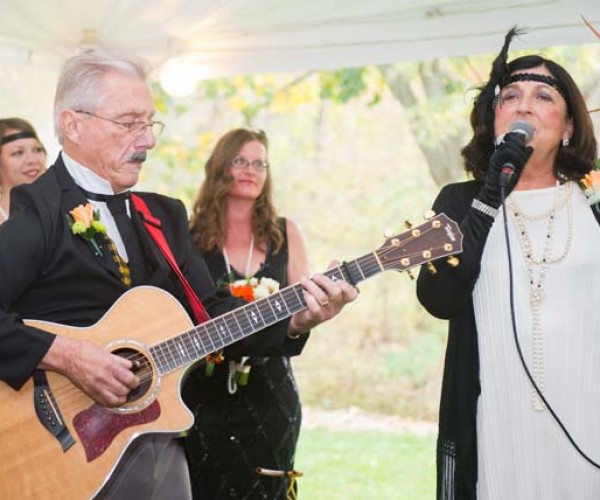 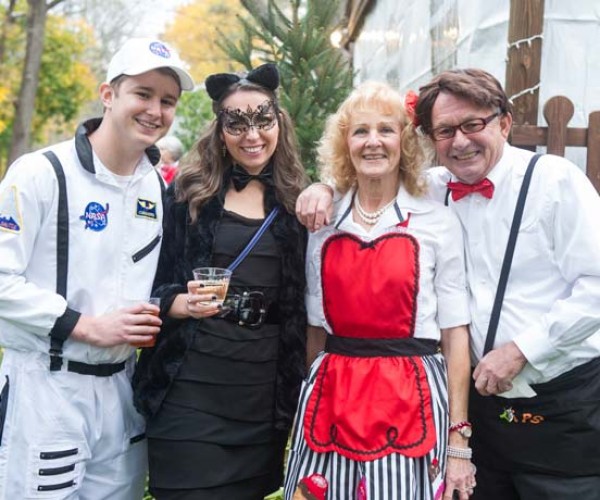 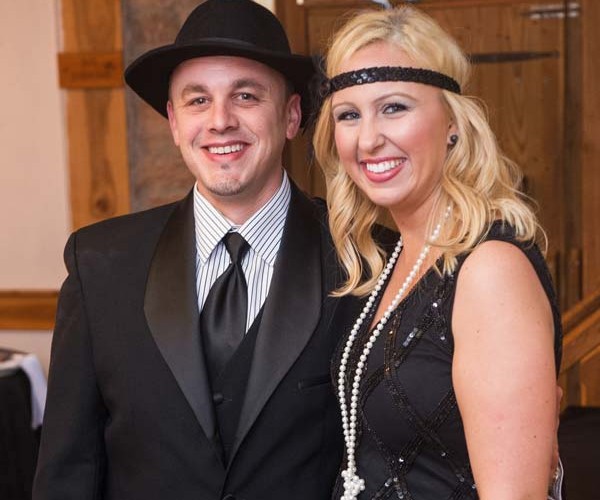 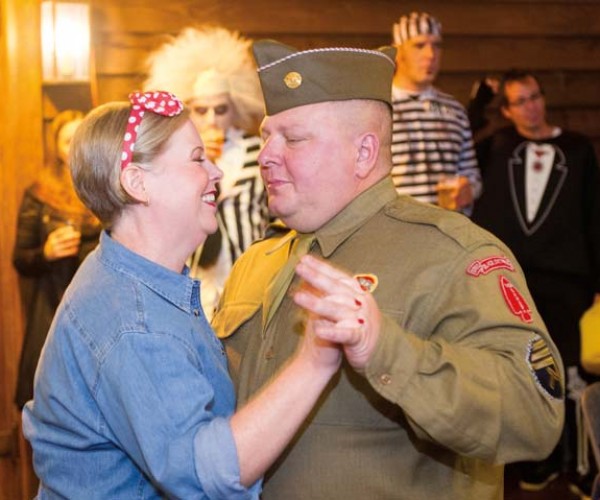 Guests danced the night away. 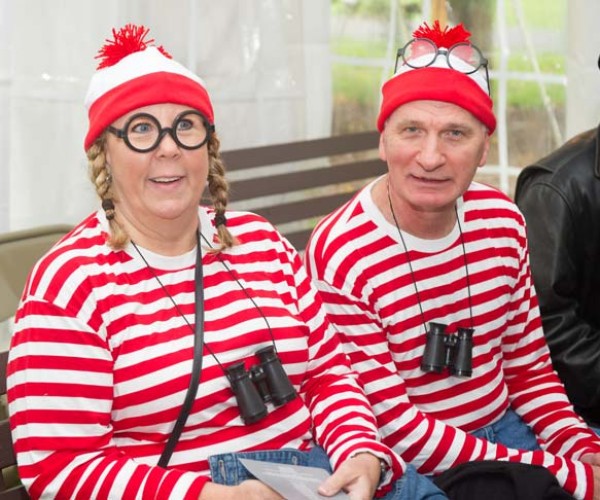 The property is brimming with history. Its story dates to 1724, when Johann Conrad Beissel, the founder of the Ephrata Cloister, baptized members of Daniel Eicher’s family. In 1733, two of Eicher’s daughters became “sisters” of the Cloister and took up residence in a cabin he built for them along the Cocalico Creek. A year later, their father acquired a 100-acre patent for land and built the family homestead adjacent to the cabin. The buildings eventually fell into disrepair, and by 1983 they were slated for demolition. A group of concerned citizens took up the cause to save the Eicher buildings, with restoration successfully completed in 1985. 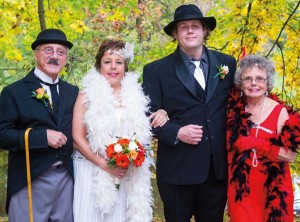 Heidi and Matt pose with her parents, Leo and Pat Derstler.

At the time Heidi visited in late 2014, only three Saturdays were available for 2015: two in August and October 31. “Fall is my favorite time of the year, so I chose October 31,” she explains. The more she thought about it, the more October 31 appealed to her. “I said to Matt, ‘It’s Halloween! Let’s go with it, embrace it and have fun.’” However, at the mention of costumes, he became leery. “I had to sell him on my ideas,” Heidi admits. But, as long as he didn’t have to do anything ridiculous and Heidi promised not to become a Bridezilla, he was game. 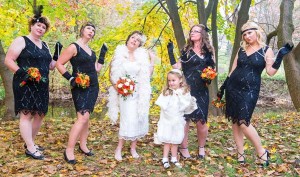 Heidi poses with her Flapper-inspired attendants.

On the other hand, Heidi’s mother, Pat Derstler, was unfazed. “Heidi is Heidi,” Pat says. “Nothing she does surprises me.” She and her husband, Leo, agreed to go along with their daughter’s vision.

Excited to get started, Heidi conducted a great deal of online research about how others planned and executed Halloween weddings that were both beautiful and boo-tiful (a word that was used in the couple’s LNP announcement). Orange became the theme color for the floral, decorative and cake aspects of the wedding. Black also figured in from a fashion perspective, as well as for the table linens and the cake.

Wanting the wedding party to look cohesive, Heidi settled on a Great Gatsby theme. For her dress and those for the attendants, she turned to Etsy.com, where she discovered Gatsbylady. Based in London, Gatsbylady has been working in overdrive for the past three years, providing “vintage-inspired, hand-embellished Flapper dresses” – worldwide – for everything from Downton Abbey-inspired weddings to Halloween and Roaring ‘20s-style costume parties. Heidi wore a shimmering white dress, while her attendants donned sparkling black designs. Matt and his groomsmen had an easier time of it. Gatsby-inspired tuxedos just happen to be in vogue and are readily available at local rental shops. 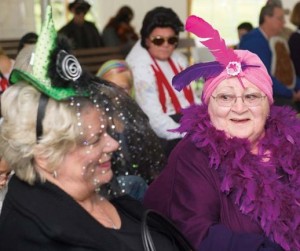 Guests got creative with their costumes and, yes, Elvis (actually there were two) was in the house.

Heidi also wanted her guests to get into the “spirit” of the wedding. The invitation specified, “costumes encouraged.” To honor her request, all 115 guests arrived in costumes. Pat initially decided to come as the Wicked Witch from The Wizard of Oz. “A witch of a mother-in law!” she laughs. Unfortunately, the costume arrived on October 24 and was too small. “So, I ran to the costume shop at Park City and got a red Flapper dress and all the accessories for $30!” she says. Fortunately, Leo’s Charlie Chaplin costume fit just fine.

Even former District Judge Daniel Garrett, who conducted the ceremony, went with the flow and wore a rather dignified costume.

The internet also provided Heidi and Matt with ideas relating to their ceremony. They liked the idea of a unity ceremony but couldn’t agree on which one; therefore, they performed two. The first was a takeoff on the wine ceremony in which red and white wines are combined to create rosé. “We love beer, so we substituted beer for the wine,” Heidi explains. And, they added a Halloween aspect to the unity candle ceremony by lighting a monogrammed pumpkin.

Whenever Heidi hit a roadblock, she would post her questions on Facebook and wedding-related blogs. “Ideas and suggestions came flowing my way,” she says. And, through Facebook, Sarah Mohr volunteered her services as the event’s bartender. Longtime friend, Heather Meaney, who is a freelance floral designer, saw Heidi’s posts and offered to design and provide the bouquets, boutonnieres and centerpieces. The same is true of another friend, Jaclyn Sultzbach, who served as the hair/makeup stylist and fashioned Heidi’s headpiece.

Pinterest, of course, was a source for decorating ideas. Fortunately, Heidi and Matt are creative in their own rights. Heidi, who is a graphic designer at Albright College in Reading, designed the invitation suite, the cake and the wrapping on the candy bars that served as party favors. Matt, who is a glassblower, made the cake topper that glowed acid green with the help of a blacklight. He also created the glass ring holder that the ring bearer carried down the aisle. 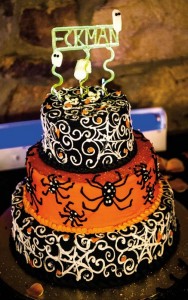 Heidi designed the cake, which was then interpreted by Patty Mitchell of Cake Creators. Matt created the glass cake topper.

Friends and family also joined forces to help the couple. At the top of the must-have list was a cake from Cake Creators in Silver Spring. Heidi has been friends with owner Patty Mitchell’s daughter since childhood. Incredibly, it was Matt who suggested the cake flavor of pumpkin spice. It was’t in Patty’s repertoire, but she agreed to devise a recipe. Patty then replicated the designs Heidi provided for the orange-and-black cake. A variety of cupcakes was also available.

Matt’s sister-in-law, Jessica Eckman, directed the couple to Nancy Nissly, who operates Nanalyn’s Full-Filling Feasts. Thanks to Nancy, Matt got his pig roast.

The couple’s families also bonded during DIY parties in which they wrapped the candy bar favors and carved pumpkins. More than 100 pumpkins and gourds were purchased from area farms; 20 were carved, while the rest were used for decorative purposes. Guests were welcome to take them home at the end of the evening.

And, then there was Stu Huggens. He and his band, which Leo has been a member of for years, were slated to provide the reception’s dance music. But, when the CD player failed to cooperate before the ceremony, Stu jumped in and provided the background music as guests arrived and found their seats. However, he drew the line at performing Michael Jackson’s Thriller, which was slated to be Heidi and Matt’s recessional music!

Looking back – and ahead – Heidi says she doesn’t have any regrets about her wedding’s style and theme. “We just wanted everyone to have a good time, and I think we accomplished that,” she remarks. Pat verifies that sentiment. Just before Halloween 2016, she ran into a wedding guest who apparently had a wonderful time at the wedding. “He asked if Heidi and Matt could get married again,” she reports. 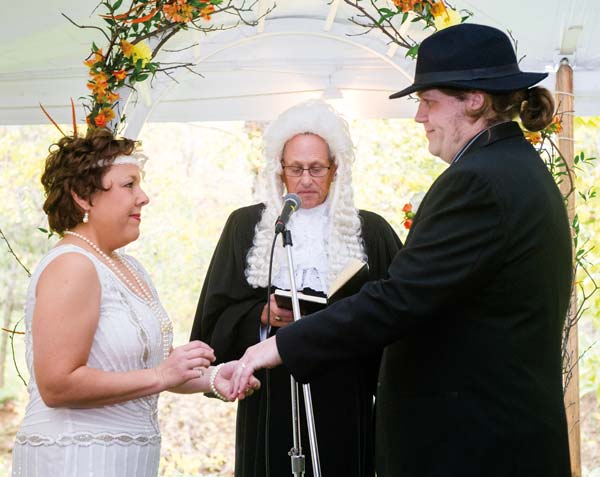 Even the officiant, former District Judge Daniel Garrett, got into the spirit of “costumes ncouraged.”