As a child, scampering through the Peppermint Forest, climbing the Gumdrop Mountains and ending up mired in the Molasses Swamp ...Read More

Building Christmas Fantasies
When December approaches, hundreds of railroads – in almost every state in the country – dust off the cobwebs, blow ...Read More

Keep on Rollin’
At this time of year, when I hear of 6-year-olds telling Santa they’d like to find T-rex action figures under ...Read More

Early in the morning, an unfamiliar chill and damp air roll in. The leaves are tinged with color, announcing autumn’s brilliant arrival. Nestling up to a hot breakfast, a bite of buttery apple pancakes, warm from within, puts the chill at bay with notes of cinnamon and maple syrup. In the background, the sleepy sputter of a two-stroke 1947 McCormick Deering Farmall H tractor awakens with a crank as a hayride is queued at the Hay Creek Apple Festival. For those who love apples, the Hay Creek Apple Festival at Joanna Furnace offers everything from an apple dessert contest to a wide selection of delicious apple-based food and drink. Held annually in Geigertown, Berks County, since 1980, the event serves as a fundraiser for the Hay Creek Valley Historical Association, whose mission is to support and demonstrate “interest in and appreciation for” local heritage.

The association, which was founded in October 1975, maintains the historic Joanna Furnace, which dates to 1791 and operated as a cold blast, single stack, charcoal iron furnace until 1898. It acquired the furnace from Bethlehem Mines in 1979. It’s now the site of events such as the Hay Creek Festival (September 7-9), the apple festival and a holiday gathering. Celebrating local culture extends to apples, which are regarded as one of the earliest-known crops to be grown in the New World. In fact, many of those who traveled across the Atlantic – beginning with the Mayflower – had saplings among their possessions.

That was especially true of those immigrating from the British Isles – they brought saplings along so that they could grow orchards. After all, hard cider was their thirst quencher of choice, along with beer, ale and fruit brandy. The tradition continued on this side of the Atlantic, as many people distrusted the water quality. In New England, the average citizen consumed 15-54 gallons of hard cider on an annual basis. Then there’s the legend of Johnny Appleseed, who made it his job to plant apple trees across the frontier so that settlers could begin making cider once they secured land.

Interestingly, hard cider even played a role in politics. During the presidential campaign of 1840, William Henry Harrison embraced his reputation as the “log cabin and hard cider” candidate. He won the election, but one month after his inauguration, Harrison died of pneumonia.

In the early 1800s, the Temperance Movement began to sweep the nation. Its supporters argued that alcohol consumption was a detriment to one’s health, work environment and family life. Support for the movement led to Prohibition (1920-1933), during which over-zealous supporters and even FBI agents made it their mission to destroy apple orchards. Unfortunately, in destroying the orchards, America lost many of its varieties of heirloom apples.

In the aftermath of Prohibition, the demand for hard cider waned, prompting farmers to begin growing apples suitable for eating and cooking. Apple juice, which was touted for its health benefits, took its place at the breakfast table. It also became a favorite with young children. Eventually, cider made a comeback – as a sweet, unfermented, nonalcoholic drink that has become a fall tradition. Hard cider is also enjoying a revival. Breweries, wineries and cideries are creating modern brews that have helped to make cider the fastest-growing segment of the alcohol industry over the last 10 years.

One of the highlights of the festival – and my personal favorite imbibement – is the freshly pressed apple cider that’s made on-site and is sold by the cup, cold or hot, and by the half-gallon. Manufactured in Massachusetts in 1908, the apple press is used just five days a year: three days at the Hay Creek Festival every September and two days at the apple festival held every October. The powerplant is a 1949 Allis Chalmers WD, a 24 horsepower, four-cylinder gas-powered tractor. To mash the apples, the motor runs at just over half speed, depending on how fast the apples are dumped into the hopper. After mashing, the apples are pressed between wood tightened with large threaded rods. The tractor motor is cut back to quarter speed with the occasional pause to let the cider work its way out under pressure. A sticky-sweet mist fills the air during pressing, and if only for a few days, the operation breathes life and relevance into the century-old process. The mash is pressed, creating the cider, and the dry pulp is used as animal feed. The complete cycle takes roughly an hour for two layers of apples to be simultaneously pressed.

Working at the press, Barry Kubovcsak says he has been helping to make apple cider at Hay Creek for roughly 15 years. Working with him, Steve Martin has been helping for close to 20 years. “He’s the cider master, but he stands around more,” says Barry with a sly smile on his face. Pointing to the cider house, he reports, “Both of our wives are down there selling it.” With record precipitation levels in 2018, last season’s apples were “wet, yielding 30-35 gallons from seven bushels, which takes 15 minutes to mash.” According to Steve, six bushels of apples typically yield approximately 25 gallons of apple cider. “Cider made in September has a different yield than in later months as there is less variety of apples to choose from,” he notes.

The festival also celebrates apple-based food. Schnitz Un Knepp is one of the more intriguing dishes available at the festival. If the name doesn’t give it away, this dish is Pennsylvania Dutch to its core and, at a glance, may seem to be a dessert. Stewed, dried apples comprise the schnitz, while ham and dumplings make the knepp. Akin to a pork and sauerkraut meal on New Year’s Day, this treat was traditionally reserved for a Sunday or Christmas dinner. According to those who prepare the dish for the festival, apples were once coveted over long winters, and serving them with ham was a long-held Christmas tradition. Combining the two yields a hearty, sweet-and-savory dish that sticks to your ribs. A bone-in ham (or the alternative, pork shoulder) adds richness to the flavor.

Never realizing how much variety and planning go into cider and knowing the source of the apples, I ventured over to the tent occupied by Weaver’s Orchard. With a bit of a windfall fortune, I met Chris Collichio, who manages the Morgantown orchard. He invited me to stop by for a visit. Eager to get to the source, I visited Weaver’s just a few days later. Here, they grow apples (and offer a pick-your-own option if you want the full experience) and a host of other fruit. According to Ed Weaver, president of Weaver’s Orchard, early apples appear in the middle of August, but the season “really kicks in with honey crisp and gala in September.” Ed’s great-grandparents started Weaver’s in 1932, and today many members of the family help to run the orchard and farm market.

Even at Weaver’s, while consistency is the goal, every batch of cider varies slightly in composition across batches as the choice apples that are used change. Their apple cider, which is sanitized using an ultraviolet light system, is never heated and is not a shelf staple, so it must stay cold. Ed explains they are “vigilant about getting apples in coolers” to maximize quality. Walking into their large refrigerated storehouse, the fresh apple scent is immediate and genuinely overwhelming. Breathing in the cool, flavorful air filled my senses with the most delightful bouquet imaginable. Here, varieties remain perfectly preserved, free of a wax coating. In particular, the dense pink lady variety will retain its qualities all winter long. For more information, visit weaversorchard.com.

Late in the afternoon, Chris took me on a spectacular tour, driving in and out of beautiful groves of fruit-bearing trees in a golf cart. The 35-acre orchard, home to 18,000 trees and more than 30 varieties of apples alone, rely on honey bees to pollinate their flowering fruit trees. Honey that is produced at Weaver’s is sold by Stockin’s Apiaries, which is based in Strasburg. (Just like apple saplings, bees made their way across the Atlantic – the first recorded shipment of honeybees for pollination purposes dates to 1622; their destination was Virginia.) As we zig-zag beneath the trees, tall fences minimize the presence of apple-loving deer. Still, a doe who has managed to forge the barriers, jumps out of our way. The Spotted Lantern Fly is a growing threat to the health of the orchard. With each passing tree, it becomes materially evident how connected our environment is to our food supply. At the close of the day, driving down Fruit Lane, I headed for home with freshly made apple cider and apple-cider donuts in tow. As expected, not all of the donuts made it back to Ephrata, giving the evening drive a boost of sweetness. Rolling the windows down and cranking the heater up, warm air mixed with cool as summer faded into autumn. Welcome back, old friend. Welcome back. Apples, pumpkins and fun are on the agenda at Weaver’s Orchard. Weaversorchard.com. 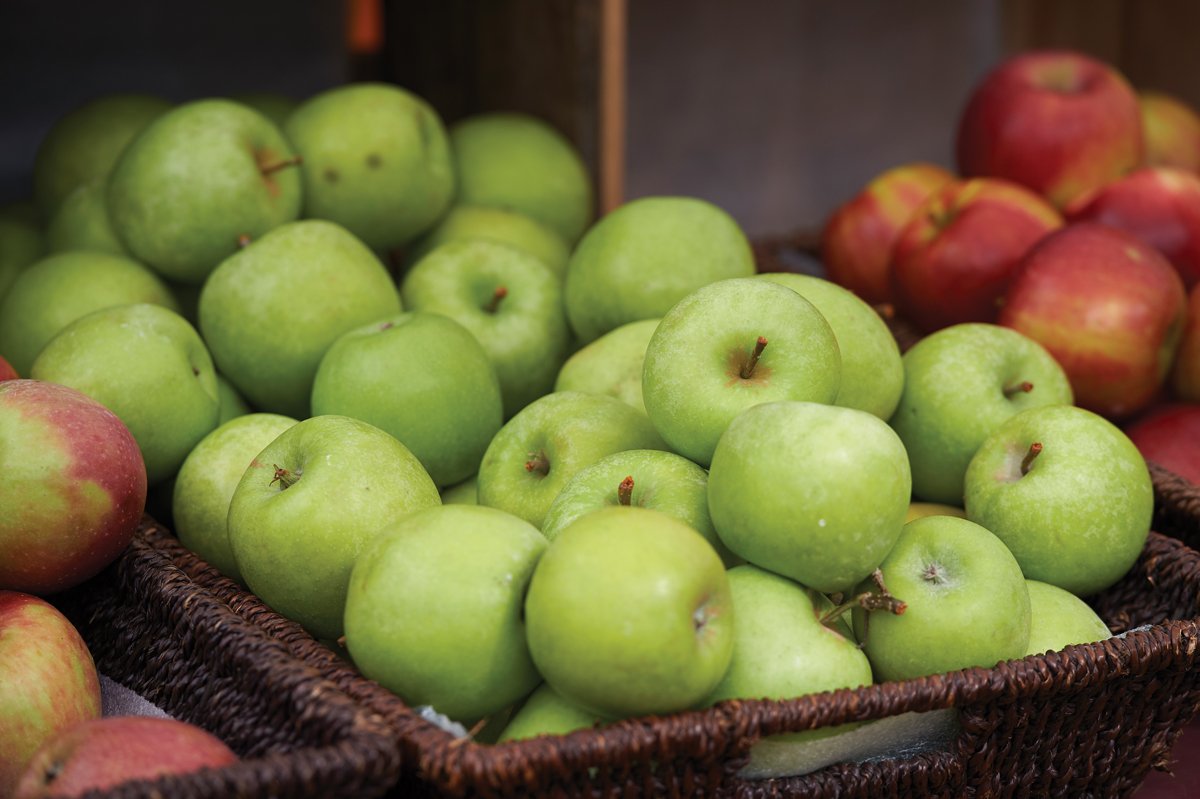