On April 1, 1986, Randy Wolgemuth went on his first and last blind date. Sounding like the start of a bad joke, Randy met Betsy in a jewelry store on April Fool’s Day during the big hair and bad fashion days of the mid-80s.

“My first thought was he’s cute, but that leather jacket’s got to go,” Betsy laughs. “Literally, that’s the very first thought that came to my mind when I saw him.”
“… And, I remember thinking she’s cute, but she dresses like an old lady,” Randy quips, “because things were so conservative and traditional then.”

Thankfully, first impressions didn’t scare either of them away from one another. What began as a blind date blossomed into love, marriage, kids and a family-owned business that is a landmark of Lancaster County.

Randy, a born and raised Lancastrian (Mount Joy, to be exact), managed a café in the Peabody Hotel in Memphis during the 80s. Betsy, who grew up in Memphis, worked at a small jewelry chain. The couple dated for about a year when Randy started to grow tired of the restaurant business and wanted to move back home after being away for four years.

“The Kreider family had some restaurants,” Betsy says, “and while he was home for Thanksgiving, they asked him to come and manage their restaurant in Manheim. So he moved back.”

At that point, the couple decided to go their separate ways. Fortunately, as fate would have it, the two reunited and were engaged within a few months of the breakup.
“Memphis in May is a month-long celebration, and at the very end there is something called the Sunset Symphony,” Betsy exclaims. Randy just so happened to be visiting that particular weekend. After having dinner with Betsy’s family, Randy took Betsy for a carriage ride in downtown. 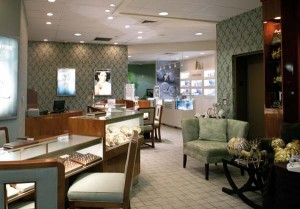 Randy and Betsy Wolgemuth, owners of Koser Jewelers, enjoy helping couples find that perfect engagement ring. During the month of February, the jewelry store tends to have special designs around Valentine’s Day and sells “lots” of Hearts on Fire (one of the store’s top diamond brands) rings, according to Randy.

As the carriage was approaching a fountain, the driver asked the couple, “‘Do you two want to make a wish?’ And he handed us two pennies to throw in the fountain, and then I said, ‘I wish you would marry me,’” Randy says sheepishly.

While dating long distance – a very long distance of approximately 950 miles – a friend of the couple had persuaded Randy to purchase Koser Jewelers. (The Kosers had established the business in 1952.)

“It was a small store. The store was in the front, and the Kosers lived in the back,” Betsy remembers.

“It was nice,” Randy interrupts. “We had five bedrooms upstairs, a living room and a dining room, and a kitchen downstairs, plus the store.”

Betsy chimes in, “And, there was a little buzzer on the front door. All four of our kids were born while we lived there.”

“It was a short commute to work,” Randy jokes.

The couple’s four children—Drew, Tierney, Colin and Jillian—helped a lot with the business while growing up. Both Randy and Betsy agree that owning a business made a vast imprint on the lives of their children.

Living in the back of their “old” store, Randy remembers being able to “play with the kids and then, when I would hear the door ding, I’d run out front and pretend that I was just in the back room doing something,” he says with a smile.

Koser Jewelers moved from its previous location at 64 East Main Street, Mount Joy, to its new location at 811 East Main Street in 2008, thereby gaining more than 5,000 square feet of space and ample parking (which were major reasons for the store’s relocation).

Drew, who is the couple’s oldest son at 23, recently graduated from West Point. Tierney, 21, plans on starting medical school, while Colin, 20, is a student at Millersville. And Jillian, 17, is a senior at Manheim Central who will attend Duke University on a field hockey scholarship.

“Growing up in a family business had a huge impact on our kids in a number of ways. First of all, they see how hard we work, and I think it’s caused them to be extremely hardworking kids,” Betsy says. “Also, with us living behind the store, they were never awkward with strangers because there were always salesmen, customers and employees, and they were around people all the time. … Our kids make us look good every day, and they’ve been very successful at what they’ve done.”

With any occupation, individuals tend to bring their work home from time to time, whether that means actually working from home to meet deadlines or transferring their thoughts and emotions from a tough day on the job to their spouse, children, pets, etc. Randy and Betsy both agree that with owning and operating a family business, “you do tend to take it home more.”

The couple says there are positives and negatives to owning a business and working with your spouse around the clock.
“For us one of the positives is that we have very different gifts. Randy is ultra-organized,” Betsy says. “He is great with any kind of system, and I’m really creative. So, we bring different things to the table.” 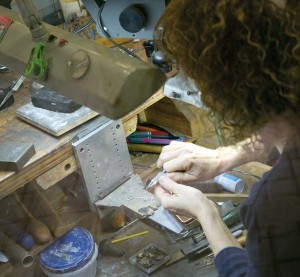 Koser Jewelers head goldsmith Beth de Vitry hand fabricates a custom necklace that was being presented as a gift.

One of the negatives, says the couple who celebrated 27 years of marriage in January, is carrying over the emotions from home to the work place or vice versa.
“It can be stressful on occasion when you disagree,” says Randy, “when you’re working together and you’re together 24/7.”

They say they try not to be disgruntled in front of employees or their children but fail at times. So, how do they control their composure and keep calm during emotional tugs-of-war? By a few easy lessons they’ve learned along the way.

Fortunately, the pair had several prime examples of husband-and-wife teams who owned and operated their own establishments and were able to look to them as key figures.
“We had a lot of examples of friends and parents who operated businesses together as husband and wife, like my parents who were farmers and worked together,” Randy says. “When I worked for the Kreiders, Mr. Kreider and his wife worked together.”

another essential staple toward a healthy working relationship the couple says is giving each other space. While Randy and Betsy both enjoy some of the same interests – such as great food, cooking, playing tennis and being involved in various organizations – they both know the importance of having their own personal time. However, it is also important to have quality alone time together.

“Obviously, there are times when you’re upset or mad, so what we try to do is give each other space,” Betsy says. “… But, twice in the last few weeks we’ve gone out to dinner just the two of us, which we don’t get to do a ton. And it’s funny because we’ll be in the car, and one of us will bring up something about business or the kids or whatever, and the other will say ‘no, we’re not going to talk about that,’ because when you own your own business you’re never finished.”

They agree the positives definitely outweigh the negatives when it comes to working together as a married couple and that the best way to deal with stress is to communicate, give space when needed, take time for each other and love one another.

“It’s fun growing something together and working together as a family,” Betsy says. “… It has been fun seeing how our different gifts complement each other.”
“Take the time to occasionally go out, just the two of you, and try not to talk about business,” Randy adds.

Betsy quotes one of Randy’s well-known phrases saying “Love is more of an action than a feeling.” To which Randy replies, “But, it’s easier said than done sometimes.”
Randy notes that Koser Jewelers is more than just a jewelry store, it’s a family business where “we work it as owners, and we’re there on the sales floor with you in the store. We genuinely care about every single person that comes through the door. … We’re in the business of love and creating lifetime memories.” 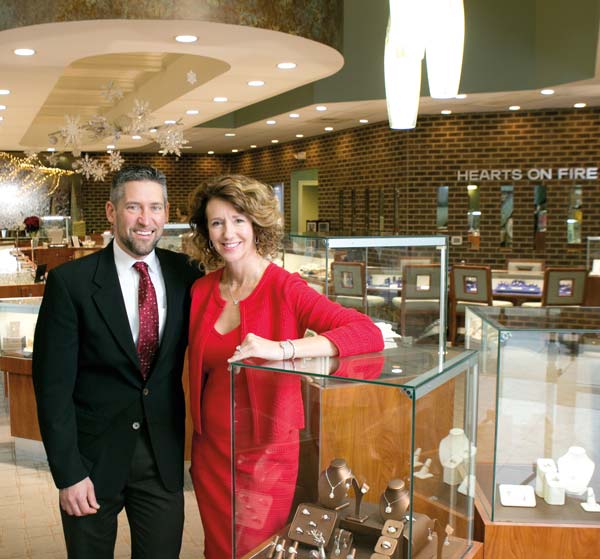