Sheri Smoker is continuing a tradition that dates back hundreds of years. She is living “over the store,” which in her case is Room with a View, the interior design business she launched 22 years ago in Mount Joy.

Sheri, who grew up in Mount Joy, credits the women in her life for inspiring the career path she has taken. “One of my grandmothers worked at  a sewing factory in town,” she explains. “She brought all sorts of goodies home with her that we were allowed to play with,” Sheri continues, referring to the buttons, beads, fringe and fabric scraps that always intrigued her. Sheri’s other grandmother was a talented homemaker, plus she oversaw the kitchen at a local nursing home. Finally, the title of “creative role model” goes to Sheri’s mother.

However, despite inheriting the “creative gene,” Sheri took a detour after graduating from Donegal High School. “I went to school to be a medical secretary,” she says.

Realizing the error of her ways, Sheri enrolled in the interior design program at Bradley Academy in York, which at the time was affiliated with the Art Institute of Pittsburgh. After graduating, Sheri went on to work for such companies as Ethan Allen, Doneckers and David’s Furniture.

After years of working Saturdays and weeknights, which caused her to miss many of her children’s activities, and to have better control over her time, Sheri opened her own business. “I figured it was time to put everything I had learned and done in my previous jobs and go out on my own,” she explains. In 1995, she opened Room with a View in a small building on the outskirts of Mount Joy.

Success prompted Sheri to contemplate enlarging her business. When a property became available in Mount Joy’s downtown area, she jumped at the opportunity to buy it. “I loved that building,” she says. Dating to the 1800s, it featured high ceilings and finishes that were imported from Germany. She painted the walls a la Tuscany. A window-and-plant-filled sun porch overlooked a garden that was enclosed by a unique iron fence. “I ran my business out of that location for 10 years,” she says.

In 2007, Sheri thought that it might be a good time to downsize. Fortunately, she was able to quickly sell the property to the neighboring business, Higher Grounds Cafe. Sheri then began working out of her home. “That really wasn’t an ideal set up,” she admits. “With this kind of business, clients like to see that you’re committed to the industry. A shop represents that commitment.” She also lost that all-important visual connection with passersby that Main Street provided. 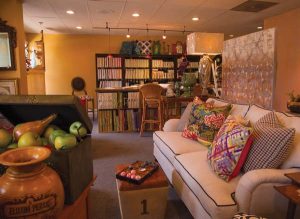 Sheri began working with Randy and Betsy Wolgemuth, whose business, Koser Jewelers, had outgrown its location in Mount Joy. Sheri was helping them with design aspects for their new store that was relocating to the east of town. Like their predecessors, the Kosers, who established the business in 1952, the Wolgemuths and their four children had once lived on the premises.

Now, the building was for sale. The wheels started to spin in Sheri’s head. She could use the former jewelry store as a studio for her business and rent out the remainder of the first floor, as well as the second floor as residential space. She made an offer and once again found herself the owner of a property in Mount Joy’s downtown area.

It then occurred to Sheri that the house could become a home for her and her husband. Her lightbulb moment couldn’t have come at a less-opportune time. “We had just built a house, and my husband was in graduate school,” Sheri reports. Nevertheless, they moved forward with Sheri’s idea. “It was a little stressful,” she admits.

Sheri’s goal was to completely overhaul the house. As it was now strictly a home for adults, Sheri wanted it to function in that manner. After countless design scenarios, she realized she wasn’t dealing with a typical house. Instead, she came to view it more as a 19th century townhouse that  provided the possibilities for incorporating living areas on both floors. That viewpoint allowed Sheri and her husband to take the future into consideration. “We wanted to design the second floor so that it could be self-sustaining,” she explains.

The new plan of action prompted Sheri to open up the first floor and have it function as their living and entertaining area.

Prior to the renovation, the first floor consisted of three separate rooms: the dining room, a kitchen and a living room, which took its place in a two-story addition that had been built in the ‘60s. Sheri removed the wall between the dining room and kitchen and flip-flopped their locations, theorizing it made better sense to enter the kitchen, as opposed to the dining room, from her shop, as well as from the second floor. The windows in the living room were enlarged in order to take advantage of the garden views. 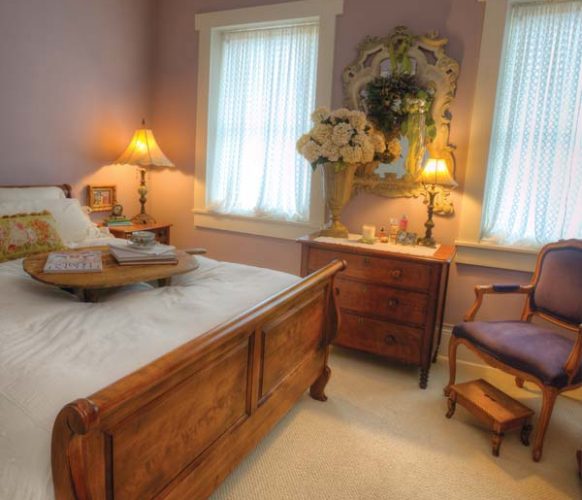 Antiques and an amethyst wall color provide for a comfy guest bedroom. 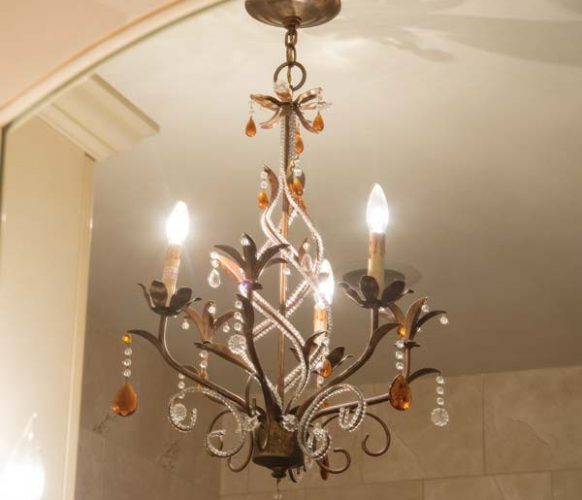 This chandelier has followed Sheri from home to home. It now hangs in the master bathroom. 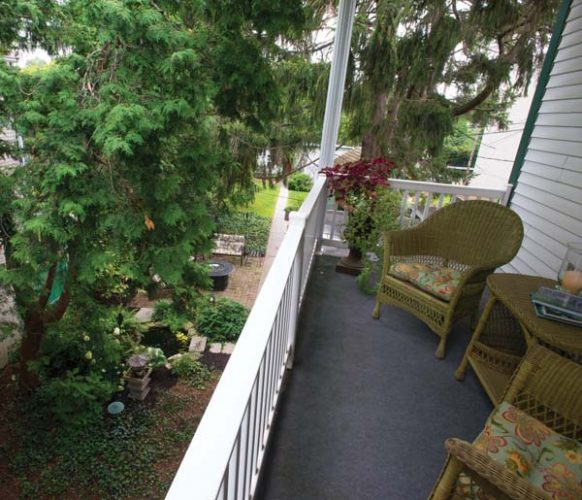 The balcony off the master suite provides a relaxing spot for starting or ending the day. It offers a commanding view of the gardens and backyard. 4. Sheri’s shop and studio fill the space that was once home to Koser Jewelers. 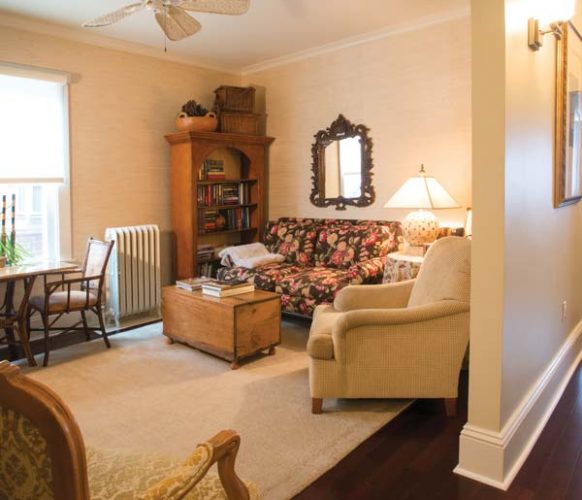 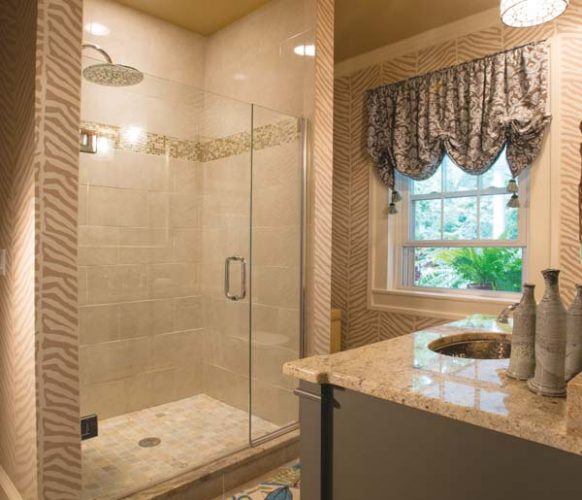 The existing second-floor bathroom was redesigned to accommodate a spa-like shower (it replaced a claw-foot tub) and full laundry. 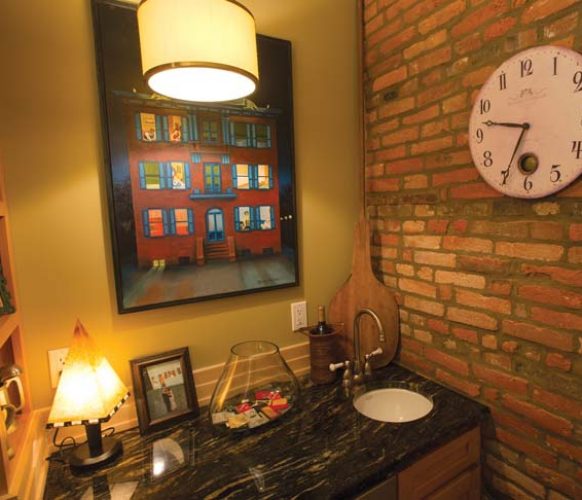 The painting of Bube’s Hotel has sentimental value, as Sheri’s grandmother lived down the street from the Mount Joy landmark. Sheri purchased it at an auction that followed an Art Walk event in town. “The auction provided seed money for a revitalization project,” she explains. The second-floor wet bar was carved from space that was once a closet. 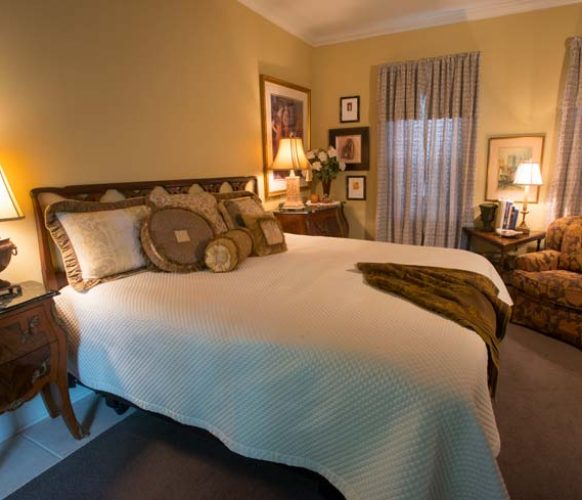 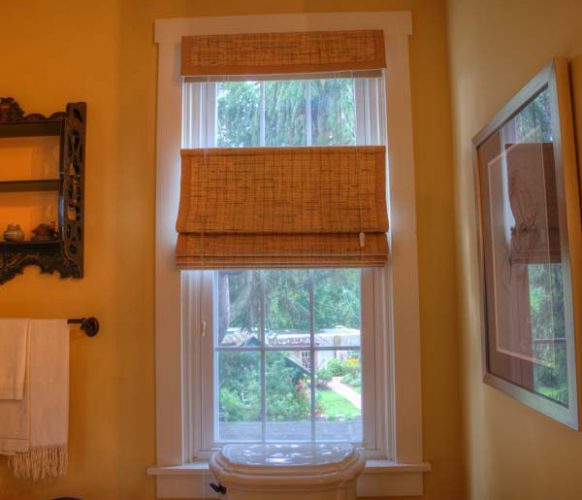 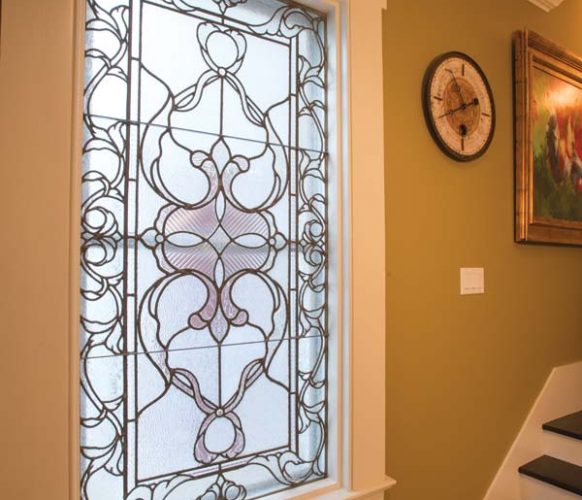 Upstairs, Sheri repurposed three of the five bedrooms. One now functions as a study, while another was transformed into a sitting room. The third is now the master bathroom.

Sheri also reconfigured the existing second-floor bathroom by replacing the claw-foot tub with a spa-like shower and adding a laundry. She located a wet bar – with a beverage fridge and a microwave – in the space that held a hall closet. “It served as our kitchen while the first floor was being done,” she explains.

The house is furnished with antiques, finds, mid-century, traditional and contemporary pieces. “I guess you’d call it eclectic,” she says of her personal style.

Outdoors, landscaping was refreshed in order to provide additional areas for entertaining, relaxing and dining.

“Where we spend our time depends on the season,” Sheri remarks.  “The second floor is really cozy in the winter. I like being downstairs in the summer. Even if we’re indoors, we get to enjoy the garden.” 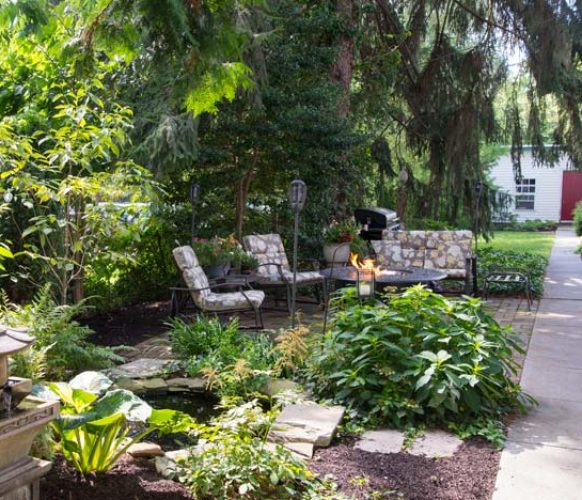 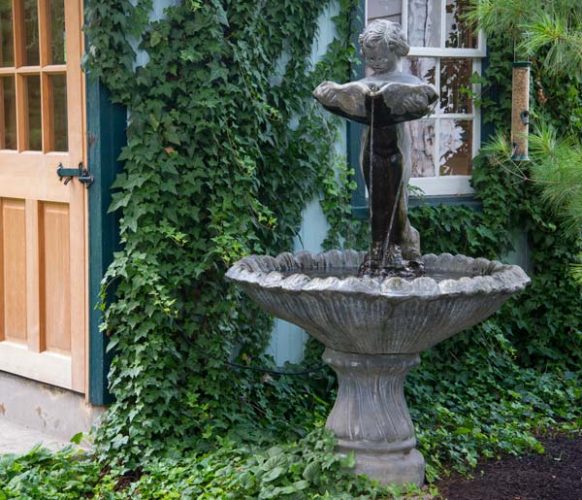 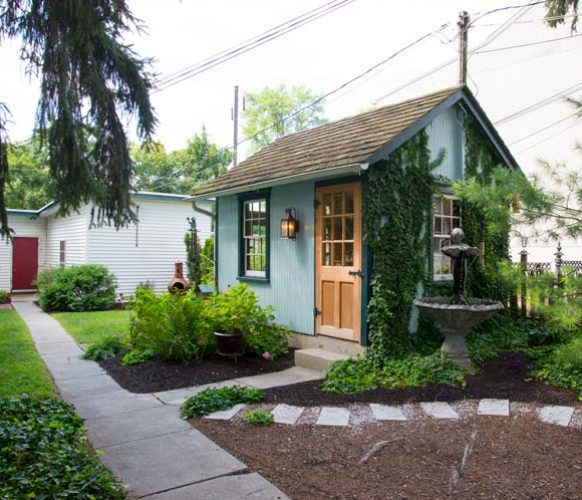 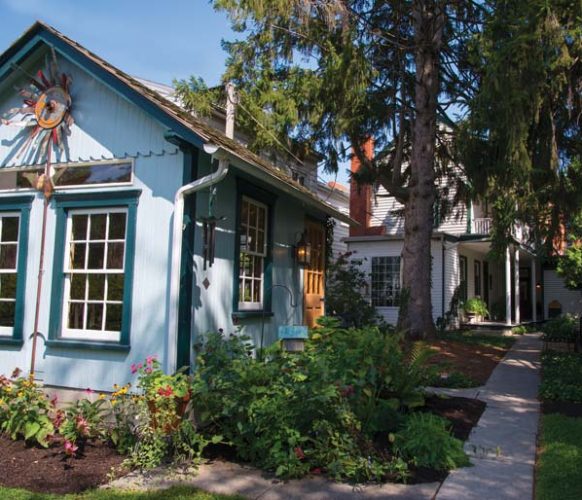 What was originally a chicken house has been given a new lease on life as Sheri’s pottery studio. The studio allows her to make the transition from work to home without leaving the property. 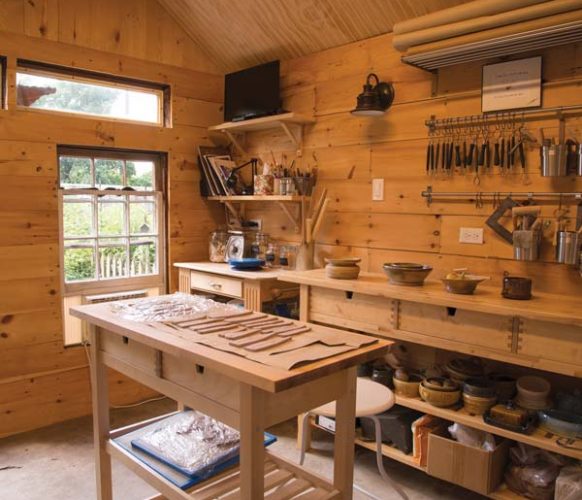 The interior of the light-filled studio is equipped with all the tools and materials Sheri needs to create her pottery pieces. Work tables help to keep things neat and organized. The firing and glazing processes are handled at Lancaster Clay Studios in Landisville.

As you can imagine, working where you live and living where you work have their pros and cons. The commute, of course, is effortless. Sheri also likes the fact that she can take a break at home (without having to drive there) prior to the arrival of an evening appointment.

However, she’s always aware that work is just on the other side of the door that separates the kitchen from her shop. “You have to learn to physically and mentally separate yourself from work once the day ends,” she explains.

She’s learned to do just that through a new hobby – pottery. “A friend talked me into taking a pottery class with her four years ago,” she says. Sheri fell in love with the art form and continues to take classes at Lancaster Clay Studios in Landisville. Her area of expertise is pears and bunnies. “But, I’m starting to explore other animals,” she reports, adding that she will be taking a three-day class in England this summer with an artist whose work she admires. “I follow the work of four or five artists in England who specialize in animals and when this class came up, I decided to look into the possiblity of taking the class and enjoying a vacation at the same time.”

Sheri is so engaged in her new endeavor that she has converted an old chicken house in the backyard into a studio. “I just like going back there and spending a few hours on hand-building and finishing work,” she explains. “You kind of get lost in what you’re doing.” Once projects are completed, they are taken to Lancaster Clay Studios, where they are fired and glazed. As for her finished projects, Sheri laughs and says, “Some I smash, and some I give away.” 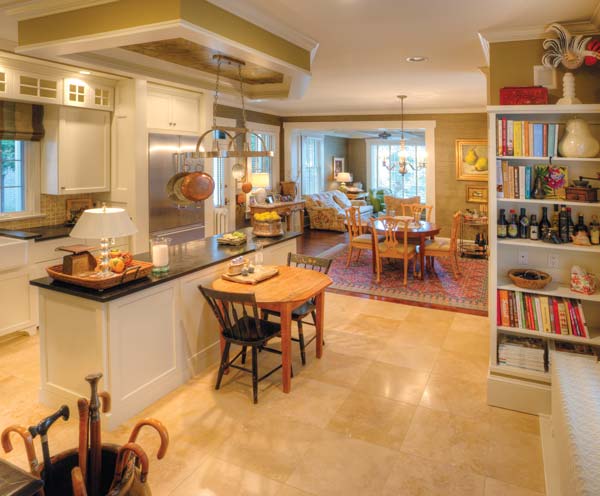 Sheri created an open floor plan by removing a wall that separated the kitchen and dining room. She also flip-flopped the rooms. The stained-glass window, which was created by Robert Horan of Chadds Ford, serves as a privacy screen from the neighboring property. Sheri purchased the breakfast table at a yard sale soon after she graduated from college. “I think I paid 50 cents for it,” she recalls.