If you think the co-owner of Field of Screams is crazy about Halloween, it seems he’s even more infatuated with Christmas.

In 2000, just prior to their wedding, Jim and Andrea bought a small farm in East Hempfield Township. Dating to 1847, the farm had been owned by six generations of the Hottenstein family. Since purchasing the property, the Schopfs have completely renovated the house, built an addition, restored the barn, installed a pool and outdoor-living area, replaced the garage, added walkways and reconfigured the driveway. “Our first project was having the bricks repointed while we were on our honeymoon,” Jim recalls.

The property also enabled Jim to indulge in his love of decorating for Christmas. “I’ve always loved Christmas lights, and I never do anything halfway,” he notes, recalling the year he hung wreaths in every window of the house and another year when he positioned Santa and his reindeer on the roof of the house. Andrea reminds him of the year he ran lights from the top of the silo, turning it into a gigantic Christmas tree. “I had some of the kids from Field of Screams help me with that one,” he admits.

The silo has become a Hempfield landmark, as it is topped by a star that can be seen for miles around. “That was an early project,” Jim says. “Getting it up there was crazy. It took six or seven guys to get it done.” The star is unique in that it’s backed by a design that takes the shape of a cross. It illuminates the sky during the Easter season.

Jim then discovered icicle lights and hung them from every eave of the house. “They would drive me crazy,” he laughs. “I’d come home and find a section was out, and it would put me in a bad mood. I knew how Clark Griswold [played by Chevy Chase in Christmas Vacation] felt!”

He also developed a habit of hitting the after-Christmas sales, which enabled him to add to his collection of lights and other decorations. It fell to Andrea, who is an artist and whose only request each year is to incorporate a manger into the display, to keep him in check. “Some years it bordered on gaudy,” she maintains. Jim defends himself, pointing out that he is yet to buy an inflatable Santa or snowman (which are not his style, he says).

During the renovation of the house, Jim incorporated some Christmas-related additions into the design. They included outfitting all the eaves with outlets that are tied into a timing system. (Timers were another nemesis for Jim, who says the prongs would either fall out or, in the case of an electrical outage, the lights would go on and off at haphazard times.) Now everything operates like clockwork. Jim also had all the windows hardwired for candles, which eliminated unsightly cords.

Last year Jim decided to make the switch to LED lights. “I did a lot of research online,” he remarks. “I don’t like the color and glow of a lot of them.” Satisfied he found the perfect candidate, he placed his order. “I didn’t have one problem,” he notes. “And, I noticed a big difference in the electric bill.” That’s a good thing, because Jim likes to keep the lights glowing through January. He adopted that custom as a result of snowmobiling in Quebec. “Everyone keeps their lights out all winter up there,” he says. “It makes you feel good to see them.” 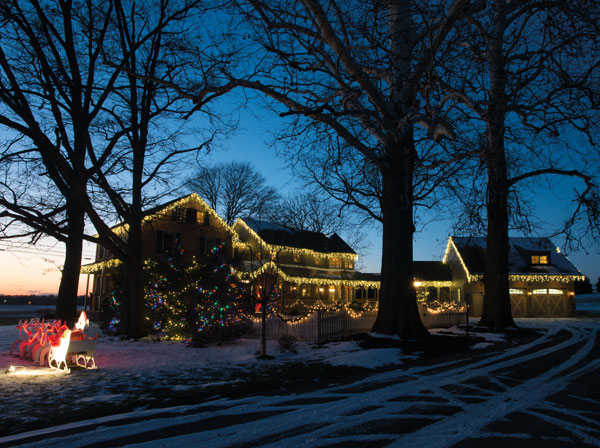 Last year Jim onverted all the lights that decorate the farm to LED. “I don’t know how to relax,” he says of his holiday decorating endeavors.