Having to cook in a kitchen that has seen better days can be drudgery. Joe Hess can attest to that, as his galley-style kitchen dated to the 1950s. “There was no way to glamorize it with words like ‘vintage’ or ‘mid-century,’” he says. “It was just plain awful.”

Five years ago, Joe and his now-husband, Darryl Coble, were in search of a new home. “We had been looking for a year,” he recalls. Their realtor, Nathan Mountain, steered them in the direction of a short-sale house in the Centerville area. He warned them that it needed work. “He wasn’t kidding,” Joe says. “It looked like it hadn’t received any love in quite a while. Plus, it had been sitting empty for over a year.”

When it was built in 1955, no doubt the house was representative of the building boom that was creating Lancaster’s suburban neighborhoods. It also conveyed a new age of living as it offered such modern amenities as a one-floor design, a carport, cement floors, radiant heating and a large lot. 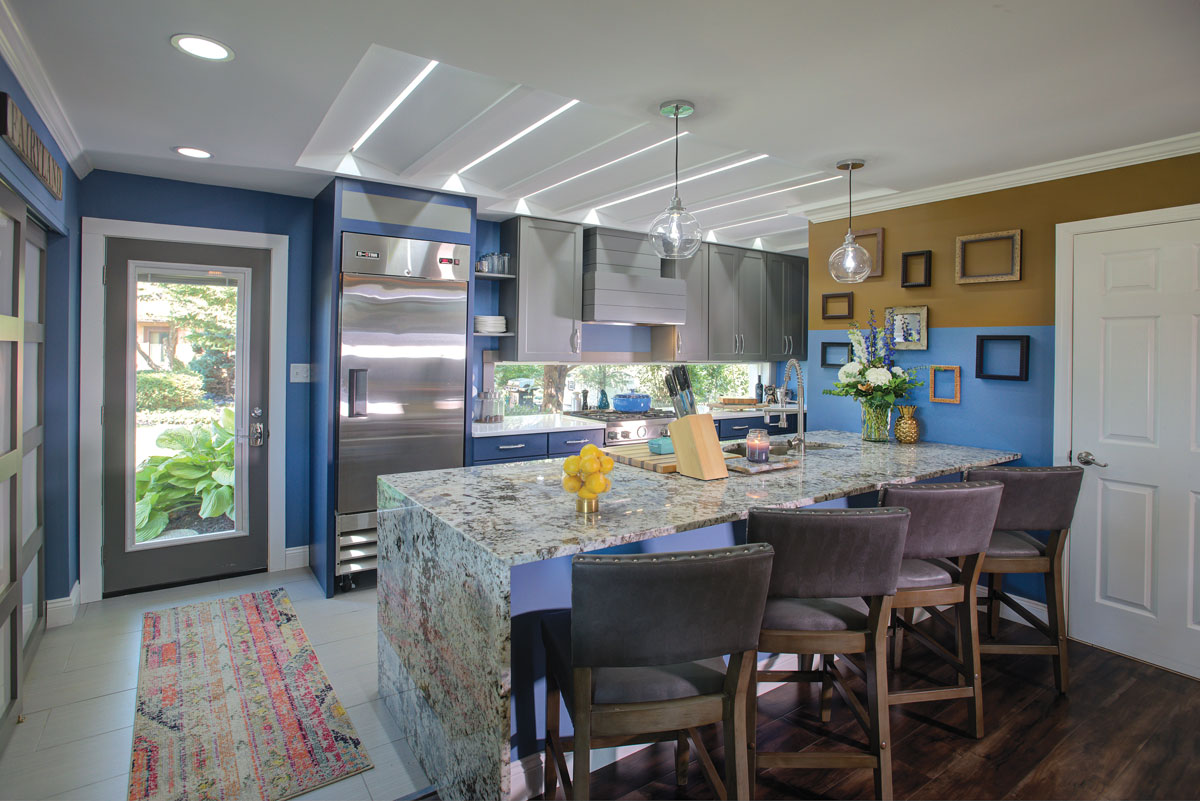 Jared Willwerth took a formerly dark and user-unfriendly kitchen and transformed it into a light and airy space that lends itself to cooking and entertaining. Innovative lighting and natural light – via the glass door and a backsplash-like window – helped to transport the space from 1955 to the 21st century.

Despite its problems, Joe fell in love with the sad-looking house. “I knew we could fix it,” he says, alluding to the evidence of neglect and DIY “remodeling” projects. The first item on the to-do list was to provide the house with a proper front door. 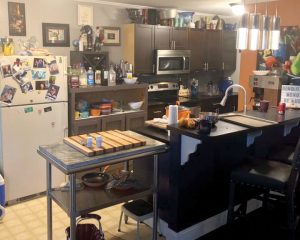 By the spring of 2018, the two had grown frustrated with the woefully outdated kitchen. “It just wasn’t fun to cook in there,” Joe says. Darryl had grown tired of hearing Joe’s complaints and suggested they do something to improve the space.

Joe has been involved in Lancaster’s restaurant and hospitality industry for more than 30 years. He has worked at some of Lancaster’s best-known restaurants, including Greenfield, Fenz and Luca. “Bob taught me everything I know,” he says of the late Bob Fenninger. “I miss him every day.” Through Bob, Joe was able to venture into party planning, consulting and catering.

Today, he is a partner in Cracked Pepper Catering, which he co-founded in 2016 with Christine Hess (no relation to Joe, but she is the sister of Central Market favorite Wendy Jo Hess, the former owner of Wendy Jo’s Homemade). “With Bob gone and the Lancaster restaurant and catering scene changing, we noticed there was a void to fill,” Joe explains. “Fortunately for us, the public has embraced Cracked Pepper.” 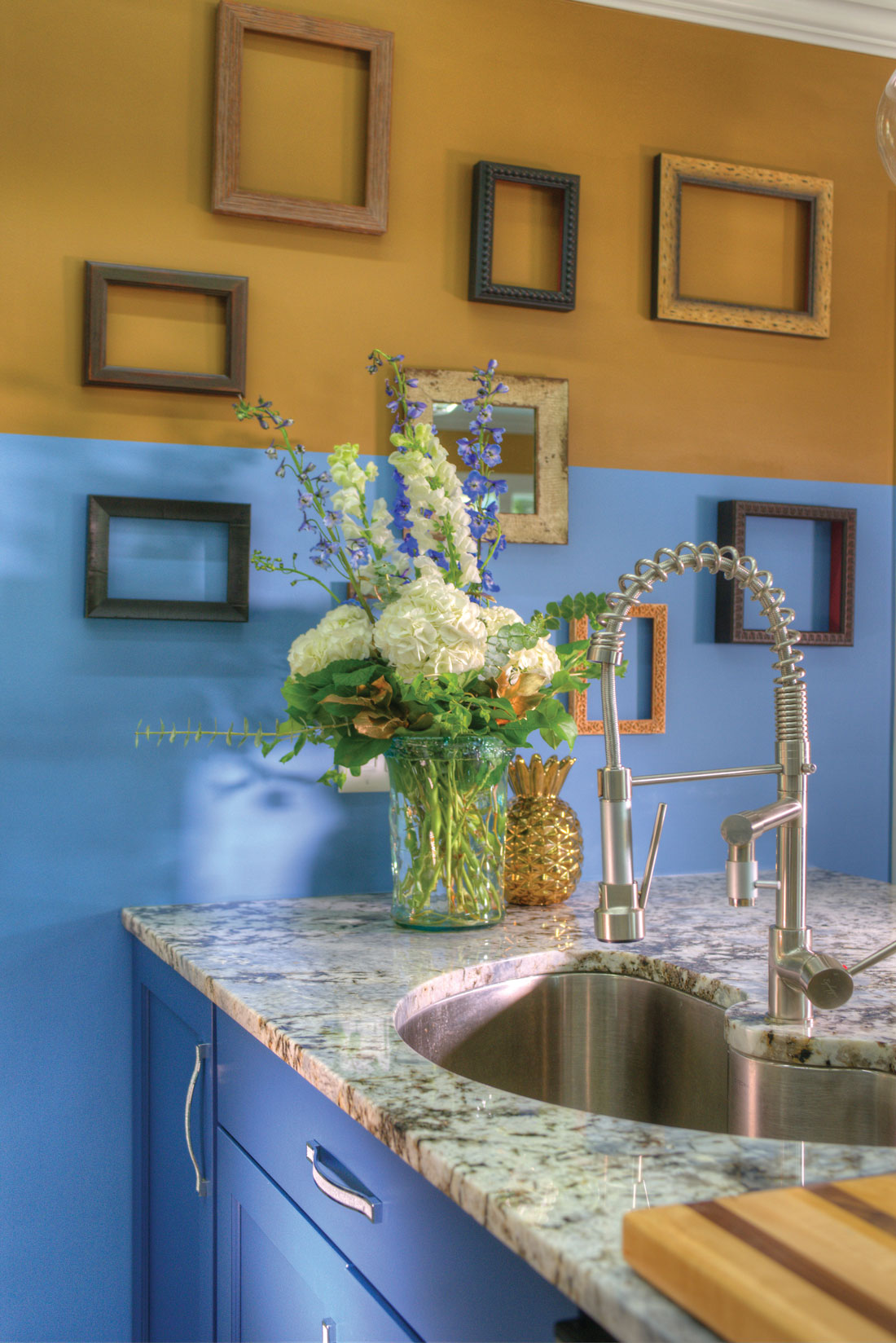 Cracked Pepper’s success prompted Joe and Christine to partner on a new venture – they will be taking over the space at the Lancaster Theological Seminary that was formerly home to Gypsy Kitchen. They plan to open Pepper Theo Café & Events this month. “We have so many ideas for the space,” Joe says. “I can’t wait for it to open!”

Early in his career, Joe met event planner Kaci Willwerth through working on restaurant and special events such as weddings and benefits. Life took them in different directions until several years ago, when they reconnected through volunteering their services to local fundraising events. Kaci and her husband, Jared, who heads Willwerth Construction, became fast friends with Joe and Darryl. 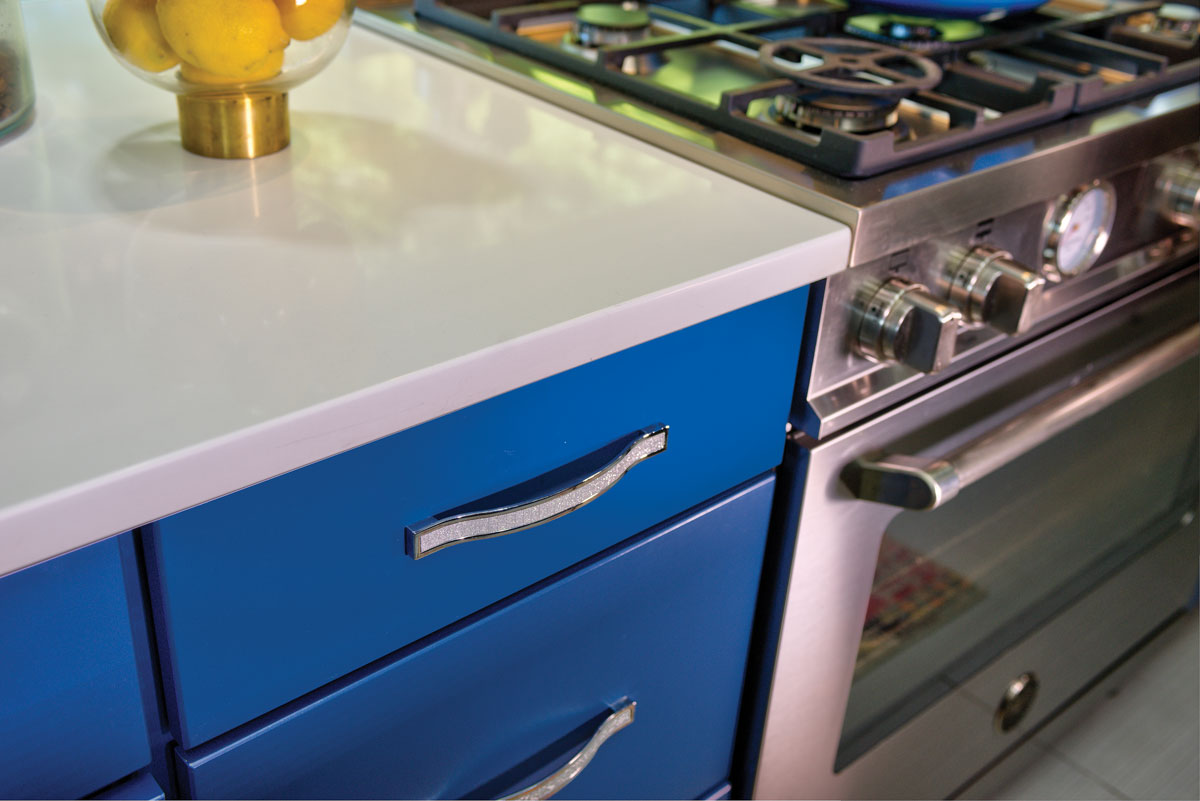 When it came time to design a new kitchen, Joe and Darryl knew who to call – Jared. The three came up with a game plan that called for retaining the galley styling but after that, it went full-out modern. “I like to push the boundaries,” Jared says of the design process. “In Joe and Darryl’s case, the kitchen not only had to ‘cook’ but it needed to entertain. It had to have the highest standards of functionality, yet bring life to the house. It needed to reflect who they are.”

The color scheme would be based on Joe’s favorite color – blue. Flat-panel upper cabinets – painted gray – would add to the modern spin. 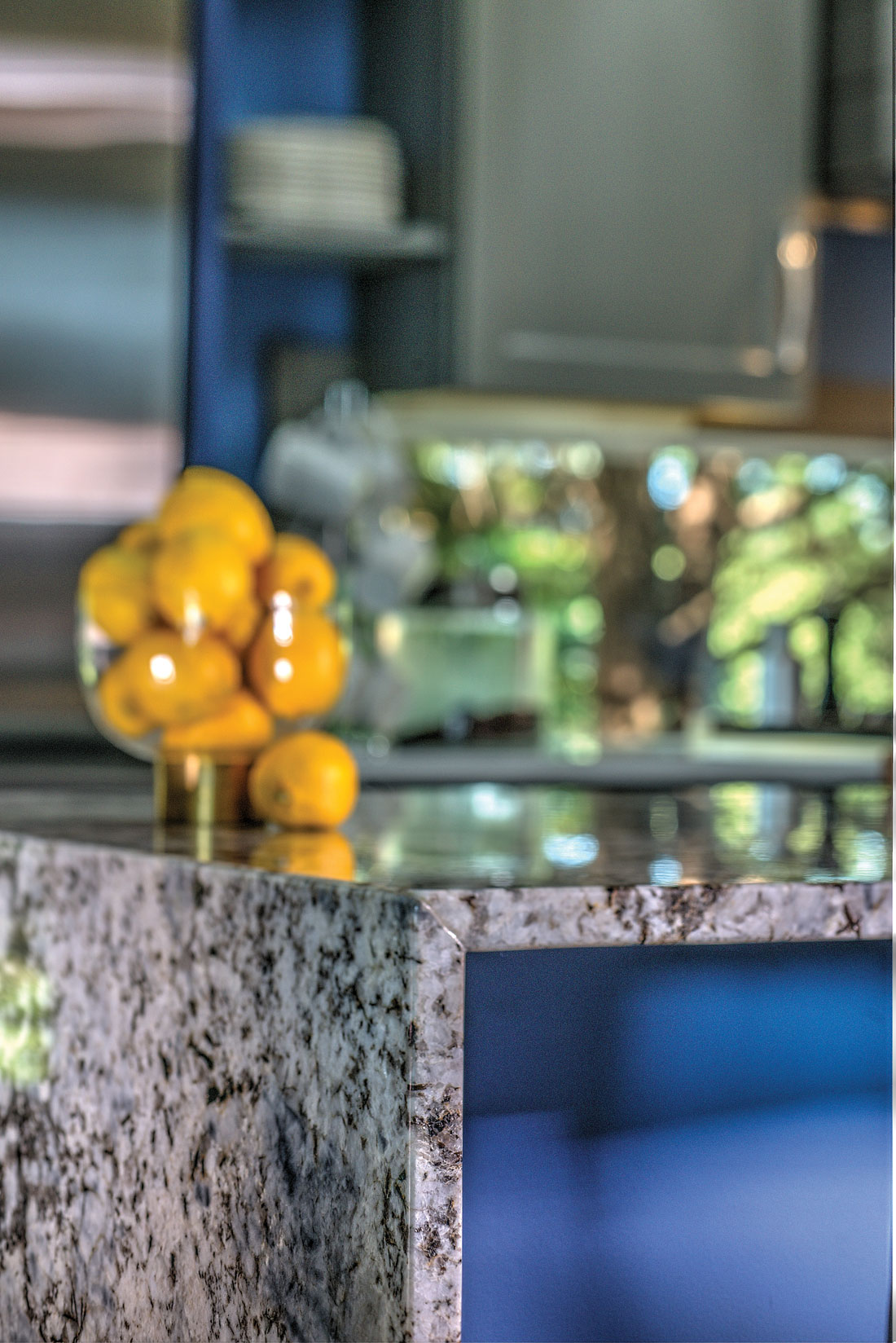 In Joe’s opinion, every kitchen needs a pop of bling, and in this kitchen that comes courtesy of the sparkling door pulls he and Darryl found through Amazon. The porcelain-tile floor also adds a hint of sparkle. Stainless appliances add shine.

Joe also maintains that every kitchen needs a splurge item and, in this case, that is represented by the Bertazzoni chef’s stove that provides all “the bells and whistles” one could desire. A commercial-grade refrigerator adds to the “chef’s kitchen” vibe.

From there, Jared’s creativity took over. He custom-built the shiplap-inspired surround that encloses the overhead range vent. He designed the multi-functional island to provide storage (including an under-counter freezer), prep space and a casual dining area. For large gatherings, it functions as a buffet.

The plan always called for topping the island with granite, but Jared encouraged Joe and Darryl to consider taking it another step and follow through with waterfall edging. “He kept saying it would be a game changer, so we went with his opinion,” Joe says. “We are so glad we did – it just adds that special finishing touch.” 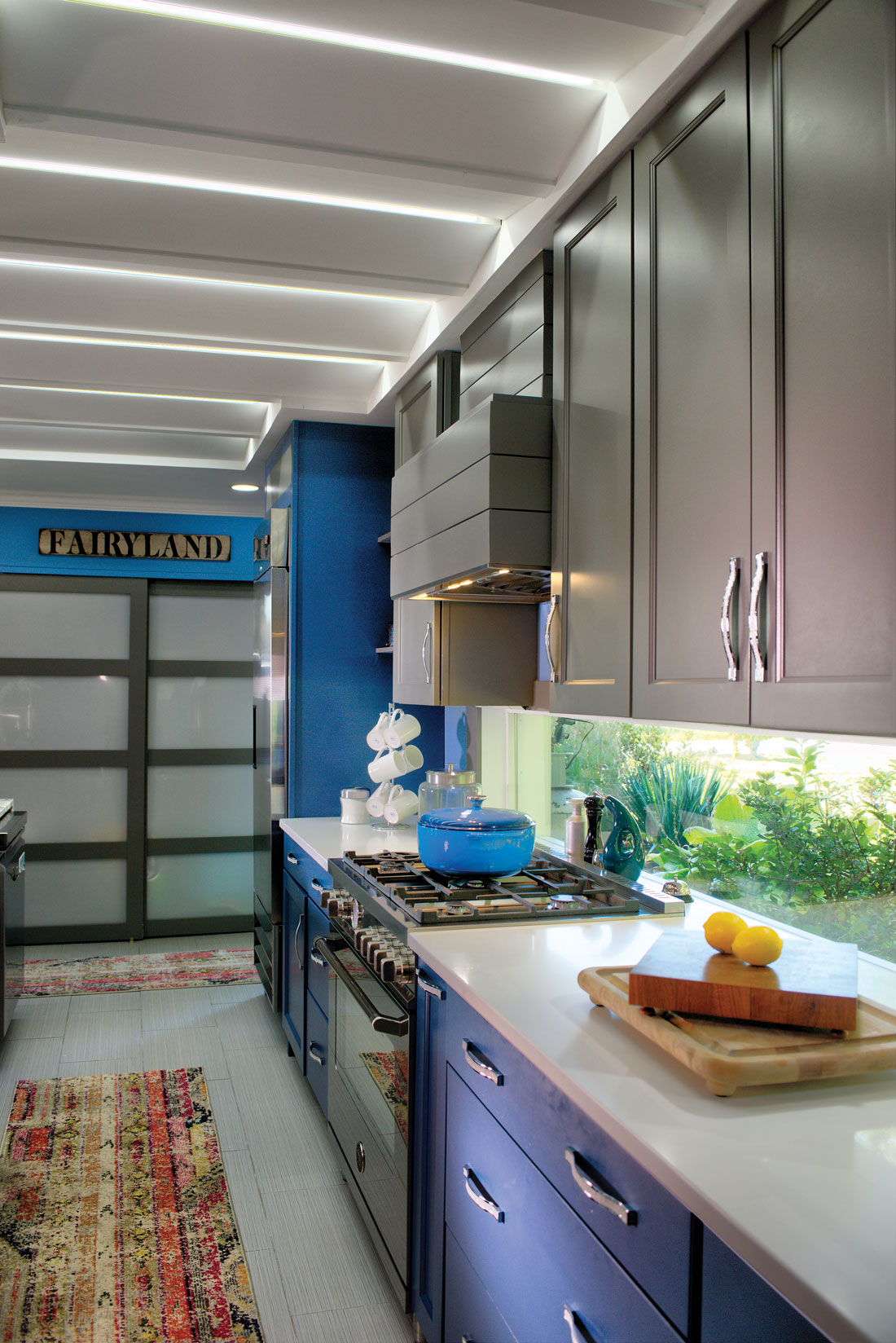 Lighting was another issue – the kitchen did not see the light of day. Jared remedied that by adding a side door that admits plenty of light. He also created a unique backsplash that takes the form of a long, slender window. “That was all his idea,” Joe says. “Everyone loves it.” Jared also designed a unique paneled ceiling that is illuminated with LED lights. He also provided Joe and Darryl with a pantry he crafted from stainless steel and plexiglass.

Best of all, Jared completed the job in HGTV-like time – as in nine days. “We were away for most of that time and when we got home, Kaci and Jared had a big sheet pulled across the kitchen so that we couldn’t see anything,” Joe recalls. “When they pulled the sheet away, we were blown away by our new, beautiful kitchen. Now, we’re going to have to remodel the rest of the house so it’s worthy of the kitchen.”

Joe attests that the kitchen is well-used. That was Jared’s goal, as well. In his opinion, a well-designed kitchen should be able to handle anything from a quiet dinner for two to a holiday bash for 20 (or more) with ease. 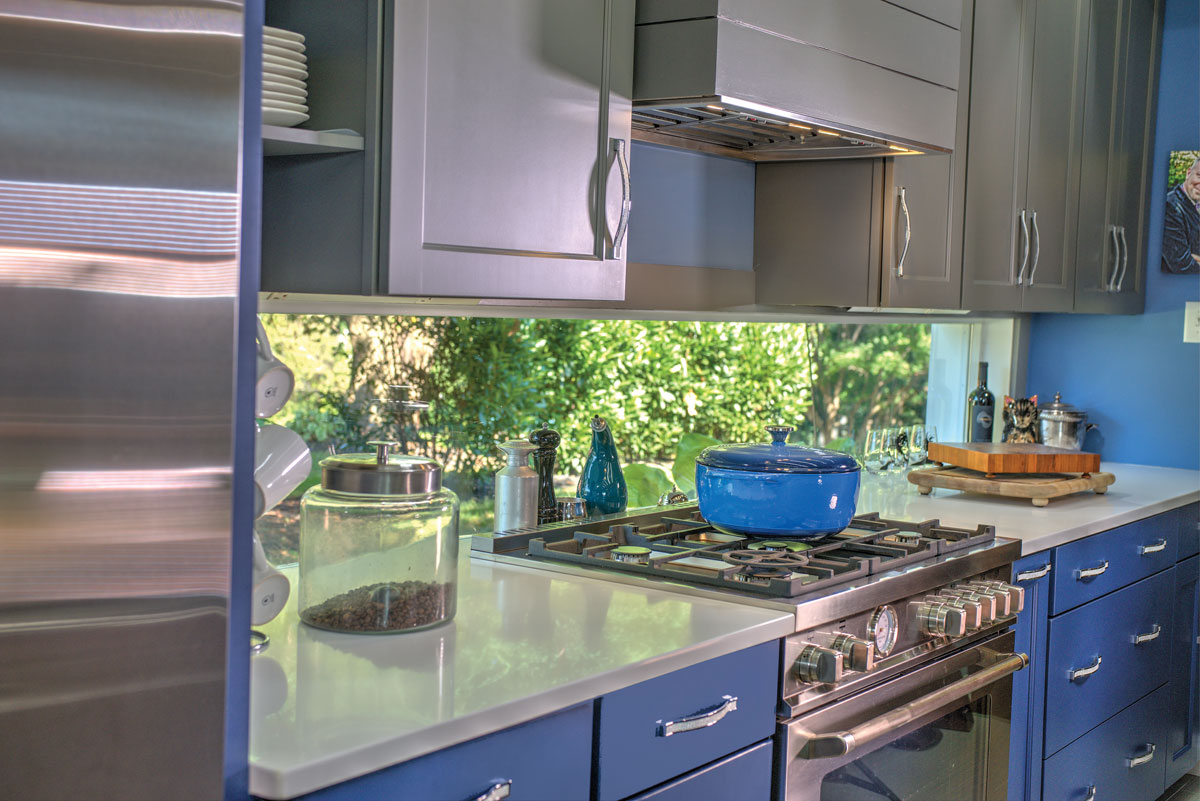 While catering jobs keep Joe busy, he and Darryl attend their fair share of fundraising events and do their best to support the local restaurant scene. Despite their hectic schedules, dinner at home is still their favorite way to end the day. “It’s not unusual for me to start making dinner at 10 or 11 p.m.,” Joe says. “Sometimes it’s something quick and other times it’s a full-out dinner. It gives me a chance to experiment and tweak recipes.” For Thanksgiving, he and Darryl prepared a feast for 40 guests.

Joe has noticed that clients are increasingly becoming more health conscious. Whether they are treating the office to lunch, hosting a dinner for clients or holding a gala benefit, including healthy alternatives and being cognizant of dietary restrictions have become a regular part of planning menus. Joe says Cracked Pepper welcomes this new way of entertaining. “Special requests allow us to really think outside the box,” he says.

The motto of convenience stores used to be “Cokes, smokes and gas.” Today, it could conceivably be, “Water, wraps and trail mix.”

Convenience stores, or C-stores as they are now more commonly called, were once known for those hot dog Ferris wheels, Drano-like coffee, sugar-laden drinks and other unhealthy transgressions. From an aesthetic and time perspective, you just wanted to get in and get out.

They were the domain of people who started their day early and wanted to grab a cup of coffee and a doughnut. For people on the go, C-stores provided a quick lunch stop. Travelers depended on them as did parents in need of Children’s Tylenol late at night.

Jared Willwerth admits he is a regular visitor at C-stores. The business owner and father of two is a busy guy. Because of his wife Kaci’s schedule, he is often on daddy-duty evenings and weekends. Since he launched his business 11 years ago, Jared has noticed a huge shift in what C-stores now have to offer. In his estimation, C-stores (and fast-food restaurants) “have definitely upped their games” where healthy food is concerned. Even the atmosphere has shifted, as most C-stores are spacious and light-filled. Some are even restaurant-like.

C-stores are big business – to the tune of an estimated $600 billion a year. According to the National Association of Convenience Stores (NACS), there are more than 150,000 convenience stores in the United States, with 7-Eleven leading the way with nearly 9,300 (as of March 2019). Wawa is the largest independent, with 850 stores, while Altoona-based Sheetz has 600 (both are growing). Turkey Hill Minit Markets, which is owned by the EG Group, has approximately 270 stores in Pennsylvania and Ohio.

Pennsylvania ranks ninth in the nation, with nearly 4,800 stores to its credit. Because of its diverse population and workforce, Lancaster has become a magnet for C-stores, with Turkey Hill, Sheetz, Rutter’s, Wawa and Royal Farms opening and remodeling stores on a consistent basis. Additionally, there is a proliferation of corner stores that dot Lancaster City and the county’s small towns.

Realizing that cigarettes and sugar were becoming losing propositions, C-stores began to look for other ways to keep their 160-million daily visitors coming through the doors. The foodie movement and an emphasis on healthy alternatives prompted C-stores to embrace a new food culture. It gained more traction in 2016, when NACS welcomed Partnership for a Healthier America (PHA) to attend its trade show in Chicago, which led to a collaboration that has further helped to fuel changes in the selection at C-stores. More than 2,500 C-stores, including Sheetz, have committed to the program. Chicago-based Pride Stores even has a corporate chef on staff.

Today, while C-stores continue to stock their shelves with a wide selection of candy and other snacks, they also provide such healthy alternatives as made-to-order food, yogurt, cut fruit, water, nuts, protein bars, trail mix, dried fruit, string cheese, salads, whole-grain cereal cups, fruit/veggie juice, granola bars, sunflower seeds and meal-replacement drinks. Some have taken the extra step and are offering organic, non-GMO, gluten-free and antibiotic-free items. Even the coffee selection has expanded. One company, Terrafina, has had unprecedented success with packages of nuts, trail mix and dried fruit that fit perfectly into the cup holders of vehicles.

Jared Willwerth took a formerly dark and user-unfriendly kitchen and transformed it into a light and airy space that lends itself to cooking and entertaining. Innovative lighting and natural light – via the glass door and a backsplash-like window – helped to transport the space from 1955 to the 21st century.