They met at Central Market. Got engaged at the same market stand where they first encountered each other. For this Lancaster-born and Lancaster-loving couple, it was a must that their wedding day be celebrated in the heart of the city.”

Chad Snyder spent his first 13 years in his family home that also served as the family business: the Charles F. Snyder Funeral Home on East King Street in Lancaster. Lee Shand’s family’s business sat just a few blocks away at Penn Square – the landmark Watt & Shand department store. The venerable store was founded in 1878 by Lee’s great-grandfather and his partners, was sold to the Bon-Ton in 1992, later closed and was eventually reborn into its present life as the Lancaster Marriott and Lancaster County Convention Center.

With deep local roots like these, this couple’s destiny to be together seems written in the stars. Well, it wasn’t quite that simple.

Mid-20s Lee was living it up in the Big Apple, working for L’Oreal, the international cosmetics company. Thirtyish Chad was enjoying bachelor life in Lancaster and following in his father’s footsteps as the family’s business grew. It took a 125th Anniversary Gala to bring them to the same place  – Central Market in downtown Lancaster.

Eighteen months later, Chad popped the question with flowers in hand and photographer standing by to capture the big moment that again took place at Central Market. 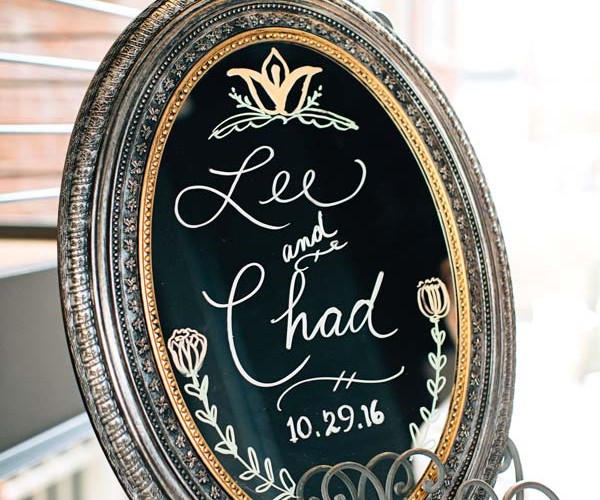 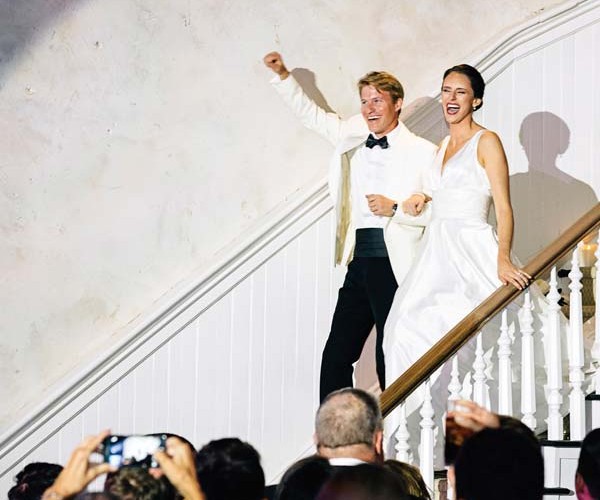 The newlyweds make a grand entrance at their reception, which was held at Excelsior. 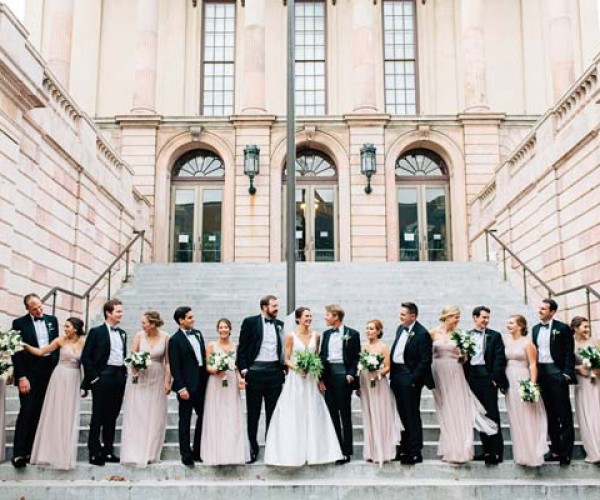 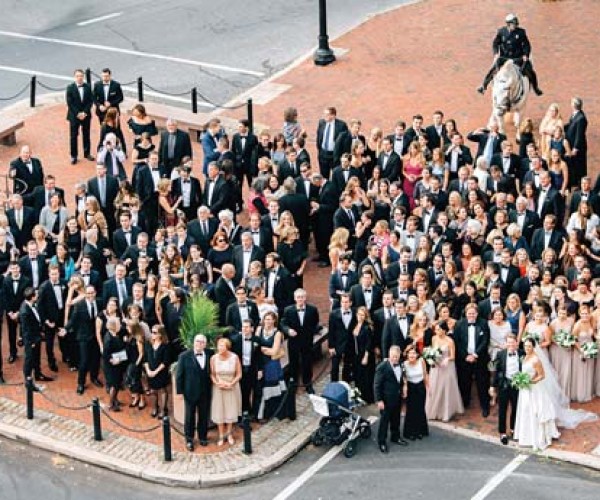 After the ceremony, guests gathered in Penn Square for a commemorative group photo. 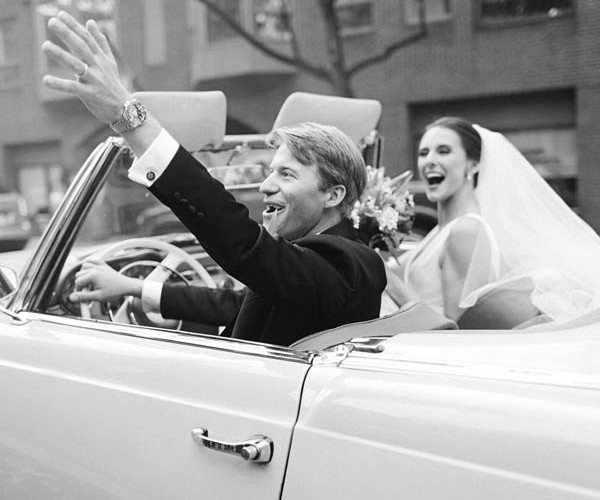 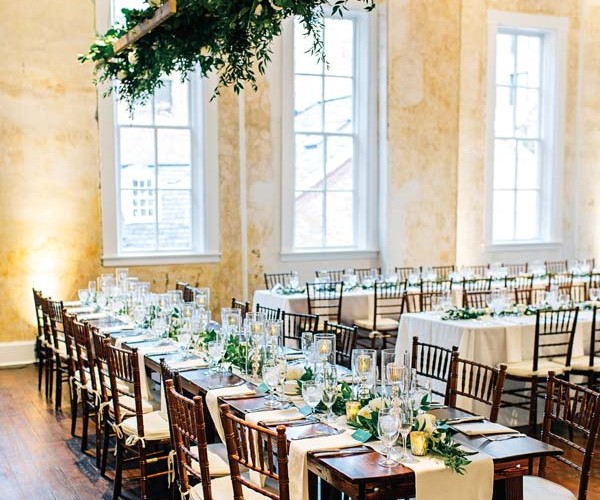 The king’s table concept has become a reception-dinner favorite with couples. 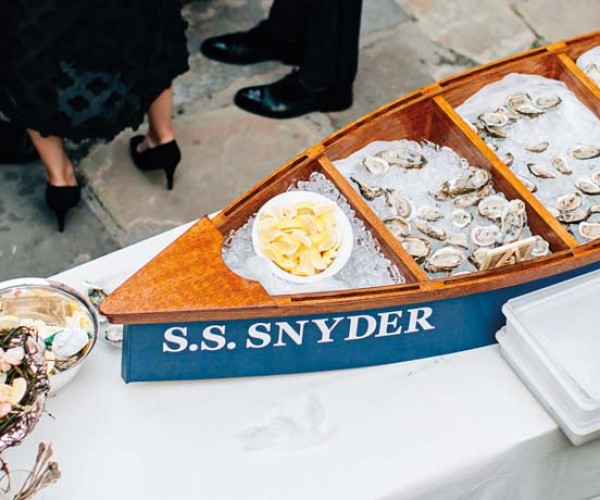 Chad’s love of sailing was conveyed with this unique serving “vessel.” 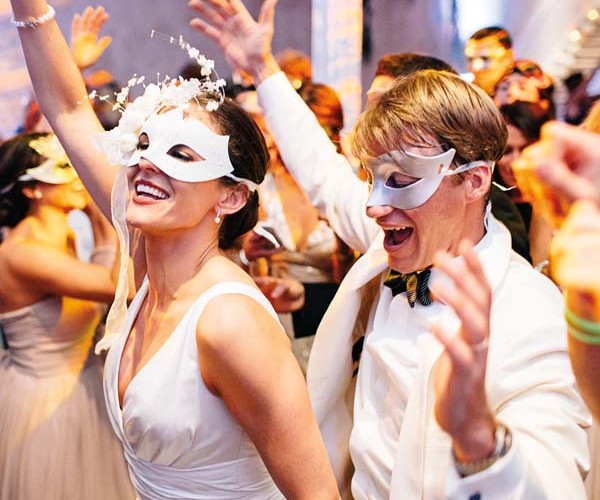 In honor of Halloween weekend, the reception morphed into a masquerade party following dinner.

Naturally, the wedding day would continue the theme, celebrating the many ways that the heart of Lancaster was entwined with their own hearts – through their past childhoods, their shared present and their planned future of making a life together in their city.

Their day began as a picture-perfect, warm fall day, the Saturday of Halloween weekend. It was a year ago that very weekend that Lee moved back to Lancaster to be closer to Chad and a new career opportunity. Guests were invited to St. James Episcopal Church at Duke and Orange streets to witness the vows at 2 p.m. Arriving guests were greeted outside the church by a four-legged family member, the couple’s dog, Otis. “We came up with the idea of including Otis in the big day as we were walking him through the downtown streets a few months before,” Lee explains. “He already had a natural tux,” Chad notes, citing the Bernedoodle’s signature black-and-white markings.

The ceremony was officiated by priests from the Greek Orthodox, Roman Catholic and Episcopalian churches to honor family members’ religious backgrounds. 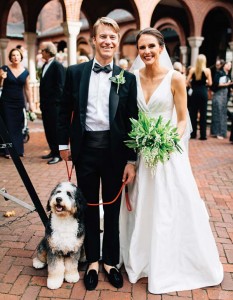 The couple’s dog, Otis, was on hand to greet guests and pose for post-ceremony photographs.

After the vows were made, guests were instructed to take their time in walking the few blocks to rendezvous in Penn Square at 5 p.m. The bride and groom had thoughtfully provided a map noting their favorite coffee houses and restaurants along the route where guests could stop for a libation, while the wedding party and family members stayed behind for photographs.

As guests gathered outside the former Watt & Shand building, where four generations of the bride’s family had been involved in the business, a photographer and drone were poised high above the crowd. The bride and groom arrived at Penn Square in a vintage ’66 Mercedes convertible; they joined the party, and the shot was ready to be snapped.

Lancaster’s mounted police stood by to escort the wedding party and guests up East King Street to Excelsior for a reception that began and ended with dancing. The bride and groom made a dramatic entrance as they descended the sweeping staircase of Excelsior’s ballroom. They kicked off the party with their “first dance,” and then led everyone to the second floor for a seated dinner, seasoned with heartfelt and humorous toasts. 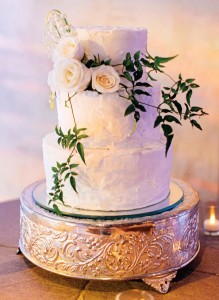 Following dinner, dancing resumed downstairs and, in a nod to Halloween, glitzy masks were passed around by the waitstaff; the evening morphed into a glamorous masked ball.

Late-night revelers moved on to Tellus360 for the After Party, a private DJ-fueled gathering where the bride and groom – powered by post-wedding adrenaline – kept the party rocking until 2 a.m.  When guests returned to their rooms at the Marriott, they were delighted to find baskets of Lancaster-made goodies like Hammond’s pretzels, Miesse candy and homemade whoopie pies – all from Central Market – waiting for them.

In a few short hours, Sunday morning came a-callin’, and about 100 of the wedding’s 275 guests joined the bride and groom for a “Hangover Brunch” in the Marriott’s Montgomery House, capping a weekend-long celebration that Chad describes as “exactly what we wished for” – personal, unique and showcasing some of the best of the couple’s beloved downtown Lancaster. 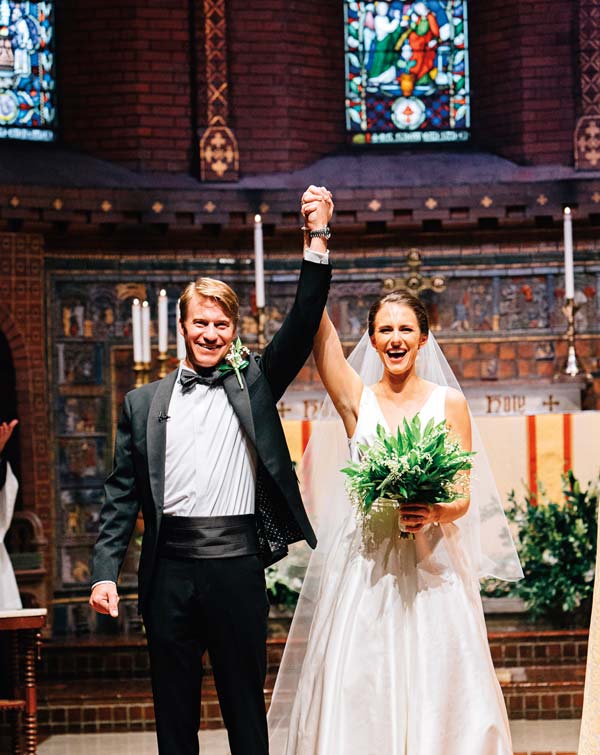