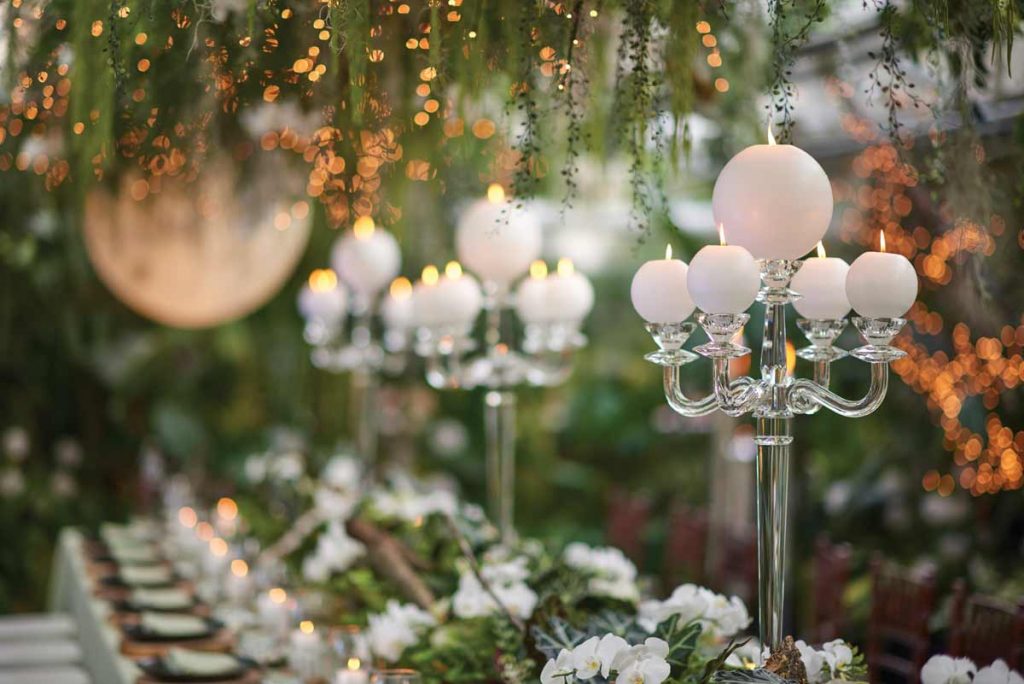 Candlelight, white twinkle lights and a moon that glowed brighter as the night progressed (thanks to spotlights) helped to transform a greenhouse into a midsummer-inspired dining room.

It was Tim Arpin and James Henning’s turn to host a party for their dinner club. They chose a date, came up with a theme and issued their invitations. The RSVPs arrived instantaneously!

A party at Tim and James’ home always equates to a bona fide event! The detail-driven twosome ensure that is always the case, whether it’s a casual barbecue for six on a Sunday afternoon or a black-tie cocktail party for six dozen on a Saturday night. 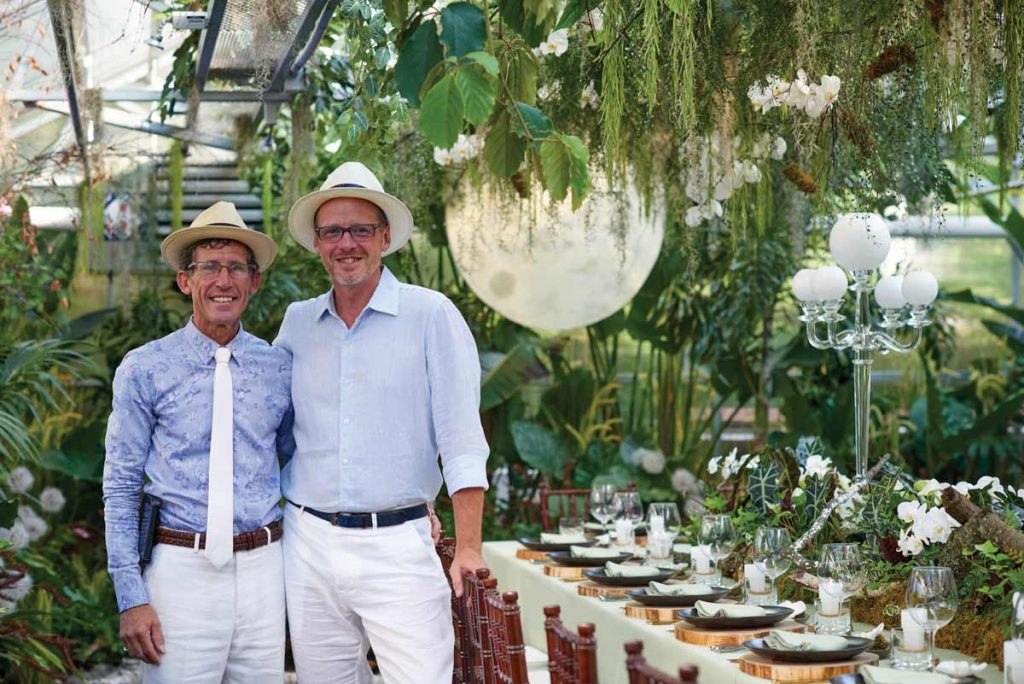 Tim Arpin and James Henning utilized A Midsummer Night’s Dream theme for three parties. They devoted a month’s time to emptying the greenhouse and designing and installing the decorative elements. Fortunately, all three parties managed to dodge the rainy weather that defined the summer of 2018.

Still, the party they hosted last summer would represent some firsts for the owners of The Gilded Lily, which Tim founded 30 years ago. The Kansas native arrived in Lancaster in 1987 to work for Witmer’s Greenhouses. After launching The Gilded Lily, he bought a property near Columbia in 1993, building greenhouses and a warehouse over the years to keep pace with the growth of his company. Since then, he’s provided residential and commercial clients with his trademark horticultural services and has helped brides, corporations and nonprofit organizations transform venues into over-the-top party sites. “We can make magic happen,” Tim says.

Thirty years of working with clients and other vendors has led The Gilded Lily to add a new level of service to its menu: party planning. “We can create the style of a party – from soup to nuts – and take a venue and transform it,” Tim explains. “If we don’t have what we need in our inventory, we can source it.” 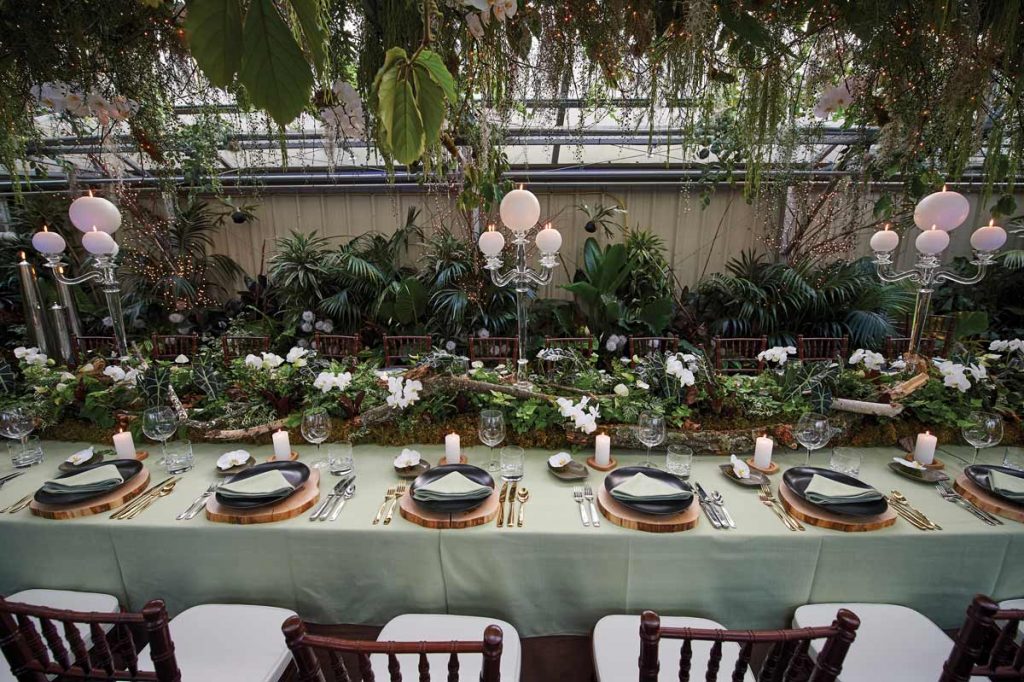 Place chargers were made from a tree that was taken down on the property. Sarah and Brian Laborde created them as a gift for Tim and James.

He points to a woodland theme that completely transformed the Lancaster Country Club’s ballroom. Barns, meadows, an airplane hangar, restaurants, private clubs and museums have all lent themselves to the looks and themes Tim and James devise for celebrations and fundraising events. “We’ve completely redecorated rooms in private homes for parties,” James adds. They are looking forward to designing and executing a party at Wildcat Bluff, a nature preserve in York County, where the Lancaster Conservancy will be celebrating its 50th anniversary later this year.

Despite its reputation for being conservative and traditional, Tim maintains that “party town” has become an apt description of Lancaster. “It’s a socially active community – if you want it to be,” he says. “It seems there’s always something going on to support or celebrate.” 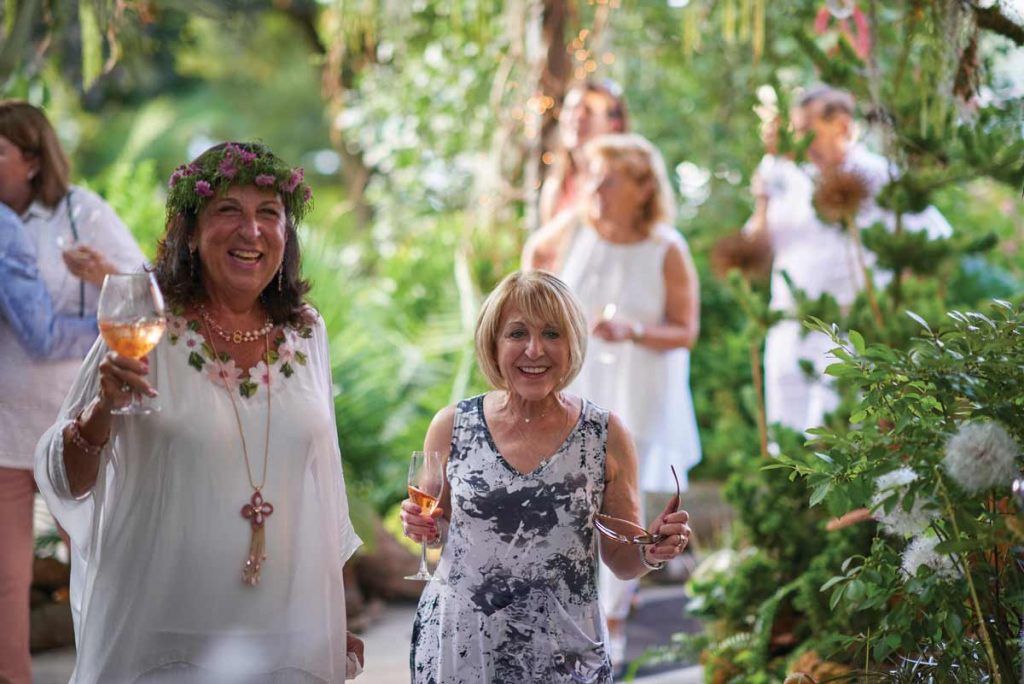 Guests were requested to wear white for the dinner club party. Pictured are Mary Ann Garrett (left) and Shelly Gunzenhauser.

For last year’s party at their home, Tim and James wanted to create a little magic of their own for guests to enjoy. They started making plans just as spring arrived. Tim had always wanted to hold a party in one of the greenhouses and decided the summer of 2018 would provide that opportunity. The location lent itself to a theme Tim always toyed with using – Shakespeare’s A Midsummer Night’s Dream. He did some research on the play’s background and watched the movie version, which debuted in 1999 (to mixed reviews) and starred Kevin Kline, Stanley Tucci, Christian Bale and Michelle Pfeiffer among others. He loved the look of the film and the notion it conveyed – summer magic and a night in the forest. 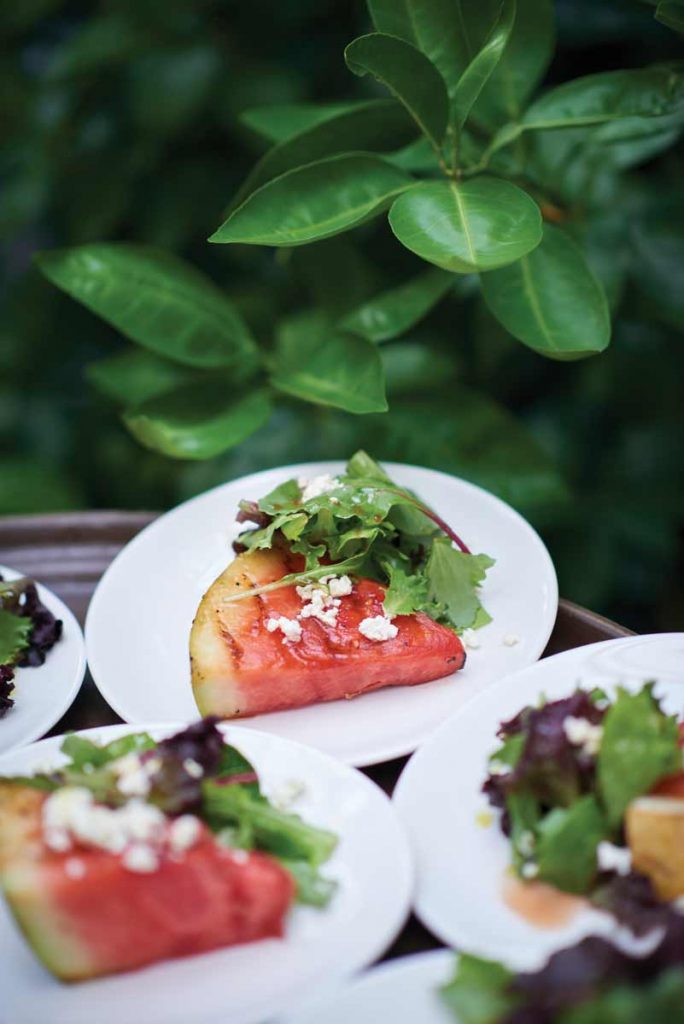 Another first also figured into the theme – the setting would be used for three separate parties: one for Tim and James’ dinner club, The Rascals, which was formed in 2015 by members-turned-friends of the Hamilton Club’s Holiday and Major Events Committee; another for the winners of an auction that was held during a benefit for the Lancaster Symphony Orchestra; and, finally, a party for the employees of The Gilded Lily. Incredibly, each party managed to escape the wrath of Mother Nature’s incessant storminess that defined the summer of 2018. “Last year had to be the most frustrating summer I’ve ever experienced from a gardening perspective,” Tim says. “The weather definitely posed a challenge for everything from gardening to weddings and outdoor events.”

Of course, the look of the party would be paramount to its success. Lighting would be critical. Since the grounds are always aglow, Tim and James decided to concentrate on filling the greenhouse with thousands of white LED twinkle lights. Candles and dramatic crystal candelabras defined the 25-foot-long dining table that was elevated on a stage and covered in soft-green linens. A moon, which Tim created years ago and has used in many projects, would grow brighter as dinner progressed. 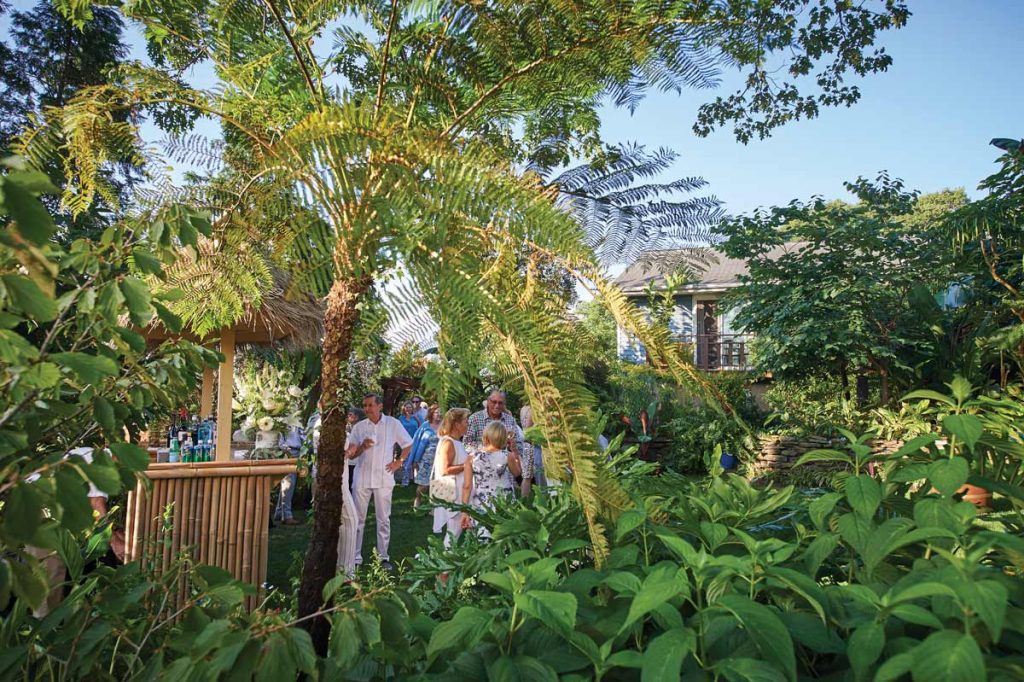 The tropical gardens provided the backdrop for cocktail hour.

To create the requisite forest look, Tim and James created custom planters that were wrapped in sheet moss and planted with orchids, ferns, ginger plants, peace lilies, bird of paradise, creeping fig, ivy, alocasia and rattlesnake calathea. Birch branches also filled the 20-foot-long planters that encircled the interior of the greenhouse. A miniature version of the planters traveled the length of the dining table.

Overhead, similar plants were joined by fresh Spanish moss, tetra stigma and various vines. “Just about everything was sourced from our inventory,” Tim reports. The exceptions were orchids, which were sourced in Holland, and the faux dandelions that were custom made in China. “We saw them at a Christmas show in Germany,” Tim explains. 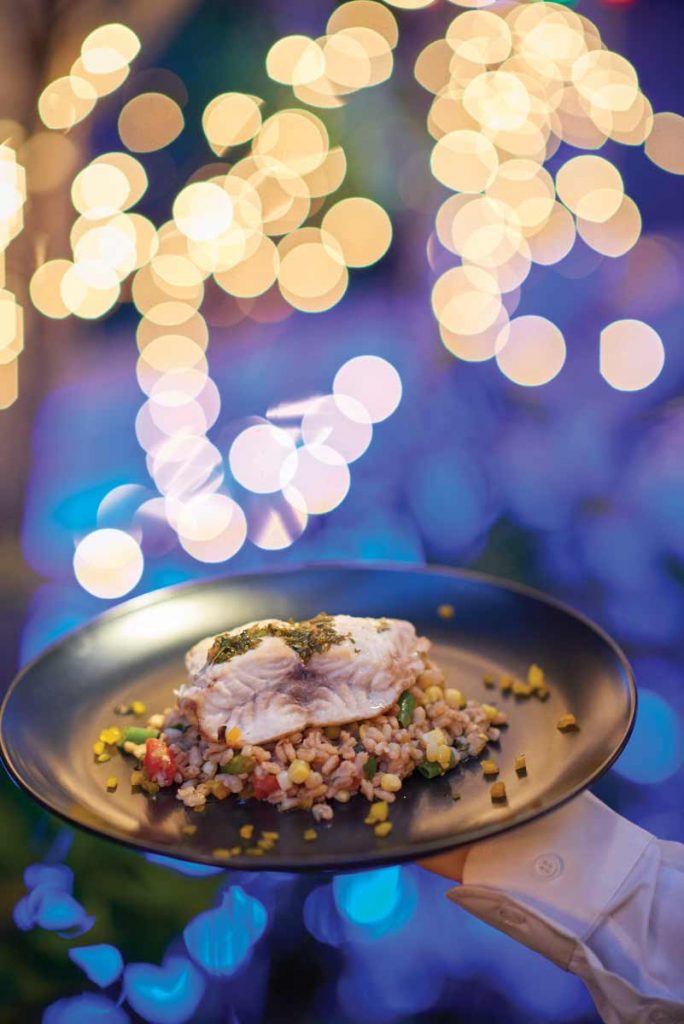 As for the menu, Tim and James envisioned a summer harvest theme, and the culinary team from the Hamilton Club took it from there, creating courses that celebrated the bounty of the season.

But, before the sun began to set in the west, guests were entertained in the tropical gardens that define the backyard. So as to change up the look for guests who are frequent visitors, Tim and James rearranged the furniture, moving it from the deck and patio and onto the lawn. The bar, which mimics a tiki hut, was also moved onto the lawn in order to eliminate traffic jams. “Moving the furniture created more mingling space,” Tim explains. The deck was turned over to harpist Louis Lynch. 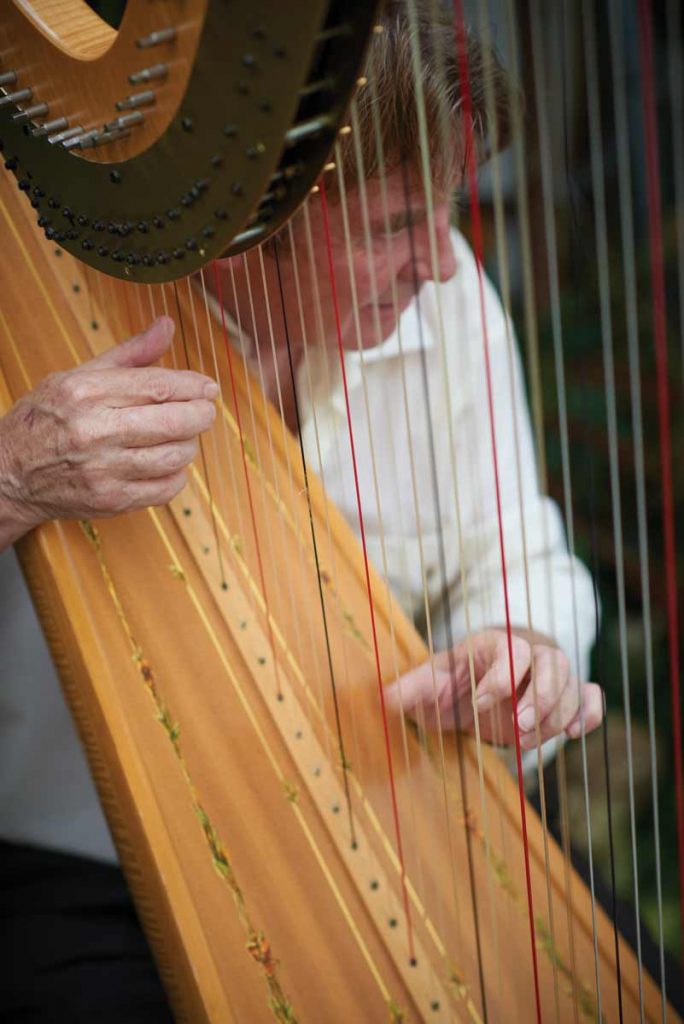 Harpist Louis Lynch provided the perfect background music for the theme of A Midsummer Night’s Dream.

Finally, the magic hour had arrived. It was time to move into the greenhouse for dinner. As guests entered, gasps of amazement resounded across the property. A few days later, the thank-you notes began arriving. One guest expressed thanks for being invited to “the most beautiful and elegant dinner party” she had ever attended. Tim and James had obviously worked their magic! 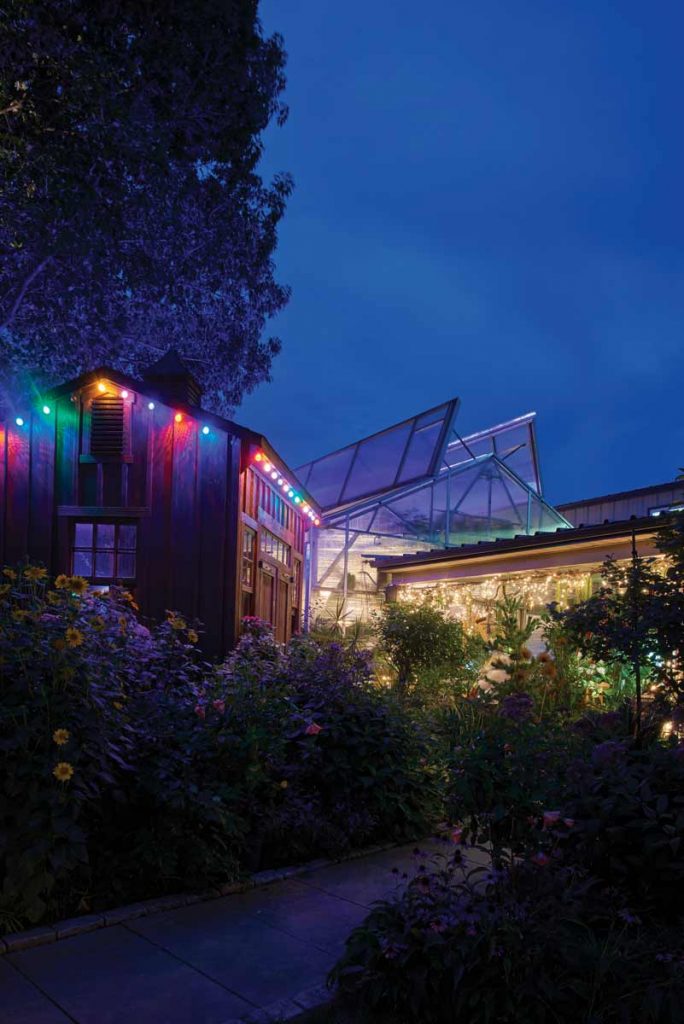 Lighting accents the grounds on a year-round basis.

The Story Behind A Midsummer Night’s Dream

Whether you celebrate the Summer Solstice, Mid-Summer’s Eve or St. John’s Feast Day, the traditions behind the longest day of the year are as old as time.

The tradition of celebrating the Summer Solstice dates back to pre-Christian days, when it was customary to salute the power of the sun with bonfires that symbolized the notion that fire possessed the ability to cleanse and cure people of disease and curses, as well as protect them from danger. Plants that had healing powers were also collected on the eve of the Summer Solstice and fashioned into garlands that were worn on the head. Because evil forces were perceived to be at their weakest, weddings were performed. 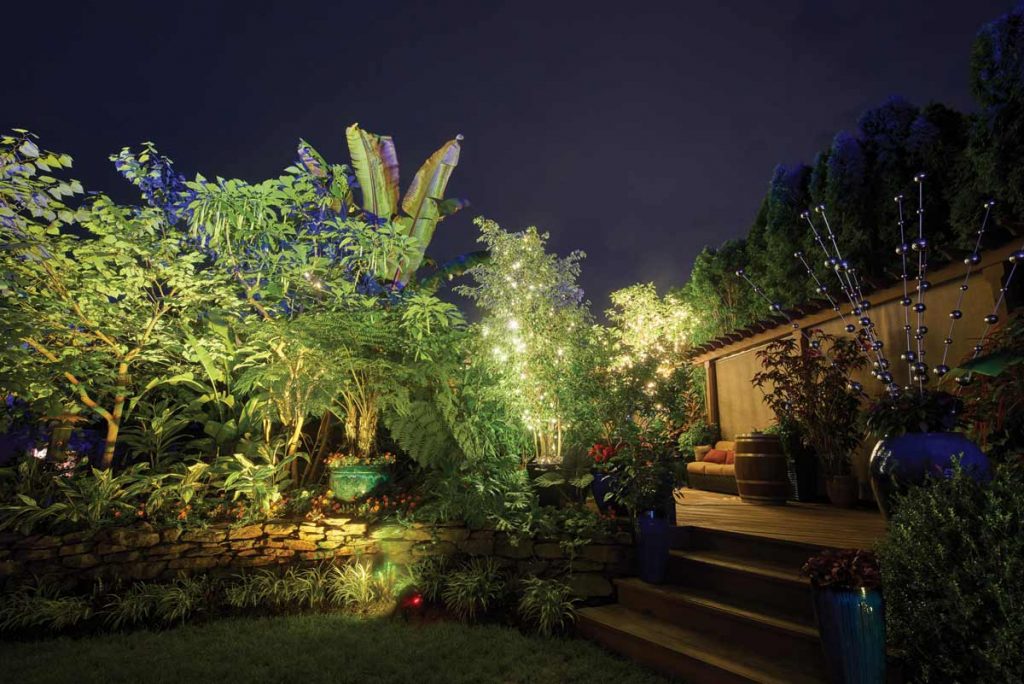 To changes things up, Tim and James nearly emptied the deck and patio of furnishings and placed them on the lawn in order to encourage guests to mix and mingle.

As with many holidays, the Christian world sought to take elements of pagan traditions and add religious connotations to them. The Summer Solstice followed suit, as it became a day to honor St. John the Baptist, whose birthday is celebrated on June 24. In fact, it’s one of the oldest festivals celebrated in the Christian world.

Today, many parts of the world – notably Europe and Canada – celebrate St. John’s Feast Day. While bonfires still illuminate the night sky on the eve of the feast day, they now pay homage to the warmth and light of the sun. The day has also become family and friend oriented. For example, in areas of England, residents place tables outside their homes and fill them with bread, cheese and beer for passersby to enjoy. Families gather for festive dinners. In churches, attendees pray that St. John will bless the summer season.

The Summer Solstice (June 21) is celebrated worldwide, with sites such as Stonehenge and the pyramids in Egypt being popular destinations to greet the first day of summer. In the United States, the Summer Solstice is celebrated with a yoga session in Times Square and multi-day festivals in Seattle, Santa Barbara and Anchorage among others. Fairbanks, Alaska, celebrates with a baseball game that gets underway at 10 p.m. and utilizes only natural light – the midnight sun – for the duration of the game. 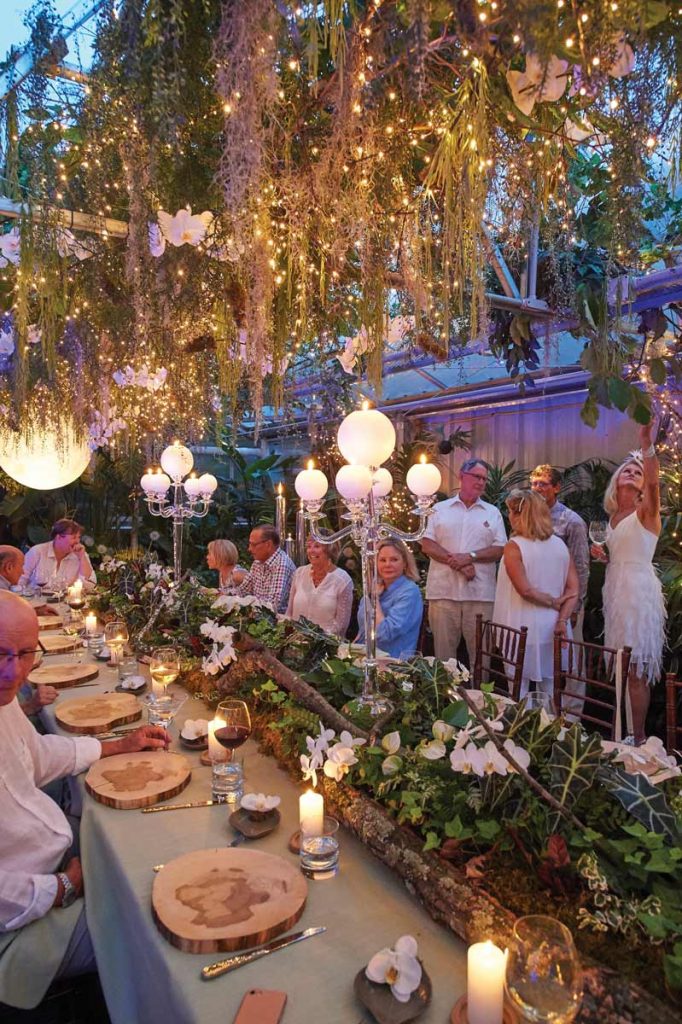 During Shakespeare’s time, the Summer Solstice was called Midsummer’s Eve. The Elizabethans viewed the period as a time of mystery and magic and believed the line that divided the human and spirit worlds was at its most vulnerable. Unlike Halloween, the spirit world did not have evil or spooky connotations; instead, fairies embodied the spirits whose purpose was to orchestrate romance. Young people believed that they could conceivably meet their future spouses on the day in which the sun reached its highest point in the Northern Hemisphere sky. It also was a popular time to wed.

In 1595-96, Shakespeare took the traditions surrounding Midsummer’s Eve and created a play that addressed various themes that relate to love – unrequited love, defiant love and the lunacy of love all play out in this comedy of errors that is based on Greek mythology, fairy lore and pure theater. It also provided the enduring observation, “The course of true love never did run smooth.” 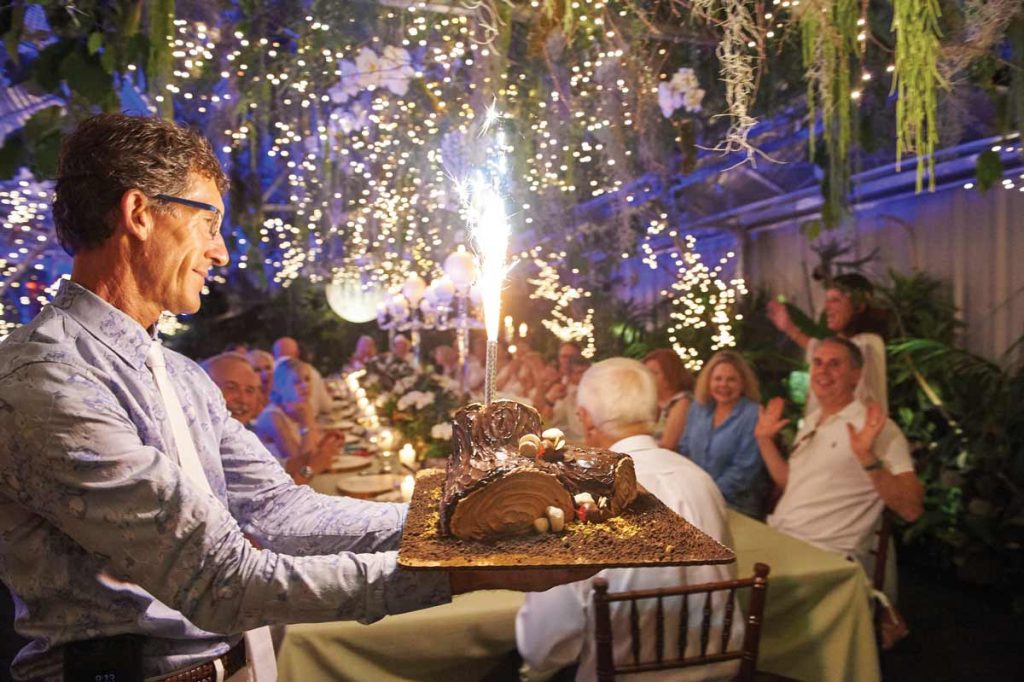 Hosting Your Own Summer Solstice Party

Summer is the perfect time to host a party and celebrate family, friends, food and the outdoors. Here are some tips from Tim and James to make your gathering party perfect. 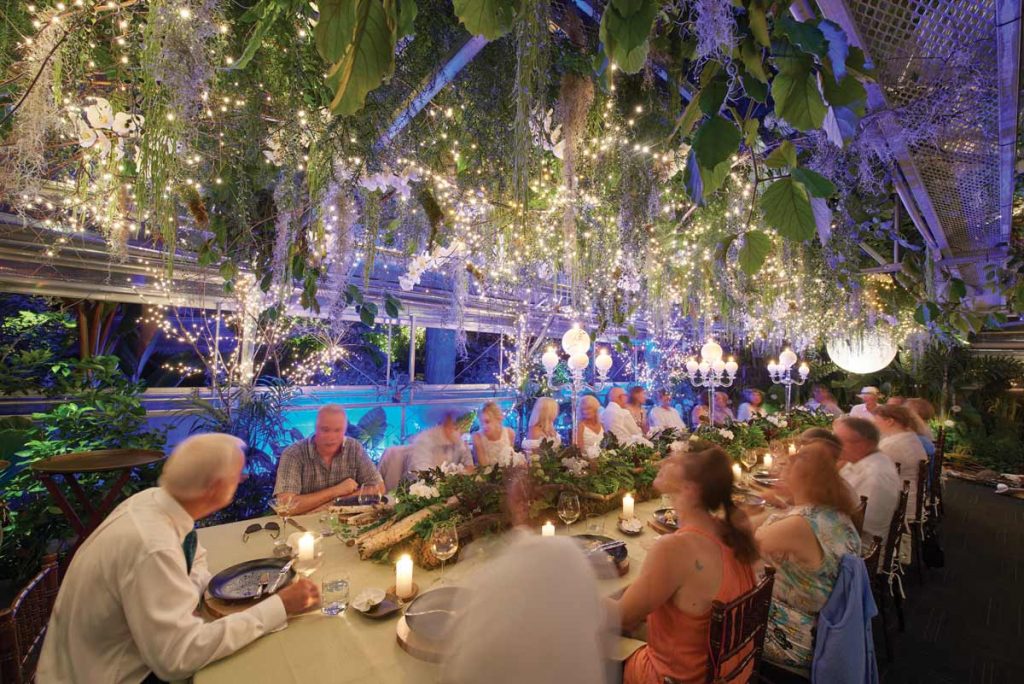 Guests couldn’t help but to take in the magical surroundings during dinner. 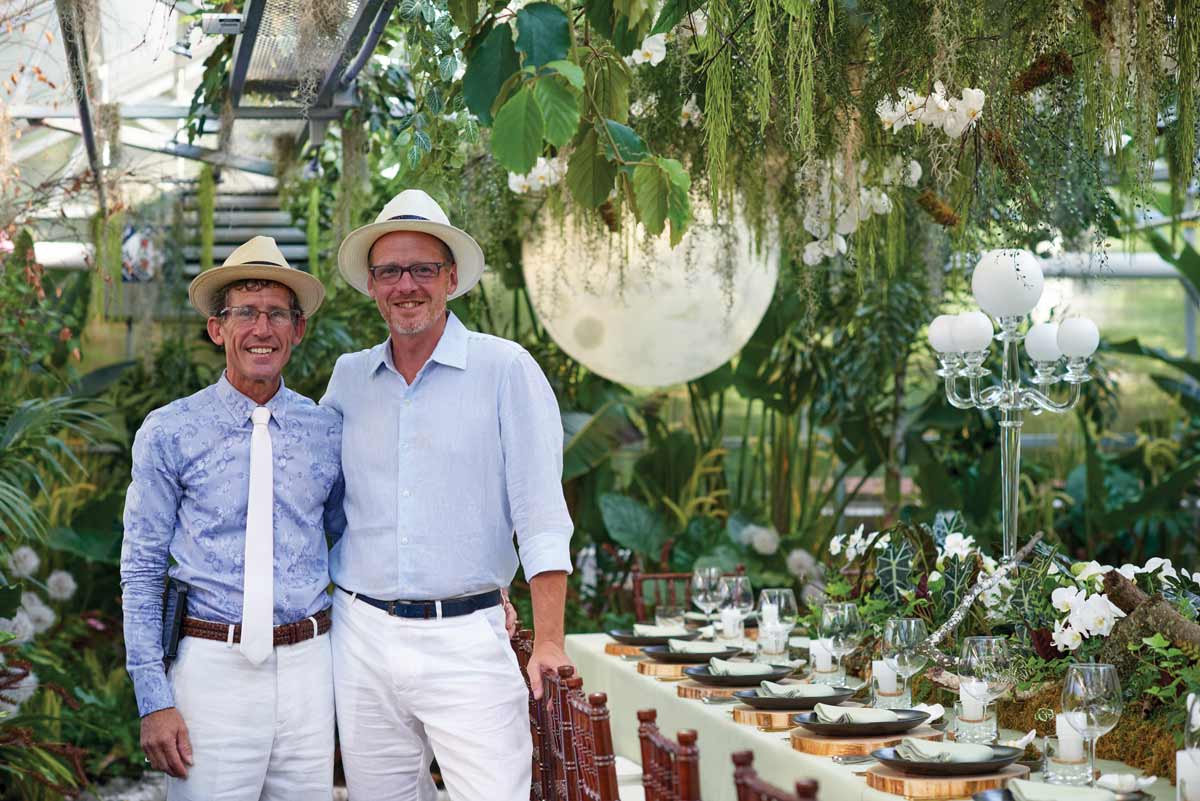