Hinkle’s Restaurant in Columbia has served customers for more than 124 years. Saved from the brink of closing by Don and Becky Murphy, the new version of this iconic landmark, which is now operated by Robin Ortman, John Sipe and Tom Davis, is a mix of old-fashioned charm and modern décor. 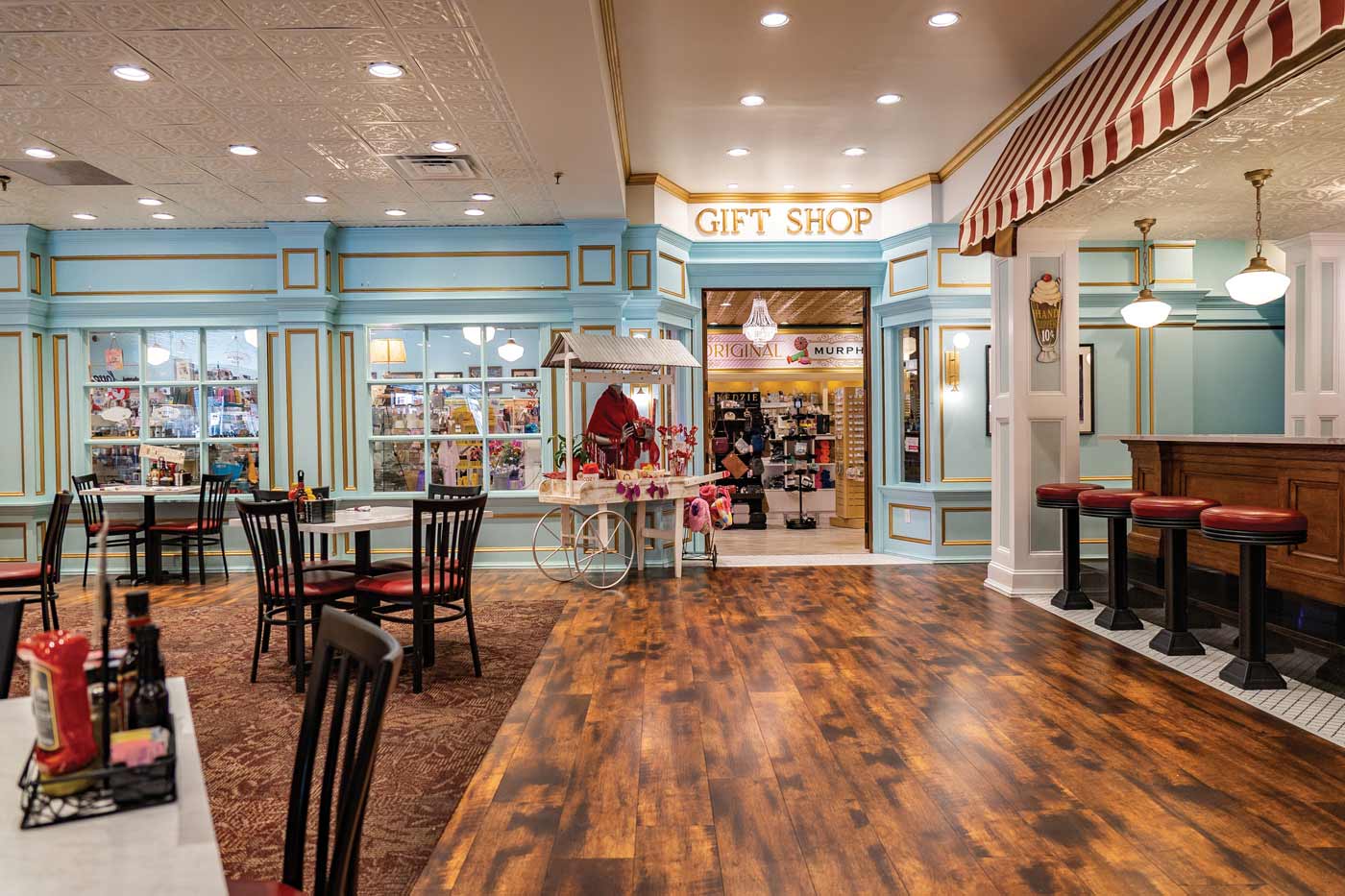 The remodeled restaurant features new floors, a pressed-tin-style ceiling, a variety of seating areas, a soda fountain, a private dining/meeting room and an expanded gift shop.

Founded by Samuel Hinkle in 1893, Hinkle’s became a family affair that continued through four generations. The building became home to a pharmacy, a restaurant and a gift shop. Until 1970, the basement of the building was home to the production of Doc Hinkle’s Easter Egg Dye. In October 2017, the tradition ended, when John Hinkle III announced that the business would be closing. Fans of the restaurant – the sort of place where “everybody knows your name” – lamented its demise.

It appeared to be an end of an era … until real estate developers Don and Becky Murphy announced they would be buying the business and remodeling the building. With the pharmacy no longer in operation, there was room to expand. The renovations included the addition/return of a soda fountain. 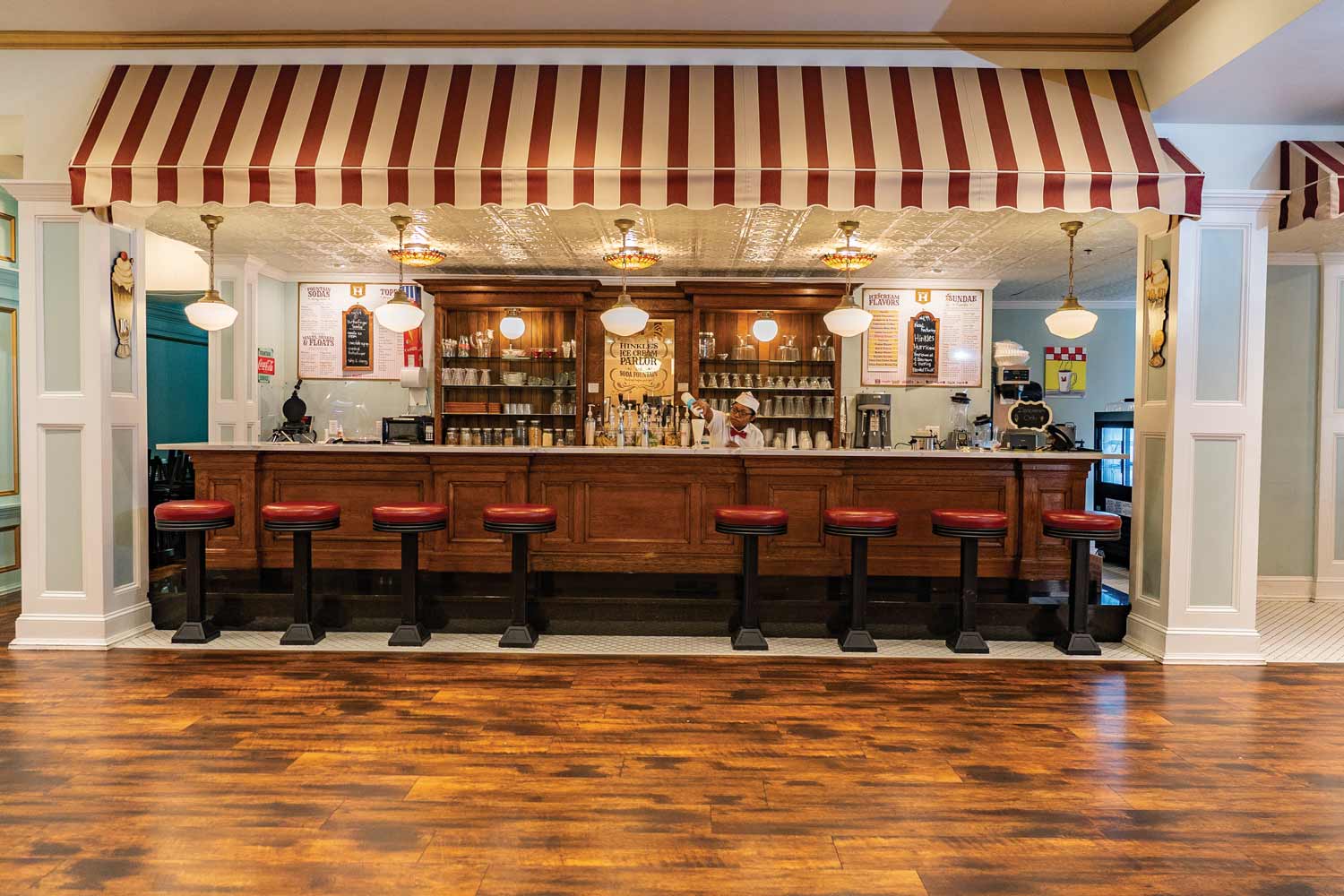 The remodel included the return of an old favorite – the soda fountain. Here, Kabrina Daniels puts the finishing touch on a vanilla malt.

While the restaurant retains its original charm, improvements such as doubling the kitchen size and installing new flooring, a counter, booths and a pressed tin-style ceiling, have given the interior a more modern look. Links to the past exist, as well. During renovations, boxes were found in the basement that contained historic photos of Hinkle’s and Columbia’s downtown. Some of those photos were framed and now hang on the walls of the restaurant.

With other projects to oversee, the Murphys turned Hinkle’s over to John Sipe, Tom Davis and Robin Ortman. The trio had worked at Hinkle’s for a number of years and have a combined management experience at the restaurant and other operations of over 70 years. 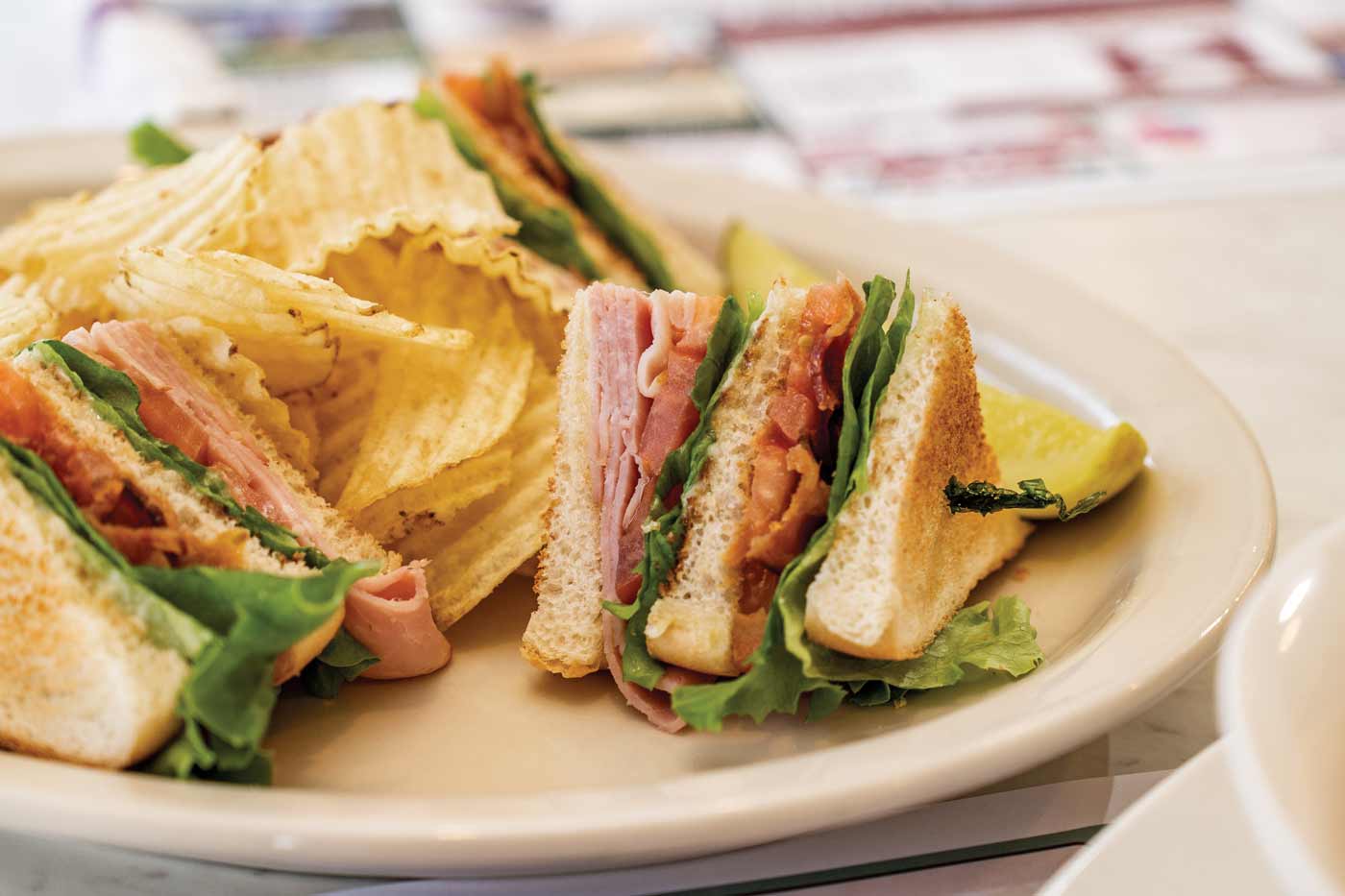 Hinkle’s now seats about 200 at tables, booths and a counter. “We went from a seating capacity of 80 to 200,” Robin notes. There’s also a small, private dining area that seats about 40 and is used for overflow dining on weekends, as well as for private meetings and events. Social distancing is also accommodated, as the number of tables in the area that offers a view of Locust Street has been reduced.

While the atmosphere is light, casual and relaxed, there’s a hint of nostalgia with an old-fashioned soda fountain complete with stools. “People really love the soda fountain. When we put it in, our ice cream sales increased dramatically,” Robin says, adding that it, too, provides a link to the past, as is evidenced by some historic pictures that depict John Hinkle Jr. and the ladies who worked at a soda fountain that was part of the restaurant in the 1940s and ’50s. 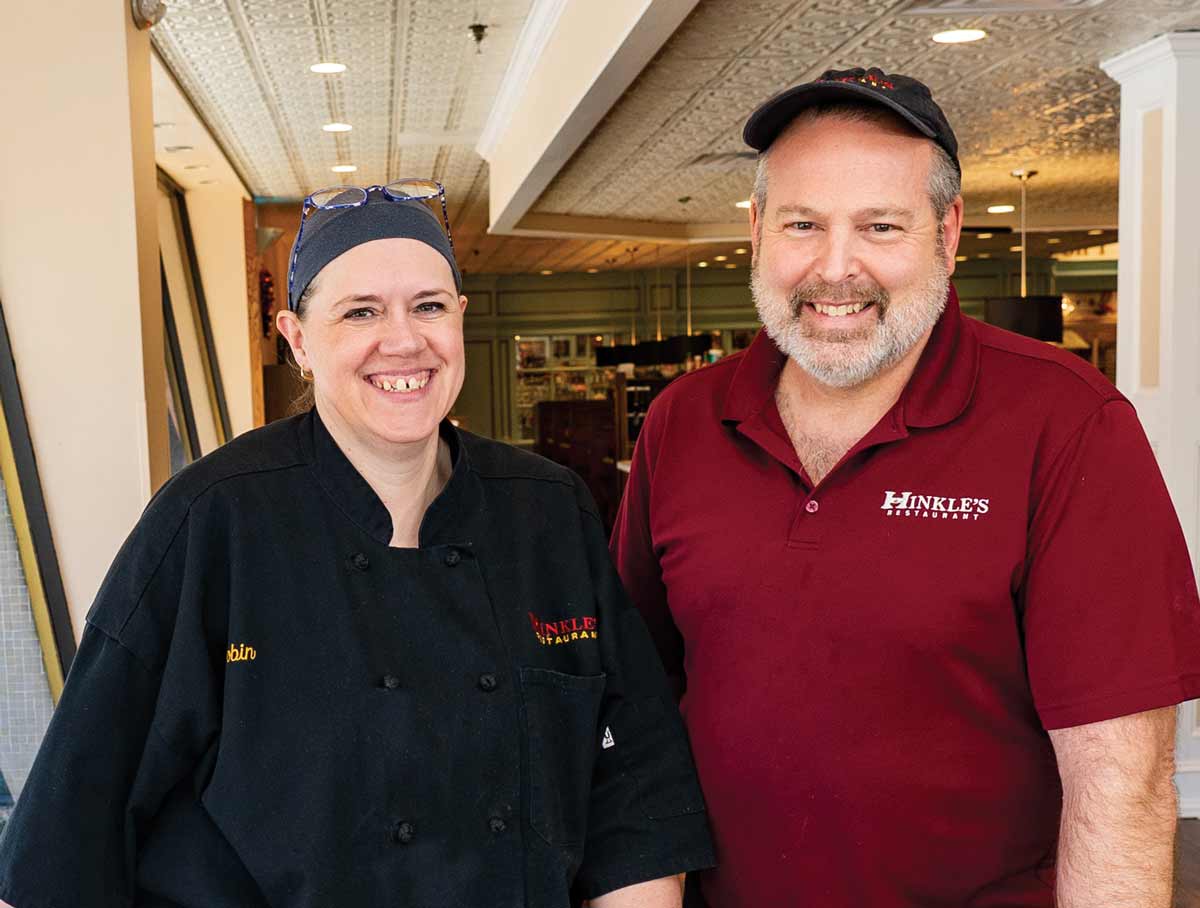 The new owners of Hinkle’s include Robin Ortman and John Sipe, as well as Tom Davis.

The dipping cabinet is a refurbished antique that came from Green’s Dairy, but Robin is not sure of the specific location. The back bar is also from an old soda fountain. Hand-dipped Turkey Hill ice cream is used to create soda fountain specialties such as sundaes, floats, shakes and malts. Old favorites such as cherry and vanilla Cokes and lime Rickey are also available.

There’s even an ice cream challenge. The Great Gatsby Challenge is composed of 20 scoops of ice cream, whipped cream, cherries and toppings. Customers can select up to five ice cream flavors and up to five toppings. The Great Gatsby can be shared among friends or consumed by a single customer. If a single customer consumes it within an hour, the $40 sundae is free of charge. “We’ve had several people complete the challenge. One person came prepared with his own spoons, and he ate the entire thing in 17 minutes,” Robin explains. “We were all amazed!” 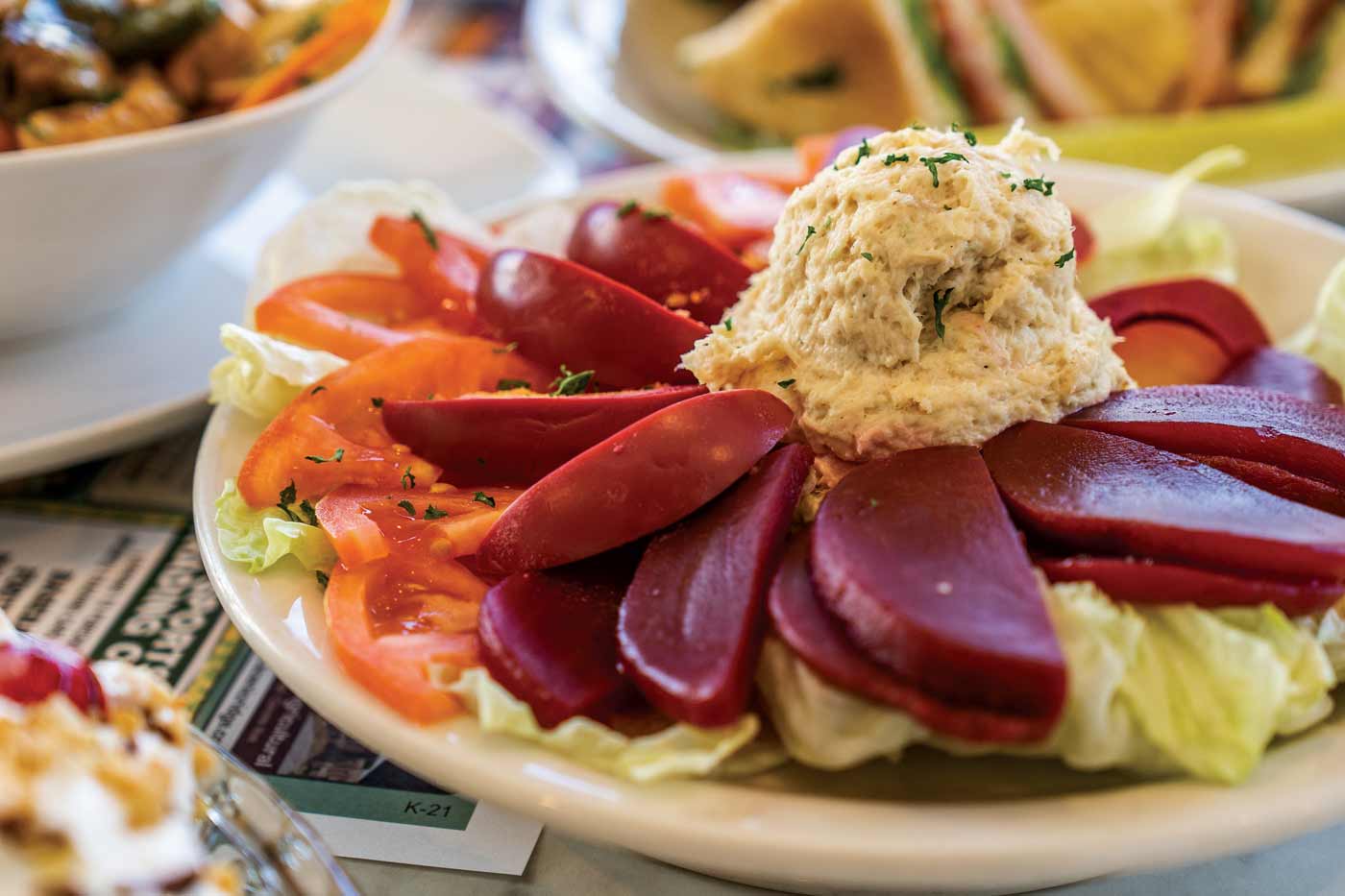 Breakfast, lunch and dinner are served, and the expansive menu features items prepared with fresh ingredients. Additionally, soups are made fresh daily. “We have the same menu that’s been in place for years,” Robin says. “We wanted to keep it the same so it would be familiar to our guests. We also have recipes for items that Hinkle’s is known for like chicken croquettes. Our chicken croquettes are made using the same recipe and in the same way as they have been for years.”

Another customer favorite is the old-fashioned shifter sandwich, which originated in Columbia and is a Hinkle’s staple. This ham, cheese, lettuce, tomato, sweet pickle and mayo sandwich was a favorite of Pennsylvania Railroad workers who operated the switch engines. Hinkle’s also offers a shifter salad and a shifter burger. 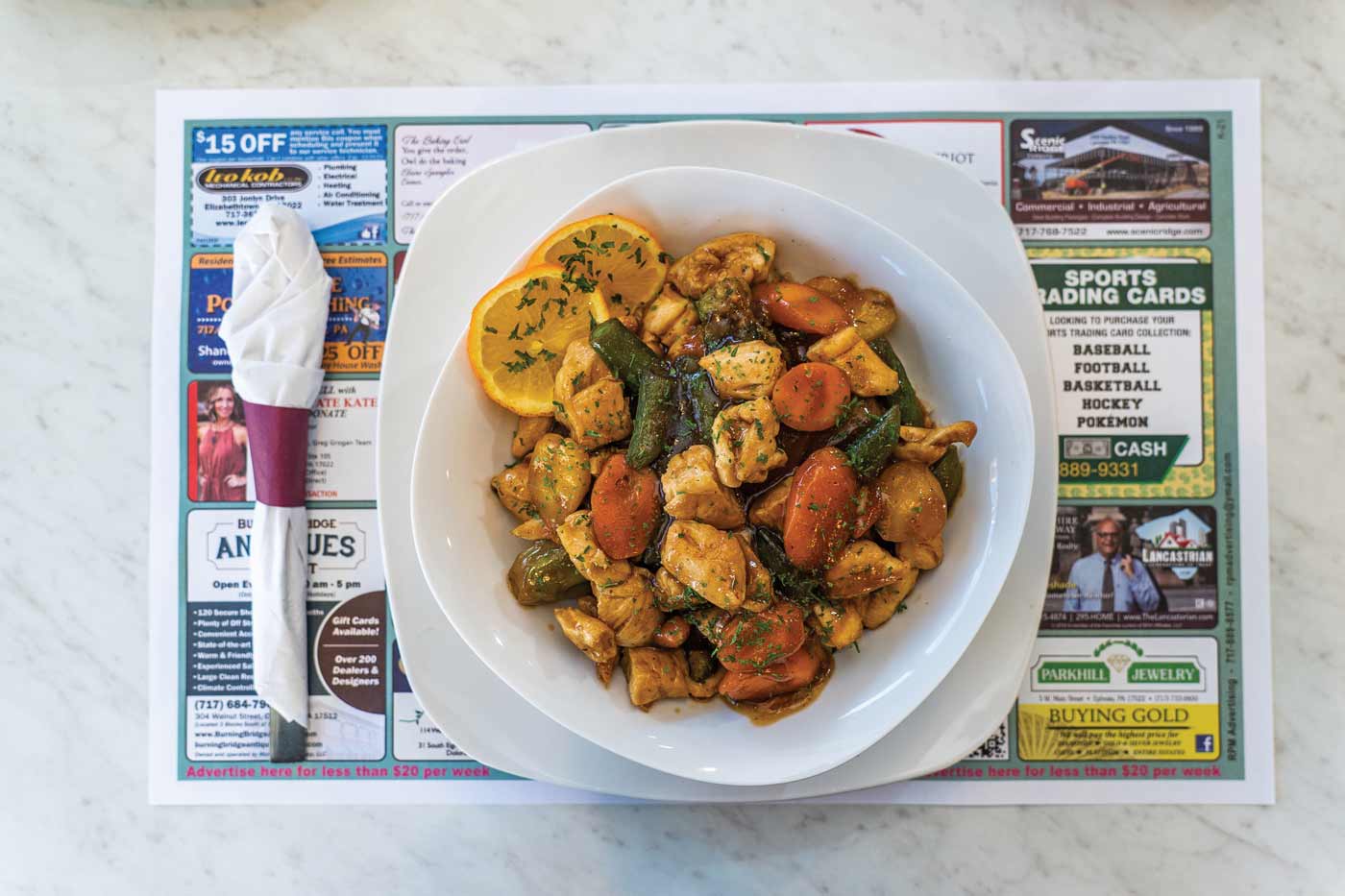 The menu is augmented by weekly specials. Robin reports that corned beef and cabbage and other Irish specialties will be featured this month in honor of St. Patrick’s Day.

In addition to familiar menu items, frequent diners are sure to see a number of familiar faces among the wait staff. “We have a number of long-time staff members. And, our staff has been great through the COVID-19 pandemic and the [resulting] shutdowns; they’ve really stuck by us, and we appreciate that. The staff is an important part of the dining experience here,” Robin stresses. 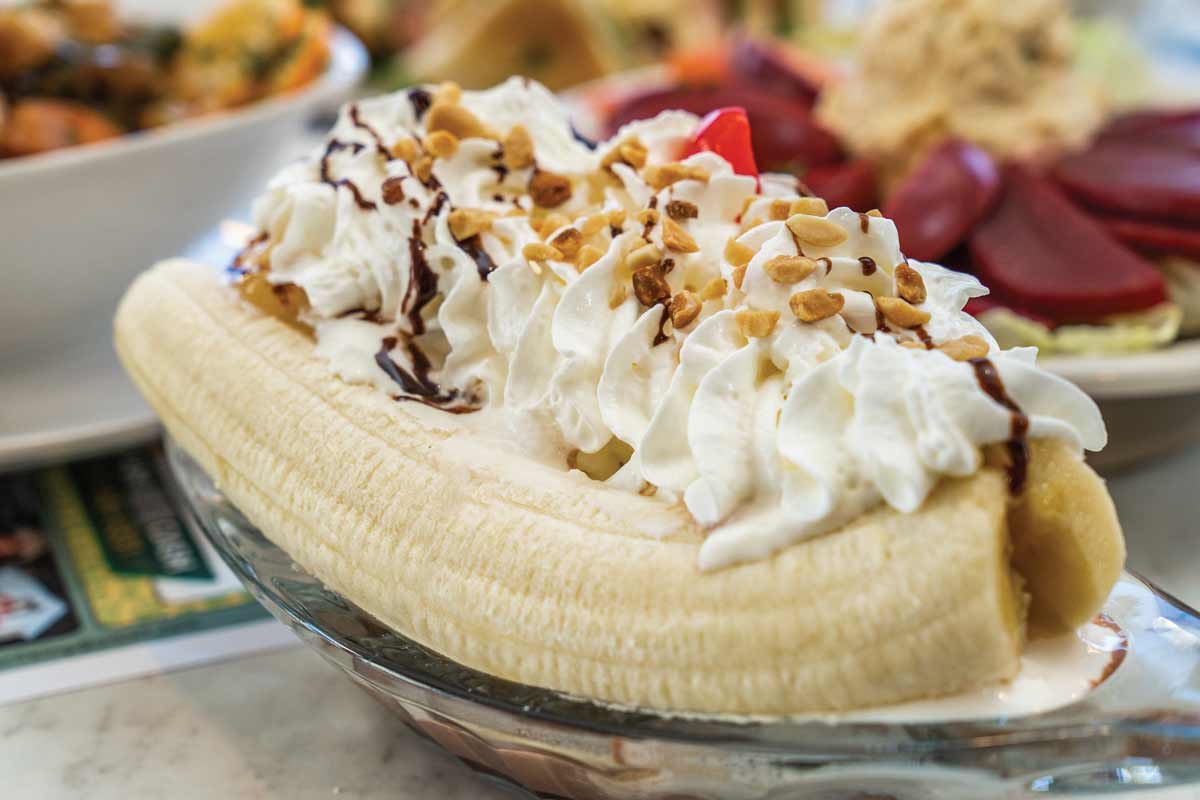 Hinkle’s Restaurant was also known for its gift shop, and that tradition continues with Murphy’s Mercantile, which is operated by the Murphys. Robin says there’s a wide selection of items available, ranging from old-fashioned candy to merchandise crafted by local vendors. “Hinkle’s was known for its selection of cards, and the Mercantile uses that same card vendor,” she notes. 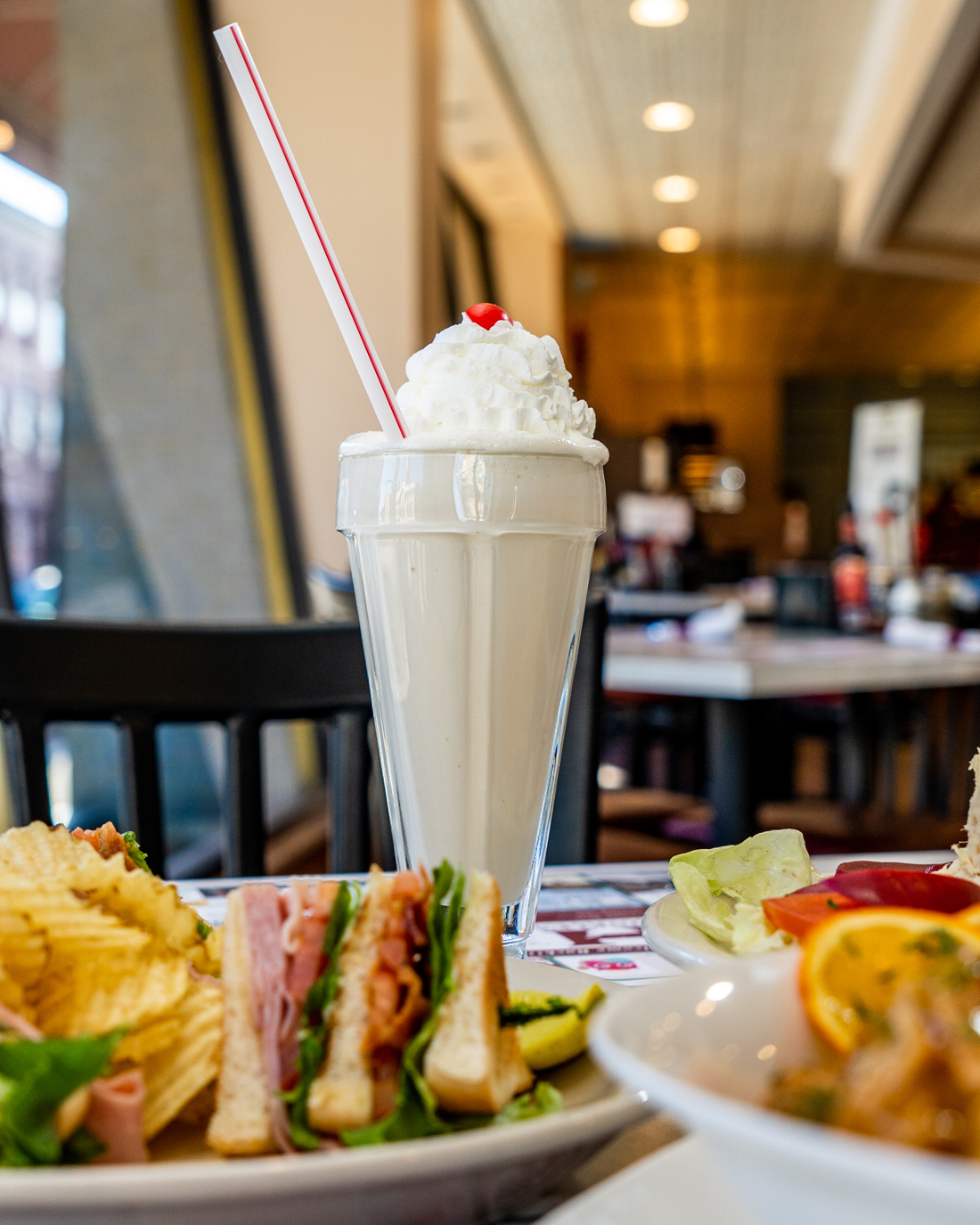 The remodel included the return of an old favorite – the soda fountain. Here, Kabrina Daniels puts the finishing touch on a vanilla malt.