Smokehouse BBQ and Brews offers a bit of the unexpected – barbecue in the heart of Pennsylvania Dutch Country. Located at Plain & Fancy Farm in Bird-in-Hand, the restaurant made its debut in April.

Housed in a portion of a barn-like structure that also features a gift shop and the iconic Plain & Fancy Farm Dining Room (family-style restaurant), Smokehouse BBQ and Brews offers “something different” for both visitors to the county and local diners.

The Plain & Fancy Farm opened in 1959. It takes its name from a 1950’s Broadway musical, Plain and Fancy, which depicts the Amish way of life. The main attraction was family-style dining featuring traditional Lancaster County meat and potatoes fare – a farm-to-table experience. Over the years, the business expanded to include lodging, buggy rides, a country store, area tours, the Amish Experience Theatre and the Amish Country Homestead.

“It was time to add something different. We have a lot of people who are returning guests, and while they enjoy traditional Lancaster County fare, they’re also seeking a dining alternative,” says General Manager Roxan Kahler. “We’re near Smoketown, so smoked meats seem like the perfect fit,” adds William Moshos, the farm’s director of marketing.

With the opening of the barbecue eatery, Plain & Fancy’s family-style restaurant shifted its focus to serving groups of 20 or more.

Smokehouse BBQ and Brews’ interior is spacious and visually engaging. A lofty ceiling, soaring stone fireplace and bright modern-style lighting are hallmarks of the dining area. Be sure to check out the unique artwork, which includes a stylized American flag and a hand-crafted metal mantel piece that’s backlit. Seating in the dining area features wooden tables, metal chairs and banquette seating along one wall.

Kathy Edwards, kitchen manager, explains that developing the menu involved a bit of trial and error. “We needed to learn about barbecue and smoking the meats,” she says.

Initially the restaurant operated with one smoker, but a second one was added over the summer. Edwards says that pork and brisket, each of which is prepared with a rub, are done low and slow, cooking overnight. Ribs and turkey are smoked for about four hours. Rubs are in-house creations, as are the sauces for barbecue menu items.

Many of the barbecue items are served without sauce, allowing guests to experiment with the selection of sauces that is available at each table. One of the sauces, ABQ, contains a favorite Lancaster County ingredient – apple butter. Kathy notes that this is the restaurant’s sweeter sauce. There’s also White Horse (a horseradish-based sauce), Memphis Heat, and The Smoke.

Mac & Cheese is made with four varieties of cheese (smoked Gouda, fontina, parmesan and cheddar). It’s available as an entrée (it’s grilled and drizzled with The Smoke sauce) or as a side.

House-made corn muffins are also on the menu.

If your party includes barbecue fans as well as those with a craving for traditional Pennsylvania Dutch fare, Smokehouse has a solution. One side of the menu features barbecue, while the other offers Lancaster County favorites such as chicken pot pie, meatloaf, fried chicken and roast beef.

As the name indicates, beer is part of Smokehouse’s menu (a liquor license was acquired for the hotel on the property). Beverages range from a root beer float to a beer float made with chocolate vanilla porter. There are also 12 craft beers on tap.

“We pride ourselves on offering an excellent dining experience. We want our guests to have so much fun they can’t wait to come back,” Roxan says. 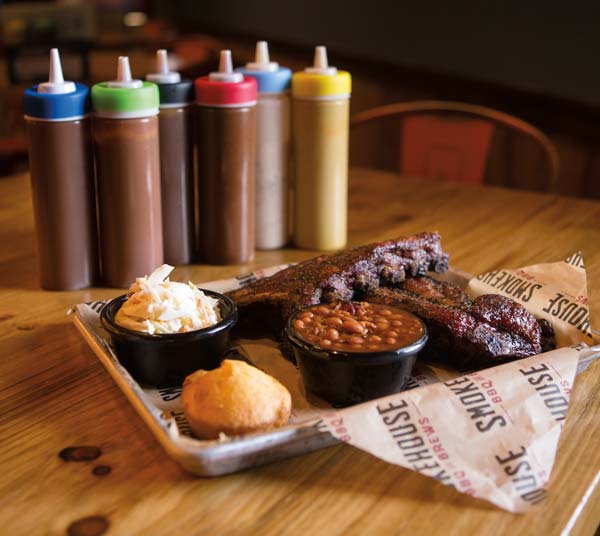