Christmas at the Elizabethtown public Library is special to kids and adults alike thanks to the Train Guys, who volunteer their efforts yearly to transform the basement of the library into a train-lover’s fantasy – decked out with all the “bells and whistles.”

Craig Coble and Eric Metzler are two of the Train Guys who help with the yearly Christmas project. The Train Guys, a group of about 20 men from the Elizabethtown area, combine their individual talents, as well as share their varied toy train collections and train accessories for the library display each year. These men all have one thing in common – a passion for toy trains and toy train collecting.

While all the Train Guys are close friends, Craig and Eric have something more in common. They admit to being “pre-natal” buddies. According to Craig, “Our dads were lifelong friends here in Elizabethtown, and after the war they both got married about the same time. Long story short, we hatched within a couple months of each other.” Because their fathers were close friends, their families were as well. Now both 69 and retired, their friendship continues today.

The two have also shared an interest in trains of all sizes since childhood. Their toy train collecting dates as far back as infancy. “I got my first toy train before I was 1 year old,” Eric says of the electric-style engine (a steamer with a tender connected to it).

Craig received one of his favorite trains at the age of 3. Because it once belonged to his father, “that train is the one I value most,” he shares.

it was only natural for Craig and Eric to get interested in trains when they were kids as it was the thing to do back then. The two also followed the path most kids took and attended college (Elizabethtown College) following high school graduation. For a time, trains took a back seat to books and girls.

Shortly after graduation, Eric asked Craig to go along with him to a local toy train shop to pick up an item he had his eye on. Craig recalls, “I went into that shop and all these train memories came flooding back, and within a week I returned and bought another engine.” He was hooked once again.

in 1970 they joined the Train Collectors Association (TCA) and have been participating members ever since. The TCA is a global organization whose national headquarters is located at The National Toy Train Museum in Strasburg. Here, you’ll find some of the finest collections of toy trains on display, along with major operating layouts in Standard, O, G, S and HO gauge. (Gauge denotes the width of the tracks.)

Craig and Eric are literally experts on anything railroad. From the real life trains we see on the rails today, to the trains of yesteryear, to the smallest toy trains, they have all the facts. They both are serious collectors. While most collectors like to keep their finds pristine and in the original packaging, Craig and Eric heartily disagree with this. Instead, they want others to see, learn and enjoy from what they have to share. Eric likes to say, “I don’t run boxes on my tracks.”

Craig and Eric began sharing  their expertise  and trains in the 70s, when they would set up toy train rooms for a number of local Christmas church bazaars. Years later, they went on to lend their time, trains and talent to help with a fundraiser for the new and soon-to-be relocated Elizabethtown Public Library.

After the new library was completed, Craig and Eric continued to help raise money by setting up a train room each Christmas. Gradually, other fellow toy train enthusiasts became involved.

Since all the guys involved in the yearly fundraiser had to frequently pass through the library lobby in the weeks before Christmas, the library staff became accustomed to seeing them. However, the staff often got confused over who was who since there were so many of them. Finally, at one point, staff members just started referring to them as “the train guys,” and the name stuck.

The annual fundraiser has gained in popularity and size over the years. Last year more than 4,000 people visited the display.

Planning for the fundraiser begins in early fall, with the construction phase getting underway in late October. Each year the Train Guys strive to make the display different from the last. There are 50 interactive buttons around the edge of the tables that operate the display.

The fundraiser will open Thursday, December 1. It is open to the public throughout December as follows: Tuesdays and Thursdays, 6-8 p.m., and Saturdays, 10 a.m.-2 p.m. 10 S. Market St., Elizabethtown. 367-7467 or etownpubliclibrary.org. 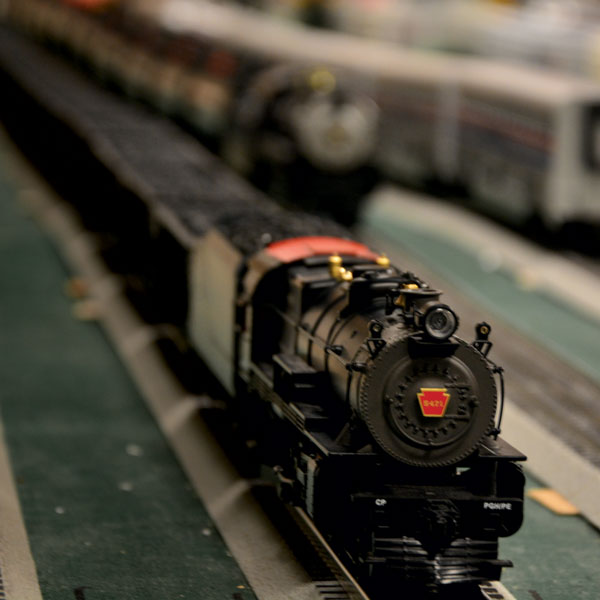