Peggy is a former teacher turned Realtor (she’s with Berkshire Hathaway HomeServices). Her favorite part of the job is staging homes. That talent carries over to her parties, which always have themes. In the summer of 2013, it occurred to Peggy that she had factions of “wise women” relationships that were based on family, friends and work. To her dismay, those factions rarely came together. Peggy aimed to remedy that through a party. With Halloween approaching, she devised a Good Witch theme with Wizard of Oz connotations: her “witch and famous” guests would be arriving in Lancaster from the North, South, East and West. Invitations would be issued to a childhood friend in Connecticut, another in Tennessee, her daughter Tanya in Colorado, and family and friends in the Mid-Atlantic region who trace their relationships to Peggy by way of high school (Lancaster Catholic), teaching (30 years with the School District of Lancaster) and real estate (it was Peggy’s niece, Anne Lusk, who encouraged her to consider real estate as a new career). The invitation instructed the 30-plus potential guests to wear witch hats. “Everyone got into the spirit of the party and arrived not only with hats, but many wore costumes or dressed in black,” Peggy reports. “That’s the whole point of having a theme: When you dress for a theme it provides you with the opportunity to become someone else. I like all-girl parties, too. It allows us to let our hair down.” 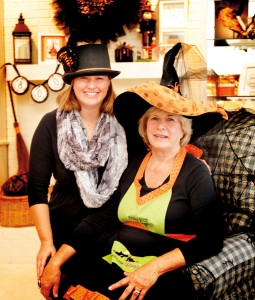 Peggy and her daughter, Tanya

In decorating the house for the party, Peggy’s mind spun a tornado of ideas. She first pilfered her home-staging supplies and then hit the garage-sale circuit. Her path of creativity also passed through favorite haunts such as HomeGoods, the Christmas Tree Shops, A.C. Moore and Michaels. “You don’t have to spend a lot of money on decorations,” she professes, alluding to the fact that sparkle is the definitive factor. She also went online, where she perused Pinterest. “I love that site,” she proclaims. “I have almost 50 boards of my own. It’s a wonderful source of ideas.” She also studied a how-to wreath-making tutorial on YouTube that explained the intricacies of working with deco mesh, the new material that’s being used to create wreaths, swags and other decorations. “They’re not hard to make, it’s just tedious,” Peggy notes. She also found a myriad of Halloween-related art and clever sayings online, and created artwork that filled every picture frame in her house. “I made something nearly every night,” Peggy recalls. “I decorated the house over the course of a month. I encouraged my husband to go to one of his favorite places for that weekend – Las Vegas.” 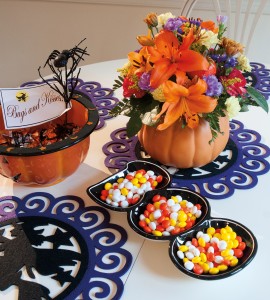 Pinterest provided a wealth of ideas for artwork, clever sayings (such as the “Bugs and Kisses” sign in a candy bowl) and décor. Peggy found the placemats at the Christmas Tree Shops on Route 30

Peggy also worked with floral designer Brian Horn to create the exterior décor, as well as floral designs for the various rooms. Craig Williams of Pondtopia freshened up the landscape and added fall plantings to the patio area. He in turn recruited Chris Abel to create fall-themed container gardens for the outdoor-living areas. When Peggy picked Tanya up at the airport in Philadelphia, they took the long way home and stopped at farm stands along the way to buy pumpkins and other party needs.

Mother and daughter then spent the next several days devising games. “Each room had a game,” Peggy points out. For example, her office was home to a game Tanya created: “Pin the Wart on the Witch,” which featured an oversized photo of Peggy in witch regalia. The game results were recorded and viewed later in the evening. Guests were also challenged to guess how much candy filled various containers, as well as the weight of a pumpkin. Another game challenged guests to view pictures of the cross-sections of candy bars and supply their names. The grand finale consisted of a Halloween trivia contest. Teams were captained by the witches of the North, South, East and West. Teams scored candy bars for each correctly answered question and the team with the most candy bars won the grand prize.

Peggy and tanya stayed up all night readying the house for the party, which was held on October 26. When guests arrived, they were greeted by photographer Tom Young, who took individual photos and a group shot of the guests (they would later receive commemorative photos as a “thank you” from their hostess). Peggy had accessories such as rings, boas and gloves on hand for the girls to wear for their photos. 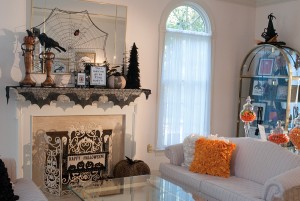 The fireplace in the living room was fully decorated for the occasion. The seasonal-hued pillows came from Peggy’s stash of staging supplies. The containers of candy accounted for a guessing game that Peggy and Tanya devised. All the picture frames in the house were changed out to reflect the party’s Halloween theme.

Then, it was time for the games and most importantly, the food and drinks. Cocktails and hors d’oeuvres from Ray Hottenstein of the Greenfield Restaurant & Bar were followed by the evening’s entrée that was provided by fellow Realtor Ed Diller of Gypsy Kitchen. The dining room was devoted to the “Love at First Bite” dessert bar, which featured confections made by guests, as well as W-shaped cookies made by Tracey Reichert.

Ah, but the party wasn’t over when the clock struck 12. On Sunday morning, guests were invited to accompany Peggy and her family to Buckley’s Tavern in Delaware (near Winterthur), which is owned by another niece, Mary Dupont. Every Sunday, the tavern hosts Pajama Brunch, which rewards patrons with a half-price meal if they arrive in their pajamas. “About 15 of us went,” Peggy reports.

Since last year’s Halloween party, Peggy hosted a birthday party for her sister Nancy, which employed a Fancy Nancy theme (everyone wore tiaras and boas). As you might guess, Peggy is devising plans for her next party. “It will be held in the spring,” she shares. It will be an anniversary party of sorts: the Walls will mark 25 years of owning their Manheim Township home. “It’s going to have a pink theme,” Peggy announces. “I just love pink.” 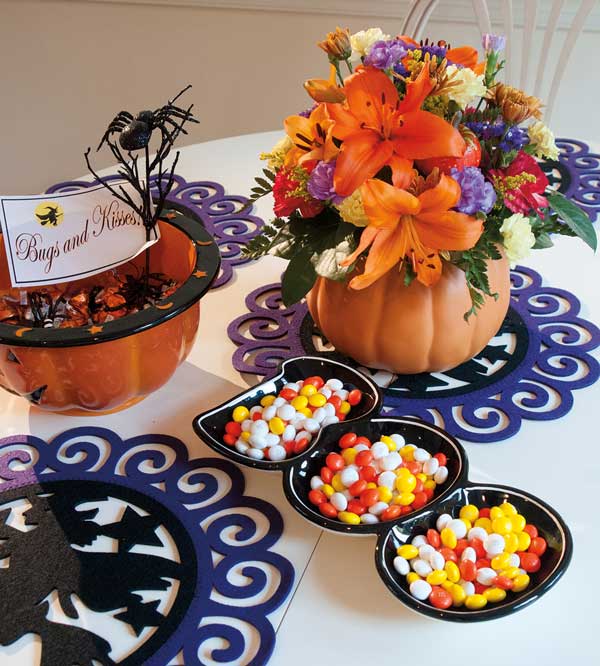