Loxley’s is known for its Olde English feel that extends to both its indoor and outdoor dining venues. The casual, relaxed atmosphere that the treehouse-like outdoor venue provides attracts a diverse clientele.

The restaurant, which is located at the Heritage Hotel in Lancaster (Centerville), opened in July 2009. It’s owned by Heritage Hospitality, which is also the developer of Heritage Hills Golf Course and Resort in York.

Lancaster’s Heritage Hotel originally opened in 1970 as the Sherwood Knoll. Bill Holder, restaurant and group sales manager, who has worked at the facility since 1989, says at that time, the hotel was home to the county’s first theme restaurant. He explains that Loxley’s name and Olde English theme serve as nods to the facility’s heritage.

The exterior entrance to Loxley’s sets the stage – the treehouse-like outdoor dining area has great curb appeal, and guests enter over a bridge that spans a koi pond. “People really love the koi. Watching them is a great stress-reliever,” Bill says with a smile.

Loxley’s indoor areas have names such as the Sherwood Bar, Ballad’s Buffet and the Outlaw Chamber (a private dining room). Stone walls, floors that have the look of aged wood (in some areas) and wood accents (including tables and chairs) add to the warm, inviting ambiance.

An indoor/outdoor bar carries the same vibe but also features TVs around the bar area. “It’s a great area. It had been an outdoor bar, and we enclosed it about two years ago,” Bill explains. “Now our guests can enjoy it nearly year-round,” adding that it’s only closed “on really cold days.”

The outdoor dining area is the feather in Loxley’s cap. This unique two-story area has the appearance of a large, open treehouse. Surrounded by a low stone wall and landscaping, the courtyard area boasts a tree growing in its center and extending upward into a bar area on the second level. “Outdoor dining has been extremely popular. When we first opened, we took reservations for tables, but we changed our policy a few years ago and no longer take reservations,” he says.

Loxley’s serves breakfast, lunch and dinner. The same menu that’s served indoors is available outside (however, the outdoor dining venue is not open for breakfast). A plated Sunday brunch menu made its debut for Mother’s Day.

The menus crafted by Executive Chef Joshua Hilt feature a wide array of items as well as daily chef’s specials. “We have a bit of something for everyone on the menu – steaks, pizzas, burgers, seafood, etc. – and about 90% of our food is made from scratch using as many seasonal, locally sourced ingredients as we can,” Bill stresses.

He points to the fried cheese curds as an example. The cheese curds are from York Valley Cheese Company, but they’re breaded in-house and then flash fried. Bread is delivered fresh from Philadelphia daily, and a local baker supplies dessert items that change frequently. The menu itself is updated twice a year.

An array of cocktails complements the menu. The indoor/outdoor bar also features a rotating selection of 30 craft beers from local and regional brewers as well as brewers from throughout the country. “Although the taps are located in that area, our craft beer can be ordered throughout the restaurant,” Bill notes.

Loxley’s also sponsors a special community outreach program called The Legend Continues. Bill explains that, generally, the restaurant supports three charities each month on a year-round basis. Guests select which of the featured charities they would like to support and 5% of their food bill is donated to the organization. “It’s our way to give back to the community that we serve,” Bill says.

Loxley’s is located at the Heritage Hotel, 500 Centerville Rd., Lancaster. For hours and other information, call 717-898-2431 or visit LoxleysLancaster.com or their Facebook page. 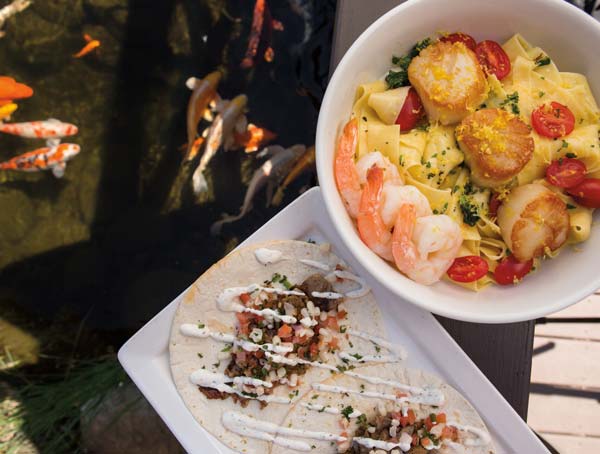