Peggy Walls’ annual Halloween party took on a special significance last year. In December 2014, she was diagnosed with breast cancer, which prompted Peggy to accent the party’s standard black and orange color scheme with shades of pink.

Peggy is one busy lady. In addition to being a realtor who stages many of the homes she lists, planning parties is her second love. And, they’re not cheese-and-crackers affairs – Peggy goes all out to create themes for her parties.

When Peggy turned 70 in 2014, her husband, Bob, “suggested” it might be an opportune time to undergo a complete physical. Peggy sheepishly admits she is not one to proactively visit the doctor. But, she took Bob’s advice and scheduled the physical early in December (when real estate slows somewhat).

“My last mammogram was in 2009,” she says of skipping the all-important test for breast cancer for five years. “Besides, I thought when you got to be my age, it was not all that necessary.” The results of her 2014 mammogram provided some unsettling news: a small lump was detected, which proved to be cancerous. “I was in shock,” she exclaims. A doctor she didn’t know (hers was on vacation) delivered the news. “I was totally wiped out,” she recalls. “All I could think about is it’s Christmas and I’m being told I have cancer.” (Now she wonders if maybe she had undergone regular mammograms, the cancer might have been detected earlier.)

Her next stop was Penn State Hershey. “The first person I met with was Dr. J. Stanley Smith,” she continues. “My blood pressure was high, but he calmed me down by spending 2-1/2 hours with me, going over my options.” Peggy’s big question was why her. “There was no history of breast cancer in my family,” she reports.

Peggy’s game plan – she was given Stage 1 status – started with a lumpectomy. “They analyzed four lymph nodes,” she explains. Two tested positive, two tested negative. From there, Peggy was enrolled in a clinical study. The focus of her study group was a test that had been developed to analyze a patient’s need for chemotherapy. As Peggy explains, tissue is sent to a lab in California and, based on a rating between 1 and 100, patients are assigned a score that estimates their chances of cancer reoccurring. The lower the number, the better. “Mine came in at 14, so we decided to forego chemo,” Peggy says, noting she and her daughter, Tanya, had researched the side effects of chemo and hoped it would not be necessary.

However, radiation treatments were a part of her regimen. For that segment of her care, she utilized the services of the Ann Barshinger Cancer Center in Lancaster. “I had 33 treatments,” Peggy says. “The staff there was wonderful.”

In August of this year, Peggy celebrated her first anniversary of being declared cancer-free.

Cancer made peggy aware of the power friends and family wield when a person receives that diagnosis. “Hearing the ‘C’ word for the first time is totally unnerving,” she attests. “Your mind can be your own worst enemy, so you really do need a support group.” Peggy credits Bob and Tanya for being her rocks. “And, my sisters helped me so much,” she says. Friends and co-workers rallied around Peggy, as well. “I was surprised to learn that some of my friends had never had a mammogram in their lives,” she shares. As you can imagine, Peggy’s plight inspired her acquaintances to schedule their own mammograms.

She also became involved in the fight against breast cancer by becoming a volunteer with the American Cancer Society. Last fall she took part in the annual Making Strides Against Breast Cancer, a 5K fundraising walk that is held on City Island in Harrisburg. She will be supporting the walk again this year, along with a busload of friends and family – AKA The Perfectly Pink Team – who will be donning pink wigs and sunglasses for the event. “The first thing we’re going to do when we get to Harrisburg is have our picture taken on the steps of the capitol building,” she says.

Peggy will also be holding a benefit for the American Cancer Society on November 5 by “staging” a yard sale. However, this will be no ordinary yard sale. She will be emptying her storage sheds and selling staging items and holiday decorations she has amassed over the years. “I’ve been at this for 15 years, so I have a lot stashed away,” she notes. (For address, hours, etc., email pwalls@supernet.com.)

For Peggy, staging and holiday décor go hand in hand. “I’ve been known to stage a house for Christmas,” she says of past properties she has sold. And, she’s a fan of the “Pink Christmas” movement that has become a trend in holiday decorating. “I do my kitchen all in pink for the holidays,” she explains, adding, “I’ve always loved pink, but now it has a special meaning.”

Indeed, the pink ribbon that is associated with breast cancer awareness represents more than a girlie color. In the world of color psychology, pink represents compassion, nurturing and love. Pink is the color of hope and represents a state of calm. And, over the centuries, pink has been used to describe optimal health, i.e. “in the pink” and “everything’s rosy.”

Halloween is one of Peggy’s favorite holidays, and last year she decided to incorporate breast cancer awareness into her annual women-only party by instructing her guests to add a touch of pink to their witch costumes. As with previous parties, this one followed the same format – food, drinks, décor, flowers, games – only all the elements had a pink theme. “One of the games challenged teams to come up with as many names as they could think of for boobs,” Peggy recalls. “The winning team had 23!”

For this year’s party, pink will again be the theme, and Peggy is instructing her guests to wear the color. She’s also challenging them to get creative and arrive with bras they’ve decorated (prizes will be awarded).

As always, floral designer Brian Horn is on call to carry out the theme from a floral perspective. Outdoors, Chris Abel will again work her magic. “Brian has reserved the entire week for the party,” Peggy reports.

The purpose of this 5K fundraising walk is to “unite communities to support each other, honor those affected by the disease, and raise awareness and funds to create a world free from the pain and suffering of breast cancer.” Registration begins at 7:30 a.m. The walk starts at 8:30 a.m. For more information, visit makingstrideswalk.org/Harrisburg. 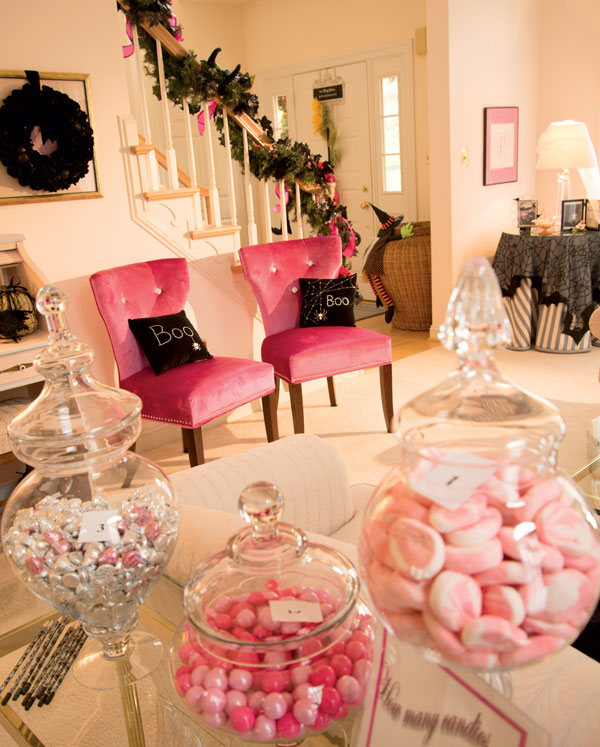 Peggy’s living room took on a decided pink hue when she spied these chairs at a local store and couldn’t resist buying them. The pink-hued candy replaced the typical Halloween candy that fills her candy jars.