What do you do with a nondescript backyard? A bamboo plant was the inspiration for Eric and Ann Tapman’s laid-back, outdoor-living area.

Twenty years ago the Tapmans returned to the area after living in Atlanta. “We had a new house down there,” Eric explains, “so this time we really wanted an older house.” Their search took them to Hummelstown, where they found just what they were looking for. Well, sort of. The house, which dates to the early 1900s, had been divided into two apartments, while the nice-sized backyard consisted of nothing more than a large hemlock tree, an expanse of grass and an unattractive chain-linked fence. Still, they liked the property’s potential, as well as the fact that it was within easy walking distance of the town’s restaurants and shops. 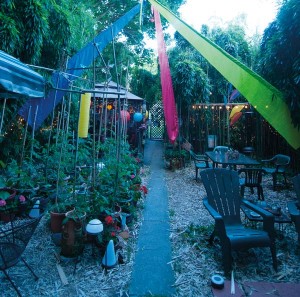 The center of the backyard is dedicated to growing vegetables and herbs in containers. The colorful flags are a memento of a vacation in California.

Two years ago the house celebrated its 100th birthday, and the Tapmans honored that milestone by hosting a party in their backyard. Its former owners would not have recognized the space. Towering bamboo trees and Tiki art now distinguish the rear of the property. “We never had a grand plan for creating this,” Eric explains. “It grew out of an idea; the more we did, the more it came to be.”

Eric, a computer programmer who commutes to Lancaster by day, says that transforming the garden has allowed him to be “creative by night,” pointing out that the bamboo has lent itself to a myriad of projects. For example, trees he has taken down have been used to craft architectural elements for container gardens and to create stair rails and other items in the backyard. In the basement, bamboo is the basis of an indoor Tiki bar and lounge that Eric also designed and built. 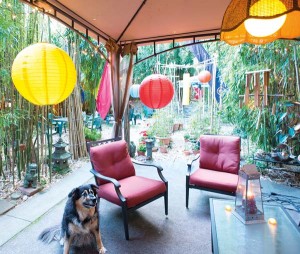 The idea of an outdoor Tiki lounge took root 12 years ago when the Tapmans attended Hummelstown’s annual art show. One of the vendors was selling bamboo plants. Eric bought four or five and planted them in the backyard. He liked the effect they created and added to it by transplanting bamboo trees he found growing on acreage where a hotel was being built. A tropical forest soon defined the backyard.

Eric knows what you’re probably thinking: Is the man crazy? After all, most people dismiss bamboo as a landscaping plant and perceive it as being invasive. Eric, on the other hand, holds the opinion that bamboo is a misunderstood plant and says you can develop a working relationship with it. “If you understand the plant, you can control it,” he notes. “Taming it is essential.”

The Skinny on Bamboo

As Eric can attest, bamboo is one of the fastest-growing plants in the world, due in part to its unique rhizome system that essentially utilizes the energy from existing plants to create new ones, thus resulting in colonies of trees. Certain species can grow as much as 3 feet (or more) over the course of a day.

While Americans may consider bamboo to be taboo, this multi-tasking plant is essential to Southeast Asia, where it is used for building purposes, as a raw product and as a food source. Size-wise it ranges from dwarf to more than 75 feet in height. Color varies from species to species, and cold-hardy varieties are available. In warm-weather climates, leaves remain green over the winter, providing an alternative to evergreens. Even in Central PA, when winter temperatures are on the warm side, the leaves will remain green. However, according to Eric, the last three winters “have been tough” on the plants.

Bamboo begins life in a rather fragile state as the shoots, which grow into trees in approximately 60 days, are easy to remove (once they are extricated, the canes will not grow). Other control methods include root pruning and erecting physical barriers. In North America, where more than 200 species can be grown, bamboo is used in the landscape to provide winter interest, control erosion, stabilize embankments and provide privacy.

That begins in the spring when the plants push shoots via an extensive rhizome system. According to Eric, if you remove the shoots, you can control what grows and where it grows. He is always vigilant, making sure the shoots don’t compromise neighboring properties by removing them. He also diligently mows along the property lines in order to keep any wayward shoots from growing. 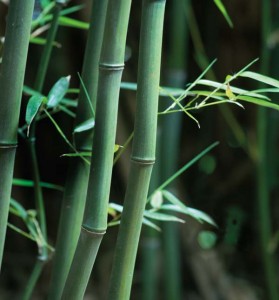 Eric professes that if you have an understanding of bamboo, it’s relatively easy to tame and control. The process begins in the spring, when new shoots emerge.

The fact that bamboo can be controlled enabled Eric to design “rooms” within the backyard. “The first room created itself,” he says of the various sitting areas that are located along the main walkway that begins in the upper yard, continues through a garden (in which tomatoes, herbs and peppers grow in containers), and ends at the bar and tented lounge area at the rear of the property. “We view the backyard as an extension of the house. In the summer we’re out here constantly,” Eric notes. “It’s like being on vacation; you walk outside and you can imagine yourself being in Hawaii or anywhere in Southeast Asia.” Unsuspecting first-time guests are usually speechless. “It’s interesting to see their reactions,” says Eric.

The interest in Tiki dates back to Eric’s childhood. “My parents were really into Tiki art and bought a lot of things,” he recalls. When they downsized, Eric “inherited” the collectibles. “I like Asian art, too,” he remarks. And, whether they’re visiting their daughter Katie in Philadelphia or vacationing in California, Eric and Ann are always on the lookout for garden art and accessories. Friends also arrive bearing gifts.

Another of Eric’s projects involved powering up the backyard. “Lighting is important,” he says. “It provides the garden with a whole different vibe at night.” Timers bring everything from spotlights to twinkle lights to life as nightfall sets in. The garden is also wired for sound: Music – courtesy of Internet radio – wafts through the trees and enlivens the bar and lounge area. To set the mood, Eric even recorded the sounds of moving water and warbling birds.

It’s not only back, it’s hotter than ever! Even the upscale Frontgate catalogue is touting the look (albeit a more refined look) for Summer 2015. Tiki, of course, takes its inspiration from the South Pacific; according to Polynesian mythology, Tiki was the first man to be created. Homage was paid to him through distinctive wooden sculptures that in time took the shapes of gods and other spirits.

Tiki ultimately inspired a South Pacific lifestyle that reached the mainland in the 1930s. Restaurants touting South Pacific-inspired décor, cuisine and beverages became all the rage, with Don the Beachcomber setting the tone in Hollywood and Trader Vic’s becoming a worldwide phenomenon. The 1939 World’s Fair, which was held in California, celebrated all-things Tiki.

Tiki fever was further fueled following World War II. Soldiers returning from service in the South Pacific arrived home with Tiki souvenirs that proved to be very popular in the heartland. When Hawaii achieved statehood on August 21, 1959, interest in the South Pacific only grew. Hollywood also came calling: Mutiny on the Bounty was filmed in and around Tahiti, while Elvis Presley filmed three movies in Hawaii.

By the 60s, Tiki-inspired bars and restaurants could be found in every town in America. Pu Pu platters and tropical drinks dominated menus. Rattan furniture and accessories defined home décor.

The mid-70s saw the rise of disco, prompting Tiki to become passé. But, it didn’t go away altogether. The lifestyle had its proponents in Tommy Bahama and Jimmy Buffett. And, all those souvenirs have become highly collectible, leading to an all new fervor for the Tiki lifestyle. 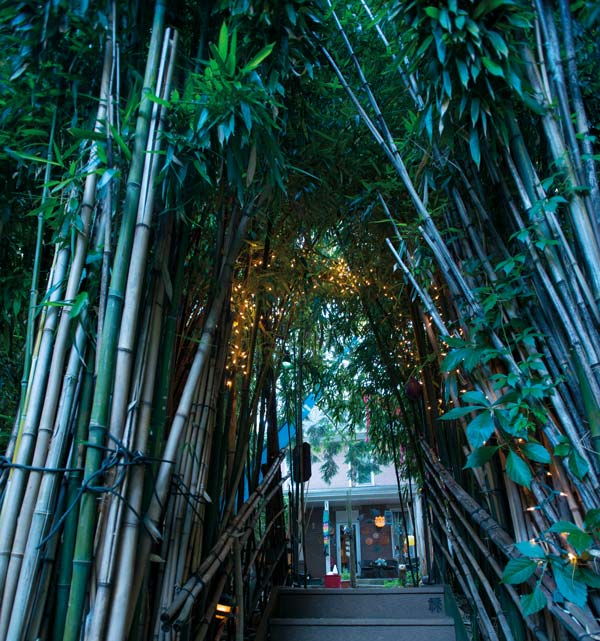 A short set of stairs delivers visitors from the upper portion of the yard and into outdoor “rooms” that are dedicated to gardening, relaxing, dining and entertaining. Bamboo not only forms “walls” for the rooms, but it is used to create stair rails, artwork and more.