“Are there any flowering shrubs I can grow under or at the edge of large deciduous trees?” is a familiar question I hear from long-time gardeners who have mature trees and shade, as well as new owners of older properties. Surely there must be something more appealing than the ubiquitous rhododendrons (azaleas), which (admit it) only proffer spring flowers in garish colors. 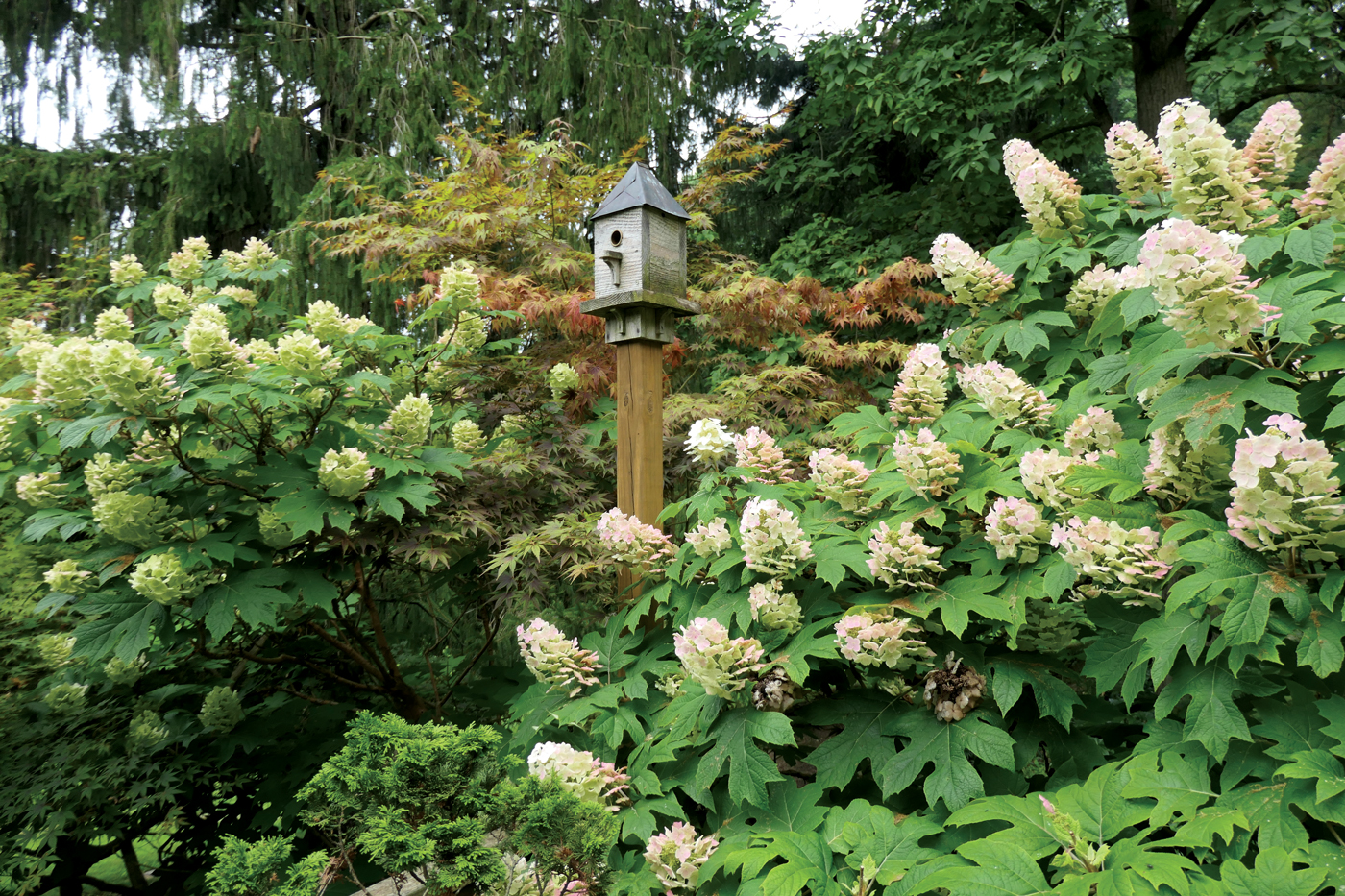 The oak-leaved hydrangea’s flower panicles change color as the season progresses. By mid-summer, the once-white blossoms have transitioned to a pale pink. This is one blooming shrub that thrives when planted under or at the edge of shade trees.

After pointing out how fortunate they are to have mature trees, I share that my very-most-favorite-if-I-could-have-only-one-shrub will thrive under their lamented shade trees. In fact, it not only will thrive, but it will attract attention year-round.

Many of the more familiar colorful garden and greenhouse hydrangeas originate from Asia. But there are two native species: Hydrangea arborescens, which grows throughout the Appalachian Mountains, and Hydrangea quercifolia, which is found in the Piedmont region of the Southeast and occurs naturally in the shaded woodlands of Georgia, Florida, Alabama, Louisiana and Mississippi, where it’s typically found on banks and slopes. Both offer white flowers. 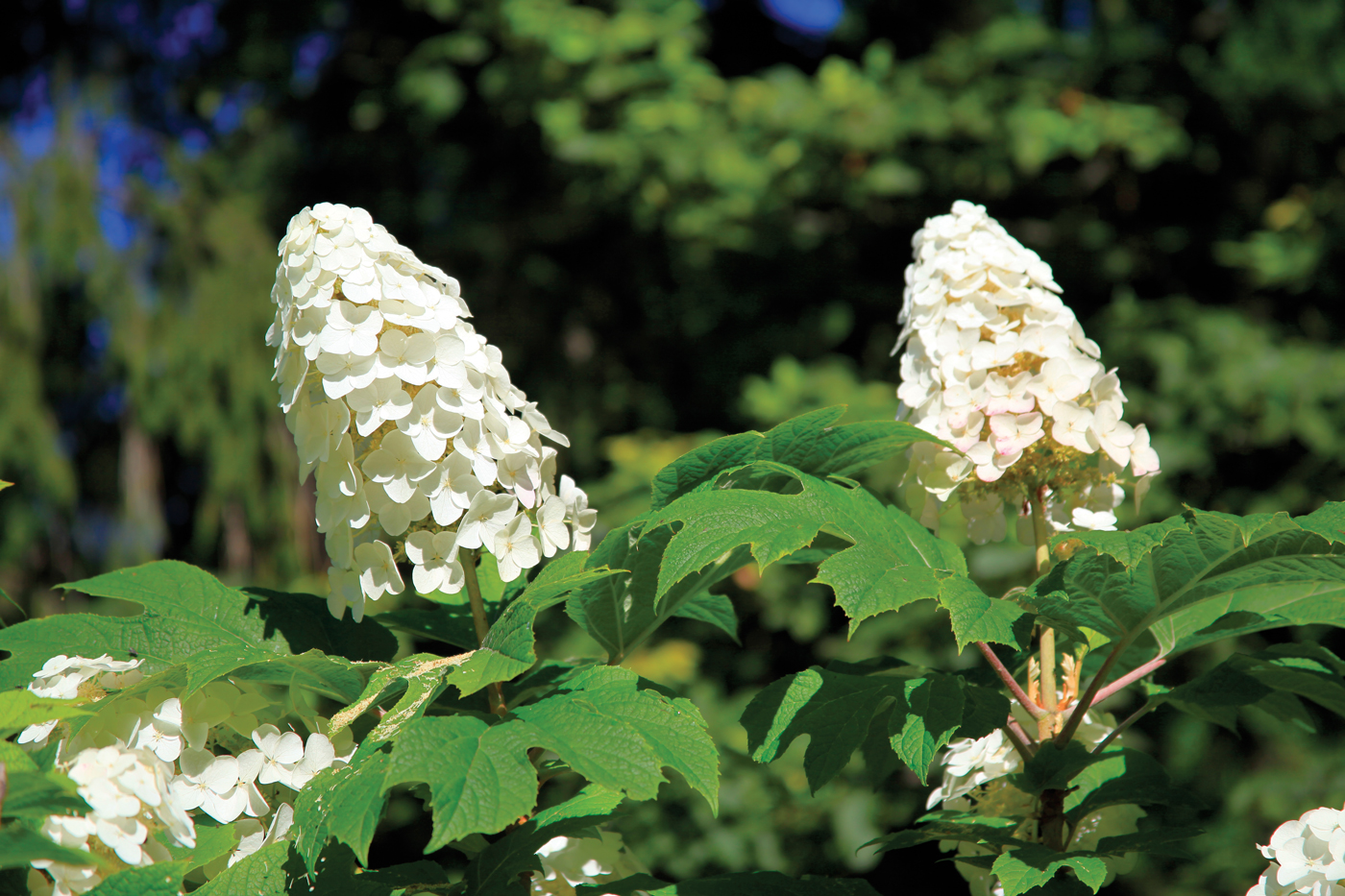 The color of the flower panicles evolve over the course of the growing season – emerging white in May.

The oak-leaved hydrangea was discovered in 1791 by William Bartram (1739-1823) of Philadelphia, at “a large brook called Sweet Water” near Knoxville, Georgia. The son of another eminent plantsman, John Bartram, William was an accomplished plant explorer, artist and writer in his own right. He recorded his southern explorations in Travels Through North and South Carolina 1791, which remains a classic in American literature. William added new plants including oak-leaved hydrangea (pp. 382–383, pl. 7), flame azalea and bottlebrush buckeye to the family collection. The oak-leaved hydrangea was introduced to Britain in 1803.

If you’re ever looking for a day-trip idea, I’d suggest you visit Bartram’s Garden in the Kingsessing area of Southwest Philadelphia. Considered to be the oldest-surviving botanic garden in North America – it dates to the 1700s – it is now a 50-acre public garden. While the gardens are open year-round, the welcome center curtails its hours in the winter months. Admission is free. For details, visit bartramsgarden.org. 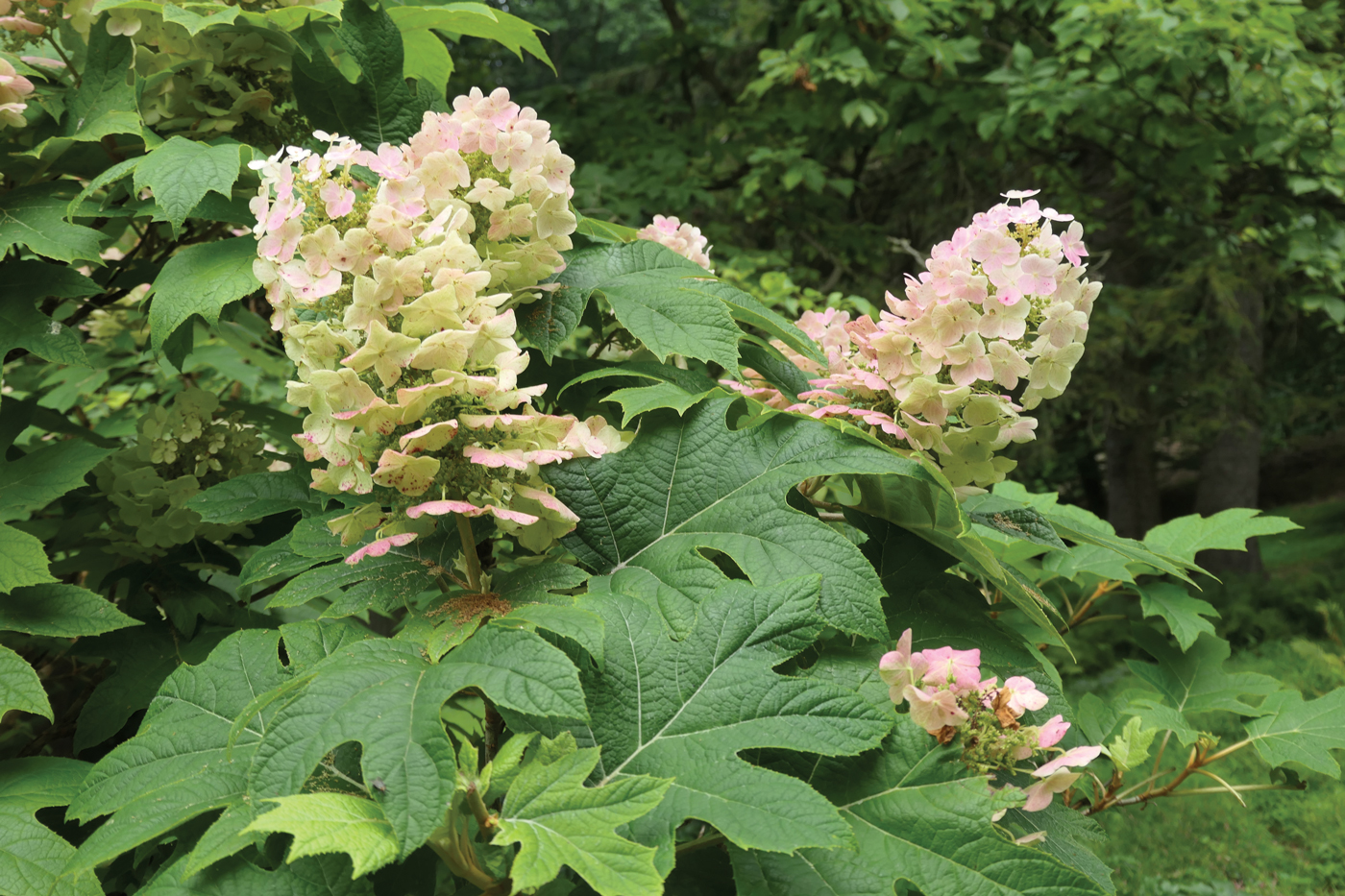 This open, irregularly shaped, multiple-stemmed deciduous shrub grows 8 to 12 inches a year, reaching 3- to 7-feet tall with large 4- to 12-inch oak leaf-shaped leaves. (Latin quercifolia means the foliage of Quercus, the genus of oaks.) It can branch extensively.

The flower is an open panicle, 6- to 10-inches long and up to 5 inches in diameter at the base. There are two different kinds of flowers: tiny fertile “true” flowers and more conspicuous sterile flowers that attract insects to the plant. 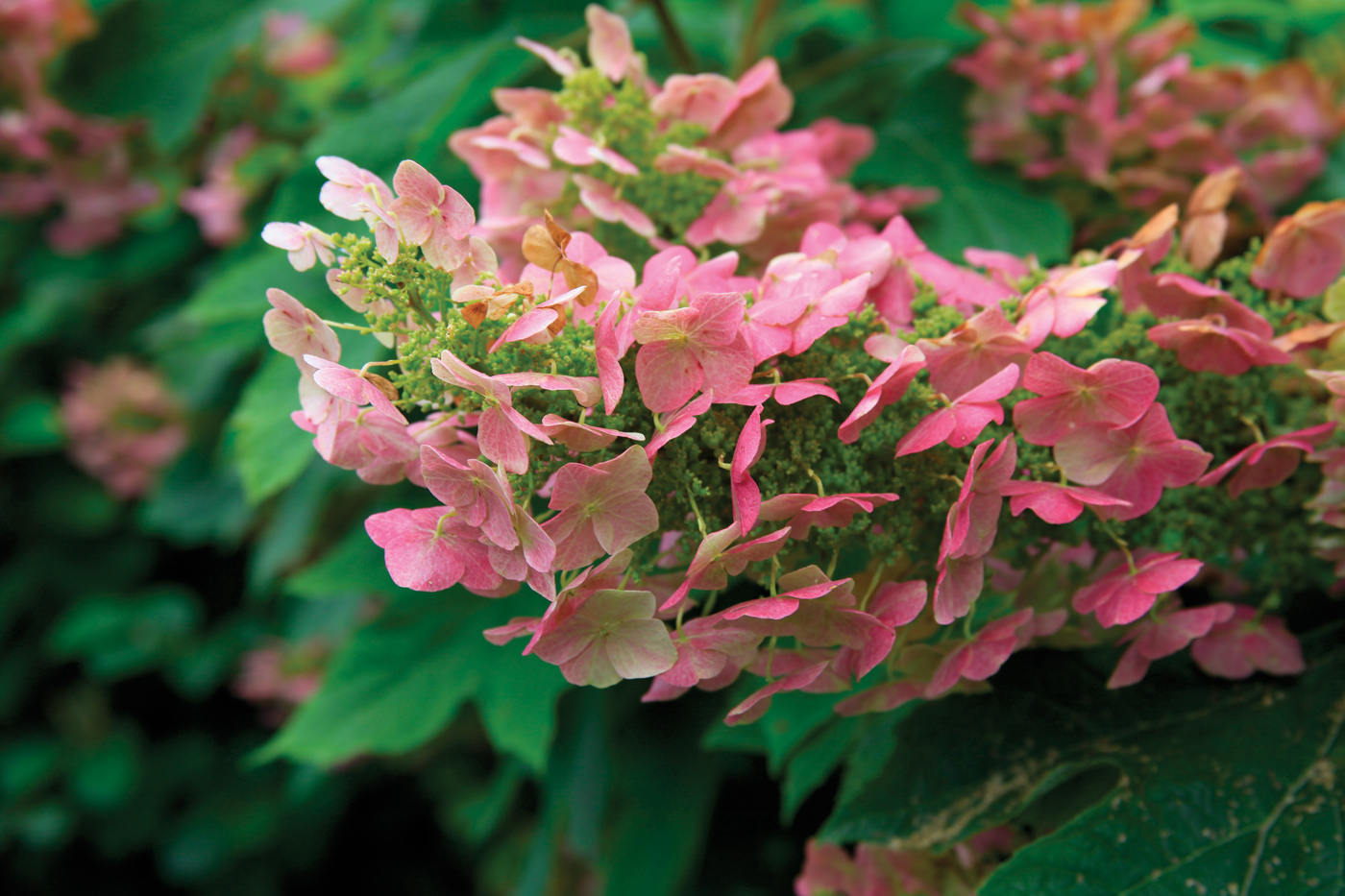 The color of the flower panicles evolve over the course of the growing season – finally becoming deep pink in August.

The numerous white sterile flowers with long stems and dense clusters of white fertile flowers bloom from late spring into September. That’s right! A shrub that flowers for months. (OK: Roses bloom for months, but they are chemically dependent.)

I recommend the widely available cultivar ‘Snow Queen’. It is easily grown in organically rich, moist, well-drained soil in sun to part shade. Early-morning or late-afternoon sun are fine, but intense mid-day sun will harm the flower display and cause the foliage to droop even if the soil is moist. Positioning it at the edge of woodland is ideal; a background of conifers, for instance, will provide not only shade and protection but a backdrop for the flowers and fall color display.

‘Snow Queen’ displays gently tapered flower panicles, 8-inches tall by 5-inches diameter at the base. Unlike most flowering shrubs, the flowers change color through the season. The many flat overlapping sterile flowers open creamy green and mature to pure white. As the season progresses, they turn pale pink, then a deeper pink, and finally russet (polite way to say paper-bag brown). These dried-flower heads can be used to create striking indoor decorations. 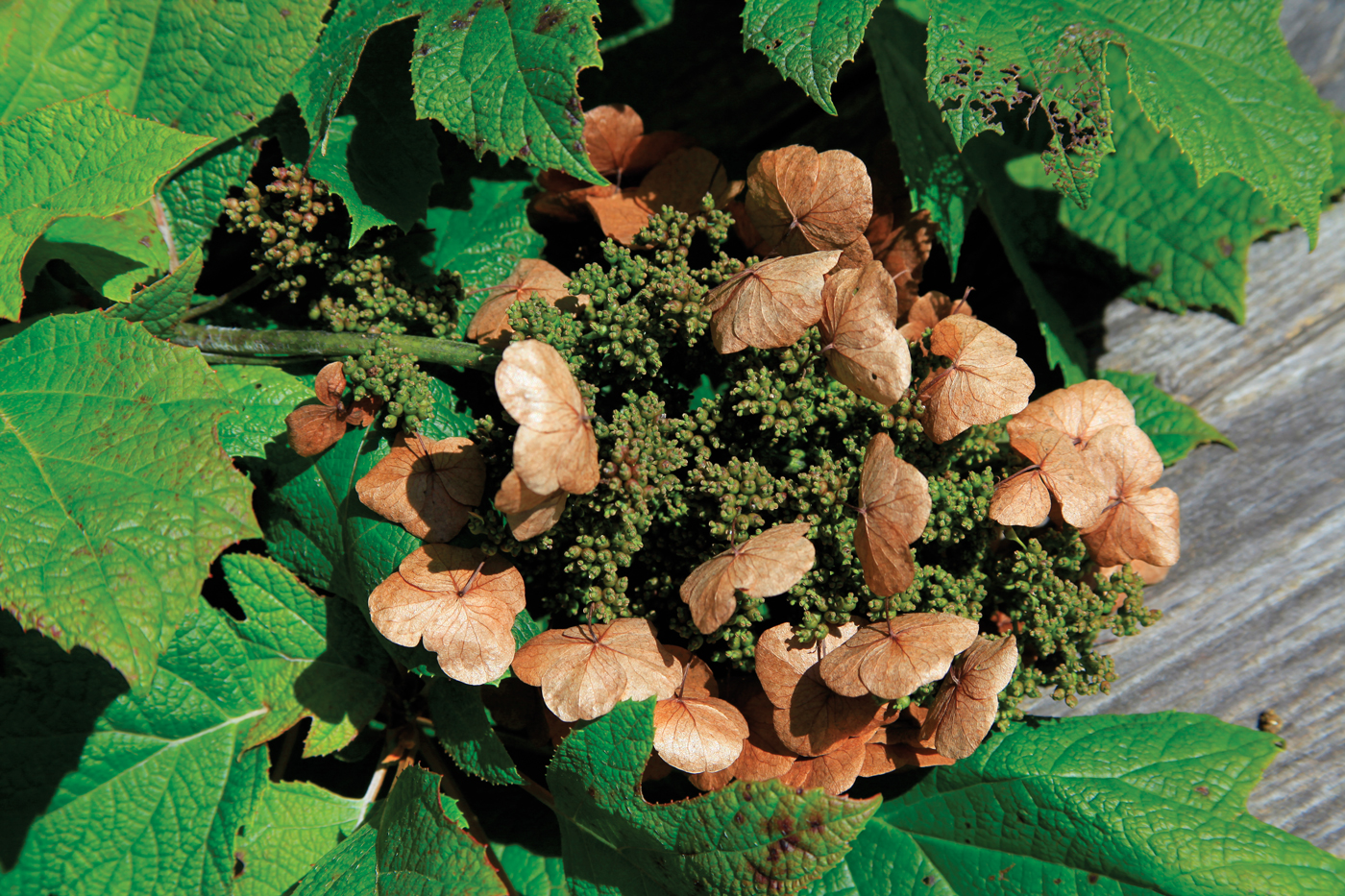 By early autumn, the flowers take on a paper quality and turn russet in color. They make a perfect addition to dried-flower arrangements.

Notably, the large flowers are held erect on the stiff stems even after heavy rains.

In spring, its leathery leaves emerge dramatically from branch tips. The leaves resemble those of red oaks, some deeply lobed, others less so. Early in the year the leaves are light to mid-green in color but darken in autumn and turn shades of deep red, crimson and purple. The leaves shrivel and last well into winter. The shaggy, rusty-brown-colored peeling bark prolongs the season through winter.

It blooms on old wood, so do any corrective pruning immediately after flowering. There is usually no need to prune unless there are stems damaged by winter snows. Deer do love to eat the winter buds.

Hydrangea ‘Snow Queen’ received both the Pennsylvania Horticultural Gold Medal award in 1989 (at that time called the Styer Award), as well as the RHS Award of Garden Merit. It was introduced into cultivation by Princeton Nurseries.

Other cultivars that should be available at good nurseries include:

‘Snowflake’ grows 6- to 8-feet tall with very showy slender panicles of double white flowers, 12- to 15-inches long. However, the stems often flop because of the huge flower size. Introduced in 1960 by Edgar and Loren Aldridge.

‘Alice’ was introduced into commerce by Michael Dirr (of Manual of Woody Landscape Plants fame) through his Georgia Plant Introduction Program. It is upright with a broad, rounded habit; it typically grows 5- to 8-feet tall and as wide. It is most noted for its large and arching flower panicles (10- to 14-inches long), which bloom for 6 to 8 weeks, gradually fading to pink and then brown by late summer, as well as its superior fall foliage color in shades of bronze, maroon and purple. Mature stems exfoliate to reveal a rich-brown inner bark.

‘Pee Wee’ has a compact form, growing to 3- to 4-feet tall and 4- to 5-feet wide. An oak-leaf hydrangea for smaller spaces and gardens.

‘Little Honey’ is similar in habit as ‘Pee Wee’. Its showy, deeply lobed, somewhat coarse, oak-shaped leaves emerge golden-yellow in spring. It retains good golden color well into summer, gradually fading to chartreuse and then green by early fall before finishing the year with a blast of crimson-red fall color. Cone-shaped flower panicles (to 5 inches long) bloom primarily in early summer but will have some sporadic continued bloom through late summer into fall. Flowers acquire pink tones as they age. Stems turn red in winter.

‘Ruby Slippers’ is a cross between ‘Snow Queen’ and ‘Pee Wee’. It is a compact form that matures to only 3- to 4-feet tall and to 3- to 5-feet wide and is noted for its large upright flowers that emerge white but quickly turn ruby red (hence the cultivar name). It offers mahogany-red fall foliage color and exfoliating bark. ‘Ruby Slippers’ was introduced into commerce in 2010 by the U.S. National Arboretum.

Selecting a Plant at the Nursery

Autumn is a great time to add any of these container-grown plants to the garden if the soil is workable. Nursery plants should be two or three years old and growing vigorously on several good strong shoots rising from the base. Remember to tease out the roots if they are constricted in the pot. There is no need to make the hole any larger than the root ball (that is outdated advice).  After planting, tread lightly around the plant to eliminate any air pockets and make a shallow moat around the plant. Do not fertilize at this time of year! Check it frequently over the following days for signs of wilting and water generously. Your plant will live a long time if you provide it with a good start. 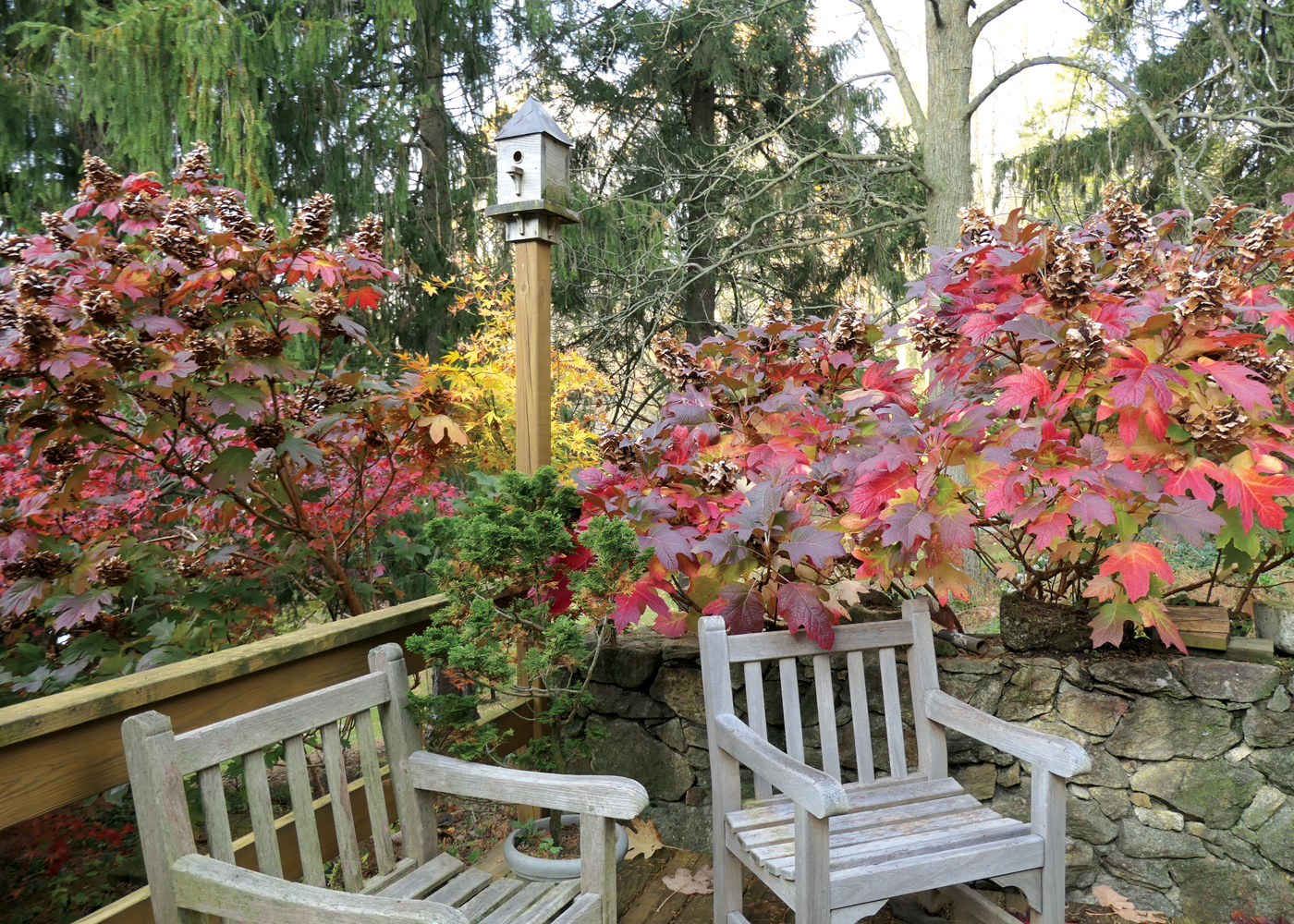 The color of the foliage also evolves over time, emerging light green in spring, becoming a darker green in summer and transitioning to shades of red and even purple by late fall. When the leaves finally shrivel and fall in early winter, the shaggy, rust-colored bark provides visual interest.

A natural mulch of well-rotted garden or leaf compost will increase water retention. Close attention should be paid for the first year in the garden in times of prolonged dry spells. A soaking once a week is better than a drizzle daily. No responsible gardener should use peat. After the first season it will not demand a lot of attention or special feeding. The urge to prune is strong in some gardeners but little pruning is needed for any of these cultivars except to correct from winter damage.