Rice & Noodles celebrated its 9th anniversary on July 17. According to Vy Banh, one of the restaurant’s owners, “Our goal is to be the neighborhood choice for Vietnamese cuisine.” That mission has been more than accomplished as Rice & Noodles has fans far beyond its Manheim Township address.

Ivy and her sister, Alys Truong, are third-generation restauranteurs who are joined at Rice & Noodles by their husbands and other family members. The family tradition began in the 1960s when the siblings’ grandfather opened 13 restaurants in Vietnam. With the fall of Saigon in 1975, the family fled to the United States, where the sisters’ parents and a brother-in-law carried on the tradition of restaurant ownership. By 2005, they had five locations in the New Orleans area. Hurricane Katrina changed all that.

“We came here and started over,” Vy says, referring to the family’s move to Lancaster. At Rice & Noodles, two metal ceiling fans and two metal soup bowls serve as remnants of their restaurants in Louisiana. “It’s a reminder of where we came from,” she says.

Rice & Noodles, which seats about 26, offers an upbeat and fun atmosphere. An aquarium is located near the rear entrance, while a number of curly bamboo plants potted in rectangular glass blocks are scattered throughout. Their shape is echoed in a wall niche that contains glass jars filled with the restaurant’s namesake ingredients. Sleek metal chairs and solid-surface tables fill the dining room. A refrigerated take-out case showcases offerings such as cheesecake, flan, homemade café parfait, yogurt, French macarons and homemade ice cream.

Traditional Vietnamese cuisine is the menu’s focus; included are items from Vietnam’s three regions. “We strive to make customers feel comfortable. We still have people who walk in the door and say this is their first time experiencing Vietnamese cuisine. We help guide them to select something they’ll enjoy,” Vy explains.

One of the “starter” categories she recommends is the noodle salads. These vermicelli rice salads are served at room temperature and include shredded lettuce, cucumbers, bean sprouts and cilantro with a selection of protein. “It’s the perfect blend of salad and noodles. The salads are also a great lighter selection during warm weather,” she notes. She also recommends that first-timers sample the restaurant’s soups. Rice & Noodles Pho Bo (beef noodle) is made from a family recipe handed down from Vy’s grandfather.

The menu also includes French-bread sandwiches, family-style and stir-fried entrées, rice platters, and steamed noodles. The restaurant’s signature dish is pan-fried rice noodles served in house garlic sauce accompanied by a choice of protein. Vy says it makes for a vegan-friendly or gluten-free dish, noting, “A lot of Asian cuisine is gluten-free, and serving gluten-free dishes is not new to us; we’ve had items on our menu for the last eight years.” Another item of note: All the meats at Rice & Noodles are marinated in lemongrass, a staple in Vietnamese cuisine.

As for desserts, Vy makes them all herself. “I chose my favorite desserts, including French macarons and ice cream in my three favorite flavors: coconut, Vietnamese coffee and pandan,” she says.

And it seems that Rice & Noodles will be carrying on the family tradition of growth. A second location at 58 N. Prince Street is scheduled to open by year’s end.

With football season in swing, great food fast is important to those who plan to spend their weekends glued to the big screen! Some places to consider:

■ Captain Gus’s Steak Shop, 600 W. Orange Street, Lancaster, 392-9929. Captaingusssteakshop.com and on Facebook. Known for its cheesesteaks, this family-owned steak shop has been in operation since 1968. Its namesake and founder, Gus Karpouzis, passed away in 2012, but son, Nick, and daughter, Phyllis Rothweiler, are carrying on the family tradition. Seating is available at the counter and at tables. Take-out is available. 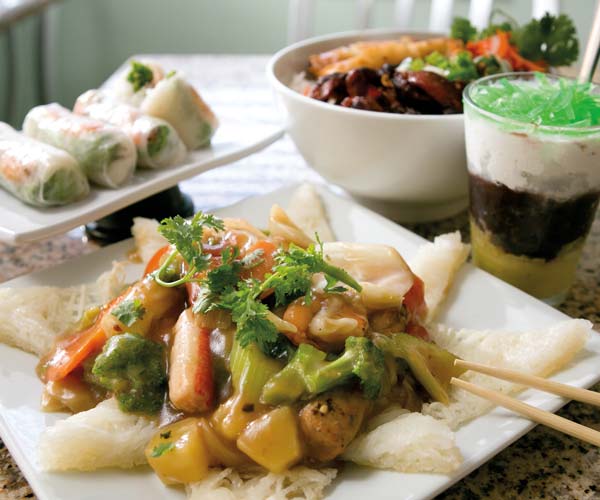