From a forager’s perspective, morel mushrooms and ramps are the real harbingers of spring.

In Jim Showers’ opinion, there’s nothing better than being one with nature on a beautiful spring day. April just might be his favorite month of the year. Even tax day doesn’t get him down, as he views April 15 as an important day in the cycle of nature rather than a date with the IRS. “That’s usually when my daffodils are peaking, and when the morels are starting to emerge,” he explains. “I love morels,” he muses. “They taste like the woods smell.”

Morel mushrooms might best be described as the holy grail of foragers and foodies alike. The delicate and elusive mushrooms are the bounty of foragers who traipse through the woods to reach their favorite hunting grounds. According to Jim, “hunting” is the operative word. “There are no guarantees,” he reports. “You can look all day and come up empty-handed. But, you know what? Part of the fun of hunting morels is just being outdoors and enjoying the woods before the trees leaf out.”

Like many foragers, hunting for morels is part of Jim’s DNA. “I’ve been hunting since I could walk,” he remarks. “It was always a family affair,” he says of engaging in the spring ritual with his grandfather, aunts and uncles. Now he hunts with friends like Dave Thompson, who is retired from Longwood Gardens and makes the trek to Lancaster from his home in Wilmington, and Kevin Lehman, who operates Kevin Lehman’s Pottery and Lancaster Creative Factory.

Like most hunters, Jim, a floral designer who lives near Elizabethtown, is vague when it comes to divulging the location of his favorite hunting spots, only saying that morels “grow all over; you just have to find them.” He does add that for some reason, they tend to pop up in old apple orchards and around dying or dead elm, sycamore and ash trees. “They like to grow along old dirt roads, too,” he adds. Jim also keeps his eye on the weather. “I find that they like damp, wet weather and cool nights. If you have those conditions, they pop up overnight.”

The cone-shaped morels, which grow throughout the United States (with the exception of the desert Southwest and coastal areas of the Deep South), resemble sponges or beehives. “Five or six varieties grow in this region,” Jim says of the mushrooms, whose color tones range from cream to brown to gray. They are fragile and highly perishable. “I never carry mine in a plastic bag,” Jim says. “Mesh bags are much better; they help to spread the spores.” By late May, they’re just a memory.

If foraging isn’t your idea of fun, don’t despair. Morels, which can cost as much as $50 per pound, are now available through online sources and at farmers markets and specialty stores. They’ve also become a cause for celebration at restaurants across the country – in California, restaurants are adding foragers to their staffs in order to have the inside track on morels and other goodies – and are the basis of fundraising festivals that are primarily held in the Midwest and Appalachia.

Morels are not easily cultivated, although the Internet is awash with growing kits of all kinds. “Everyone I know who has tried one had no luck,” Jim reports.

Jim likes to use his prized finds in stir fry, risotto, soups and pasta dishes. Sometimes he simply sautés them and serves them as a side with steak. “I always slice them down the middle to make sure no critters are living in them,” he says. He also cautions that you should never eat a raw morel and that it’s better to overcook the morels rather than undercook them, as it could lead to an upset stomach.

Peruse the Internet, and you’ll discover all sorts of ways to prepare morels. Fans like to sauté the morels and place them atop a cut of beef, a breast of chicken or a pork chop. Still others like to fry them (you’ll need eggs, butter, salt and some sort of coating, i.e. corn flake crumbs, flour, cracker crumbs, cornmeal or even potato chips). One morel fan cooks them in Diet Coke for 10-15 minutes to add sweetness. Still others suggest cooking them in heavy cream, wine or beer. Fans also offer variations on wrapping them in bacon and broiling them until the bacon is thoroughly cooked, while others suggest working crabmeat or cheese into the nooks and crannies. Some people have luck preserving morels by freezing or drying them. One of the best recipe sites is thegreatmorel.com.

Ramps are also on Jim’s radar in the spring. Also known as ramsons, wild leeks and Tennessee truffles, ramps are part of the allium (onions, chives, leeks) family. Early settlers depended on them for their “cure-all” qualities; due to high quantities of Vitamin C, ramps helped to prevent scurvy and other diseases caused by malnourishment. In Appalachia, where ramps grow rampantly, they were commonly referred to as “Spring Tonic.” Jim describes their taste as having a unique “garlic/onion flavor.” Chicago is actually named after ramps – it’s a derivative of the native word shikaakwa, which referred to the plants that thrived along the river.

To find ramps, Jim must forage farther afield. “I’ve never found ramps in Lancaster County,” he says. “I do find them in York County, and they absolutely thrive in the Hazelton area.” Indeed, the somewhat finicky plants tend to grow/propagate in hillier terrain. Yet, they are somewhat widespread, growing in the woodland as far south as Georgia and as far north as Quebec. While they’re rare on this side of the river, Jim says they’re easier to spot than the elusive morels. “I look for indicator plants, like Jack-in-the-pulpit and May apples. The three of them tend to grow together.” According to Martha Stewart Living, they also favor the understories of beech, birch and sugar maple trees. Like morels, they come and go in the spring, making an appearance before the trees leaf out and disappearing once exposure to the sun becomes limited.

Like morels, ramps have captured the fancy of the culinary world. According to the New York Times, ramps have become the No. 1 culinary obsession among the city’s chefs and foodies. But, they don’t come cheap – of late, ramps have been fetching $25 (or more) per pound. Because of increasing demand, their sustainability is being debated, hence Quebec deemed them a threatened plant in 1995, and the Great Smoky Mountains National Park, where Cherokees once revered and harvested them, has totally banned their harvest.

Still, they are celebrated. Chefs at New York restaurants adore ramps and add them to salads, mashed potatoes and butter and serve them atop cuts of beef, chicken, pork, etc. Jim reports that fire companies in the mountain towns of Pennsylvania have turned ramps into fundraising gold.

Getting Acquainted with Morels & Ramps

According to Jim Showers, it’s essential that you know what you’re doing and looking for when foraging. Mushrooms can be poisonous, even lethal.

Classes are offered monthly and involve foraging for what’s in season and tasting what has been gathered. Fee is $15 per class. Details: 332-8710 or hornfarmcenter.org.

Naturalist Lisa Sanchez will lead the program that will acquaint participants with the season’s wild but edible plants. Sample wild/natural food. Cost is $2/liability waiver is required. Registration is required. Call 295-2055 by April 22.

The “granddaddy” of all Appalachian ramps festivals (or feeds, as they like to say) is celebrating its 79th year. Festival features heritage crafts, mountain music and a ramps feast. Information: richwoodchamberofcommerce.org.

The author of Field Guide to the Wild Mushrooms of Pennsylvania & the Mid-Atlantic will lead a walk/talk in Mt. Gretna on August 23 (1-3 p.m.) and return on October 9 (1-3 p.m.) to give a presentation. Details: visit brmushrooms.com. 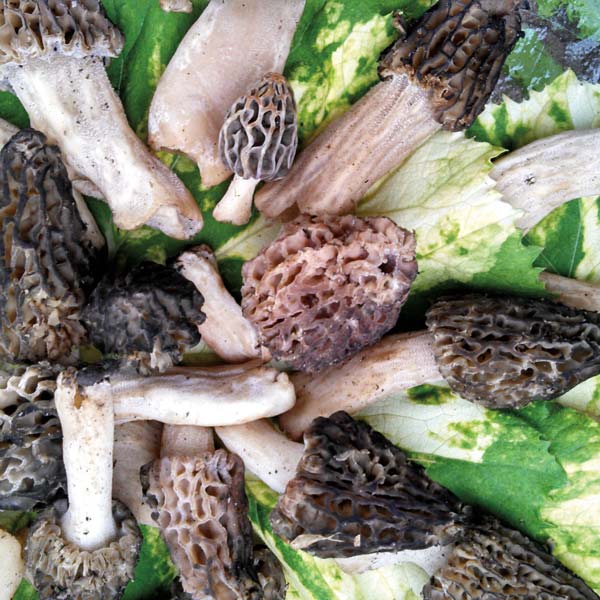 Morel mushrooms typically emerge in mid-April and disappear by the end of May. Depending upon the variety – five or six grow in this region – colors range from cream to gray.