If your New Year’s resolution is to cut back on alcoholic, caffeinated and sugar-laden beverages, now might be the perfect time to explore kombucha. 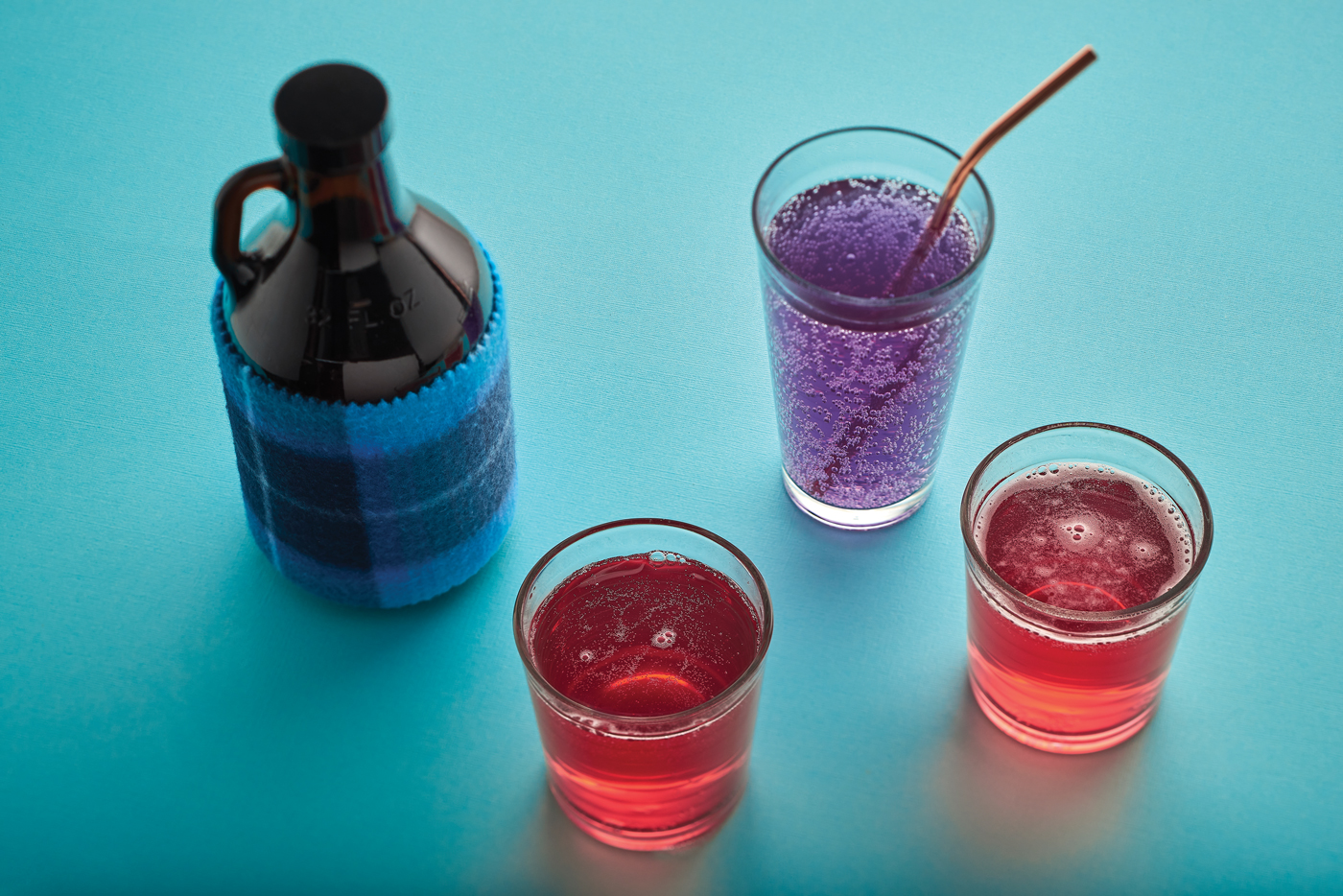 I love sparkling water and am always looking for fizzy, refreshing drinks without the sugar contained in soda. Kombucha certainly qualifies. Technically, it’s fermented tea, but everything you might associate with those two words should be temporarily set aside. Rather, think of fun flavors centered on fruits, herbs, spices or ginger that deliver tart, sweet, funky or floral taste sensations. Kombucha is also carbonated, which enhances the refreshing quality with a crisp finish.

While I enjoy kombucha almost exclusively for the flavor, there are purported health benefits that act as a primary driver for folks to seek it out. The first among these is the inclusion of probiotics, such as those found in yogurt, which is fermented milk. They’re beneficial bacteria that aid in digestion. Kombucha is also rich in antioxidants, B vitamins, amino acids and polyphenols like those found in olive oil.

“Some people like to drink a cup of kombucha in the morning,” says Jessica Butzer, owner of Renewal Kombucha in Lititz. “It’s routine. They know how much they drink in a day.” (FYI: the Centers for Disease Control recommends limiting consumption to 4-oz. servings one to three times per day.) 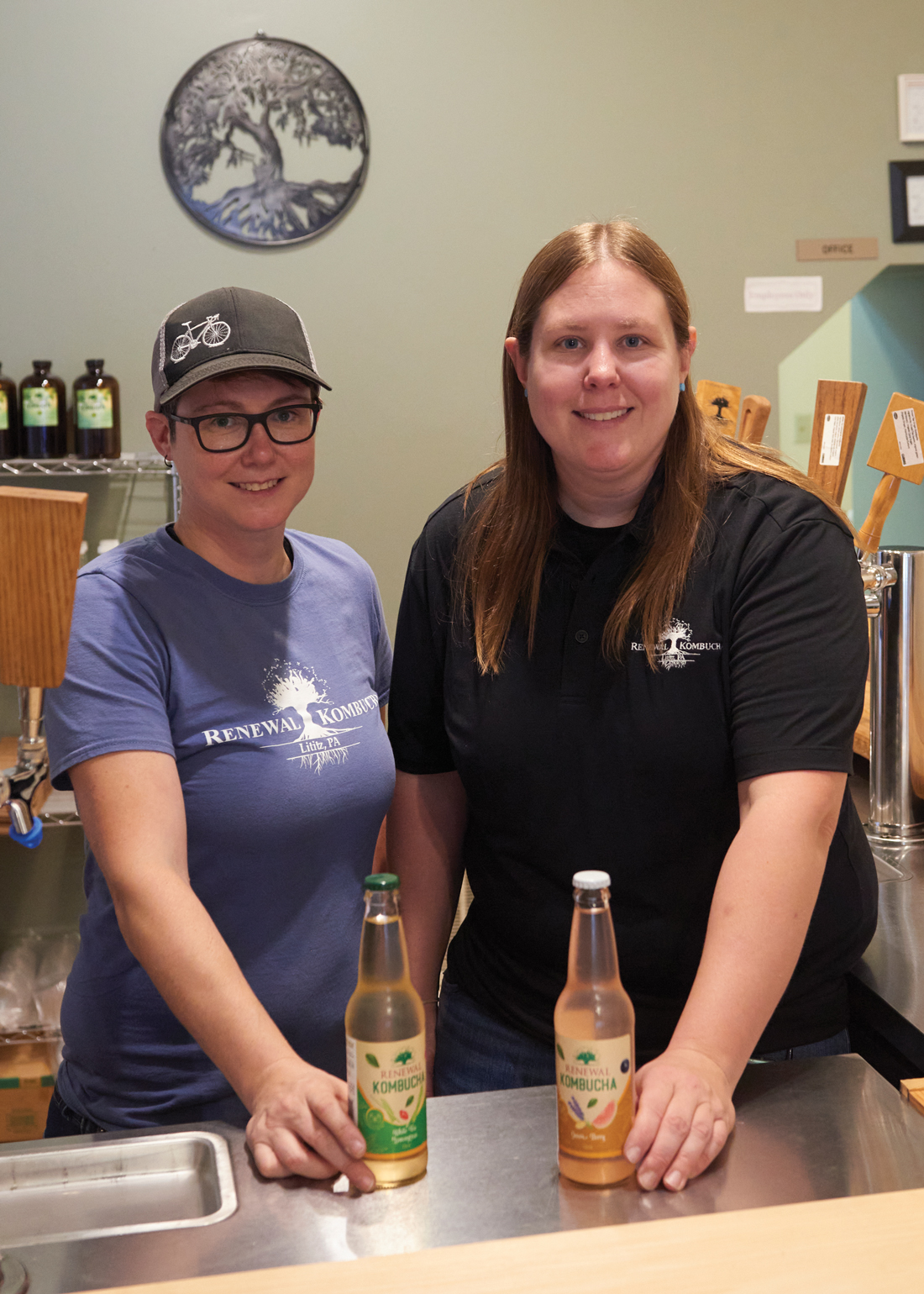 Michelle Ibberson and Jessica Butzer are the co-owners of Renewal Kombucha.

Jessica also points out that kombucha is an “alcohol alternative, a casual drink” as it contains less than 0.5% alcohol. It can also be used as a cocktail mixer with gin or rum, such as in a mojito. (Hence, it’s become a popular alternative to alcohol at bars and restaurants.) Because of that, January would be a perfect time to add kombucha to your routine – the Dry January movement has gained popularity over the last eight years or so. Viewed as a way to make a clean break from the excesses of the holidays, health organizations such as the Cleveland Clinic tout the benefits – weight loss, better sleep, an improved immune system, healthier skin and less brain fog – of an alcohol-free month.

It is believed that kombucha originated in Asia – more than likely China – as early as 212 B.C. Its health benefits prompted it to be called the Tea of Immortality. Legend also has it that centuries later, the Japanese emperor recovered from a serious illness thanks to a tea that a Korean physician by the name of Komu-ha prescribed.

Expanding trade routes allowed kombucha to be introduced to Russia, India and Japan. It was popular in Europe until the start of World War II, when tea and sugar shortages curtailed its availability. It enjoyed a European resurgence after the war and became popular in the United States during the latter part of the 20th century.

According to Grand View Research, global sales of kombucha reached $1.67 billion in 2019 and are expected to increase by nearly 20% annually through 2027. North America is the largest consumer of kombucha.

How Kombucha is Made

The process starts with steeping large bags of black or green tea, dried botanicals and herbs in hot water. The tea is added to a tank containing a SCOBY (Symbiotic Colony of Bacteria and Yeast). It looks a little alien, but the process isn’t too distant from brewing beer and it’s almost identical to making vinegar. 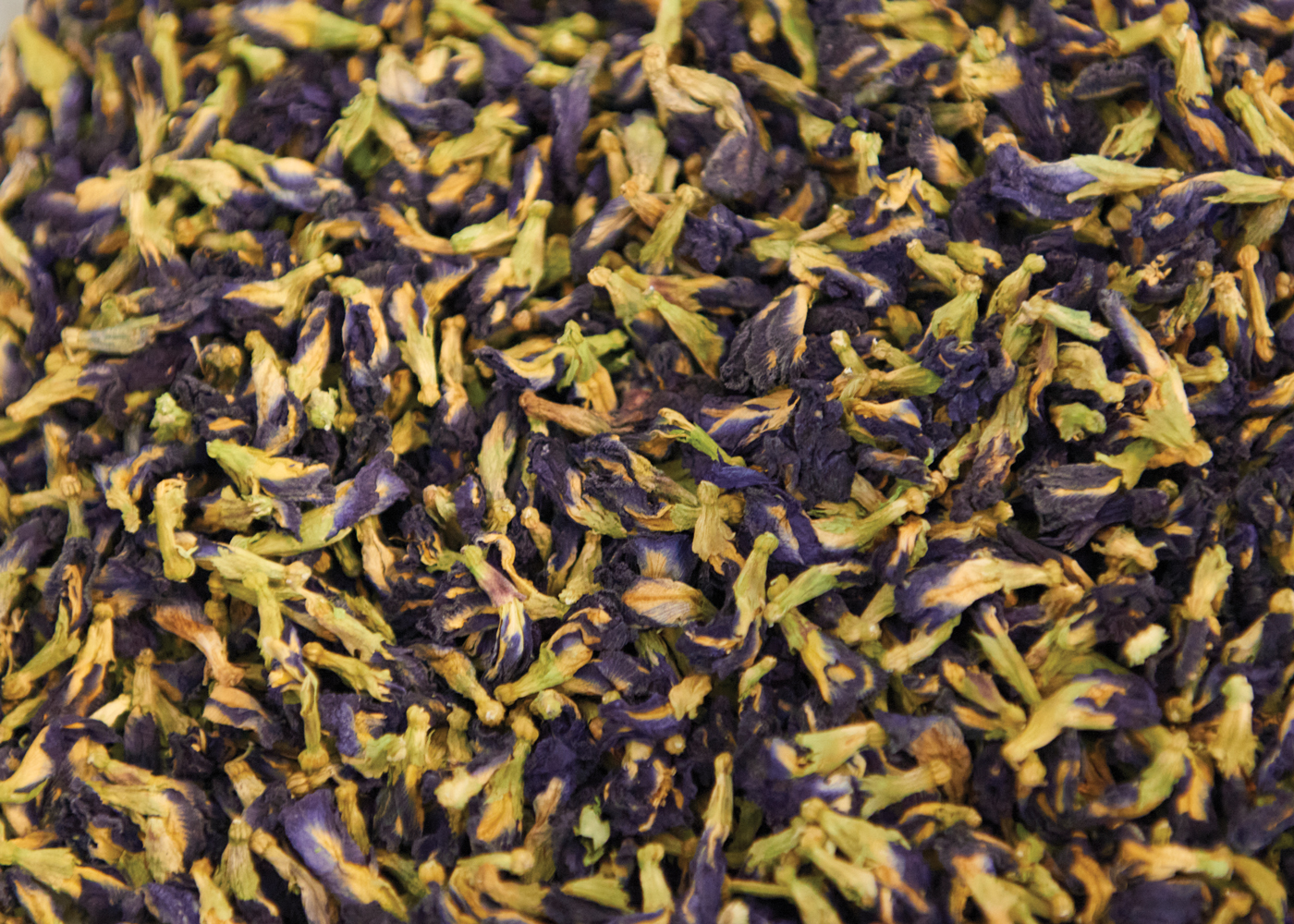 A familiar characteristic of kombucha compares to the tartness found in apple cider vinegar, which also uses a “mother” to produce the final product. (A vinegar mother converts sugars and oxygen from the air into acid in a similar fashion that a SCOBY produces kombucha.) Yeast feeds on sugar and bacteria to create the fermentation process. Because Renewal uses organic cane sugar, which is almost entirely consumed by yeast, only a few grams of sugar remain in the final product. They prepare batches from five to 50 gallons and draw only enough kombucha to keep the SCOBY healthy. There are backup batches in case something goes wrong to ensure consistency, and pH levels are checked regularly. 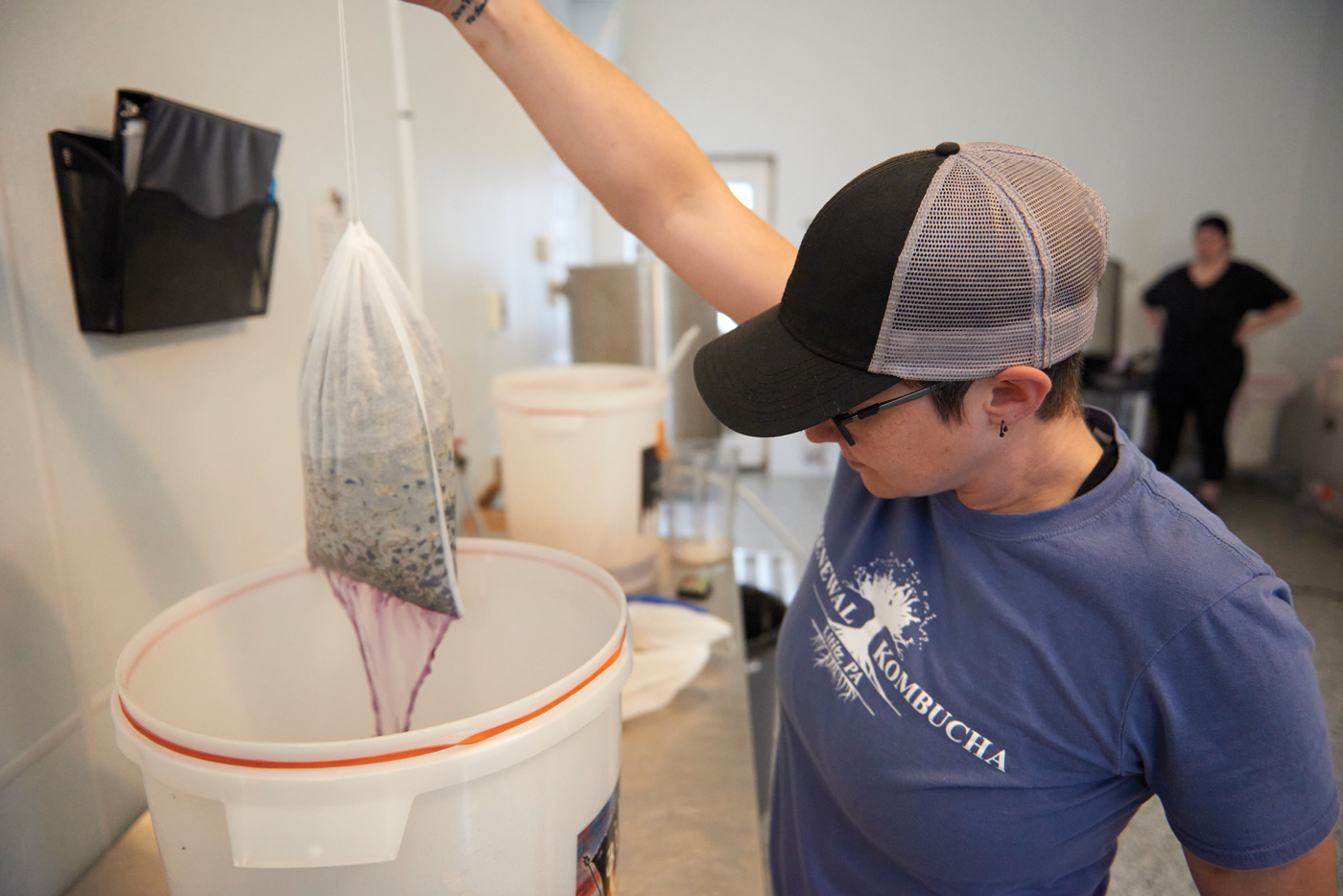 The process lasts for about 30 days before the kombucha is filtered and force-carbonated in a keg with carbon dioxide, again much like beer. Because the ingredients lack any added preservatives, it’s necessary to keep it refrigerated and enjoyed within about a week or two of filling a growler for optimal freshness. 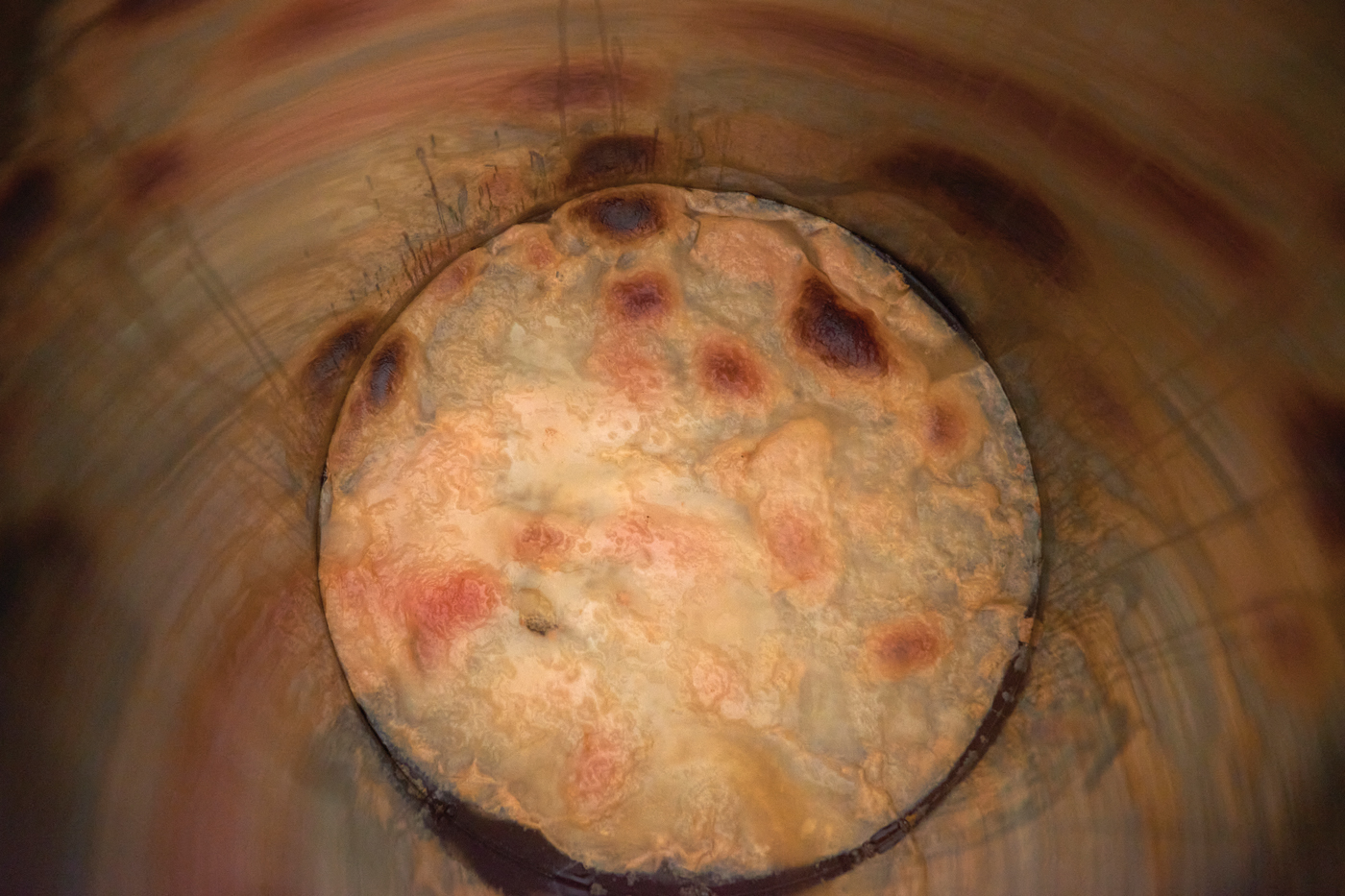 A healthy SCOBY in a large stainless-steel tank. The dark spots are accumulations of yeast during fermentation.

Established in 2015 by Jeremy Sayer, Jessica expressed interest in acquiring Renewal Kombucha in 2020. It wasn’t her first new project. Earlier that year, on a handshake agreement, Jessica agreed to buy Bruno’s of Lititz – a hoagie, salad and soup shop open for lunch – from Jedd Erdman “Then the pandemic happened,” she says. 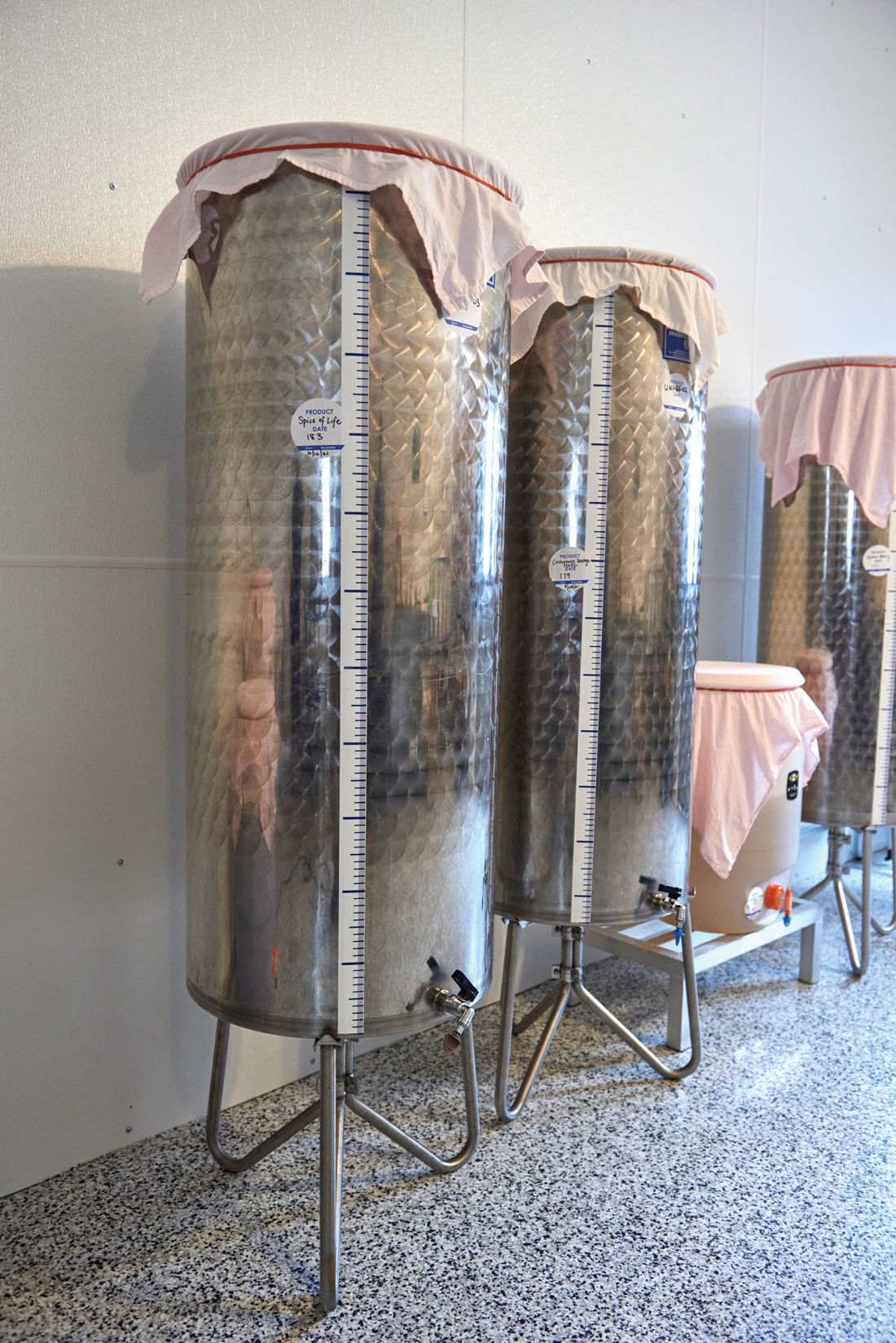 Buying Renewal initially proved to be a bit intimidating. “I took off a day at work, came into Renewal, and decided I didn’t want to buy it,” Jessica recalls. “We didn’t know anything,”  co-owner Michelle Ibberson elaborates. Fortunately, Jeremy agreed to stay on to help in the transition, as did brewer Katie McGann.

For the first three months, Jessica worked a full-time job, plus put in hours at Bruno’s and Renewal. As for Michelle, she was working as a carpenter at TAIT when the pandemic hit. She was laid off and when she was asked to return to work in the spring of 2021, she decided that helping to get Renewal off the ground would offer her more opportunities, even in the midst of a pandemic. “The time gave people the opportunity to grow, to take chances that maybe they would never take,” says Michelle. “TAIT will still be there and they’ll continue to grow.”

In the fall of 2021, Renewal Kombucha and next-door neighbor, The Savory Gourmet, traded adjacent locations. Facilitated by the property owner, the trade offered Renewal a smaller tasting room with an opportunity to take on additional production space in a separate building. It was a win-win, with The Savory Gourmet adding to their retail space. 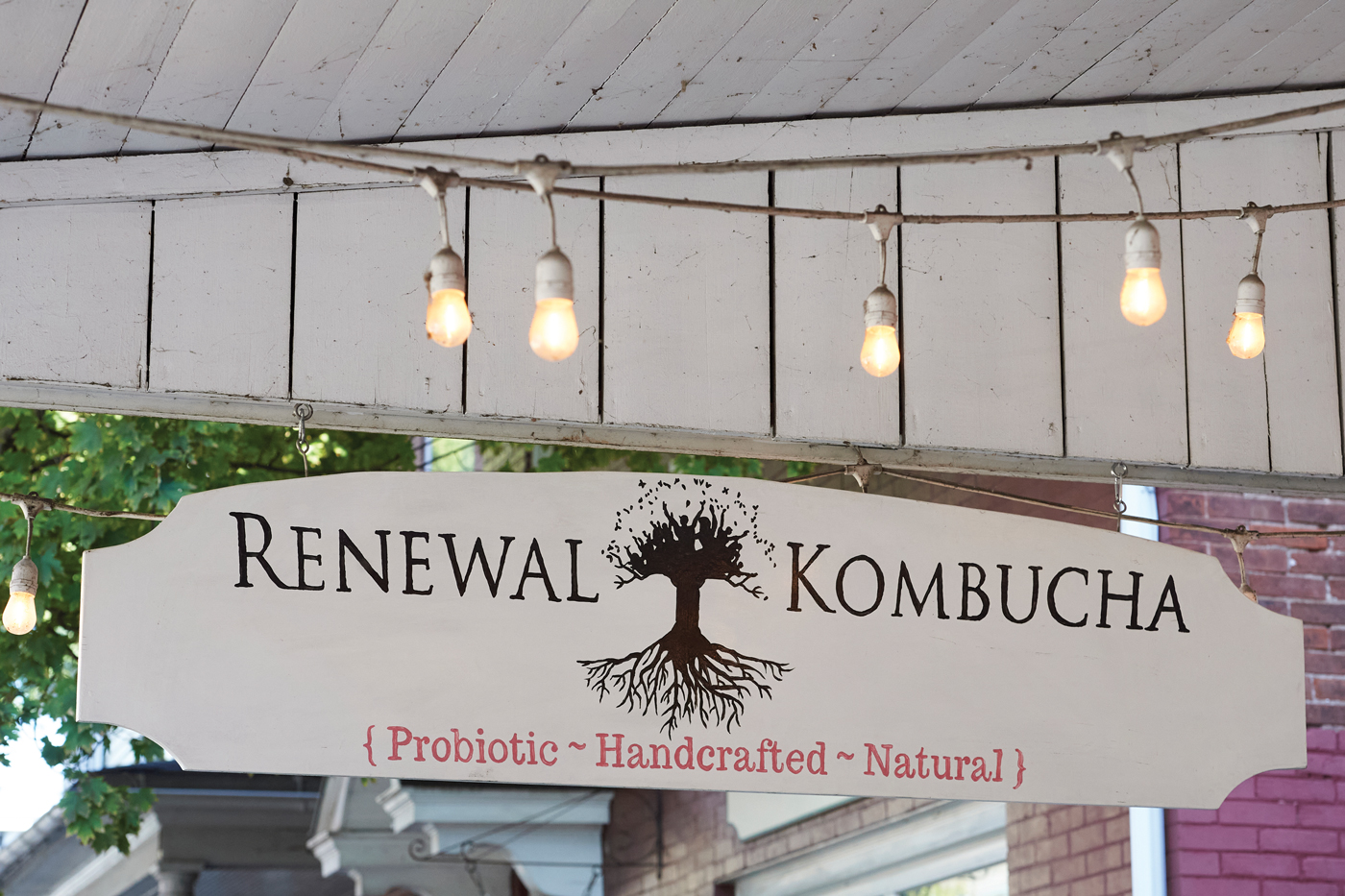 Signage outside of Renewal Kombucha’s tasting room on North Broad Street in Lititz.

“When I did decide to buy the business, we needed to separate the taproom from manufacturing,” Jessica explains. “We have 100% made it our own. The recipes are the same – moving forward we’re going to invent some of our own.”

According to Katie, Jessica was adamant about not changing any of the recipes for the first 12 months in order to ensure consistency for current customers. Consistency would also enable her to learn the inner workings of the business, with the idea of improving the production process.

Her past work training included that of Lean Six Sigma, a method made famous by Toyota for relearning and improving processes within a business. Jessica applied those tools to Renewal, with the goal being to improve efficiency and make it their own. Katie taught Jessica and Michelle the processes and standards and together they redefined their workflow in their new production space. “She came in and said, ‘We’re going to change this and this and this,’” says Katie. “It’s not just talk. You know she has this vision, so you go with it.” Jessica gave Katie the freedom to come up with new production and workflow ideas. “It was a very collaborative time, and it still is,” Katie notes. “The solution has to involve all of us,” says Jessica.

For a while, I bought kombucha at a big-box store. The flavors tended to be the same. I also discovered that the six-bottle boxes go quickly and tend to be expensive. Touted with a longer shelf life, widely distributed kombucha also tastes different. When it comes to mass-produced kombucha, producers “ferment tea then add flavors after,” Katie explains. “It could ferment in the shipping process, it’s harder to control quality. We ferment all of the ingredients, so it has a much more mild flavor.” 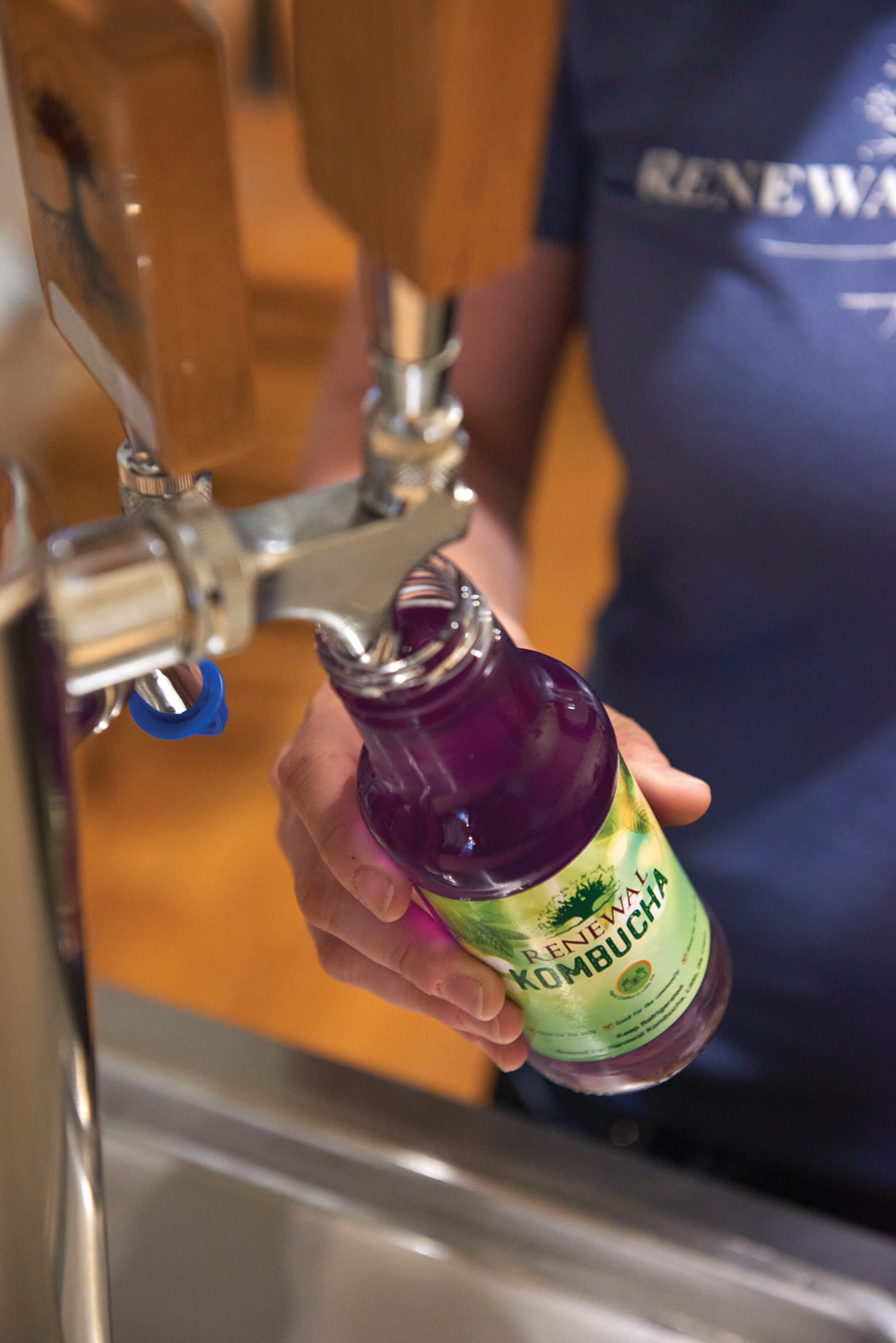 Getting people to try kombucha can be a real challenge. “It’s converting people with bad experiences with kombucha, and convincing people who have never had it to try ours,” says Katie. “I try to gauge flavors to find what they like, like fruity or ginger, then get them to try other flavors. People try brewing it themselves, which can be dangerous,” says Katie. “It’s just
like canning – it can go bad and you can get sick.”

Throughout the process, sterility is critical to keep the kombucha from contamination of mold or even fruit flies. As with sauerkraut, the acidity from fermentation must be high enough to destroy bacteria. Since kombucha is fermented and often unpasteurized, start with a trusted source, and begin by trying a small portion to see how your body reacts, if at all.

Experiencing Renewal Kombucha’s tasting room in Lititz is like going into a brewery, only it’s devoid of alcohol. They offer free tastings to experience their mainstay and seasonal kombucha brews. Bottles are available for purchase. My preference is growler refills: a 64-oz. refill costs $15, while a 32-oz. growlette refill costs $9. I keep growlers in both sizes stored in a collapsible crate in the car. 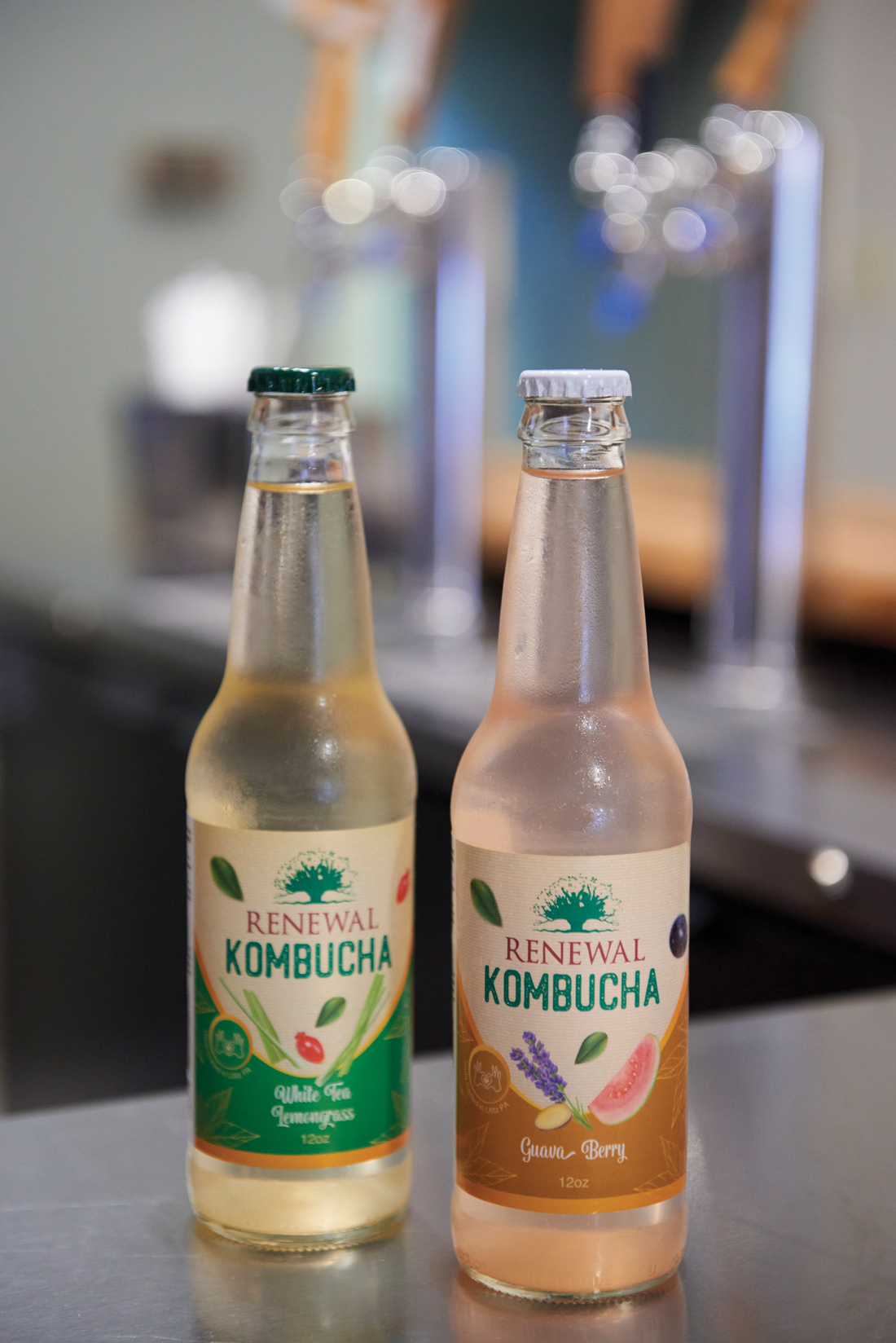 Bottles of kombucha are available for sale at Renewal’s tasting room and a variety of locations.

Recently, Stauffers of Kissel Hill has started carrying a selection of Renewal’s bottled flavors in their stores. In addition to Stauffers, it’s available at this growing list of area locations: