Few other trees and shrubs can compete with the sheer exuberance of the crepe-myrtle’s flower display, which comes in late summer when few others are blooming. Its colorful ornamental bark is a highlight of winter. Add good fall color, and you’ll understand why the crepe-myrtle is a first-rate, four-season ornamental. 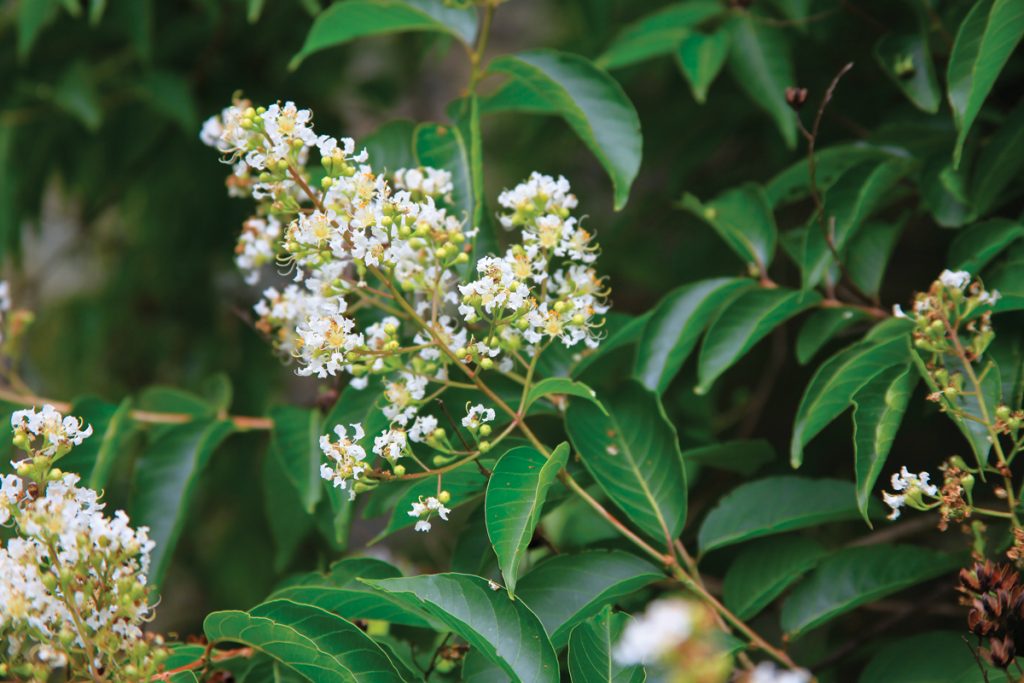 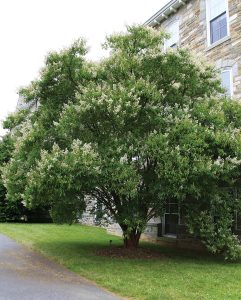 In response to last month’s Gardening Journey about small trees, this magazine’s editor commented that her favorite small tree is the crepe-myrtle. Like many who have lived in or visited our southern states, she has happy memories of her grandmother’s house in North Carolina being surrounded by them.

She also recalls that year after year, her father would buy a crepe-myrtle in North Carolina and replant it in Lancaster County. And, every attempt yielded the same results the following spring: a dead crepe-myrtle.

Crepe-myrtles are definitely the darlings of the South. Records reveal that a ship arriving in Philadelphia in 1799 brought seeds for George Washington to plant at Mount Vernon. However, more recently they’ve managed to make inroads in colder climes and are charming Northerners.

Crepe-myrtle is generally considered a hardiness zone 7 plant. Lancaster County is usually considered zone 6b, but with global climate change, there has been a trend for our winters to be milder and more hospitable to trees such as crepe-myrtle. Also, hardier cultivars have been introduced in recent years. 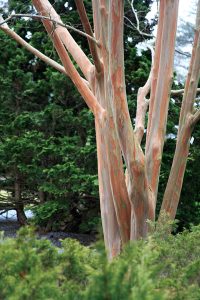 Crepe-myrtle, Lagerstroemia, is from a small family of mainly tropical plants that includes a familiar annual, Cuphea ignea, commonly called cigar flower because of its tubular flowers in red-hot colors. Crepe-myrtle is a multi-stemmed, upright, round-topped shrub or small tree. Newly emerging foliage is a deep, reddish bronze, which matures to a lustrous, medium to dark green.

The flamboyant flowers are in large panicles and are displayed from July to September. Think of this, flowering up to 100 days! The flowers can be white, pink, coral, rose, brilliant red, lavender or purple in color. Individually, each flower is fantastically shaped with six crinkled and ruffled petals, each tapering to a slender threadlike stalk.

As attractive as the flowers may be, another appealing characteristic is the tree’s wonderful exfoliating bark. Plant your tree where its eye-catching winter bark can be appreciated up close. Its first-rate, fall-foliage color is also an attribute. The fall color varies, ranging from yellow to orange to red to pink, sometimes on the same plant. After flowering, persistent capsules remain, which might or might not be considered ornamental.

There are two species of crepe-myrtles: L. indica is native to China and Korea, while L. fauriei is native to Japan. L. fauriei is considered more cold-hardy, but because of its mediocre white flower, it is not widely grown. However, it has played a major role in the U.S. National Arboretum’s breeding program pioneered by Dr. Donald Egolf, as it has contributed increased hardiness and mildew resistance to the new hybrids.
This important breeding program for crepe-myrtles has been going on for years. Their introductions are the mainstay of crepe-myrtles you find in parks, home gardens and roadside plantings. 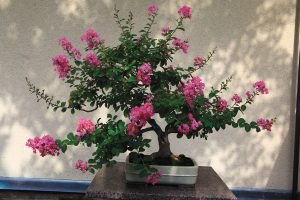 And, I’ve learned that there are several cultivars that readers should be able to establish in their gardens. I spoke with Dr. Margaret Pooler, a plant geneticist at the National Arboretum (usna.usda.gov), and she recommended ‘Natchez’, which was one of the first hybrids developed there. She reports it has a fast growth rate with fabulous flowers and exceptional dark cinnamon-brown bark. It is mildew resistant.
Indeed, I’ve seen it doing well at Wave Hill, the wonderful public garden in the Bronx, New York, where it displays pure-white flowers and wonderful bark. It is resistant to powdery mildew, which some crepe-myrtles are subject to. Actually, all the newer hybrids have been selected for their mildew resistance.

There are several crepe-myrtles growing at the Scott Arboretum of Swarthmore College (scottarboretum.org). Chuck Hinkle, a senior horticulturist there, recommends L. fauriei ‘Townhouse’ for its reliable hardiness to zone 6, mildew resistance and exceptional bark. He notes the white flowers are a bit smaller and bloom earlier than the hybrids.

‘Townhouse’ grows rapidly in the shape of a V with a rounded canopy. The profusion of white flowers appears on the branch tips, and the long dark-green leaves drape downward. The foliage turns a golden yellow in fall. It is a suitable street tree. If we have a brutally cold winter, it might die back to its roots but will regrow as a shrub. 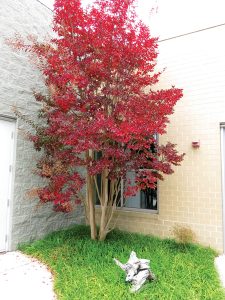 I’ve often admired the very handsome specimen of ‘Tonto’ at Chanticleer in Wayne (chanticleergarden.org). The flowers are fuchsia-colored; fall foliage color is maroon. R. William Thomas, the executive director, describes the bark as “exquisite.” It has done well there, but he still recommends selecting a warm microclimate for them. He says ‘Choctaw’ is also a good choice.

The recently introduced dwarf selections that grow no more than 3 feet in height are small enough to allow you to take measures to protect them from winter cold. Mulch them heavily with leaves, straw or another loose material to protect them from extremes in temperature. I have also noticed a dwarf pink-flowered cv. named ‘Pocomoke’ in area gardens. Other dwarf selections are the lavender ‘Centennial’ and red ‘Victor’.

The following are additional U.S. National Arboretum hybrids between L. indica and L. fauriei. They are all in the Native American Indian Tribe cultivar series (interestingly, one bears the name ‘Conestoga’).

It is best to investigate what your local fine nursery carries and recommends for your area.

Crepe-myrtles love full sun and heat. They do not like wet feet. All cultivars are drought tolerant and require no fertilizer.
Any shaping or pruning of die-back should be done in the spring. It is difficult to tell the extent of cold damage, if any, until growth begins (which is typically very late spring for this area, so don’t panic in April). Never prune crepe-myrtles in the fall or winter because that would compromise their cold hardiness. They bloom on the current season’s growth; thus, they can be pruned in the spring and will still flower normally that summer. It is important to remember that even if there is die-back from our winter temperatures, the plant’s roots often remain hardy and will survive, though with a more shrub-like habit. Some gardeners simply grow crepe-myrtle as a cut-back shrub.
To aid in hardiness, avoid excessive watering, pruning or fertilizing in the fall, all of which force new growth that will not have time to harden off and is likely to be killed by winter cold. It’s probably wise to avoid planting against south-facing walls, as they can radiate heat and could cause premature breaking of dormancy during brief warm spells in winter.
Crepe-myrtles can be grown as a bonsai. Hence, it is a plant that can be grown on a balcony or as a flowering companion to a collection of conifer bonsais.
Seeds germinate easily and often will flower within a single growing season, but seedlings will be variable. Named cultivars must be propagated with softwood cuttings.
Larger, full-sized plants are best grown as multi-stemmed specimens. Use them singly or in groups for the courtyard, patio or pool area. These plants can be limbed up to show off the bark year-round. Use colorful-foliaged groundcovers to complement their handsome bark and flowers.
Dwarf cultivars are useful for massing and make colorful accents to foundation plantings, or they can be included in the mixed perennial border.
Since they are tolerant of clay and a little salt, crepe-myrtles also grow well in limited soil spaces in urban areas such as along boulevards, in parking lots and in small pavement cutouts. They must be watered until they become well-established.
Beware: It’s also easy to overuse these vivacious shrubs! 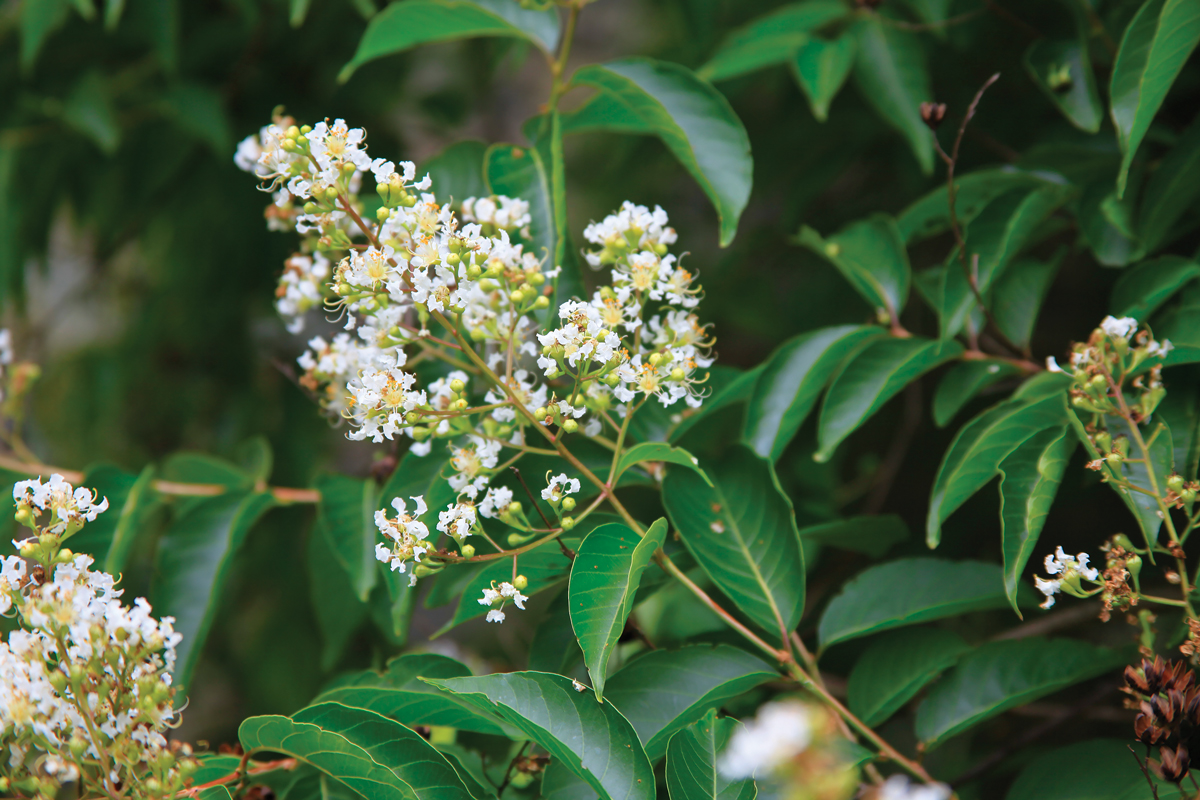