Most people view vacations as a break from cooking. But, visitors to Fairview Cottage, an Airbnb in West Hempfield Township, are inspired to cook, due in part to the bounty of the county, as well as the beautiful kitchen that is theirs to use.

The cottage on the farm that is owned by Carol and Pete Heth dates to the mid-1800s. For decades, various relatives of Carol’s lived there. When the Heths bought the farm, they continued to rent it out. When the last tenant moved out, they decided to let it sit vacant while they weighed their options. One idea was a bed-and-breakfast, so the Heths took advantage of a tour that was being sponsored by a local B&B association. Inn owners in the western area of the county encouraged them to move forward with the idea, explaining they often needed overflow options during the height of tourist season.

They proceeded with the idea of opening a B&B, editing it somewhat to become associated with a new travel phenomenon, the Airbnb, whose premise is “feel at home anywhere in the world.” For the next three years, Carol and Pete renovated and reconfigured what became known as Fairview Cottage. “And, I started collecting,” Carol says, referring to furnishings and accessories.

The Heths love to travel themselves, plus they own a home on the Outer Banks of North Carolina. Renting cottages for their annual family vacation in July, which typically involves more than a dozen children and adults, convinced her that designing a kitchen that cooks would be appreciated by guests staying at Fairview Cottage.

Over the years, she’s had her fill of ill-equipped kitchens and inadequate appliances. “Wherever we go, we like to cook, so those things are important to us,” she says, recalling a cottage on the Chesapeake that accommodated 16 guests but only had one tiny refrigerator, and another waterside spot that didn’t have a pot large enough for steaming even a few crabs.

So, Carol designed a kitchen that touches on those two important points. Moveable metal racks hold pots, pans and other necessities. A pantry is filled with dishes, glassware and utensils. Appliances include a large refrigerator, a dishwasher and a commercial range (plus coffee makers and a toaster). A gas grill is also available. An island does double duty as it provides a work area and seating for enjoying a meal.

The guestbook is filled with complimentary comments. “We loved cooking together,” noted a couple from New Jersey. “I loved cooking in that amazing kitchen,” wrote a guest from New York City. Another New Yorker thanked Carol for sending her to Central Market. Guests from Connecticut and Florida thanked her for the recipes she shared. Still others thank the Heths for the welcome gift they always provide: farm-fresh eggs. Guests who visit Lancaster on a regular basis have rented the cottage for Thanksgiving weekend and plan to prepare a holiday dinner for their parents in the cottage’s kitchen.

“When we first opened, I don’t think guests arrived with the intention of doing a lot of cooking, but once they saw what Lancaster County has to offer, many of them took advantage of what they could buy and where they could cook it,” she says. “Now, we’re getting guests who come solely to spend their vacations cooking.” In fact, Fairview Cottage has proven to be so popular that the Heths are remodeling another building on the farm and hope to have their second Airbnb open by late fall. 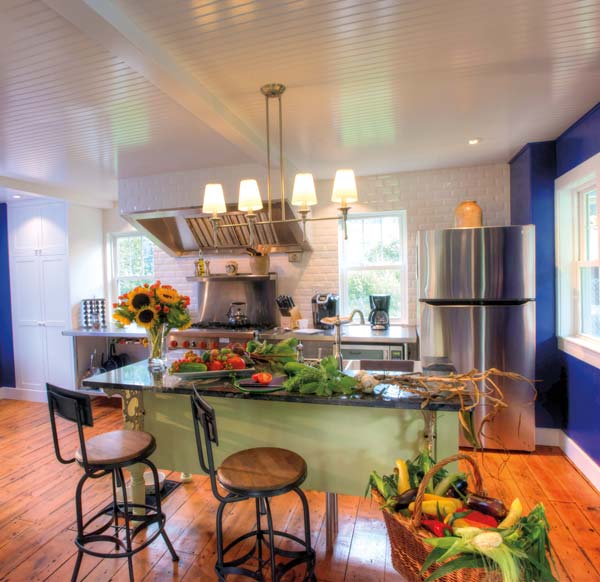 Taking a cue from ill-equipped and appliance-challenged rentals she has vacationed in over the years, Carol Heth designed a cooking-friendly kitchen for her Airbnb, Fairview Cottage.