Kerry Kegerise has breathed new life into a historic mill in Denver. Appropriately enough, as an events venue, Bear Mill Estate is where life’s special moments are celebrated.

Four years ago, Kerry bought the historic estate that dates to 1739. “It was originally called Bucher Thal, and at one time it stretched over 400 acres,” he explains. Several generations of Bears lived and worked on the property. In the early 1900s, the Eberly family became its owners. Then, a local doctor bought it, after which a couple from the Midwest, who operated an antiques business, owned it.

Kerry always loved the property. “I played there as a kid,” he says. And, he was appreciative of the fact that Denver’s residents have also maintained a special connection to it. Under the Eberlys’ tenure, the original grist mill served as an ice house, and many of the townspeople took advantage of the cold storage services the Eberlys provided. Additionally, the park-like grounds provided area residents with a place to picnic and enjoy nature.

Kerry opened a new chapter for the mill when he transformed it into a shopping destination that offered flowers on a portion of the first floor and antiques on the second floor.

At the invitation of Bill Donecker, Kerry had launched his floral-design business – Country Lane Flowers – at the Doneckers complex. Through Doneckers, he became involved in weddings and other special events. Now, as a seasoned floral designer and events specialist, Kerry noticed the area lacked venues that cater to smaller-scale events. He set out to fill that void and began scouting possible properties. The search was a frustrating one.

One day he looked across his front yard and viewed the mill in an all-new light. “I could do what I wanted right here,” he says of the lightbulb moment. He interviewed an architect and contractors and settled on Dwight Graybill of Cocalico Builders. “Dwight’s mantra – ‘It will build itself’ – was a little scary, but I learned to trust him,” Kerry says, at which Dwight interjects, “I almost lost him the first day.” According to Kerry, after day one, “We just really clicked.” Together, the two designed the venue (which would include a two-level, open-air addition) and the adjoining building that would house Kerry’s floral-design business, as well as a catering kitchen and restrooms. 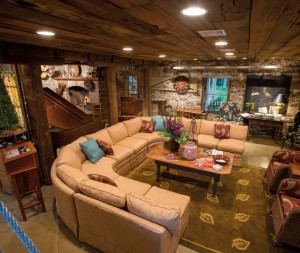 Kerry implemented his idea to transform the mill’s first floor (half of which was once a garage) into a welcoming gathering place. The ceiling is lined with reclaimed pecky cypress. Two of the three posts are original to the space (Ben Graybill created the look-alike replacement). Kerry’s ploy obviously worked. Visitors to his home tend to end up at the mill. Note the reproduction Indian door and the original fireplace.

East Cocalico Township and Denver Borough approved the plans in October 2014. Kerry and Dwight established a May 1 target date for completion of the project. The first order of business was to open up the first floor of the mill (Kerry’s shop occupied one half, while a garage filled the other). Kerry’s vision was to have the first floor resemble a comfortable and welcoming living room. The bones were there, including centuries-old beams, posts and a fireplace. Refurbishing the walls and ceiling was critical to creating the right mood. In Dwight’s estimation, drywall and new wood wouldn’t cut it. “We thought about wainscoting, but that wasn’t the look we wanted either. We wanted it to look as if it had been there for 200 years.”

So, Dwight began working his “sources” and came across a supply of pecky cypress, which provides an aged look due to the long and narrow cavities that result from a fungal infection that disappears once the wood is cut. “I thought the guy was saying ‘piggy cypress,’” Dwight says of his Amish source. “So, that’s what we were calling it. When I went back for more, his son corrected me.” The wood was sourced from a chicken house in Lebanon County.

Dwight also worked his magic to create innovative enclosures for the mechanicals on both floors. Again, using aged wood, he designed enclosures that mimic period furniture. He also designed and crafted entries that resemble Indian doors, which once protected homesteaders from attackers. “Dwight also found all the specialty hardware and latches that were used throughout the mill,” Kerry points out. “The details are what define this project.”

The two-level, open-air addition is constructed of steel and concrete. It provides views of the pond, millrace and the creek that meanders across the back of the property. Dwight and his team completely rebuilt the walls of the millrace. “It was a mess,” Kerry recalls. “The walls had collapsed into the water.” 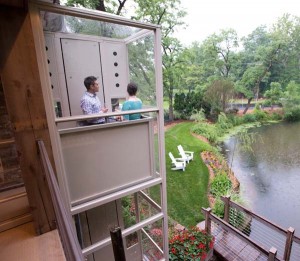 The glass elevator provides views of the pond and countryside. A newly constructed footbridge transports guests from the pond-side lawn area to the tree-filled backyard, where a farm-to-table (former White House Chef, John Moeller, provided the menu) fundraiser was held in late August to benefit the Ephrata Public Library. 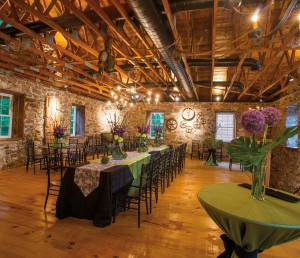 The second floor serves as the venue’s ballroom. Artwork consists of implements that are original to the mill. Note the tin chandeliers crafted by Charles Messner. Claudia Himes of Special Occasions & Queen Street Linens is the exclusive linens supplier for Bear Mill. Rettew’s Catering is the preferred caterer for the venue. Note Kerry’s early-fall floral designs.

Recycling also played a role in the addition. Again, Dwight was able to “recycle” some steel he had bought (it was originally sourced from a tower that was taken down in Brooklyn, New York). The steel was then wrapped with barnwood in order to echo the period look. A glass elevator transports guests from one floor to the other. “That has proven to be a real hit with guests,” Kerry says.

The second-floor “ballroom” continues the mood Kerry set on the first floor. The red sandstone walls are complemented by hit-or-miss-style yellow pine floorboards. Overhead, Charles Messner’s handcrafted, punched-tin chandeliers dazzle. Artwork comes courtesy of finds that relate to the mill’s history. Milling implements decorate one wall, while 200-year-old clay roof tiles – set into a frame – define another. “Dwight surprised me with that one,” Kerry says.

Dwight’s next project for the space is to create custom farm tables. “We experimented with various table styles, and we feel the farm tables will best complement the style and period of the building,” Kerry says. 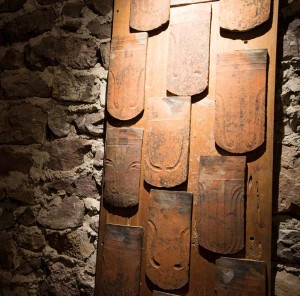 Clay roof tiles that are original to the property provide more artwork for the ballroom.

Decorating the mill has been a labor of love. The first floor bar is from the Mountain Springs Hotel in Ephrata. Stained glass is original to St. John’s UCC in Denver. Quite a few of the furnishings are from the nearby Black Angus, while others reflect purchases Kerry made during his travels. His grandfather’s paint ladder hangs from the ceiling in a corner of the first floor. “Townspeople have been giving me things, too,” Kerry reports. As has Bill Donecker. “He’s always calling and saying, ‘Kid, I found something you may like,’” Kerry notes. That Doneckers touch has prompted many visitors to note the feeling of being back at the iconic store. “I get ‘I feel like I’m at Doneckers’ a lot,” Kerry says.

There is already a change in the air. Kerry is phasing out his retail floral business in order to concentrate exclusively on floral designs for Bear Mill events. With space opening up in the cottage, he is going to be launching a private-label wine venture. “We’re going to become a Pennsylvania Wine Destination,” he says. “We’ll have limited retail space and will concentrate on supplying our events with wine. Plus, we’ll have wine tastings and food-pairing events throughout the year.” Fortunately, Dwight is a wine enthusiast and has built his fair share of wine cellars for customers.

“This has been an exciting project,” Kerry says. “Some days it was like Christmas around here: I didn’t know what to expect. I’m very proud of the fact that we used local businesses.” As for Dwight, he says this was one of those once-in-a-lifetime projects. “To have the same taste as the customer and to be given the opportunity to be creative and not have constraints is something you only dream about,” he remarks. “This has truly been one of the most enjoyable projects I’ve ever been involved in.”

The project will be honored later this month by the Historic Preservation Trust, which is presenting Bear Mill Estate with the Restoration/Adaptive Re-use award. Ninety-year-old Charles Messner will also be honored with a Lifetime Achievement award. 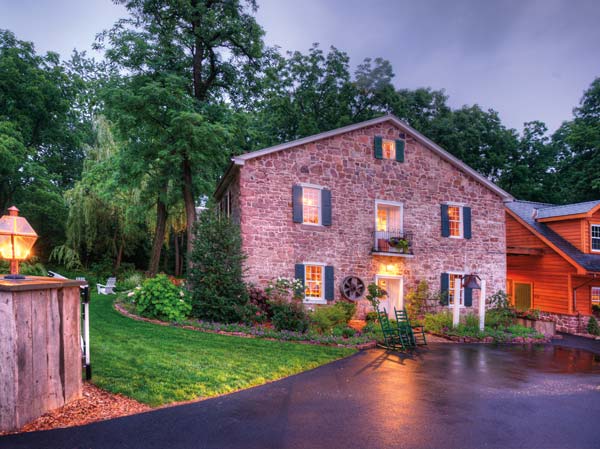 Denver’s storied Bear Mill is now a venue that is geared to smaller-scale events. The newly constructed cottage that is adjacent to the mill is home to Kerry Kegerise’s floral-design studio, a catering kitchen, restrooms and soon to come, a wine venture. Bear Mill will be receiving the award for Restoration/Adaptive Re-use from the Historic Preservation Trust later this month.