The second most popular word when describing a positive experience at a restaurant or bar (behind quality) is fun, according to business analysts. You don’t need an MBA to notice the trend – fun is where it’s at. I’m not talking about things to do with the kiddos. Let the little ones have their Tiny Town and Hands-on House … I’ll throw axes! 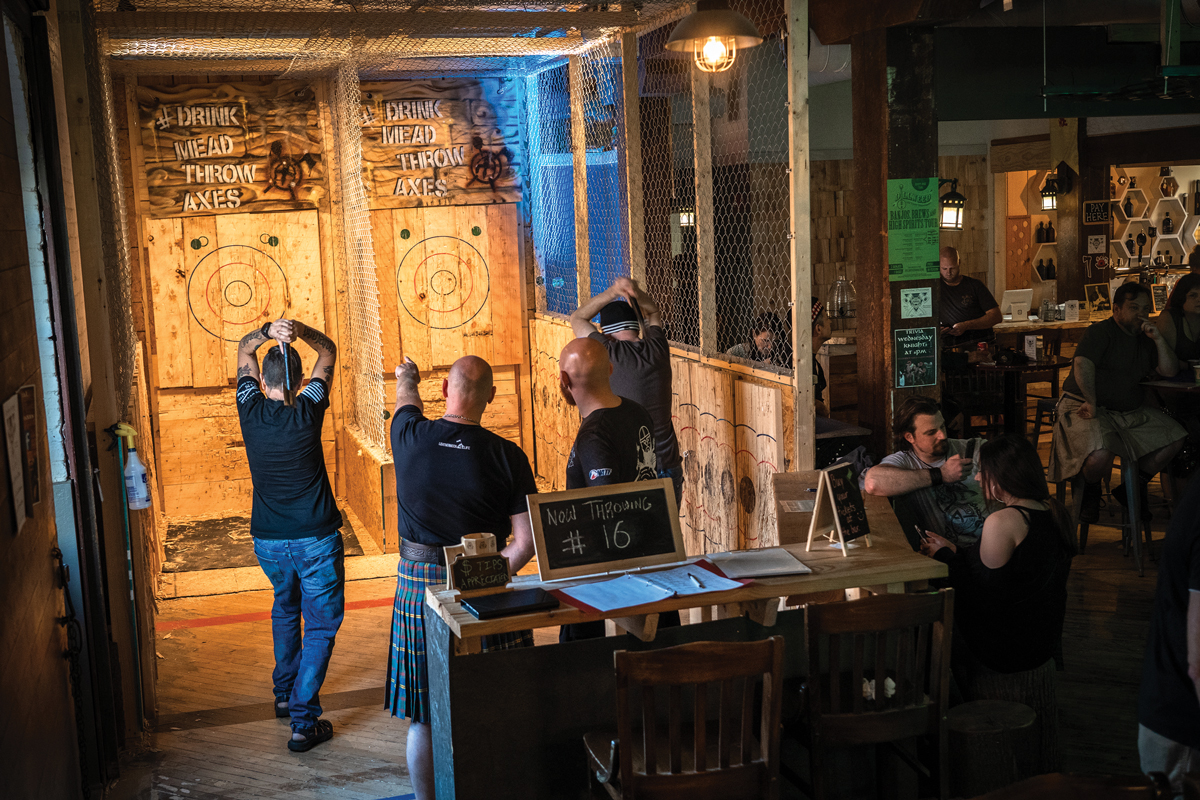 The Holmgang – or axe range – at Meduseld Meadery has become an attraction in itself. The range complements Meduseld’s Viking/Middle Earth vibe in which mead is the drink of choice. Photo by Nick Gould.

When Meduseld Meadery added a pair of axe-throwing lanes to their honey spot last year, I was one of the few Lancastrians who did not think the owners had lost their minds. I spotted the trend of axe throwing in Brooklyn in 2017 and soon learned of an established scene in Philly. So, it was not a stretch for the pastime to make its way to Lancaster – a city described as a “livable Brooklyn” on the chart of what is hip. Now, Lancaster has two places to throw.

The blade-throwing trend is said to have started in Canada, specifically Toronto, where bartender Matt Wilson is credited with opening the first commercial indoor arena for axe throwing in 2011. His league, the Backyard Axe Throwing League (or BATL, BATL axe … get it?), started competition play, and the visionary soon had nine locations in Canada and one in the U.S. Other venues and leagues soon followed. In 2017, travel writer Andrea Cooper predicted that axe-throwing bars would pop up everywhere in the United States. She hit the bullseye with that one!

Mead is a honey-based spirit residing somewhere between beer and wine, and when owners Willie (meadmaker and spokesman) and Julie Wrede, Jeanette and Alfonso Soler, and Duro Rajkovic opened the Meduseld Meadery in 2017, they knew they wanted to expand almost immediately. The axe throwing kind of just worked its way into the mix. And, it fits Meduseld’s Viking/Middle Earth motif.

“People love it, and we always have a line,” Willie shared with me when I stopped in to throw a few axes shortly after completion of the lanes in 2018. “We always thought the axes would just be an addition, but it turns out they are an attraction.”

The Holmgang, a.k.a. axe range, is operated on a first-come, first-served basis. My suggestion from experience is either get there as soon as the doors open or wait until later in the evening to avoid a longer queue. 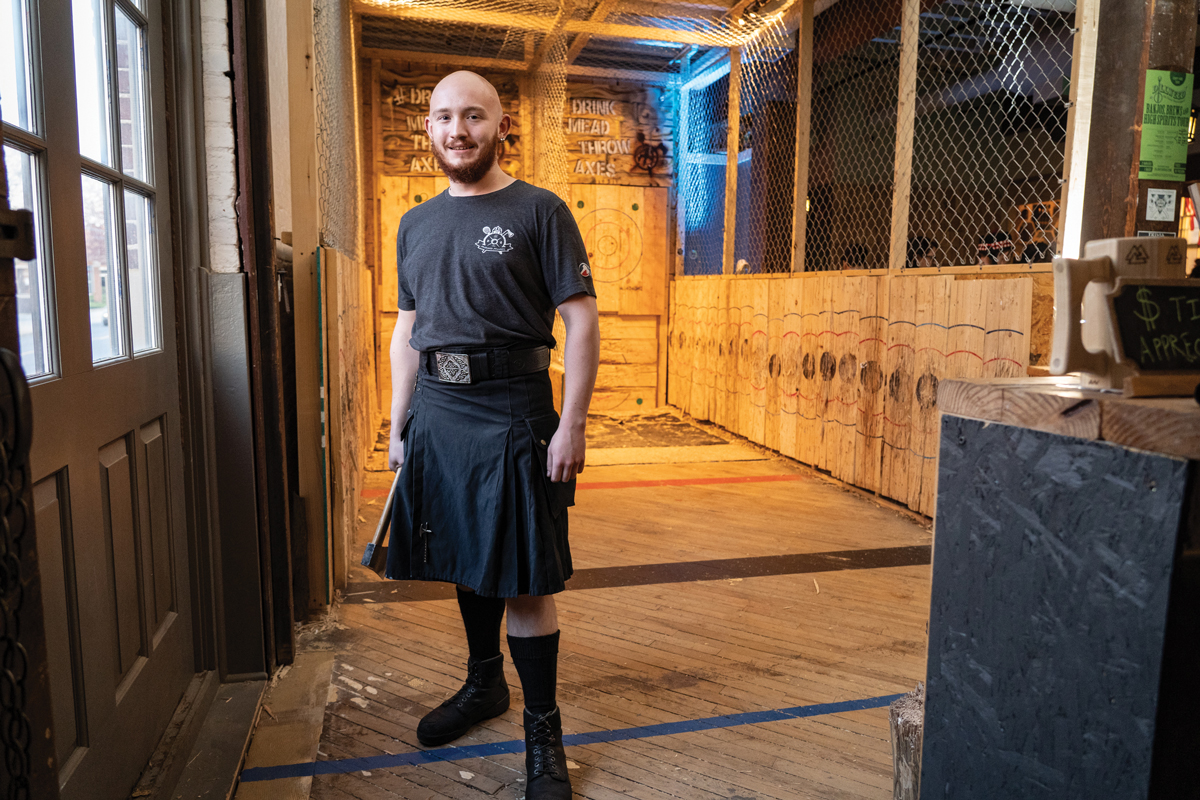 Kilts were widely seen at Meduseld Meadery on April 6 – it was National Tartan Day. Photo by Nick Gould.

Meduseld follows the safety and competition rules of the National Axe Throwing Federation (NATF), which was formed in 2016 with the “vision of creating a standard rule system to enable broad and accessible competition amongst players.” With over 6,000 members, NATF leagues and competitions dot the U.S. Throwers aim to stick an axe in the center of a three-ringed bullseye for five points. The middle ring counts three points, and the outer ring counts one. There’s also a “clutch” shot, but that is better left until novice level is surpassed.

In case you’re questioning the other safety factor – mixing alcohol and sharp objects – like any other reputable watering hole, the folks at Meduseld keep a close eye on intoxication.

All About the Blades

“It’s really just the shoulder and figuring out your release point,” said franchise co-owner Robert Grote after throwing a bullseye when I visited the newest Stumpy’s Hatchet House location in Lancaster. “You don’t have to whip it. The biggest thing our coaches work on [with customers] is where to stand.” 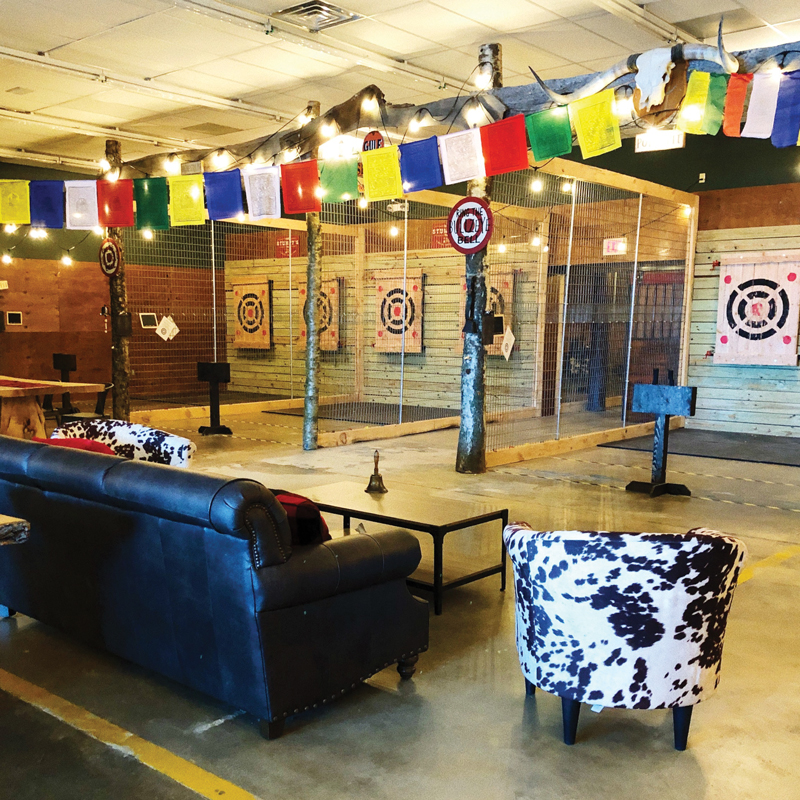 Stumpy’s Hatchet House grew out of a backyard pastime enjoyed by friends Stuart and Kelly Josberger and Mark and Trish Oliphant. The New Jersey residents recognized a business opportunity and opened their first Stumpy’s in 2016. Since then, eight locations have opened, with another 20 set to open by year’s end. The Lancaster location opened in February. Photo by Wendy Royal.

He’s right. Once I find the perfect distance from the target for my height and wingspan, I compensate for the rotation of the hatchet and hit two bullseyes of my own. (It also doesn’t hurt that I have some lingering muscle memory from when I was a kid and had a friend who lived in the woods around Pequea Creek where hatchets, wrist rockets and blow guns were a pastime.)

Scoring is a bit different here with the chance to count anywhere from one to five or even seven points on a single throw. Some folks like to play S.T.U.M.P.Y., which is like HORSE in basketball. A league is in the planning stages right now, which could allow for individual or team competition. Whether double- or single-handed, all throws must be overhead. Throwers must adhere to a set of rules for throwing, retrieving and overall behavior.

At Stumpy’s, the alcohol is BYOB, which means any beer or wine is welcome, but no spirits are allowed.

Despite not serving alcohol, Stumpy’s still resembles an awesome tavern you might wander into in the great North. There’s a couple of bar-ish formations, which are mostly used as judge’s stations. Tables and chairs for guests top each lane. There’s even a lounge-style waiting room (to be used either before or after throwing), which may soon get some use as a music venue. On a side note, Grote’s got an in with some local musicians if he needs them. His son is Rob Grote, front man for The Districts, who are prepping for a European tour this summer.

Insider tip: Saturdays are busy, so go on a weekday. Also, Stumpy’s takes reservations – call ahead or book online!

And, ladies, don’t think axe throwing is a testosterone-driven event. Demographics are showing that just as many women are into axe and hatchet throwing as are men.

I started this story believing axes and hatchets were the same thing, but they are not. There is a bit of a difference between the axes at Meduseld and the hatchets at Stumpy’s. Meduseld axes are more rustic – for the lack of a better word – and come in 1-1/4-pound camp axe or 2-1/4-pound felling axe varieties. The hatchets at Stumpy’s are sleek and sharp and remind me of something that would be thrown in an Olympic competition, if fixed blade-throwing was an Olympic sport.

Like axes and hatchets, Meduseld and Stumpy’s might seem similar. They’re both really cool spaces, but each is unique. They have their own individual style, but they both provide a lot of fun … when the kiddos are with the sitter.
Meduseld Meadery
252 Harrisburg Ave. 717-208-6144 or meduseldmeadery.com

The Holmgang – or axe range – at Meduseld Meadery has become an attraction in itself. The range complements Meduseld’s Viking/Middle Earth vibe in which mead is the drink of choice. Photo by Nick Gould.