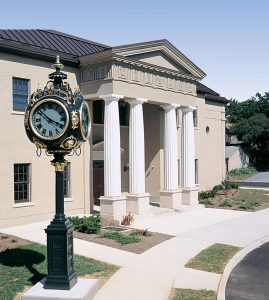 Lancaster County’s history of watchmaking is not solitary in its importance. Cities like Waltham, Massachusetts, and Elgin, Illinois, rivaled Lancaster’s reputation for watchmaking. However, the movement of this “uniquely American way” of watchmaking gained heady steam here and created an industry that’s still respected by collectors and historians alike.

Lancaster in the late 1800s was a mechanized community. Industry flourished. Large- and small-scale farmers made their way to the city to meet crowds of buyers who made the trek from surrounding towns and cities to purchase tobacco. Legislators traveled by rail to our nation’s capital to expand our government west and repair the divide of the Civil War. Deadlines and schedules needed to be met, most of which hinged on the reliability of a good timepiece.
“What’s happening in Lancaster in the 1860s, 70s and 80s is what is happening in other communities where you have access to a market, raw materials and labor. This is the development of the watch industry in the American tradition of watchmaking,” explains Noel Poirier, who is the director of the National Watch & Clock Museum in Columbia, which began a year-long celebration of it 40th anniversary in November. 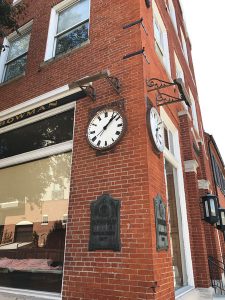 Lancaster County watchmaking has its roots in three entities: Adams & Perry Watch Manufacturing Company, Hamilton Watch Company, and Ezra Bowman.
Adams & Perry began a short and turbulent tenure in May 1874, which – due to financial hardships and disagreements between founding members – became the Lancaster Watch Company and later Keystone Standard Watch Company. (Lancaster School District’s high school namesake, J. P. McCaskey, was an original board member of Lancaster Watch Company.)
Keystone Standard operated for less than a decade, but it became the foundation for one of the most recognizable watch companies in the world: Hamilton Watch Company.
Founded in 1892 on the same site as the preceding manufacturers at 901 Columbia Avenue, Hamilton grew to prominence in 1912 with a series of pocket watches devised to standardize the railroad industry’s timekeeping. Dubbed “the watch of railroad accuracy,” Hamilton used the platform to land supply contracts with the U.S. Armed Forces at the outset of World War I.

All the while, Ezra Bowman was proving his father wrong by finding a living in watchmaking. Bowman, who initially made his own watches, opened his Lancaster City shop in 1877 and became a successful retailer and wholesaler of watches. He also shared his love of watchmaking with students and eventually became the eponymous association of the Bowman Technical School, which operated with national prominence – later under the leadership of his son, John – at the corner of Duke and Chestnut streets until 1992.
“The decline in watchmaking in Lancaster is like the decline anywhere else; there was increased foreign competition,” says Noel. “What really kills mechanical watchmaking in Lancaster County is the quartz revolution in the late 1960s and early 70s.”

At its zenith, quartz watchmaking was mass produced primarily by Asian companies. The products were less expensive and did not rely on springs like mechanical watches, which required winding and attention. With quartz watches, a battery sends an electric charge through the quartz crystal, which vibrates at a given rate and allows the watch to measure time. The ease of no winding grew popular.
“People wanted quartz watches … like they want smartwatches now,” says Noel. “Companies like Hamilton were not positioned to do that kind of work.”
Eventually, Hamilton closed the Lancaster facility and moved its headquarters and production to Biel, Switzerland. The Hamilton legacy remains under the direction of the Swatch Group. “Technically, Hamilton hasn’t gone away. It’s just changed where it is produced,” Noel explains.
Brent L. Miller Jewelers & Goldsmiths is the sole authorized dealer of Hamilton watches in the area. To celebrate Hamilton’s 125th Anniversary, the museum showcased several pieces from its collection, as well as a scale model of the factory building and pieces developed for avionics, at a special event that was held at the store last fall. 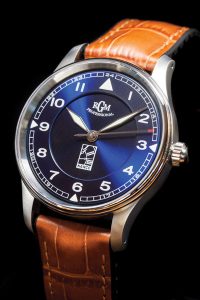 The art of watchmaking in Lancaster County is not confined to museums. Out of a former bank building at 801 West Main Street in Mount Joy, Roland G. Murphy is turning out luxury timepieces manufactured and assembled in-house. From movements to dials, these ornate timepieces straddle the line of function and fine art. RGM Watch Co. celebrated its 25th anniversary last year.
“I want to build watches like they used to be built, when people took pride in what they did and they built things to last,” says Roland, who trained at Bowman and worked for Hamilton in Lancaster.
Roland Murphy is bringing back what Noel Poirier calls a “uniquely American way” of watchmaking. Indeed, prior to watchmaking industrialization, which spawned companies like Adams & Perry, the business was a cottage industry. “The watchmaker was an assembler of parts that he purchased from other parties,” Noel continues. “What was happening 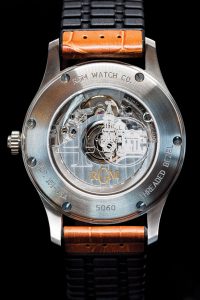 in the United States was all the operations were happening under one roof.”
Ninety percent of the components for RGM’s watches are manufactured in-house or come from Lancaster County craftsmen. There are 20 different RGM watch models. Part of The Pennsylvania series, the PS-801-E features a hand-cut guillochéd dial with Arabic numerals and blued steel hands incorporating a keystone. This model, about mid-range in price for an RGM watch, starts at $9,700. Specialty and commemorative watches can fetch upwards of $95,000. There is no plating or coating on an RGM watch. “We make specialty mechanical watches. For me it is important that they last and can be refinished,” says Roland.
“There really isn’t anyone who is producing watches like RGM,” adds Noel.

Back at the Watch & Clock Museum, Noel says their collection of Lancaster County timepieces is a point of pride. Over the years, they’ve become the unofficial historian of the Hamilton brand.
“We take our responsibility to our home community very seriously, as it fits into our overall international mission,” he concludes.