Although Funck’s has only been open for six months, it’s quickly become a favorite in the local dining scene.

Owned by brothers Alan and Matt Funck, the Leola location joins the original Funck’s in Palmyra, which opened in 1969, and another Funck’s just south of Fort Indiantown Gap.

Alan describes Funck’s as a casual restaurant that focuses on craft brews. “But, we’re more than a brewpub. People do come here for the craft beer, but we’re also family-friendly and inviting. We see a mix of age groups, from young adults to their parents and sometimes grandparents,” he observes.

The Leola location, which formerly housed Batten’s Corner and Leola Family Restaurant, underwent extensive renovations before it made its debut. An addition houses an indoor/outdoor bar with seating; a new patio provides outdoor dining to the mix. “Those familiar with the other two restaurants that were here don’t recognize the place,” he remarks.

Funck’s has an upbeat vibe. As guests enter the lobby with its expanse of windows and seating area, they’re greeted by a sleek modern fireplace. The clear-coated concrete floors and open ceiling lend an industrial feel. “We want the entire restaurant to flow well. People walk in the door and really love the way it feels,” Alan says with a smile.

Funck’s seats 240 indoors and about 200 on the patio. Tables and booths are not crowded together. Booths line walls of a bar area, and there’s also a separate dining area that has several windows. Around the corner from the bar is the indoor/outdoor dining area featuring a bar, large screen TVs, hi-tops and a fireplace in the corner. Garage doors roll up during warm weather.

The spacious patio features comfortable seating. Two fireplaces, two firepits, tiki torches and landscaping add to the ambience. “We’ll keep the patio open as long as the weather cooperates. Even if it’s closed and we have a nice day, we can roll up the garage doors in the indoor/outdoor bar/seating area,” he explains.

While there isn’t a banquet area, Funck’s can accommodate small groups for gatherings such as birthday or anniversary parties.

According to Alan, the eclectic menu offers “a good mix of options.” Top sellers (for lunch and dinner) include burgers, wings, meatloaf and the fried chicken that’s made using the original recipe crafted in 1969. Soups include baked tomato crock and chicken corn rivel, a Pennsylvania Dutch classic. There are also flatbreads, salads, sandwiches such as pulled pork and turkey pretzel melt, Baja fish tacos, as well as pasta, steak and seafood entrées. Note to breakfast lovers: the menu is available 6 a.m.-2 p.m. daily. There’s also an array of tempting desserts including hand-dipped ice cream, half-baked chocolate chip cookie and chocolate cake with peanut butter frosting.

In addition to menu items, there are also a number of seasonal specials. The kitchen staff utilizes locally sourced ingredients such as produce as much as possible. Additionally, the menu itself is periodically revamped. “Our menu has evolved. We did a major overhaul in December 2013, and we’ve made a few changes since then. We try to change it up and keep it fresh,” Alan explains.

The 2013 overhaul was a precursor to a shift in Funck’s focus that occurred in early 2014. “We were strictly a family restaurant for decades, and then we converted to the craft beer concept,” Alan explains. “Palmyra was the first restaurant to make the switch, and that was February 2014. It involved a major remodel including a new bar and dining area and 56 drafts on tap.”

The Leola restaurant has 115 beers on tap, with the focus on American craft brews. Plenty of local and regional craft breweries are featured, as well as some mid-Atlantic and national names. “It’s always changing – sometimes we only have a keg or two of a particular beer,” he notes. “We have some customers who enjoy trying different beers.”

For those who love pumpkin, be sure to stop in this month for “Pumpkin Wars.” A variety of pumpkin brews will be featured as well as some fun and games (check the website for details). 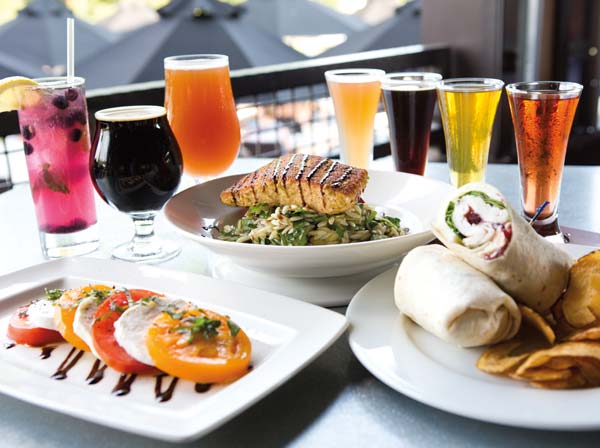 Funck’s menu features salads that focus on local produce (such as heirloom tomatoes), wraps (pictured is the turkey/cranberry) and entrées such as the Bronzed Salmon, which features a sweet and spicy brown sugar/chipotle pepper rub. The beverage selection is equally as diverse.