The ‘80s were all about doing things on a large scale. On the home front, huge windows, two-story great rooms, humongous kitchens and gargantuan baths ruled! Bruce Gingrich faced such a scenario when he was asked to transform a “busy” bath into a Zen-like retreat.

A lot of those ‘80s homes are now hitting the market. After all, by now their original residents are probably empty nesters who are ready to downsize or perhaps move to retirement communities. In neighborhoods where that holds true, ‘80s-era homes are being remodeled and redefined in order to bring them into the 21st century.

That premise is what took New Holland-based designer/builder Bruce Gingrich to Montgomery County during the height of the Great Recession. “There was nothing on the schedule,” he recalls. “It was scary. Then, I got a referral call from a couple in Ambler.”

Bruce took the appointment. The job involved remodeling a mudroom. “I figured I’d lose money on it,” he says, referring to travel time and the tab for gas, “but, at least I’d have a job.” He also provided jobs on a local level, as all the subs were based in Lancaster County.

Today, Bruce is very thankful that he took that job. Homeowners Sandra and Tom had just purchased their ‘80s-era home and planned to completely remodel it from the inside out. The very traditional house in no way reflected their urban/contemporary taste. “Over the past six or seven years, we’ve been slowly transforming the house,” Bruce explains, referring to exterior work and remodels of the aforementioned mudroom, all the bathrooms and a powder room. “We still have a lot to do, including the kitchen,” he notes.

Other clients from the neighborhood have come calling, as well. “I got three nice jobs from that one client,” he says of a kitchen, an attic suite and a revamped front entrance that came his way. “Each client refers to me as ‘my’ contractor,” he laughs. 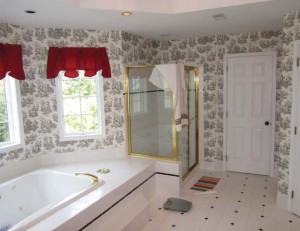 During their initial consults, Sandra impressed upon Bruce that she “is not into clutter.” With that said, you can imagine her reaction to the fact that all the walls in the very large master bath were covered in toile-patterned wallpaper. “It kind of made you dizzy,” Bruce says. The cabinetry was very Euro (not in a good sense), and one side of the room was dedicated to a boat-sized whirlpool tub and a gold-trimmed shower. “To this day, I’ve never met anyone who used those whirlpool tubs on a regular basis,” he remarks. 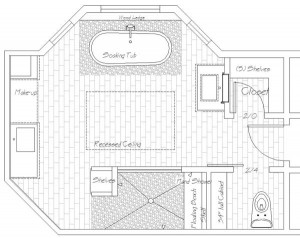 Bruce also had a problem that most remodelers would love to have: “The challenge was too much space,” he explains. On top of the generous amount of square footage, the ‘80s-style tray ceiling made the room all the more cavernous. “The goal was to create more symmetry,” he shares.

From a design and aesthetics perspective, spa-like was the goal. That was achieved with a palette of soft, natural colors. The dark finish of the his-and-her vanities and the dark-bronze tile with its wood-like texture serve to “anchor” the room. The re-configured tray ceiling that is accented by a contemporary lighting fixture, updated the room. The water closet’s entrance is also Zen-like, as frosted glass was used to create a sliding “barn door” that provides both privacy and a sense of light. Radiant heat, which operates via a programmable timer, warms the limestone floor.

Repeating certain design elements added to the flow of the room. For example, stone “rugs” cover the shower floor and lay beneath the soaker tub. The granite that tops the vanities was used as an accent throughout the room, and wall caps for the limestone wainscoting match the color of the vanities. 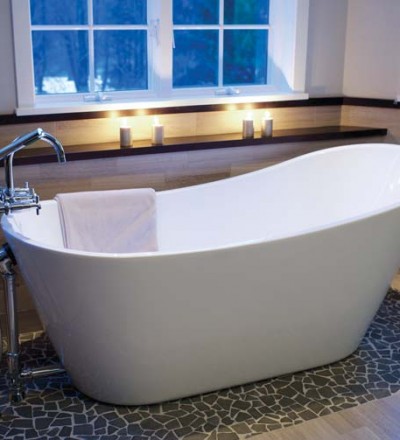 The soaking tub rests upon a stone rug. The design is repeated on the floor of the shower. 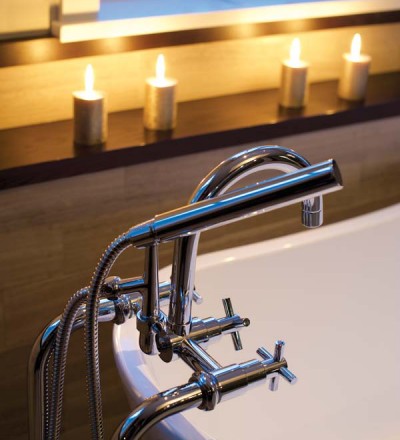 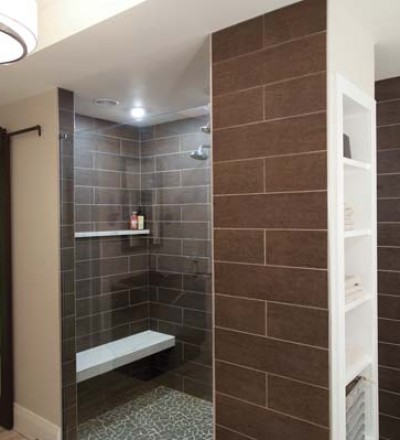 The bronze tile that comprises the walk-in shower has a wood-like texture. The tower provides added storage for towels. Note the custom glass/wood sliding door that provides access to the water closet. 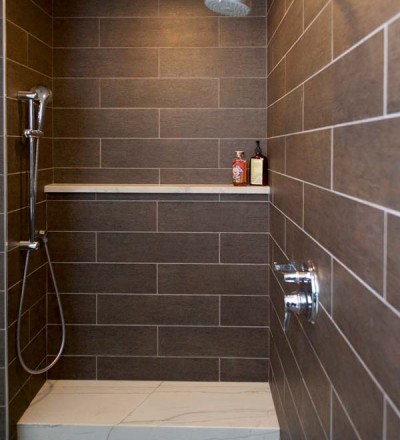 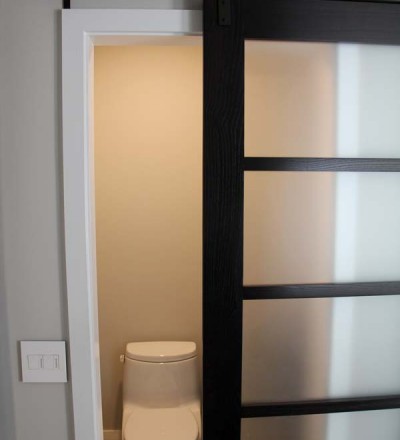 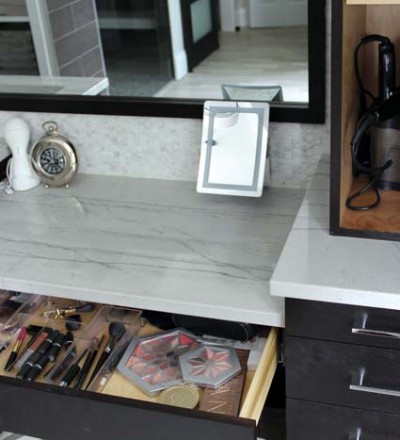 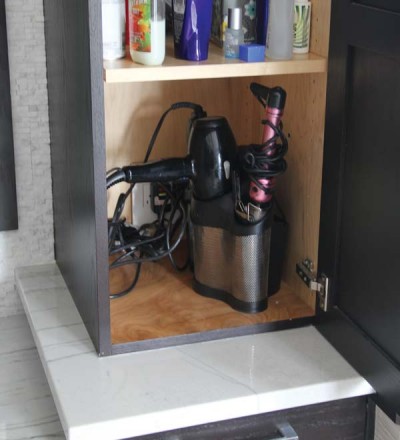 Outlets located inside the cabinets help to keep the bath clutter-free.

The no-clutter decree was addressed by hiding outlets inside closets/cabinets, providing plenty of storage (including a walk-in linen closet and shelving inside the tower that is adjacent to the entrance of the shower) and mounting the lights onto the mirrors.

Bruce names lighting as being a favorite aspect of his design work. He traces his lighting expertise to his college days at Millersville University, where he was an industrial arts education major. “I worked my way through college,” he says of serving on the lighting crews of area theaters, including the Fulton. In the end, he decided to bypass teaching and join the business that his father, Glenn Gingrich, founded in 1965.

This project represents the first time Bruce has entered a design contest on the local level since the 1990s. And, he came out a winner as it  took top honors in the bath-remodel division in last year’s Remodelers Awards of Excellence, which is sponsored by the Remodelers Council of the Building Industry Association of Lancaster County. “It feels good to be honored by my peers,” he says. 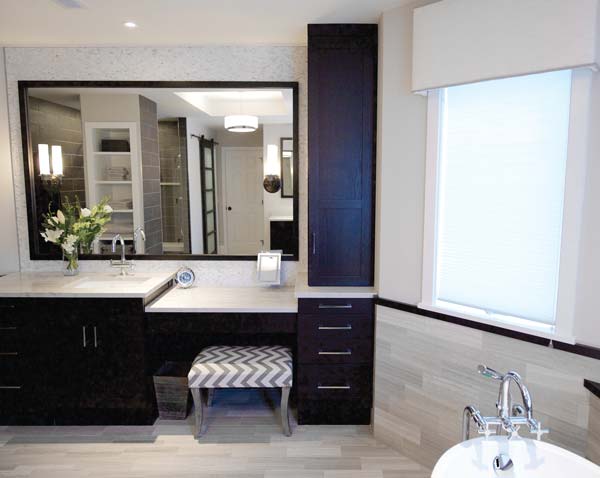 The generous dimensions of this master bath allowed Bruce Gingrich to design his-and-her vanities that are situated across the room from each other. Sandra’s vanity includes a hair-and-makeup area that is supported by plenty of storage, which helps to keep the area clutter-free.