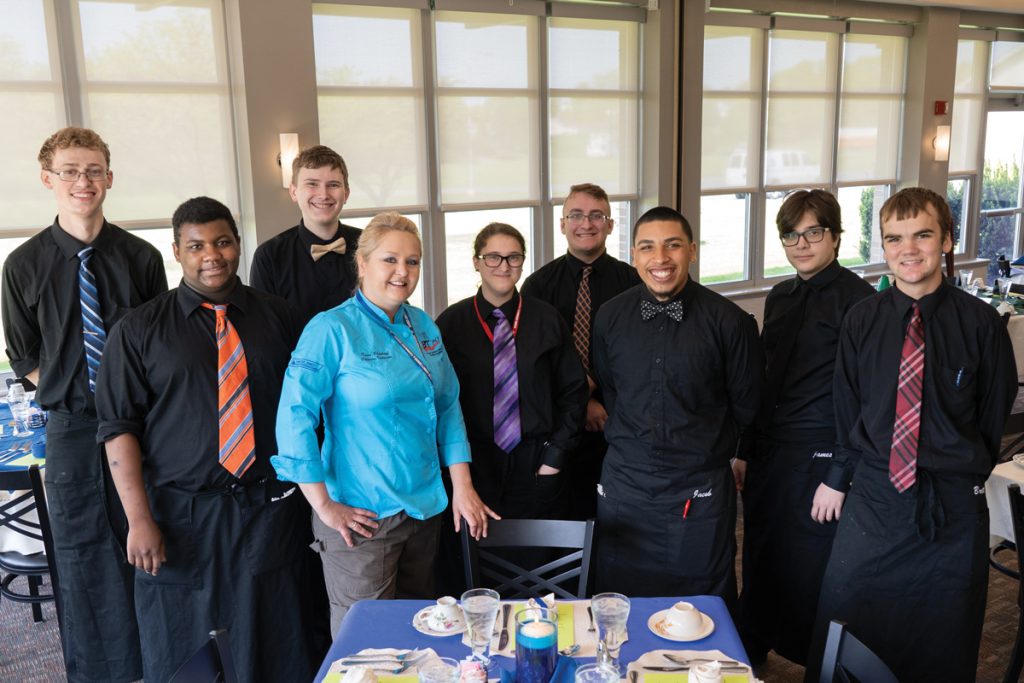 Located at the Mount Joy campus of Lancaster County Career & Technology Center, this student-run restaurant and bakery serve as a training opportunity for the county’s high school students who are preparing for culinary and pastry arts careers.

Lately, it seems as if new restaurants are opening at lightning speed in Lancaster County. Those restaurants need to be staffed. Fortunately for Lancaster, talent is being trained right in our own backyard thanks to the culinary and pastry arts programs that are offered to the county’s high school students through the Lancaster County Career & Technology Center (LCCTC). David Smith, the principal/director of LCCTC’s Mount Joy campus, explains that high school students contemplating such career paths can enroll in the half-day introductory curriculum their junior year and then enroll in the full-day program during their senior year. “The half-day culinary arts class provides students with an opportunity to determine if they want to pursue a career in the culinary arts,” he says. During the 2017-18 school year, 40 students were enrolled in the culinary arts program, while 25 were enrolled in the baking and pastry arts program. 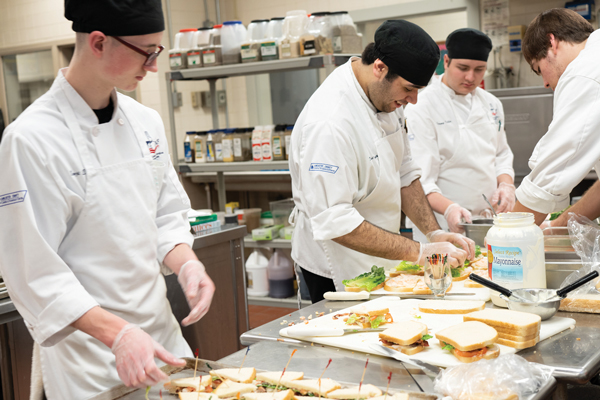 The curriculum mimics the fast pace of the industry. Chef Tara Zhookoff, culinary arts program instructor, explains that during the first month of the school year, students focus on earning their ServSafe, food safety certification.
The restaurant and bakery then open to the public the first week of October and operate through early May (they are closed during holiday/summer breaks, snow days, etc.). Infusions has its own entrance at the Career & Technology Center. Guests are greeted by a host/hostess and then seated. The dining area is bright and airy. Tara’s mother, Drema Shireman, has decorated it with mementos from her travels, as well as with food-inspired art.

High Tea is served Tuesdays, with seatings available at 11 and 11:30 a.m. Cost is $15 per person. On Thursday and Friday (Wednesday is added later in the school year), students prepare a three-course prix-fixe lunch menu. Cost is $12 including beverage.
Tables are topped with linens. Tara points out that ironing the linens and learning how to fold napkins are part of the students’ training. “They learn every aspect – front of the house and back of the house. There’s also a co-op opportunity with local restaurants. When students graduate from our program, they’re well prepared to step into a career in the culinary field. Some students go right into a culinary career while others head to some of the top culinary schools,” she says, referring to such schools as Johnson & Wales and the Culinary Institute of America.
Tracie Gotshall, baking and pastry arts instructor, appreciates that “the dining room is a hands-on opportunity for students to learn and hone their skills. Not every CTC in the state is like ours; our full-day program gives the instructors an opportunity to get to know the students.” 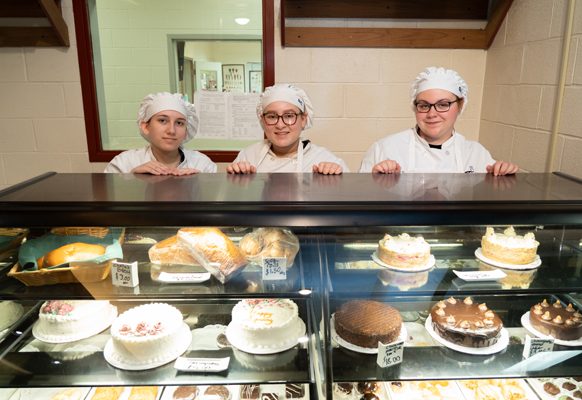 Pastry Students: Jaclyn Fox: will be joining the military. Nevelise Crespo: will be attending YTI. Samantha Howe: plans to find a job in the industry. 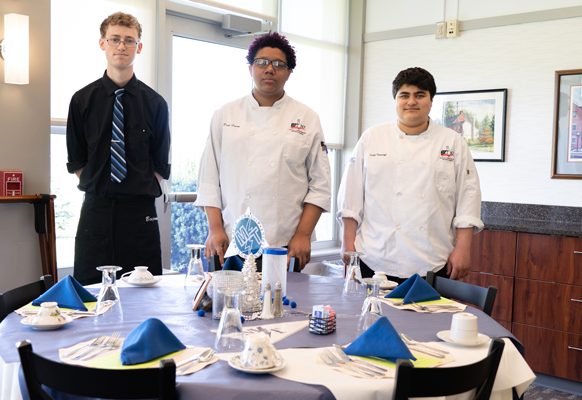 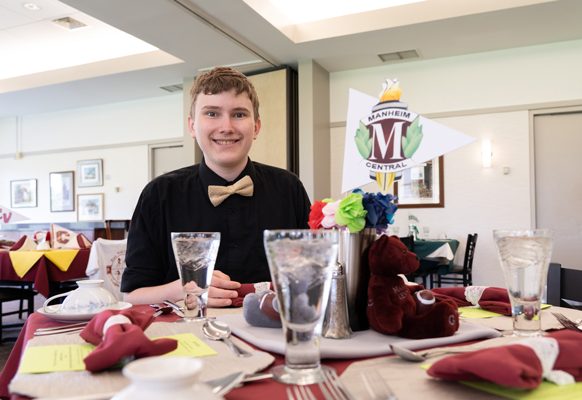 Dakota Ramsier: will be attending HACC; goal is to take courses related to business and the culinary arts. 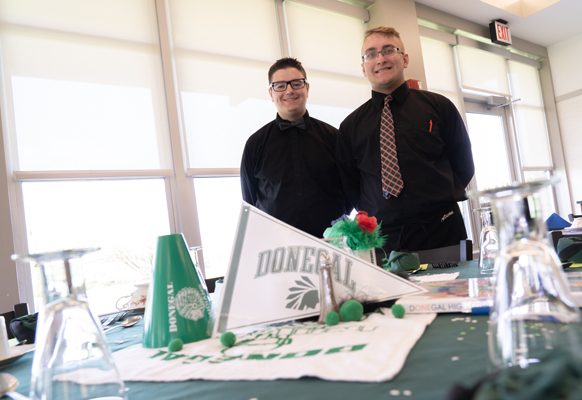 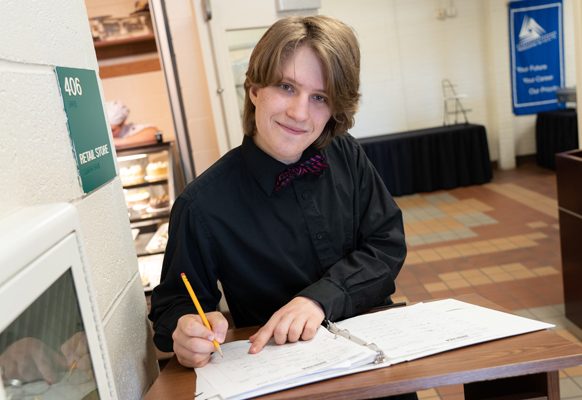 Robert Frampton; plans to work in the industry and attend HAAC. 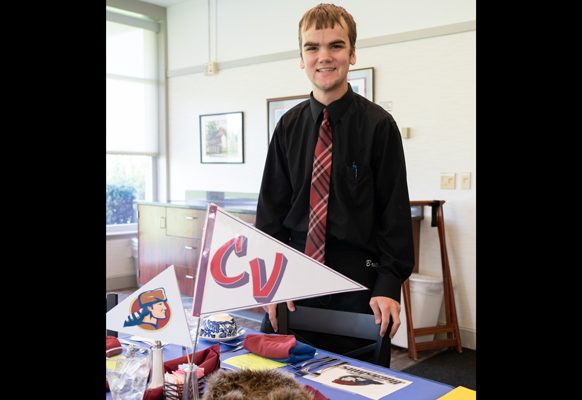 Brett Martin: will be attending YTI; goal is to become an executive chef. 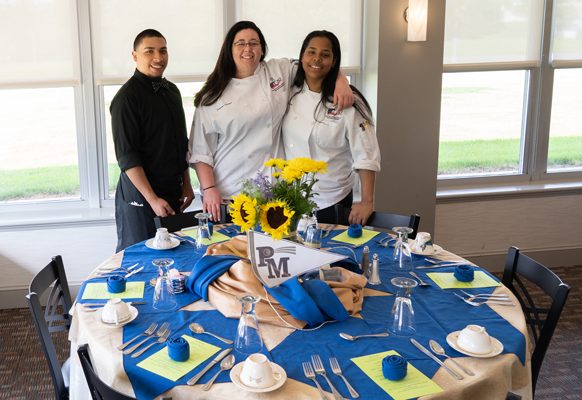 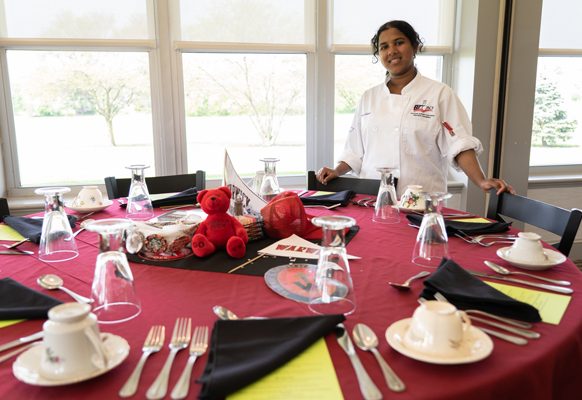 Brianna Lehmeir; goal is to work in the industry. 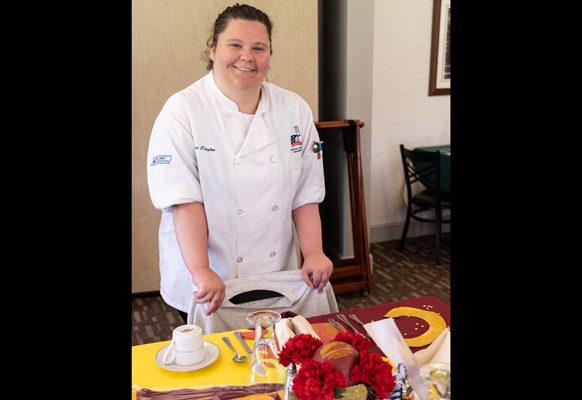 Jessica Clayton: plans to work in the industry and broaden her education. 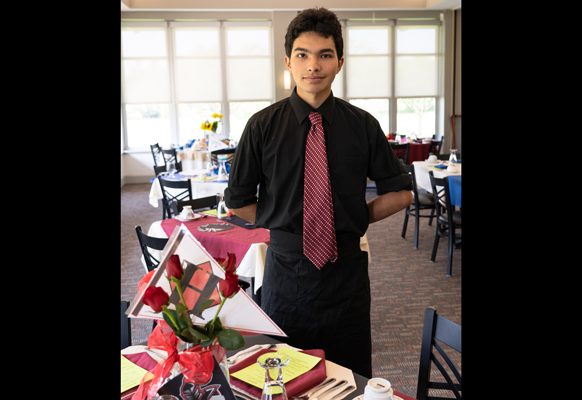 Xoan Perez: he plans to initially work in the restaurant industry and then attend college. 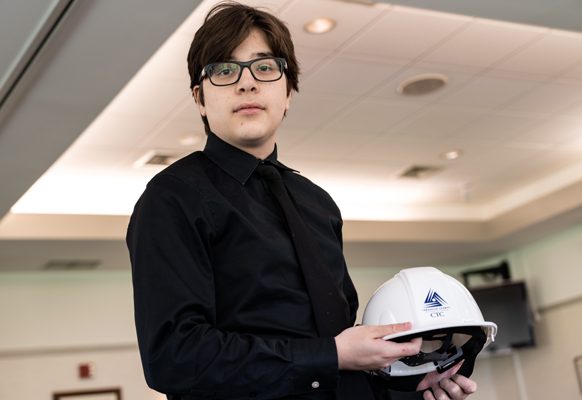 James Stoltzfus: will be taking a gap year in order to travel through Europe; his goal is to then attend HACC and take courses related to hospitality, plus become a certified mixologist/bartender. 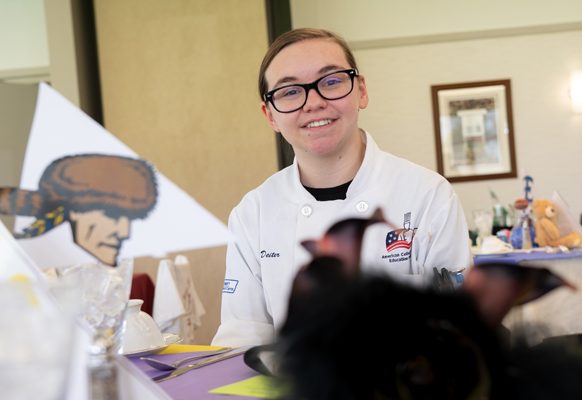 Juanita Dieter: plans to attend either YTI or HACC. 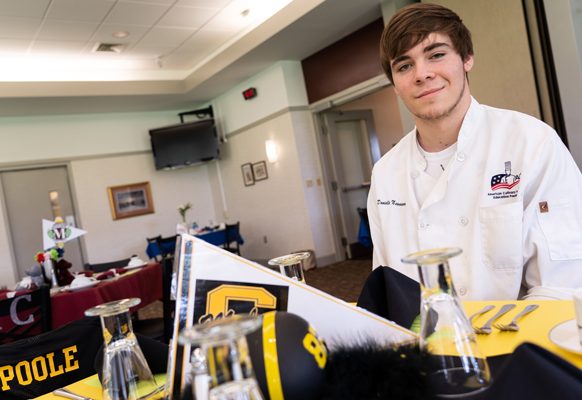 The LCCTC learning experience also includes projects like designing a food truck or a café. There’s also an Iron Chef-type competition. And, culinary arts students also participate in a number of charitable events such as catering the annual Fly on the Run (a fly-fishing tournament) that benefits the LCCTC Foundation. By January, students are planning the cakes they will enter in Hershey’s annual Chocolate Fest. Twice last year, the students prepared breakfast for events hosted by State Senator Ryan Aument.
Last October, students carved 60 pumpkins that were displayed as part of Hershey Gardens’ annual Pumpkin Glow event. “Students really had fun, but it was also a learning experience for them. When they leave here, they are food artisans,” Tracie observes, adding that customer service skills are also learned. 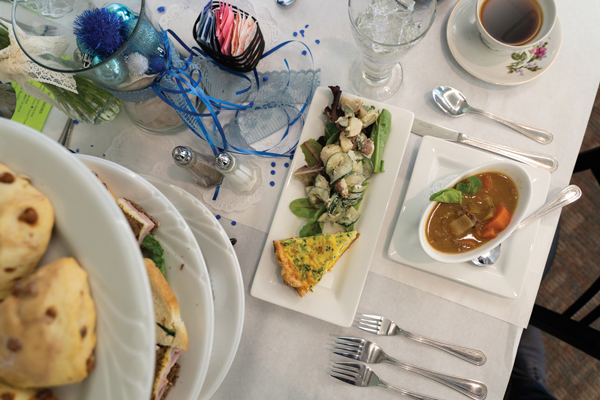 According to Tara, High Tea has become very popular; ladies in particular enjoy its social aspect. High Tea includes a selection of tea (usually a choice of two varieties; all teas are organic and fair trade), soup, salad and quiche, and the three-tiered tea tray. This piece de resistance is artfully presented and features scones with the appropriate accompaniment (tasty items such as cream, lemon curd or jam) on the top tier, assorted finger sandwiches on the middle tier, and a bottom tier with delightful desserts. All items are made in-house by students, and the focus is on organic ingredients and sustainability. “We also teach students how to taste things,” Tara adds. “There’s a difference between tasting and eating – it’s all about the flavor.”

The students’ progress is reflected in the High Tea. Early in the year, the teas have a set menu but soon become creative in that each week features a theme. “For example, in the beginning of May, we’ll have a Kentucky Derby theme, and our last High Tea of the year is really fun – it’s School Pride day, and students decorate the tables with their school colors,” Tara says. 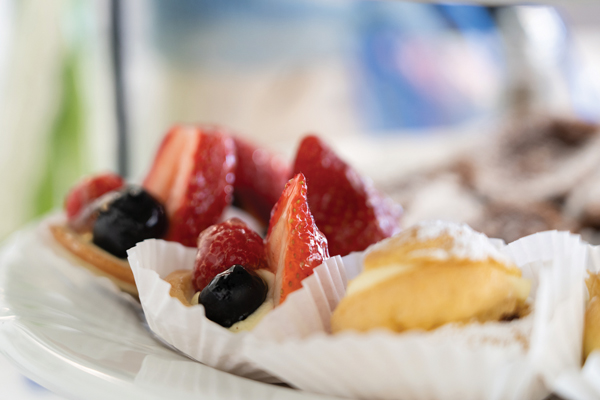 Tara urges the students’ parents to visit Infusions early in the school year and then visit again in late April or early May to really gauge the progress their children have made. “Students really mature and blossom – we teach them not only culinary skills but also people skills such as handling a customer complaint or taking a compliment,” Tara explains.

Infusions Restaurant is located at the Mount Joy Campus of Lancaster County Career & Technology Center, 432 Old Market St., Mount Joy. The restaurant /bakery operates October through mid-May (when school is in session). High Tea is served Tuesdays. Prix-fixe lunch menu is available Thursdays and Fridays (and Wednesdays later in the year). Gratuities are accepted and fund awards and field trips. Reservations are suggested, call 717-208-3127. Note: Payment is by cash or check only. 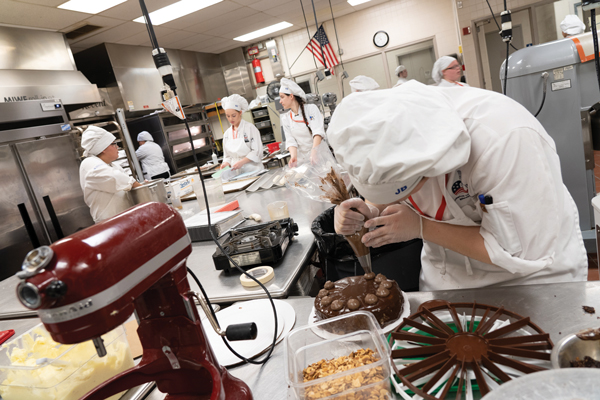