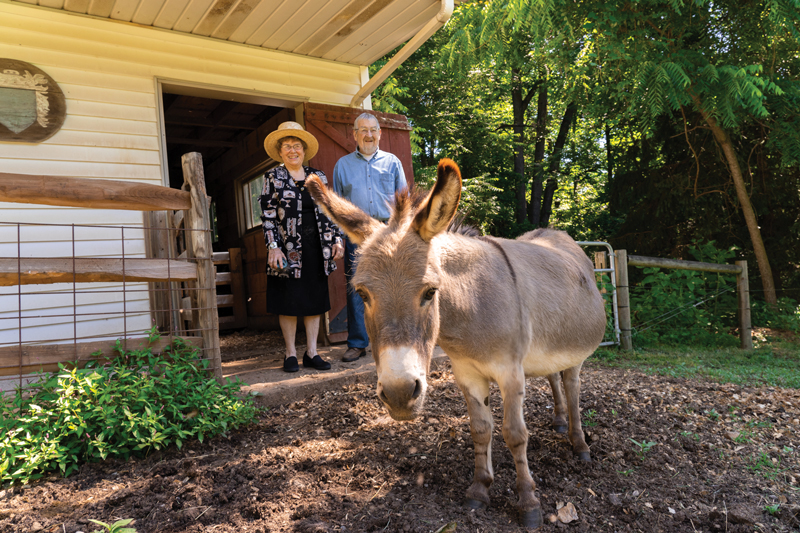 It is a scientific fact that pets can add years to our lives. But, sometimes those pets can enhance our lives in unexpected ways. Such is the case when a donkey named Josefina came into Pattie Longenecker’s life.

You might say that Pattie’s roots run deep. She can trace her lineage – on both sides of her family – back 10 generations. She added another branch to her family tree in 1966 when she married John Longenecker, whose own roots extend beyond Lancaster County and into Fulton and Dauphin counties. Their wedding took place in Spain, where John was stationed in the Air Force and Pattie was a teacher in Madrid. A year later, the couple returned to the United States in order for John to further his education at the University of Michigan while Pattie secured a teaching position nearby.

After living in michigan for seven years (where their children, Brad and Beth, were born), the Longeneckers returned home to Lancaster County. 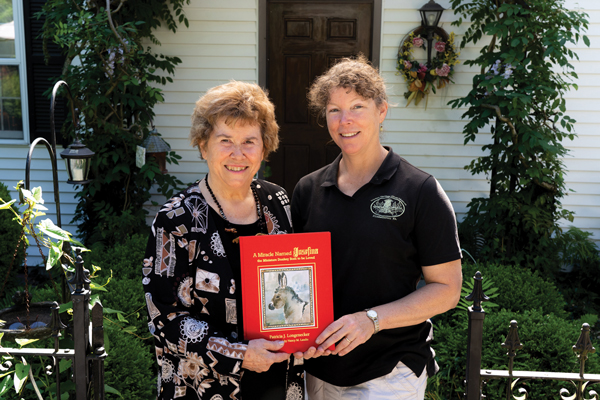 For the next two years, the family enjoyed a quiet, simplified life in Elizabethtown. However, they missed being surrounded by nature and decided to look for acreage on which they could farm and build a home. Finding the perfect spot near Falmouth, they named it Berry Patch Farm. “Berry Patch has been a labor of love,” says Pattie, who launched a very successful wreath-making business there and became a student of sorts, as she learned and shared all she could about the nuclear accident that occurred at nearby Three Mile Island in 1979. 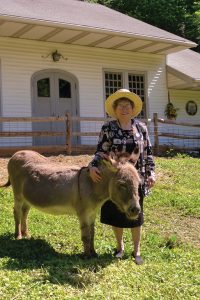 While she has many interests, Pattie remains devoted to her family and its heritage. The Longeneckers’ home symbolizes their combined family trees, as each room is decorated with bits and pieces of family memorabilia. As she moves about the house, Pattie engages in a running commentary: “There’s Grandpa’s favorite arm chair … Grandma’s little step stool, which Mother and Grandma would stand on to wash the windows each spring and fall … and here are the ceramic door knobs from John’s grandmother’s home before it was torn down.”

Three of their favorite “keepsakes” can be attributed to Grandma Helen (John’s mother), who harbored a fondness for donkeys throughout her life. Hoping to rally Helen’s spirits while in the hospital during a serious illness, the family purchased two miniature donkeys for her. She named them Jack and Jill and dreamed of meeting them at Berry Patch Farm. Sadly, she passed away before she could do so. Jack and Jill became a part of Pattie and John’s menagerie.

The third component of Grandma Helen’s legacy arrived on New Year’s Eve, 1997, when Jill gave birth to a frail foal. Knowing the foal needed special veterinary attention, Pattie and John called in Drs. Joan and Boyd Henderson. The vets decided the newborn needed “intensive care” and suggested they take the foal to their home where she would receive special one-on-one care until she became strong enough to return to Berry Patch. 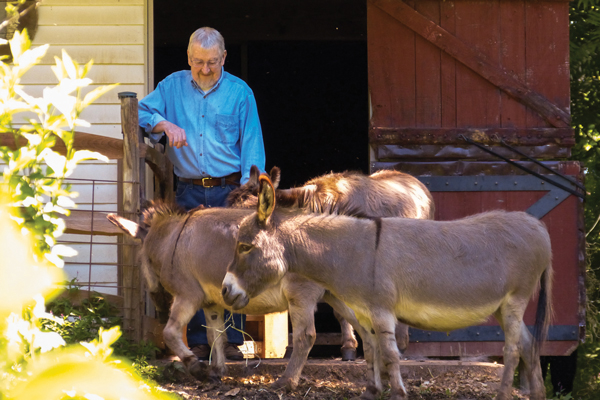 Initially, things looked very grim. It was doubtful the foal would survive. But, with the help and love of all the Hendersons – including Joan and Boyd’s daughters, Haley and Cassi – the foal rebounded. It was Haley and Cassi who named the foal “Josefina” (pronounced Hose-a-feena), which honors her Spanish heritage. “The name stuck,” Pattie explains.

When Josefina returned to Berry Patch Farm two weeks later, she made herself at home in the Longeneckers’ laundry room. John took charge of bottle feeding Josefina every four hours. She improved by leaps and bounds, prompting Dr. Joan to proclaim it was time for Josefina to bond with her parents and live in the barn. The transition went smoothly for Josefina – it was John who suffered from separation anxiety!

Pattie often thought that Josefina’s story would lend itself to a children’s book. (The Longeneckers’ grandchildren now dote on Jack, Jill and Josefina.) So, she set out to write a book that would tell Josefina’s story, as well as explain the nuances of raising donkeys. Her purpose was to also honor Dr. Joan, who passed away before it was finished. Pattie named the book, A Miracle Named Josefina, the Miniature Donkey Born to the Loved. 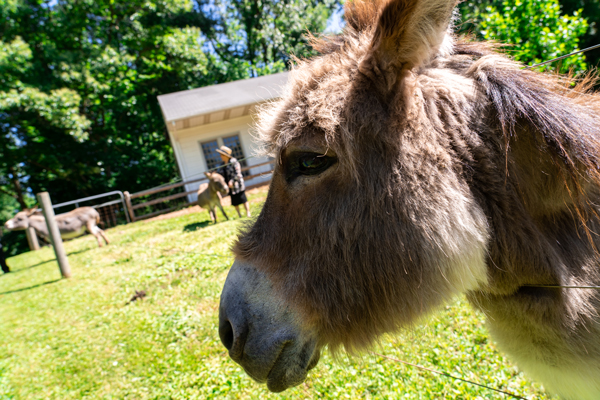 “Josefina’s story is one of inspiration, love and hope,” Pattie notes, explaining that the little donkey has touched many lives and has brought countless people into the Longeneckers’ circle of friends. 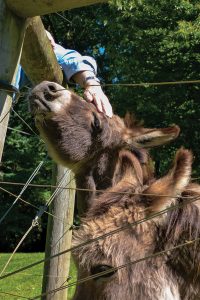 The book, which was published by CARACYN Publishing in Grantville, is beautifully illustrated by Nancy Landis, who brings Pattie’s animals to life with her very unique quality of capturing their character in watercolor.

Nancy, who is known locally for her Pennsylvania German Fraktur work, has been the executive director at the Winters Heritage House Museum in Elizabethtown for more than 12 years. According to Pattie, “This is not my book, but our book. It is a total partnership with Nancy to honor our mutual friend, Dr. Joan.”

It seems Pattie’s work as an author is not finished. She is working on a quick-rhyme companion book to the Josefina story; it, too, will feature more of Nancy’s illustrations. Pattie is also working on an autobiographical book, A Basket of Eggs, Water from the Well. Each chapter will begin with a favorite verse and will explore family values and what it means to have “a basket of eggs” and “water from the well” in your life.

“A Miracle Named Josefina, the Miniature Donkey Born to the Loved” can be purchased by contacting Pattie at bpatch38@comcast.net. They are also available through the Winters Heritage House Museum (717-367-4672) or Kopek Veterinary Associates (717-361-8700). 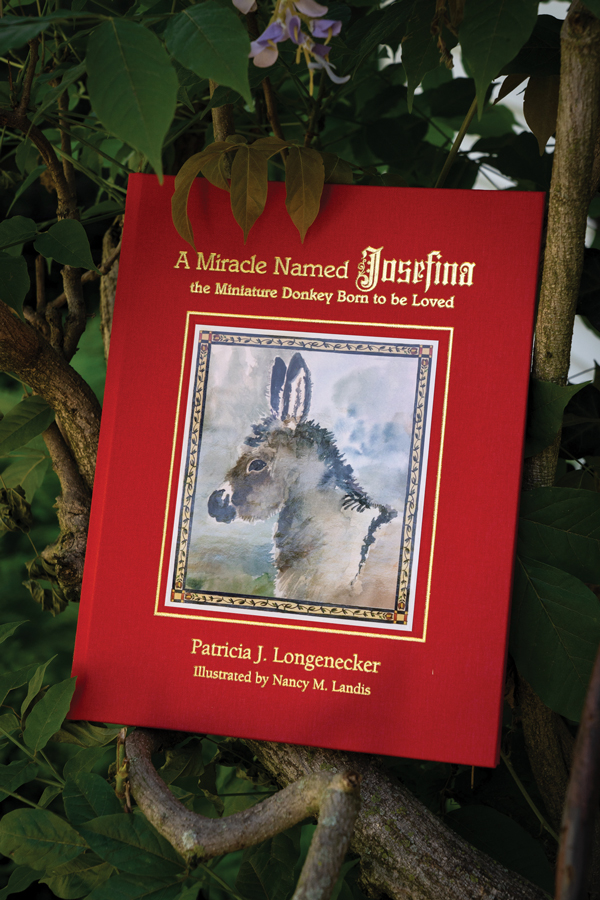