It’s September, and many of you are probably thinking about making trips to the mountains to enjoy the fall foliage. Have you ever considered a fall getaway to the beach? If you head south to Virginia, the Carolinas and beyond, you’ll find the weather is great, the water is warm, fishing is fantastic and, best of all, the crowds are gone. Plus, there’s fall color: The dune grasses take on a golden glow.

After years of going the “shore” route, my family made a trip to the Outer Banks of North Carolina in search of something different. Indeed, the contrasts between the Outer Banks and our more familiar boardwalk beaches were striking. When I returned years later – in 2008 – as an adult, we headed north on NC12; that’s when the focus of my beach trips permanently changed from Wildwood to wildlife.

The Outer Banks is a string of barrier islands, peninsulas, and spits that stretch 200 miles from the southeastern tip of Virginia to Ocracoke Island in North Carolina. They’re separated from the mainland by a series of sounds. In some places the islands are so thin that you can simultaneously see the sound and ocean as you travel the only north/south route, NC12.

The Outer Banks has been in the news this summer due to a pop-up island that has taken shape off the point of Hatteras Island. Because of the array of shells that wash up, it’s been dubbed Shelly Island. And, of course, the construction disaster that disrupted power to the lower islands – causing mandatory evacuations for visitors – dominated the news in late July and early August.

Coming from the north, you’ll likely make your way across the Currituck Sound via the NC158 Wright Memorial Bridge, which takes you to NC12. From there you have the choice to go north to towns like Duck and Corolla, or south into the more densely populated areas like Kitty Hawk, Kill Devil Hills and Nags Head.

Does Kitty Hawk sound familiar? It’s home to the Wright Brothers National Memorial, which is on the site where Orville and Wilbur first took flight. Go a little farther south into Nags Head, and you’ll spot ant-sized people hiking (or hand-gliding) over the giant dunes of Jockey’s Ridge State Park. Being that the stretch between the two mainland bridges is so populated, this area also offers the most shopping, dining, entertainment and recreational activities.

Shortly thereafter you can pick up US-64, which turns westward toward Roanoke Island, the home of the historical drama, The Lost Colony. This summer marked the production’s 80th season, and here’s some trivia: It’s where Andy Griffith launched his acting career.

Continuing south on NC 12, you’ll cross Oregon Inlet (home to the Discovery series, Wicked Tuna/Outer Banks) and enter Hatteras Island, which is home to the Cape Hatteras National Seashore. Officially established on January 12, 1953, it is recognized as the country’s first national seashore.

This is where the wind meets the wild, allowing the National Park Service to manage and preserve over 70 miles of the Outer Banks from Bodie Island to Ocracoke Island. Small towns, such as Waves, Rodanthe (yes, the movie, Nights in Rodanthe, was filmed on the Outer Banks), Avon, Buxton, Frisco and Hatteras Village, dot the length of the island.

It’s a popular area for camping, fishing, driving on the beach and other outdoor recreation. Hatteras Village offers the closest proximity to the Gulf Stream, making it a popular destination for fishing excursions. A stretch of ocean known as the Graveyard of the Atlantic is offshore, making it a favorite of divers in search of wrecks to explore. The island’s position in the Atlantic also makes it a prime place for surfing and lighthouses.

That’s right, this area is home to three of North Carolina’s seven beautiful coastal lighthouses: Bodie Island Lighthouse, Cape Hatteras Light Station and the Ocracoke Lighthouse. Proving the fragility of the Outer Banks, in 1999 the Cape Hatteras Light was moved 2,900 feet inland as beach erosion left the lighthouse just 15 feet from the water at high tide. That was a tall order for the tallest brick lighthouse in the country, but the effort is truly appreciated by the thousands of visitors who climb the 257 steps to enjoy the jaw-dropping panoramic view.

Once you reach Hatteras Village, you’ll need to board a ferry and pick up NC12 in Ocracoke.

Ocracoke’s claim to fame is being the favorite hangout of Captain Edward Teach, who is otherwise known as Blackbeard, the infamous English pirate. One of these years, I vow to make it to Ocracoke.

Ocracoke is a haul from our favorite vacation spot on the northern banks. It’s a very different feel from the southern islands. Shortly after turning north, the road quickly becomes two lanes with no passing (a stark contrast to the five lanes heading south). That’s because this area went basically undeveloped until the mid-80s. It was in 1984 that work began to expand NC12 north to Corolla. As the road expanded, so did the communities, and the modern towns of Duck and Corolla began to take form. Driving north, the landscape is dotted with brightly colored beach homes and condos. In both towns, shopping, dining, tours, entertainment and other tourist services are generally clumped together in shopping centers. A warning to first-timers, fast food isn’t really a thing here.

As you’re making your way through Corolla, you’ll spot the red brick Currituck Beach Lighthouse above the horizon. After braving the 220 steps and a 150-foot climb, this is yet another lighthouse on the Outer Banks with a very rewarding view over Historic Corolla Village. Within the vicinity, you will also find the Outer Banks Center for Wildlife Education (great for rainy days with the kids) and Whalehead, which is a beautifully restored 1920s Art Nouveau-style residence that is open to the public for museum tours. This is one of the places we stop to let some air out of the tires for the last leg of our annual journey.

As we turn back onto NC12, there are a few more shops, a pizza place, wild horse tours and the last chance for gas. After a few more twists and turns, you begin to see the warning signs. You also begin to notice the road is filled only with pickups, hummers, jeeps and SUVs. Traffic slows before the final bend as the pavement stops and the sand begins. This is the beginning of the 11-mile stretch to the Virginia border known as the 4×4 Beach. This is the only route to the group of communities generally known as Carova, which extends to the Virginia border.

This is wild horse country. In the years following World War II, the local equine population outnumbered humans 100 to 1 at times. This remained true until development began in neighboring Corolla. The exact origin of the local wild Spanish Mustang population is unknown, but it is believed the herd’s ancestors were left behind by early Spanish explorers in the mid-1500s. Another theory holds that they swam ashore in the aftermath of shipwrecks.

As visitation to the northern Outer Banks exploded, the wild horses were driven farther north, prompting fences to be erected at the Corolla and Virginia borders. The year-round residents of Carova wanted to ensure that their area stayed wild and, as a result, the 4,570-acre Currituck National Wildlife Refuge and the 965-acre Currituck Banks National Estuarine Preserve were established. Paving the roads would be impossible.

There is also a ban on commercial buildings, which guards against stores or resorts being built in the area. As a result, this is arguably the final frontier on the Outer Banks; the scenery consists of beach, sound, woods, houses and a local fire department. The habitat provides a home for local wildlife, while controlling visitor impact.

While the wild horses are a magical addition to a stay in Carova, it should be noted that it is illegal and dangerous to get with 50 feet of them. With a keen eye, you’ll be able to observe some other wildlife as well. In addition to the horses, I have also seen fox, wild boar, tree frogs, crabs, and many bird and fish species while staying in this area.

During the day, we typically pull up onto the beach and set up camp or take the kayaks back to the sound. The Carova Beach Park and Boat Ramp is a nice place to relax and watch the sun set or drop a lure, depending on the season. A walk on the beach on a clear night provides a full view of the Milky Way with the naked eye, while a walk before sunrise becomes a hunt for the ocean’s treasures that have washed ashore.

I typically summarize our visits as a relaxed environment with a touch of wild. Things move a little slower on this end of the banks, and it’s just the rest and relaxation we’re looking for when we head to the beach. September can’t come soon enough! 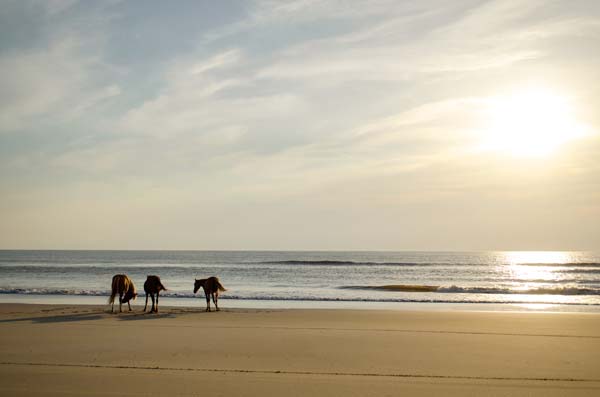